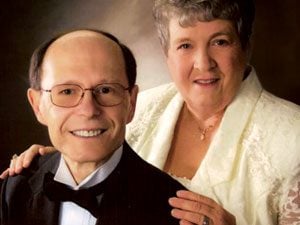 Courtesy Linda Richter
Tim Richter and his wife, Linda, had taught for over 30 years near Buffalo, New York—he in computers, she in special education. “Teaching means everything to us,” Tim would say. In April 1998, he learned he would need a quadruple bypass. It was the kind of news that leads to some serious thinking about life’s purpose.

Not long after the surgery, Tim saw a brochure describing Imagination Library, a program started by Dolly Parton’s foundation that mailed a book every month to children from birth to age five in the singer’s home county of Sevier, Tennessee. “I thought, Maybe Linda and I could do something like this when we retire,” Tim recalls. He placed the brochure on his dresser, “as a motivational thing.”

Five years later, now retired and with that brochure still on the dresser, Tim clicked on imaginationlibrary.com. The program had been opened up to “affiliates,” partners who could take advantage of book and postage discounts.

The quality of the books was paramount to the Richters. Rather than sign up online, they packed their bags for Dollywood for a look-see. “We didn’t want to give the children trash,” says Linda. The books—reviewed each year by teachers, literacy specialists, and Dollywood board members—included classics such as Ezra Jack Keats’s The Snowy Day and newer titles like Anna Dewdney’s Llama Llama series.

Satisfied, the couple set up the Richter Family Foundation and got to work. Since 2004, they have shipped more than 12,200 books to preschoolers in their area. Megan Williams, a mother of four, is more than appreciative: “This program introduces us to titles I’ve never heard of.”

The Richters spend about $400 a month sending books to 200 children. “Some people sit on their fanny and wait to die,” says Tim. “Others get as busy as they can in the time they have left.”