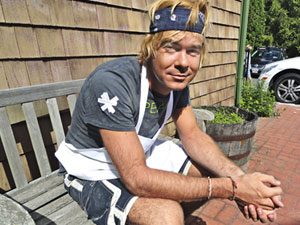 On the way home from his job at a bakery in Wainscott, New York, one August evening, Craig Schum, 33, stopped his car at the East Hampton Airport. A group was protesting airplane noise, and Schum, who had kicked off his shoes, got out of the car.

Within seconds, though, Schum saw something astonishing: A small plane dived and crashed into the woods about 100 yards from the runway. “I don’t remember making the decision that I should go help out,” he recalls. “I just started running.”

Schum sprinted across the street barefoot, scaled a six-foot-high chain-link fence, and dashed about 100 yards toward the woods. When he got there, he discovered 51-year-old pilot Stephen Bochter—his head bleeding­—beside the burning plane. Bochter’s passenger, his fiancée, Kim Brillo, was on the ground, unconscious. “She had blood all over her,” says Schum. “I thought she was dead.”

Jack Gleeson, 17, a high school student working a summer job at the airport, caught up to Schum and, with Bochter’s help, hoisted the chain-link fence and brought Brillo underneath it. Moments later, the entire plane exploded.

After the paramedics arrived, Bochter and Brillo, 34, were airlifted to a nearby hospital and treated for cuts and bruises and Brillo’s broken arm. Bochter, an experienced pilot, later said that the plane’s electrical system had failed shortly after takeoff. He had been attempting to land at the East Hampton Airport when the plane began to nosedive. He managed to level the wings before crashing into the woods.

“Everything was on fire, and [Schum] came out of nowhere to save us,” says Bochter. “We’re blessed to have lived through it.”