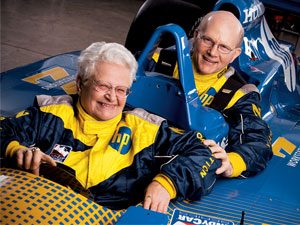 Courtesy Andy Goodwin
If anyone has a connection to Al Pacino, please get in touch with Bob Haverstick ASAP. There’s a 77-year-old woman in Manhattan who’d like to have coffee with the actor—she’s a big fan—and Haverstick is on a mission to make her wish a reality.

Over the past ten years, through the nonprofit he founded, Never Too Late, Haverstick has granted more than 1,900 such wishes for senior citizens and terminally ill adults around the country. He sent a 93-year-old woman (“a whizbang ballplayer when she was young,” he says) to physical therapy so she could hit a baseball one more time, at an Indianapolis Indians game. (“She hit that ball, and the crowd went wild,” he reports.) He hired a nurse and an ambulance to transport a dying mom to her daughter’s high school graduation. He even finagled a meeting with Bill Cosby for a man who’d learned to read at the age of 70 using Cosby’s Little Bill books.

Haverstick, 62, and dozens of volunteers figure out the logistics. “Some wishes take one phone call,” he says. “Others have us going through back doors and over the wall, making a tunnel, connecting dots, and doing whatever it takes.”

Haverstick’s toughest challenge came from Lucious Newsom, a minister—“the Mother Teresa of Indianapolis”—who told Haverstick that he wanted help feeding hungry families in the neighborhood as a way to celebrate his 90th birthday. “His list of families was huge,” recalls Haverstick, “but we got churches involved, people called Kroger and Walmart for us, and checks started coming in. We ended up collecting 1,250 bags of groceries. The night before, I was up wondering how we’d get all those bags delivered.” But they did.

Last year, Never Too Late (nevertoolate.org) spent about $70,000 fulfilling wishes, at an average of $300 each. Haverstick relies on a steady pool of donors, as well as silent auctions and golf outings. Whether someone’s wish involves a tractor or a plane, Haverstick can almost always find a loaner.

Haverstick’s wish-granting idea started much smaller and more local, near his hometown of Indianapolis. “Back in the late ’90s, I was looking for a sense of purpose for the second half of my life,” he says. As a marketing director at a computer software company, he’d gotten a taste of what it was like to grant people’s wishes while managing the firm’s community outreach program. In January 2000, he began soliciting wishes at the nursing home where his mother-in-law had lived out her last days.

Haverstick wasn’t prepared for the first problem he encountered: getting people to actually cop to their wishes. “I’d forgotten this is the Greatest Generation,” he says. “They are proud and independent. They are not about to raise their hands and say ‘gimme.’ I have to tell them that this isn’t charity. This is a way of saying ‘Thank you for your years of dedication and commitment.’ ”

Eventually, the wishes began rolling in. Every wish, though, has to be reasonable and affordable. “Sometimes,” he says, “someone will tell us, ‘I want to pay off my mortgage so I can be a full-time minister,’ and we say, ‘Good luck with that.’” More often, the wishes come from the heart—and can be surprising even to immediate family members.

While Haverstick got the charity off the ground, his wife, Cathy Kane, supported him financially. “I don’t take any money for this,” he says. “Cath has been there for me all these years while I get to go out and sprinkle happy dust on people.” Asked about his own wish, he says, “This is it. Living vicariously through all these wishes was my dream.”