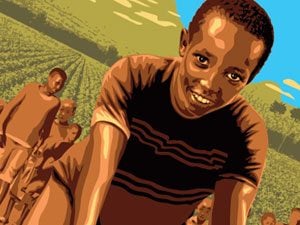 He works with the energy and intensity, if not the skill, of a mechanic twice his age. He keeps his head down, focusing on his task, talking to himself—threading greased pedals onto one of 120 sturdy black bikes we’re here to build and donate to a Rwandan charity so people can ride to work, to school, to a well with clean water. He looks to be the same age as my third-grade twins. We’ve been working together for an hour in a small auditorium in a walled compound outside Kigali. A choir practices somewhere outside, the ethereal music blending with the clouds that descend down the green ravines of the hills that define Rwanda. Although he speaks no English and I no Kinyarwanda, we use the universal signs of thumbs-ups, head nods, and “no problem.” We work as a team.

And we smile. A lot. The kid has a smile like no other I’ve seen in more than six years of working with African relief agencies to build and donate bikes to charitable groups. I’ve seen lots of hard workers. Lots of incredible people. But there’s something about this one that has a hold, quite unexpectedly, of my heart, more so than the other kids working with volunteers around the compound.

Maybe because he’s about the same age as my own three children, a world away in an American suburb. Maybe it’s his warmth, laid bare by a complete absence of any artifice. His eyes glow and his teeth sparkle, and my jet lag melts away as this kid, whose name I don’t know and can’t seem to find out, beams with pride and happiness at finally getting the pedals onto the bike. I give him a thumbs-up, and he beams anew. Over the course of this humid morning, we’ll assemble 15 or so bikes, half of what I could do working alone. But I have a new friend.

And he likes me. Anytime we stop work so I can explain something to him, he holds my hand. When we stop for tea, he holds my hand again, and I slip him some Skittles. A woman in traditional dress comes over, ignoring me, and speaks to him sharply, then raps his hand. I’m shocked, but parenting methods are different in central Africa than in New Jersey, so I say nothing as he struggles to hold back tears. Then he takes my hand and pulls me back to the bikes. Within two minutes, he’s beaming, and this time, I’m the one trying to hold back tears.

At lunch, I tell Jules Shell, the director of Foundation Rwanda, the charity group we’re working with, what a great hustler we have on our hands. I ask again what his name is. She says, “Well, we call him Jean-Paul. But he doesn’t have a real name.”

I must look confused. She smiles a little. “I don’t think his mom could bring herself to call him anything at the time.”

I don’t get it, but she continues. “How old do you think he is?” she asks.

She looks at me with the tired eyes of a relief worker exhausted by explaining the unexplainable. “He’s 16,” she says. I say it can’t be; he’s tiny. “Sixteen. All these kids are. The genocide was in 1994. Do the math.” 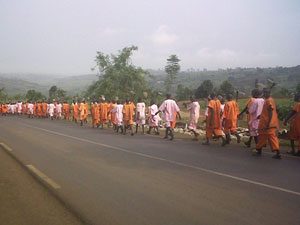 Courtesy Stephen MaddenPerpetrators of the genocide
The boy, like the other children here, was born of rape. His mother, a member of the Tutsi tribe, was raped during the 1994 Hutu genocide that slaughtered some one million Rwandans. Raped by a gang of militia who killed her three brothers, she considered an abortion but bore the child. In tribal Rwanda, however, she wore the birth like a scarlet letter, victimized twice as she suffered the brutal crime, then was rejected by her own deeply conservative family. Is it any wonder she couldn’t bring herself to properly name him? Bad enough she should have the daily reminder of the horror she suffered. “I care for him, but I can’t love him,” she told Jonathan Torgovnik, in 2007, when he and Jules started Foundation Rwanda. “I am not interested in a family. I am not interested in love. I am physically handicapped because of the beatings that I went through—I can’t carry anything. I can’t work. It’s good I didn’t kill that boy, because now he fetches water for me.” Jules says she thinks his diminutive size is most likely the result of malnutrition.

As we eat, a chain gang of convicts in bright jumpsuits walks by the compound, shovels and pickaxes in hand. They are convicted murderers, the perpetrators of the genocide. They walk by their victims twice a day. Some of the convicts jeer.

After lunch, I can’t look at the boy in the same way. I just can’t reconcile the horror of his conception and life, utterly without love, with his sunny countenance and sweet demeanor, his exuberance. This child has every reason to hate yet greets the world with love. I think of my own children, who get everything by simply asking for it. Everything except love, that is. That they don’t have to ask for; they automatically receive it and return it. What would this kid’s life be like if he were loved the way Kit, Chris, and Luke are? 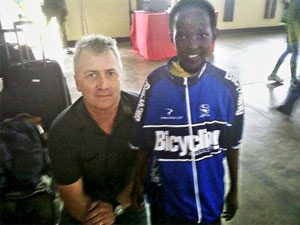 Courtesy Stephen MaddenThe author with 'Jean-Paul,' whose appearance belies his age.
He goes at the bikes with the same intensity he did all morning, the quality of his work getting a little better, a little faster, with each passing build. And when I decide to take a break around 3 p.m. and try to wave him over for chai and Skittles, he just smiles and keeps on working, even if the bicycle pump continues to confound him.

Asking a child (or even an adult) to assemble bikes all day without riding one is tantamount to torture. So around 5 p.m., I take him outside with a bike I know to be assembled properly and gesture for him to get on and have a spin. The gestures don’t work, so I ask a translator to tell him to go for a ride. His eyes grow solemn at the news, and although the bike is built for someone half again as tall as he is, he gamely throws a leg over and wobbles down an alley and around the corner.

As I stand there with a three-way wrench in my hand, a wave of fatigue sweeps over me. I think of the warm Sunday September afternoon a few years before when my son, Luke, insisted I take the training wheels off his bike. He then promptly mastered two wheels and spun away from me down our street. In one of the great paradoxes of parenthood, I had just taught him the means to leave my side. It was as if I had said, “I love you so much, I will teach you how to leave me. Because if I’ve done my job right, you’ll always ride back.”

Maybe it is the jet lag, or maybe the tea is wearing off, but my eyes fill with tears. I wipe them away and look down the alley, waiting for him. But there’s no sign. He isn’t there. I imagine him riding away from here to a place where his love will be returned and his warmth valued. Just riding away, for good.

Suddenly a bike slams into my right leg; I drop the wrench. He’s there, having circled the building, the compound. Laughing out loud, feet on the ground, he takes my hand and beams.