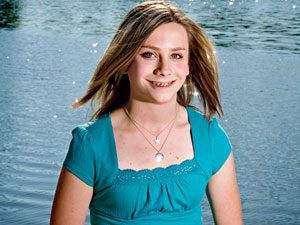 Greg Ruffing/Redux
Carly Zalenski’s eyes filled with tears as the dusty bus rattled down a dirt road in southern Vietnam. The 14-year-old and her family had traveled by plane from Canton, Ohio, to Ho Chi Minh City and then by bus deep into the Mekong Delta. Now, as they approached the village, hundreds of cheering schoolchildren lined the entrance to the Hoa Lac School, a two-story concrete building that Carly had raised money for.

Carly started helping others when she was eight, handing out Thanksgiving baskets at church to families in need. It was a snowy day, and she saw that one girl was wearing flip-flops and others didn’t have warm coats. The next November, she went door-to-door asking for used coats, hats, gloves, and scarves, then handed them out with the baskets.

But Carly wanted to do more—she wanted to “change lives,” she says. She remembered that her grandmother’s Rotary club had, years earlier, raised money to build a school in Vietnam. That was it, she decided. She’d build a school too.

She put together a PowerPoint presentation on the people and culture of Vietnam. At 12, barely able to see over the podium, she gave her first fund-raising pitch. Though her new braces made it hard to enunciate, she spoke with enthusiasm. “The kids in rural Vietnam don’t have decent schools,” she told a room of 200 Rotarians. “That’s not fair. I want to give them a place to make their lives better.”

That summer, Carly set off with her family across Ohio, visiting three or four Rotary clubs a week. “We traveled like crazy people to all these meetings,” recalls her mother, Kris.

The first few sessions yielded no donations. But one night, Carly and her dad, Fred, pulled up to a rundown building in Minerva, Ohio. Carrying a laptop, a projector, and a portable screen, they traipsed through a bar to a darkened back room where 15 Rotarians were sitting around a long table. There was dead silence and blank stares after Carly had finished. Fred thought, This is never going to work. Then someone made a motion: “Let’s give this girl a check right now.” Minutes later, an elated Carly walked out with her first donation: $500.

Not everyone was wild about the idea of giving back to a Communist country. “Why should we help Vietnam?” asked one veteran. Carly replied simply, “They’re kids. And I’m just a kid who wants to help out.”

As word spread, individual donors sent checks for as little as $5. A restaurant chain contributed $1,000. Carly’s karate teacher organized a tournament that netted $4,000. A Bible camp chipped in to help buy 500 backpacks for the children.

In two years, Carly had raised $50,000, a sum that was matched by the Vietnam Children’s Fund. At the dedication ceremony in Hoa Lac, the school principal was impressed with the ninth grader. “How wonderful,” he said through a translator, “that a girl her age wanted to do something for kids so far away.”