Illegal loggers are slowly tearing down the forest, destroying the landscape and habitats. This couple is on a mission to stop them. 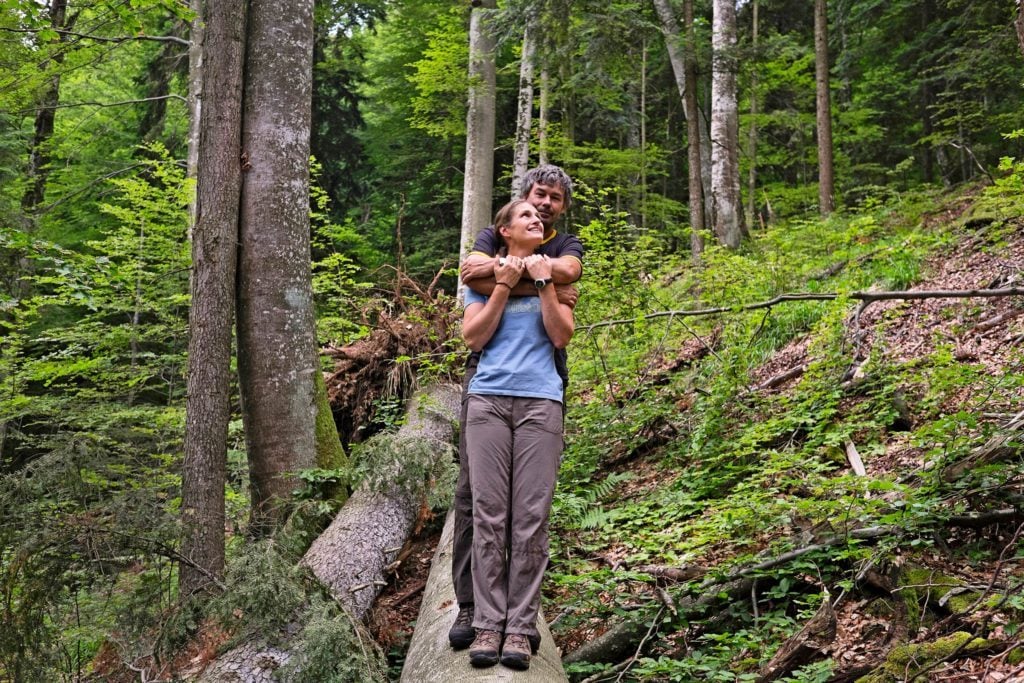 photographed by david ellicson/RDIEChristoph and Barbara Promberger were hiking through the virgin forest one summer morning in 2007. The sun was shining and birds were singing high in the trees. Occasionally the undergrowth rustled with the movement of unseen animals.

MORE: Why Hiking Is One of the Best Things You Can Do for Your Brain

They were deep in Romania’s Piatra Craiului National Park, part of the Carpathian Mountains, a range that forms a 1,500km-long arc that stretches through seven countries. It is home to some of Europe’s rarest large mammals: the wolf, the lynx, and the brown bear, as well as wild boar, deer, eagles, rare frogs, bats and mice, and numerous other species. 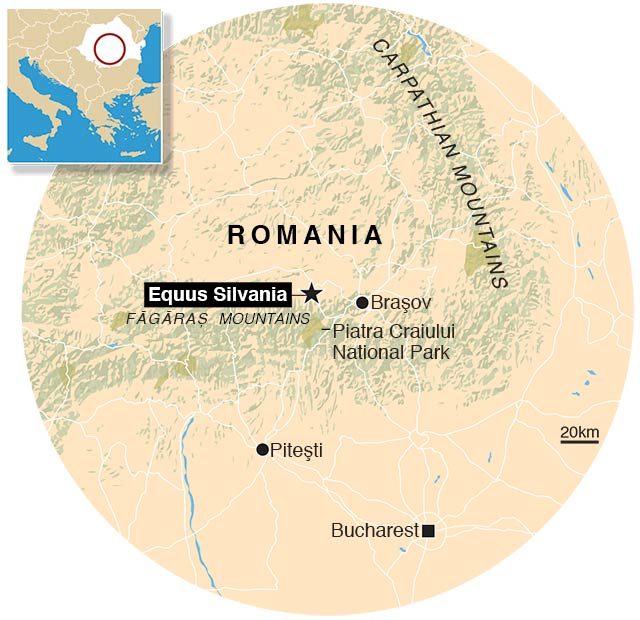 map by acute graphics The Carpathians hold the continent’s largest remaining areas of virgin forest outside of Russia, yet all was not well in this vast haven of biodiversity.

The park’s director, Horatiu Hanganu, walking with the couple, somberly described the destruction taking place around them. Vast tracts of woodland, unchanged for thousands of years, were vanishing, eaten up by the biting teeth of power saws as unauthorized and illegal logging cut swathes through the forest.

And then, on the other side of the mountain, they came across a scene of carnage. Illegal loggers had ripped through the forest, destroying trees and flora along with the nutritious soil that fed them. Few birds were singing because there were no trees for them to nest in; there were no animals because the undergrowth protecting them had been torn away, leaving a scarred, broken landscape.

“I felt sick to my stomach that someone could do this to such a beautiful place,” says German-born Christoph, 50. “It broke my heart,” adds his Austrian wife, Barbara, 41.

“If you care at all for nature and for the conservation of our environment, then you cannot tolerate such scenes.”
But that day in the forest proved to be a life-changing moment for the couple, propelling them on a mission to save this mountain wilderness for future generations.

Christoph and Barbara had first come to Romania in 1993, as biologists on a project to study the large carnivores that thrive in the Carpathians. They had married five years later in Austria after falling in love during their nocturnal charting of the region’s mammals.

The Prombergers’ study of the region’s carnivores ended in 2003, but by that point they were in no mood to return home. “We loved Romania so much that we wanted to stay on,” says Christoph. So they founded Equus Silvania, an equestrian centre and guesthouse just 15 miles from the national park area they had grown to love.

“We thought of a place that would incorporate Barbara’s love of horse riding with the possibility for watching wildlife, together with a self-sustaining farm. It is an equestrian centre, but is so much more than just that.” 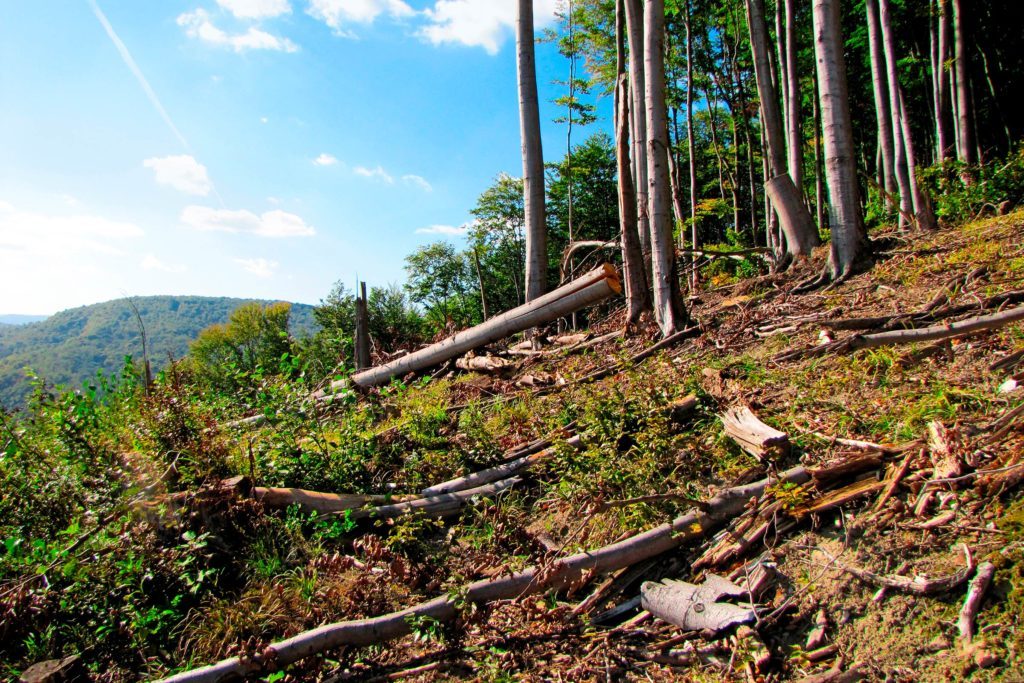 shutterstock /inna tesHere, a three-hour drive north of Bucharest, they brought up two daughters while also tending to 35 horses. They kept pigs, chicken, geese, and ducks and grew a large variety of fruits and vegetables.

MORE: How Horse Saddles Are Changing the Lives of Disabled People

But the lack of management of the surrounding countryside was an ever-present concern to them.

In 2004 the Romanian authorities began to hand back land seized by the state to the families who once owned it. In a desperately poor region, it was an invitation for locals to give their land over to the men with the chainsaws. The loggers paid well for the spruce, fir and beech wood, which ends up in vast sawmills for the production of chipboard, laminate, flooring, furniture and pellets for stoves.

“Most of the local owners had little economic empathy for the land and were willing to sell it, or its resources, to the highest bidder,” says Christoph. For the forests, and the animals living in them, the change was catastrophic.

“The government showed little interest in implementing conservation laws,” says Barbara. “We both agreed that talking is all very well, but if you want to change something, action is needed,” says Christoph.

Christoph and Barbara felt helpless, but then came a stroke of luck. In 2007, a guest called Hedi Wyss visited their 10-acre retreat.

They talked with Hedi about the destruction to the forest and their heartfelt desire to halt further devastation.

“Hedi had already founded her own conservation organization and when we discussed what we wanted to do—save the national park on our doorstep from as much logging as possible—she was immensely enthusiastic.”

“Hedi told me, ‘My brother is the man to stop this!’” says Christoph.

Hedi was not exaggerating. Her brother just happens to be the Swiss biotechnics multi-billionaire Hansjoerg Wyss. The second richest man in Switzerland, 79-year-old Hansjoerg is listed by Forbes magazine as having a fortune of more than $6 billion.

Hedi arranged a meeting. Hansjoerg visited Equus Silvania and the four got to work.

“At that time our plan revolved around saving the Piatra Craiului National Park which was being ravaged,” says Christoph. “But Hansjoerg was already dreaming of much bigger things.

“He said he would help on two conditions. The first was that our original plan for the park on our doorstep was too small. He wanted it to ultimately encompass much more land.”

Hansjoerg’s second condition was that he did not want to be the sole benefactor. “We had to attract more people committed to this idea,” says Christoph. “He felt that such a big project should not rest on the shoulders of one person.

“So we thought about it, and decided we would go for it!” Shortly before Christmas 2009, Foundation Conservation Carpathia was born.

The quest they embarked upon was daunting. Facing them were sinister, gangster-like loggers, indifferent local police and corrupt bureaucrats who would rather take kickbacks than take on the criminals.

“We have had some pretty scary moments,” says Christoph. “We’ve had car tires slashed, and one of the forest rangers had his life threatened by a man who illegally grazed his cattle on land that was off-limits. It is a constant and ongoing struggle to change the perceptions of people to their environment.”

The plan was to raise the money to buy up parcel after parcel of forest land. Barbara and Christoph networked tirelessly, tapping into their conservation friends and contacts. 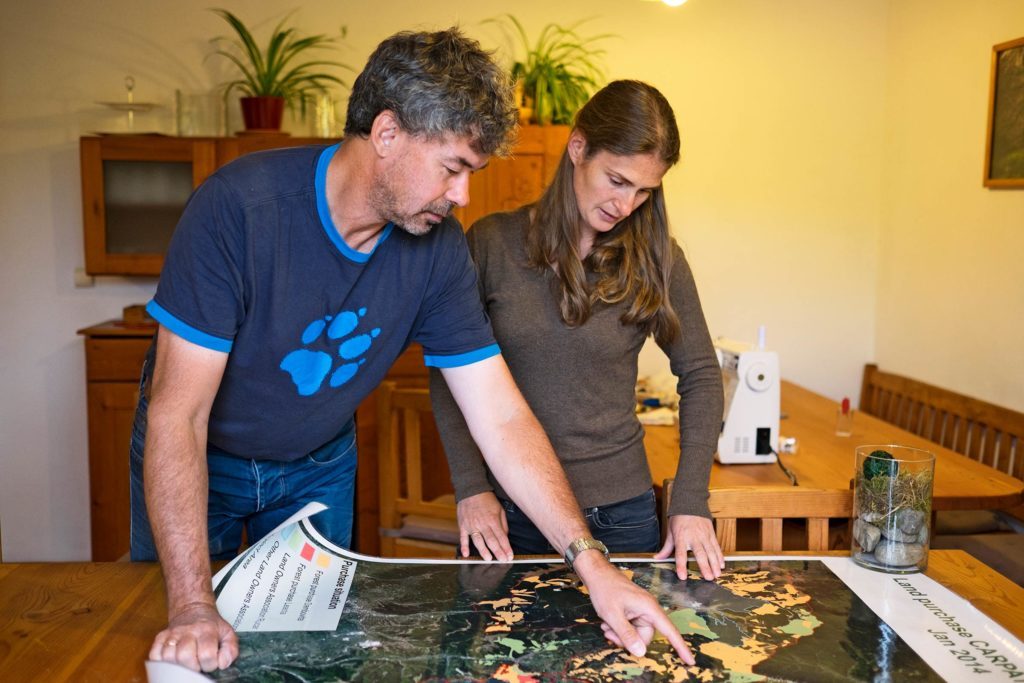 photograph by david ellicson/RDIEOver the past six years Christoph and Barbara have raised more than 50 million euros, chased the loggers out of vast tracts of the wilderness and saved 20,000 hectares of forest from the ravages of unchecked logging.

In the valleys cut by chainsaws the Prombergers and their helpers have planted new beech, elm, ash and fir trees to replace the behemoths leveled by the loggers for the furniture stores of the world.

“Can you imagine,” Christoph says, “these magnificent trees being felled and the land being scarred, the plants and the wildlife dying out, all because of some heating pellets and sheets of wood for a house somewhere halfway around the world?”

Today, a board of 10 people oversees the Foundation, which has some 35 employees, including 20 rangers who patrol the vast tracts of the forests to make sure no illegal loggers are tempted back. Christoph and Barbara are in day-to-day charge as co-CEOs.

“We receive funding from the Life Programme of the European Commission and from the Norwegian government in addition to donations,” says Barbara.

Among other things, the money helps to pay for the regeneration of areas where trees have been clear-cut. Such areas often suffer significant soil erosion because of the way logs are dragged down the mountains, tearing up the earth.

Christoph and Barbara are thinking big. The ultimate goal, in Hansjoerg Wyss’s words, is to create a “European Yellowstone.”

That is quite some challenge, as Irish environmentalist Lenny Antonelli observes: “The Plombergers’ project might just be the most ambitious and exciting conservation project in Europe at the moment… And if they succeed, this has the potential to become one of the largest wild areas in Europe.”

They have set their sights on a protected area of 200,000 hectares in the Fagaras Mountains near their home in the foothills of the chain.

“This is not just about stopping illegal logging, but all industrial-scale logging, where the profits do not go into the local community but into countries far away,” Christoph says. “We have chased the loggers out of the national park. Now we must chase them from the Fagaras range entirely.”

“We want to see small craft logging industries that would spin off into carpentry workshops. Sustainable agriculture. People benefitting at grassroots level from activities that do not harm the environment. It is unashamedly a completely holistic approach.”

That aspect is key, according to Lenny Antonelli: “If the project is to work in the long term, it’s crucial the park has real benefits for local communities — it can’t just be seen as a pet project for rich outsiders.”

Experts say the clearing by loggers amounts to three football-field size chunks of Carpathian forest every single day. Although attitudes among local people are slowly changing, the Prombergers say corruption and apathy are a continuing obstacle.

“Those who have got rich from illegal logging like to build gaudy weekend homes in the forest without gaining planning permission. This puts more strain on watercourses and wildlife. There is still corruption, there is still a mafia at work. But things are changing for the better.”

The Foundation’s ultimate goal is one day to donate everything back to the people of Romania. But that will happen only when the state is in a better shape to manage it. Christoph says the country has 13 national parks, but they are poorly funded.

“When we first embarked on this there was little government interest in implementing conservation laws,” Barbara says. “Romania stands alone within the European Union in not providing a separate budget for protected areas.

Fortunately, there are signs of change. A year ago Romania’s parliament approved a new forestry code aimed to curb illegal logging and make it easier for smallholders to make money legally from their forest land. The country’s anti-corruption agency is also investigating some officials in the state forest administration.

Meanwhile, the Plombergers’ work goes on. Christoph is resolute, saying, “We are committed to this project, along with all our backers, to make this the most important, and biggest, natural park in Europe.”