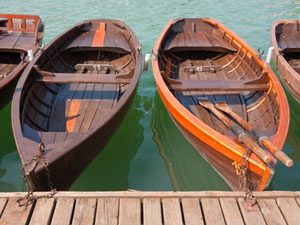 The Pacific Ocean earthquake on March 11, 2011 did more than devastate Japan; it also generated a tsunami that pounded California’s coast, destroying Crescent City’s Harbor District. Since Crescent City relies heavily on the harbor for recreation, tourism, and commercial fishing industries (one of the area’s key economic engines), “the community realized it had to come together and work together… to come back,” said Charles Slert, the town’s mayor.

Crescent City received a $5 million National Emergency grant to fund a labor force of 350 for Harbor District cleanup, but none of the money could be used for materials. “It was quite a unique situation,” explained Slert. “We had a labor force and the man power, but no materials.”  Fortunately, Crescent City ‘s citizens had rounded up enough votes in the We Hear You America campaign to earn a $10,000 award just after the tidal wave hit. The town decided to use the prize money to buy rebuilding materials from local vendors.

“We’re very honored to be awarded this generous contribution from Reader’s Digest and it made a difference in our timely recovery from the tsunami damage,” said Slert. December 1st marked “the beginning of crab season, and we’re thrilled we made that deadline. We have resilient people that have faced heavy storms and difficult challenges with the economy… The contest strengthened a sense of community pride… and showed that we need to put our heads, hearts and labor force together to make things possible.”