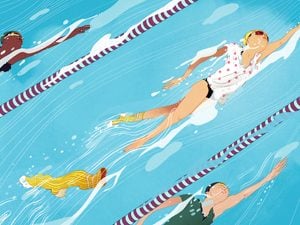 When the swim season began, my 11-year-old daughter, Elizabeth, and I cut a deal. She would go to practice three times a week and try really hard and have a lot of fun, and I wouldn’t make her compete in the swim meets.

Her nerves stem from the possibility that she will do something horribly wrong and let everyone down. The day of a meet, she would be scared all day. She would be scared as the meet began and scared throughout the meet. Afterward, when her mother and I asked, “Did you have a good time?” she would say, no, she did not.

Elizabeth started to talk about quitting swimming, which broke my heart because she loves swimming. So I came up with the deal, and she readily agreed.

Recently, Elizabeth’s team announced a special swim night: Members 11 and older would swim a timed 50 meters in all four strokes and then have pizza. It wasn’t exactly a meet, because it would involve only team members. That was my view. Elizabeth countered that it absolutely was a meet because there would be races and timers and so on. We needed a good contract lawyer. None was available. I told Elizabeth I really wanted her to go. She fought back furiously but finally agreed.

When the day of the special swim night arrived, Elizabeth was nervous. When we got to the pool, she became even more nervous. She was probably the youngest person there and shorter by at least a foot than most of the other kids. She panicked. She spent all her time by my side, shivering.

Her first race was the 50-meter freestyle. For the first time in competition, she used a swim turn. That was really cool to watch, and she flipped very well. But she missed the wall. She had to go back and touch the wall, so that hurt her time.

She swam her backstroke and breaststroke without incident. It wasn’t fun for her; I could see that. The older kids didn’t really notice her. She didn’t have any chance to win a medal. You always hear in sports that the butterflies go away after a while, but Elizabeth’s butterflies just kept flapping.

Then it was time for the T-shirt relay, which works like this: One person from each relay team puts on a T-shirt, a pair of socks, and a swim cap; swims 50 meters; and gets out of the pool. She takes off the clothes and puts them on the next person, who then swims 50 meters. This continues until everyone on the team has completed a lap.

For some unknown reason, Elizabeth’s relay team chose her to swim the anchor leg. They worked out a Cirque du Soleil move to get the T-shirt off one swimmer and onto the next one. It didn’t always work, but it was always entertaining. By the last leg, Elizabeth’s team had built up a moderate lead. Then it was Elizabeth’s turn to swim.

It was rather extraordinary to watch the team try to dress her in socks and a T-shirt. By that point, all tactics were out the window; everyone was pulling and yanking to get her inside the shirt and to get those socks on. And then she was off. She seemed to swim faster in the T-shirt and socks than she did when she wasn’t wearing them.

Approaching the halfway mark, she was still in the lead. Then somebody noticed that one of Elizabeth’s socks had fallen off and was floating in the pool. “She has to get that sock on before the end of the race,” a swimming official (or maybe it was just some guy) told Elizabeth’s team, “or you will be disqualified.”

Everybody on her team started screaming, “Elizabeth! Elizabeth! Stop! Get the sock!” But she couldn’t hear them. One of her teammates jumped in the water, grabbed the sock, and threw it at Elizabeth. She still didn’t notice. She was in the zone. She made the turn and started her last 25 meters.

“Elizabeth!” They yelled, even louder. She still didn’t hear them. (As her father, I could relate.) Meanwhile, a girl in lane two was gaining on Elizabeth. It was time for desperate measures. A girl on my daughter’s team jumped in the pool, grabbed the sock, and swam after Elizabeth. She grabbed Elizabeth’s foot. “You have to put the sock on,” the girl screamed. Elizabeth treaded water while her teammate put on the sock.

By now, the girl in lane two was about to pass Elizabeth. With the sock finally on, Elizabeth swam her heart out for the last 15 meters. It was close. But Elizabeth beat the other girl to the wall for the victory.

On the ride home, she relived her moment of glory again and again. She talked about how scared she was when someone grabbed her foot and how funny it was when she was sloshing to the finish and how great the night was. She told me that if the T-shirt relay was an Olympic event—and she is quite sure it should be—her team would win the gold medal. I told her that in my professional opinion, she was absolutely right.

Twice named the best sports columnist in America by the Associated Press, Joe Posnanski is the national columnist for NBC Sports.