15 Most Heartwarming Acts of Kindness of 2018

Let's take a moment to consider the kindness we extend to each other every day. These moving stories will reaffirm your faith in humanity. 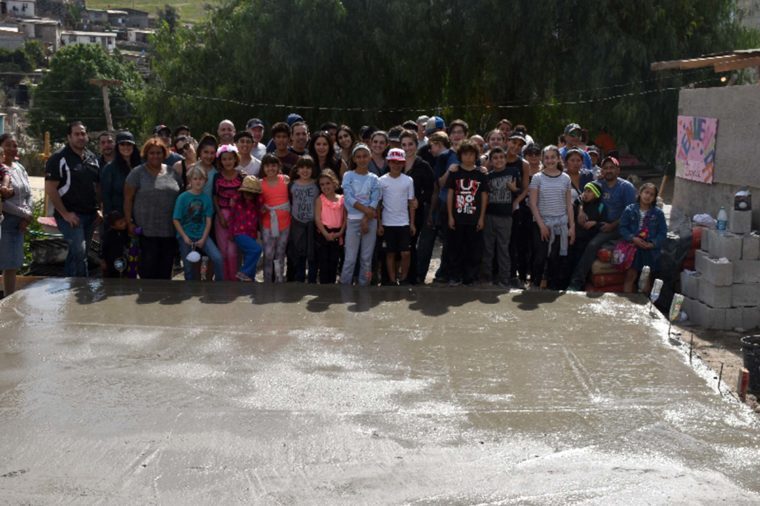 A teen building homes for families in need

Daniella Benitez, a 14-year-old freshman at Cathedral Catholic High School in San Diego, has made it her mission to help build homes for people in need alongside the nonprofit organization, Build a Miracle. It started when her family helped build a home in Tijuana that was sponsored by Daniella's school. "The day after completing the project, she woke up and told me she wanted to commit to building one home a year," said her mother, Ghada. Daniella recruited a team to raise the $16,000 needed to provide a fully furnished home with running water, electricity, beds, and showers each year. She plans to personally go down and help build, paint, and furnish the homes, as well. This past spring, Daniella helped build a home that was just completed. Check out 30 simple acts of kindness you can do in under two minutes. 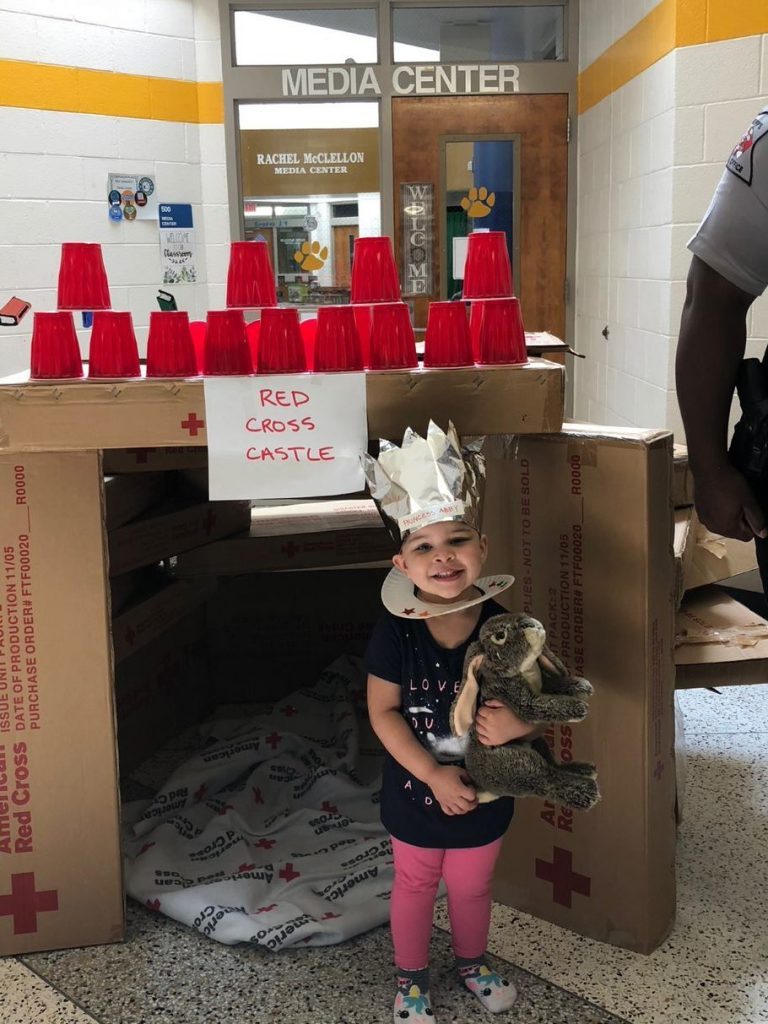 Abby is two years old. She's energetic, positive, and a lot of fun—even after being evacuated ahead of Hurricane Florence with her three older siblings and her mother. They ended up at a Red Cross evacuation shelter at W.T. Brown Elementary School in Fayetteville, North Carolina. "She had the biggest personality of anyone in the shelter," says volunteer Chelsea Griggs, who deployed from Minnesota's Twin Cities Red Cross Chapter. "She would always come around the corner of the registration desk to say good morning to everybody." Abby's family had been through this before, losing everything they had in Hurricane Matthew. Abby's cheerful attitude was rewarded when Griggs gathered a bunch of discarded cot boxes and built a play castle for Abby, using plastic cups for the spires and filling the inside with toys. Abby's face lit up at the sight of the box castle. "Is that for me?" she asked. Even the local sheriff's deputies got in on the fun, posing as guards in front of Abby's castle door. You can do these simple acts of kindness at any time–try them yourself! 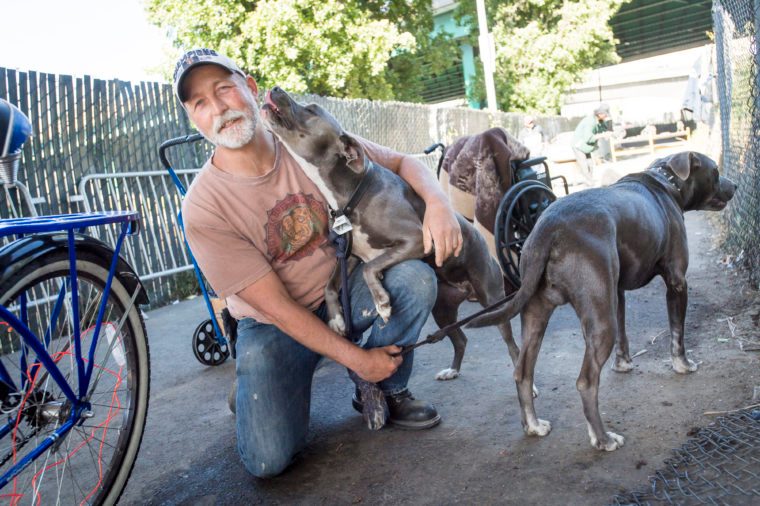 As he walked the streets of San Francisco, Paul Crowell couldn't help but feel concern for the hungry homeless dogs—and their homeless owners. A life-long animal lover, Crowell made it his mission to feed the homeless pets in his community. Crowell began by collecting food that restaurants and stores were tossing: "I delivered it to the many homeless dogs I saw in the encampments around here. Pretty quickly, I became known as 'the doggy food man,' and I started bringing it all the time." He started a GoFundMe to continue his mission, which has now evolved into the non-profit Project Open Paw. "I just love the dogs so much. It's ultimately about them, but I've also come to love these folks out here on the streets," he said. This year, Crowell has been handing out 30–40 bags of food a week—each filled with 10 cups of kibble, a can of food, and several treats. He estimates that each bag costs $10. And when a dog gets sick or a puppy needs shots, Paul is there to help. "The dogs give these people a reason to carry on, and a lot of times, that may be the only thing. They're a team out there; they help each other survive." Don't miss these life-changing acts of kindness. 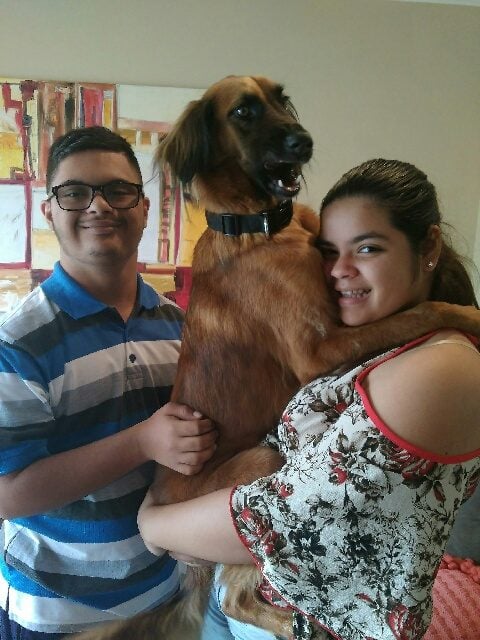 Reuniting a special needs boy with his beloved dog

In the wake of Hurricane Maria's devastation of Puerto Rico, the Collazo family planned to move to the States. The hitch? They couldn't find a way to take Melao, their rescue dog; Melao has a special bond with their son Jonathan, who has Down Syndrome. Although the Collazos found an organization that was willing to fly Melao, the plane had last-minute mechanical trouble and Melao was left behind. "My parents spoke privately about the possibility of that happening, and they would cry and become depressed," says Jonathan's sister, Katherine. After eight long months of research and failed attempts, the family reached out to The Sato Project who was able to connect them with Wings of Rescue. In May of this year, in partnership with The Sato Project and GreaterGood.org, Wings of Rescue flew Melao to reunite with Jonathan and the rest of his family. "You could feel that the dog emitted the love and warmth that glued this family together," said Ric Browde, president and CEO of Wings of Rescue. 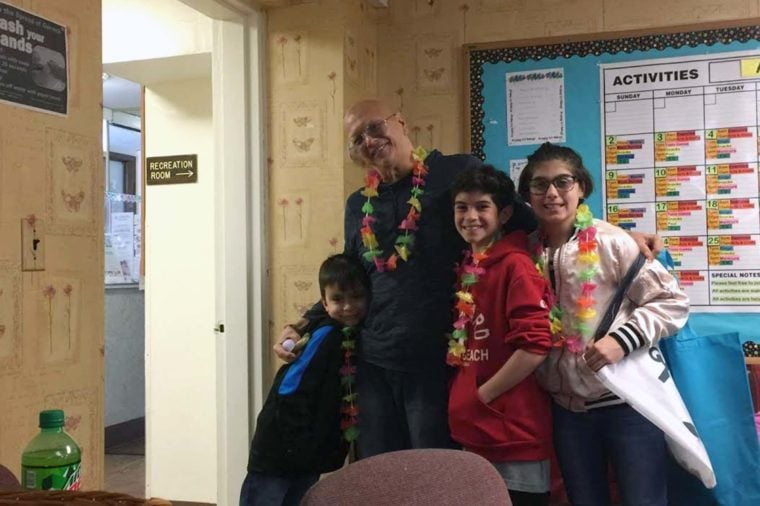 Seashells and leis for seniors

Eighth-grader Rachael came up with an incredibly thoughtful idea: She started Shells for Seniors—an initiative centered on decorating seashells and passing them out to elderly folks in senior homes. She took things a step further by collaborating with Love for the Elderly, a non-profit founded by Jacob Cramer in 2013 when he was just 13 years old. Working with the group, Rachel filled 100 bags with fun items like big sunglasses, floral leis, letters of love from kids around the country, and of course, beautiful seashells. On a gloomy day in April, Rachael and her friends delivered some sunshine to the residents of St. Nicholas Home in Brooklyn, New York. 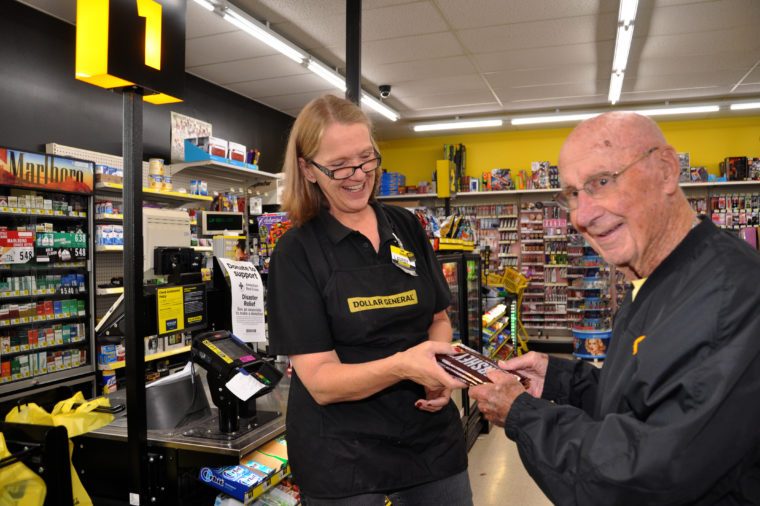 Candy from a stranger

Bob Williams, a 94-year-old man from Long Grove, Iowa, is making a positive impact in his community one chocolate bar at a time. He just hit a milestone of giving out nearly 6,000 Hershey's milk chocolate bars to local residents. Every Saturday morning he buys a boxful plus a few extras for the store employees and the customer in line behind him. The rest of the week, the retired teacher and coach never leaves the house without a few in his pocket, and he hands them out to random people he meets. "I began giving out candy bars as a way to connect with the community in my hometown. I thought it'd be a nice way to get to know people in my town and bring a little cheer. Sometimes you see the same faces day in and day out, but you never really get to know them. I wanted to do something to change that," he told Reader's Digest. Earlier this year, he went out of his ways to make a new college student in town feel welcome—check out the results, here. Read these 19 powerful quotes about compassion for more inspiration. 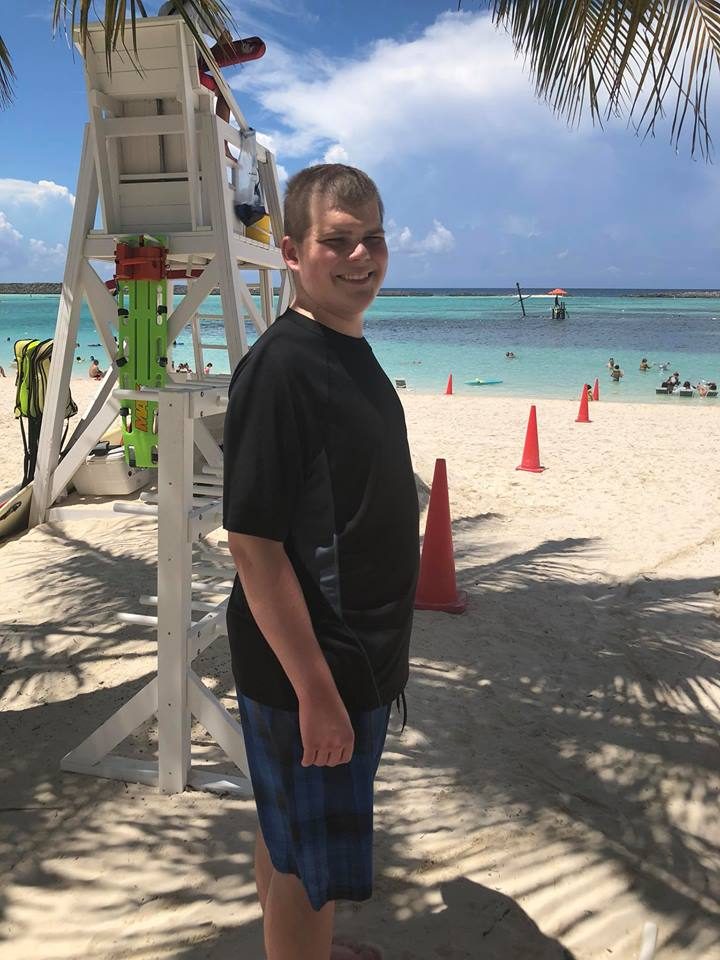 A cruise after chemotherapy

When doctors diagnosed 15-year-old Dalton McKernan with stage four Hodgkin's lymphoma, the outlook was grim. McKernan started chemotherapy feeling devastated. That's where Bianca's Kids stepped in: The organization grants wishes for foster children and for kids and teens who are battling a serious illness. The nonprofit wanted to do something to lift his spirits. "We spoke to his mom and asked what, more than anything, would he want in life? She said a Disney cruise," Bianca's Kids founder Debbie Savigliano told Reader's Digest. "We let him know that when he made it through all his chemotherapy, we would send him and his family on a Disney cruise." Instead of dreading his chemo treatments, McKernan began looking forward to them. "This act of kindness allowed our family to relax, laugh together, and create memories that we will cherish for a lifetime," says his mother, Liz. Between riding the water slides and snorkeling in the Bahamas, Dalton told Reader's Digest that the cruise was a blast: "Definitely a trip I will always remember." Try doing these random acts of kindness that don't cost a cent. 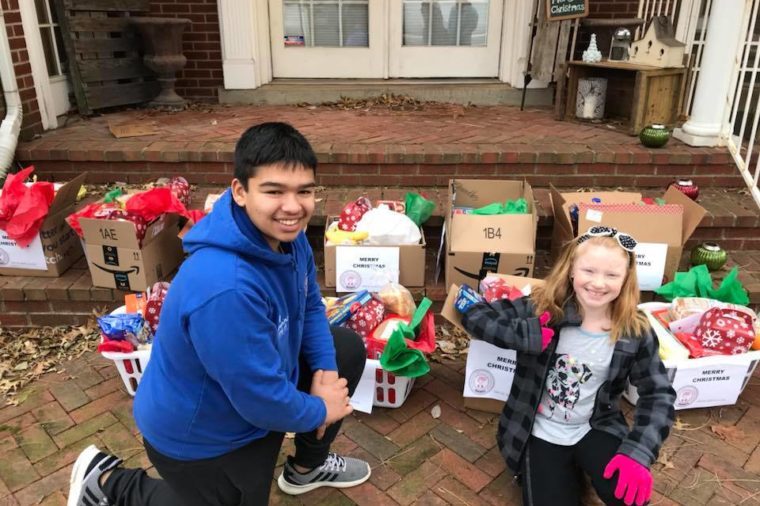 Acts of kindness everywhere, all the time

When Andrew Dunn was in fifth grade, he founded a movement encouraging his city of Louisville, Kentucky to practice random acts of kindness. That became RAK Louisville, and six years later, the now 15-year-old Dunn is still going strong with food drives for low-income areas and supporting the Burrito Riders—cyclists who make and deliver breakfast burritos to the homeless. Through RAK he organizes charitable efforts in Louisville and around the country. "People want to serve but they just don't know how to start." In September, he kicked off a weekly after-school tutoring program at Maupin Elementary, the lowest performing school in its district. He also partnered with Louisville's newly opened women-only day shelter to provide cleaning and laundry supplies and toiletries. 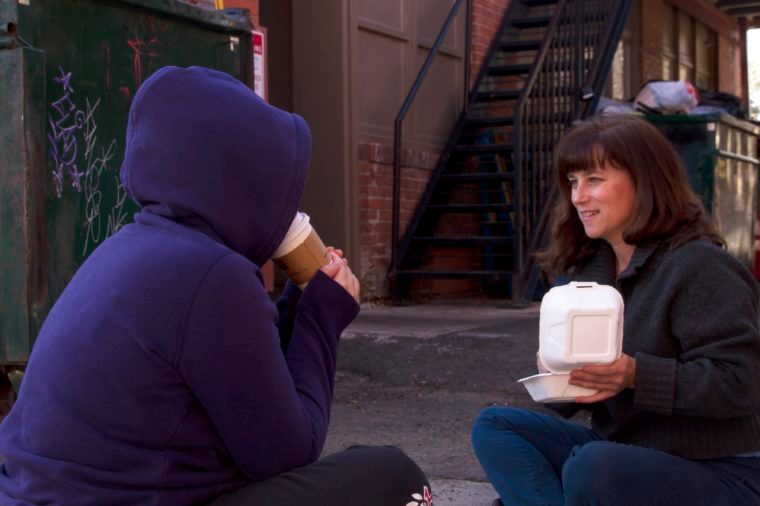 She travels to tell stories, hear the homeless, and feed them

Annalisa Parent knows stories. As a writing coach, she travels the world helping writers to find and tell their stories. But her mission goes beyond that: Parent always carries extra food, toiletries, and other items to help the homeless she meets along the way. Parent makes a point of sitting with people on the street to hear their stories. "It's important to me. There's power in the act of sharing a story that stems back to the basics of humanity and is tied to the dignity of every human being on this planet," she told Reader's Digest. On a recent speaking trip to St. Louis, Missouri, Parent planned to visit the Gateway Arch. "On my way, I met many people who asked for a bite to eat. Feeding these hungry people quickly became the more urgent priority." Parent went to a nearby restaurant and ordered individually packaged meals. Delivering them to homeless people, she sat and listened to their stories while they ate. Here's a story about a teen who started out feeding the homeless, and then created an international movement to help keep them warm in the winter. 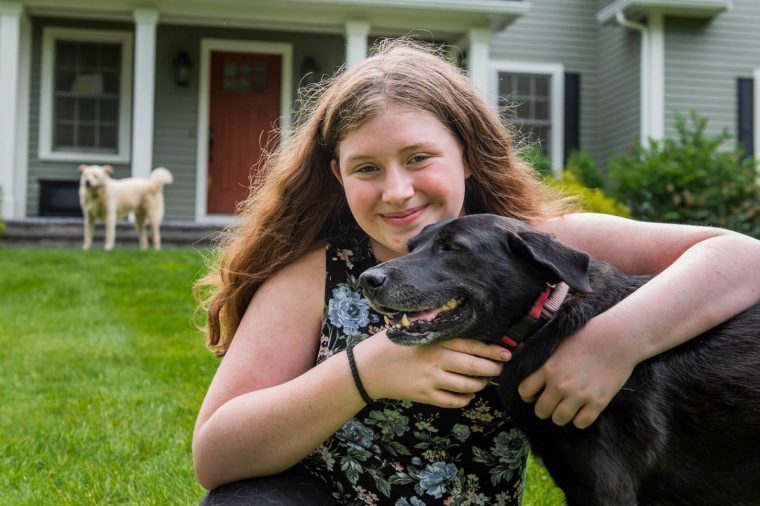 Devoting her life to saving hundreds of dogs

When 13-year-old dog-lover Molly Wogan learned how many canines get euthanized every year, she knew she had to take action. Wogan started the Precious Animals Wonderful Shelters (P.A.W.S.) Project to help dogs in hopeless situations around the country—and help place them in forever homes. She has volunteered more than 400 hours; Wogan has also raised funds by selling dog toys, treats, and keychains that she makes herself, along with writing letters to pet companies seeking donations for shelters. Wogan's raised nearly $80,000 in money and goods; this summer she organized two rescue trips that saved 110 dogs from high-kill shelters in Georgia, placing them in homes throughout New England (Wogan lives in Massachusetts). Wogan's mother Mindy tells Reader's Digest that, "As a parent, watching my daughter be so selfless has been an amazing thing. She has given up going to birthday parties and the mall to put up a table somewhere and raise money for dogs. And what's amazing is that she doesn't think of it as giving something up."