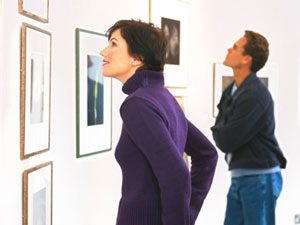 © George Doyle/Stockbyte/Thinkstock
In 2011, residents of more than 50% of the cities, towns and villages in the U.S. cast their votes in the inaugural Reader’s Digest We Hear You America campaign. The top 20 vote-getting towns received grants that allowed them to kick off (or complete) projects to make their communities even better places to live. This is one of those towns.

Want to help you town get the support it deserves? Vote in the 2012 We Hear You America campaign now!

Arts and education are a big part of life in Manchester.  Local schools, for example, teach kids reading and writing by having them draw, and the link between learning and art is strengthened by the Manchester Arts Commission, which uses the community gallery in the 200-year-old City Hall building to put on twice-monthly exhibits of local artists’ work. “The gallery is an opportunity for kids to see a higher level of art,” said Ann Kelley, the Arts Commission’s chairperson.

But the Arts Commission has no budget of its own, so receiving funds from the We Hear You America campaign was critical.  The grant money is being used to update lighting fixtures that illuminate artwork, add a molding system to help display more pieces and host larger shows, and install 3D cases to showcase bigger objects.

“Getting exposure from a national organization like Reader’s Digest that highlighted culture and tradition in Manchester truly unified the community,” said Kelley. “We banded together and showed we have the power to be selected, and make change. It is empowering.”