When a mom attended grad school to help her quadriplegic son, her son—and the school—thanked her in the sweetest way possible. 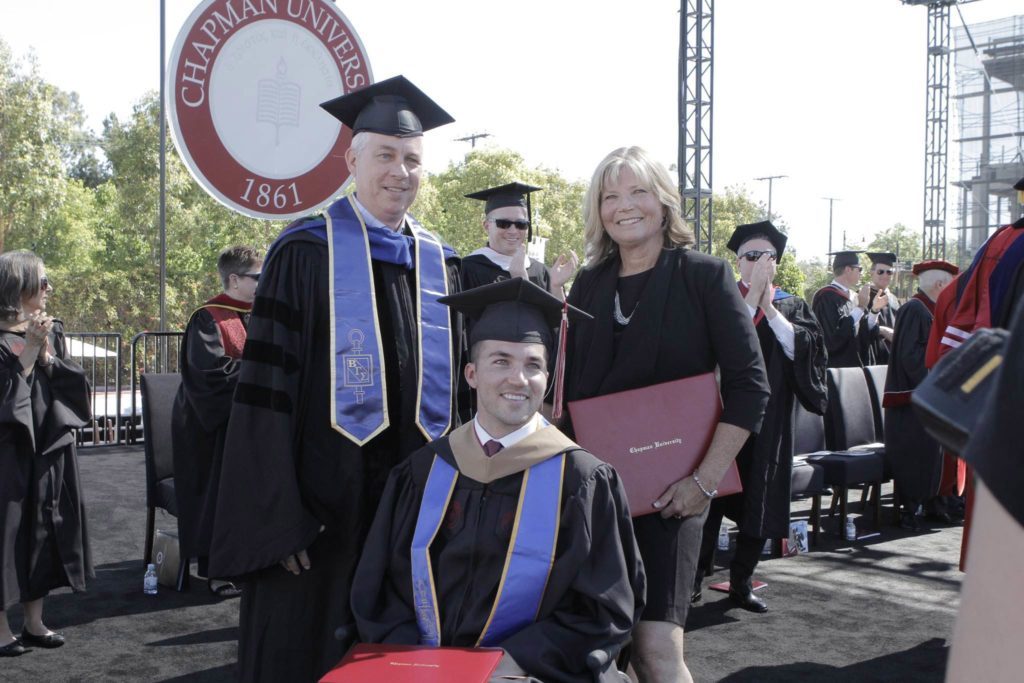 Courtesy Chapman University When her quadriplegic son decided to get his MBA, Judy O’Connor attended every class with him to help him write and participate. So when her son, Marty O’Connor, graduated, he planned a surprise to thank her.

On graduation day at Chapman University, Judy was dressed in black to blend in with the other graduates. Little did she know she’d soon be the center of attention.

When Marty’s name was called, his mom helped wheel him to the front of the stage. Pausing for a picture with Marty as he received his diploma, Judy felt the dean tugging on her hand. Over the loudspeaker, a voice choked with happy tears made an announcement: The university was giving Judy an honorary MBA. “A lump came to my throat,” says Judy. “I was proud of my son and touched to be honored.”

Posted by Chapman University on Saturday, May 20, 2017

To Marty, there was no question his mom, a retired elementary school teacher with a business degree, had earned her honorary MBA. Every day, Judy would sit by Marty in class, taking notes—making sure to jot down specific requests—raising her hand so he could answer questions, and silently filling in his answers on test days. “I was enjoying being his sidekick,” says Judy.

Perhaps just as important, Judy gave Marty confidence. It wasn’t until after his undergrad years that he became paralyzed after falling down stairs. It had been five years since he’d been in school, and he wasn’t sure how the classroom would go for him after the spinal cord injury. “There were definitely some nerves going, but after a little while we found that working together we could accomplish a great deal,” Marty says.

Over the two years of grad school, the mother and son had joked that Judy was putting in enough work to earn her own degree. So during a meeting with the university president, Marty asked if he could nominate her for an honorary MBA. The president was totally on board, and even hatched the plan to “make it the spectacle that it was,” says Marty.

Now that he has his MBA, Marty will go on to be head of corporate sponsorships for DIVERTcity, a startup that empowers youth through action sports.

Life as Marty knew it before the accident may have changed, but he encourages anyone in a similar situation to keep up hope. “Just keep an open mind, and you can make your diversity your advantage and take challenges as an opportunity for growth in your life,” he says.

MORE: How This Quadriplegic Boy Learned How to Move His Limbs … With His Mind