The Baltimore Orioles honored both boys for their courage. 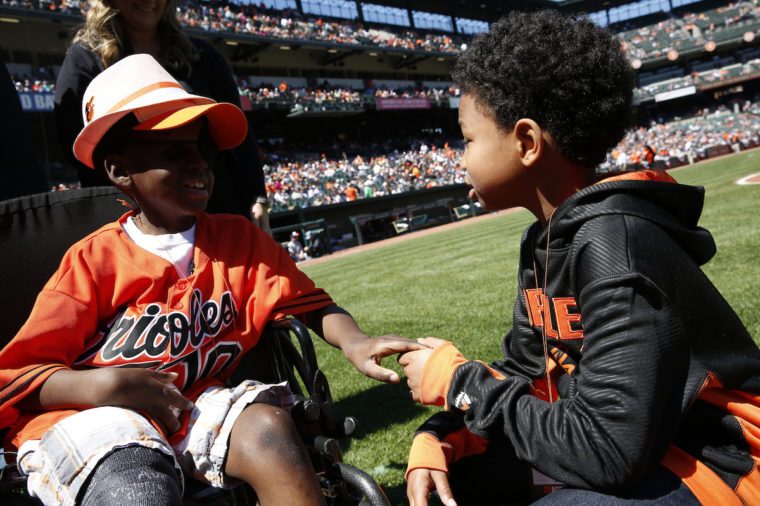 Eye cancer blinded Mo Gaba when he was a year old, and the 11-year-old is battling cancer for the third time—this time, in the bones. But his love of sports helps get him through.

As a frequent caller at Baltimore radio station 105.7 The Fan, Mo has drawn in some fans himself. He’s a die-hard Orioles fan and is always up for some baseball talk.

To give one of their biggest fans a chance to shine, the Orioles invited Mo to interview third baseman Manny Machado and outfielder Adam Jones in front of hundreds of people during the team’s January 2017 FanFest. Scott Garceau and Jeremy Conn, show hosts on 105.7 The Fan also joined Mo onstage, but the audience was most excited about the child guest host.

“When we finished, people came up to say hello to me and Jeremy and maybe get a picture, but about ten times that many came up to Mo,” Garceau tells MASN Sports.

The players gave Mo a T-shirt, which he wore to Oriole Park for the second Orioles game of his life (the first was for a fundraiser) in an April game against the New York Yankees. Mo didn’t just stay in the stands, though. Before the game, he was out on the field to give the first pitch for Kids’ Opening Day. “It was really cool,” he tells The Baltimore Sun. “I never knew that was going to happen.”

Jones joined Mo on the field, but he wasn’t the only one. Ten-year-old Thomas Moore was honored alongside the cancer patient.

Back in 2014, Thomas had been struck by a photo of a girl who’d lost her hair to cancer on his mom’s Facebook. Wanting to do something to help, he grew out his hair so he could donate it. It took two years, but his donated locks created three wigs for pediatric cancer patients.

Today we recognized Thomas Moore who grew out his hair and helped provide wigs for three cancer patients with his donation. #BirdlandHeroes pic.twitter.com/P1KA0RXt4X

“You see somebody that young with that much charisma, passion for life, compassion for others, then you see older people that have none of those qualities,” Jones says about his fan in a press release. “It’s pretty crazy that a young kid like that is putting forth such an impact. It just shows you how great this world can be.”

Mo’s mom had to stop working so she could take care of her son, but his fans are helping fund treatment. Since the big game, Mo has received more than $33,000 from his “Mo Strong” GoFundMe page.