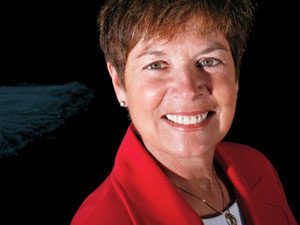 Danny Wilcox Fraiser/Redux
Staring at a computer screen, Patty Hall noticed an e-mail from Christopher Mutuku, her driver on her many trips to Kenya to do volunteer work. People in his village of Kathungu were desperate, he wrote. “The river has dried up, and there is no water.” Did Hall know anyone who could raise money to build a dam?

Imagining an enormous, expensive concrete dam, Hall started to hit Delete. At 57, she was about to retire after 35 years of teaching, most recently at Highview Middle School in New Brighton, just north of Minneapolis. As much as she loved Kenya, she didn’t want to get involved in a time-consuming project like this. She knew, though, that the lack of clean water was a life-and-death problem in sub-Saharan rural villages. Animals contaminated the rivers, the main source of drinking water. In the hot season, the rivers dried up completely.

“How much would it cost?” she wrote to Mutuku.

Hall showed her students slides of Kenyan mud huts and asked them to imagine living without running water. She shared photos of young girls carrying huge containers of water on their backs. The girls were unable to attend school, she told them, because they spent up to 60 percent of their day walking some four miles to and from rivers, springs, or the well in a nearby village.

Eager to help, the class decided on a name—H2O for Life—and set to work. Students sold H2O for Life wristbands, holiday crafts, and African-themed note cards. A student pianist held a concert that brought in $400. A Girl Scout troop sold valentines and donated $300. In just six months, the kids raised over $12,000.

At the end of the school year, Hall flew to Nairobi and made the bone-rattling three-hour ride across rocky dirt roads to Kathungu. Her hosts held a festive celebration, then showed her the dam, an eight-foot-high sand-and-concrete structure that traps and filters water so that it’s available and drinkable year-round.

Since that first e-mail, H2O for Life (h2oforlifeschooltoschool.org) has expanded to 14 schools—in Minnesota, Wisconsin, and Pennsylvania—and raised $130,000 to bring clean water to communities in Africa and Central America. Having shelved her plans to retire, Patty Hall is now working with students to build a rainwater-catchment system for Kenya’s Masai community and hopes to expand the H2O for Life program to 1,000 U.S. schools.

When Hall returned from Kenya, students lingered over her pictures of the smiling children who used to walk miles for water. “Nobody should have to spend most of the day getting water,” says 14-year-old Joe Dallas, “especially kids. Until this project, I always felt like I couldn’t do anything to help the world.” Thanks to Patty Hall, Joe and his friends know that even one school can make a difference. n