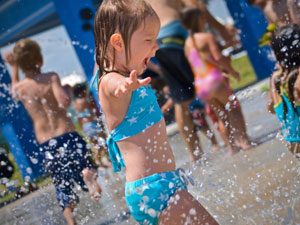 After the only outdoor pool in town closed, local families were left without a safe place for cool summer fun. So community leaders dreamed up the spray-park idea: 35,000 square feet of aquatic play space, to be built in the same spot as the old pool and decked out with a red-white-and-blue color scheme to honor the community’s veterans.

It’ll take $400,000 to finish the project, but the We Hear You America campaign got the ball rolling by contributing $10,000 in seed money. The town’s taking it from there, with everything from fundraising by local businesses to applying for a State of Michigan grant (they’ll find out about that in April).

We Hear You America did more than jump-start the cash; it also piqued interest in the project. “People keep asking about it. They’re really excited,” said Bill Shafer, the town’s recreation director. “The citizens of St. Johns have an incredible sense of community; everyone knows everyone and people pull together to make things happen, [especially] when it’s needed [the most].”