Thank You for Your Service: How Everyday Americans Help Veterans

We asked for your stories of gratitude big and small that show how America helps its own returning veterans. 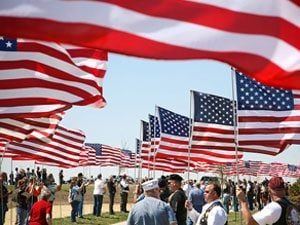 In our recent feature story, “You’re Welcome America: Now Hire Us,” five unemployed veterans told us about the unique challenges our vets face as they struggle to find jobs back home.

At the same time, our editor-in-chief Liz Vaccariello invited readers to share how they express their gratitude to those in the military. We received an outpouring of response and stories of thanks; here, we highlight the most outstanding and touching examples of Americans giving back, hoping to inspire a new wave of appreciation for our troops.

• Jerren A. wrote about Kathie Wolin, a retiree who uses the little money she earns to build and send care packages for troops abroad. “For years, she has sent troops overseas her ‘Mom’ packages… Every week she spends her own money to put together these ‘thank you’s’ to our troops.”

• Dr. C. Bruce Rotton, a general surgeon in Branson, Missouri, “has signs posted around his office that honor all branches of the services, and a scrapbook of patients who have served in the military,” wrote Jim and Debby S.

• Wendy T. submitted a story about her husband and his friend Joe, who “have for the past few years been serving up gratitude one plate at a time by going to military bases and BBQ’ing for the troops.” As her family has two sons stationed at Camp Peddleton in California, the two men often go there to feed the units.

• George Malanga and his wife, Jill, own two childcare franchises in Northern New Jersey. He wrote, “We simply offered free childcare to a family that had a mother or father currently in the military overseas.”

• The Honor Flight Network is a non-profit organization that flies senior veterans to Washington, D.C., entirely for free. World War II veteran George Shira described his experience touring the various D.C. monuments, adding, “I tried to make a donation to the program, and would you believe they won’t accept donations from Vets?”

• Renewable energy company Airstreams shows its gratitude by offering a unique training program that targets returning veterans. Dave Schulgen, a veteran himself, wrote: “We train for work in the renewable energy wind industry or energy industries. These industries want to hire veterans, and take just about everyone who has gone through the program.”

• Homes for Our Troops builds specially adapted homes for severely injured veterans. Bruce Hawkins, a developer for the organization, wrote, “Developers like myself build homes for injured veterans in many locations in the United States, and when we finish them Homes for Troops hands them the key.”

• Cell Phones for Soldiers was started by two young adults, Robbie and Brittany Bergquist, when they saw a story on their local news channel about a soldier returning home with an $8,000 cell phone bill. Shocked that this man had to pay when he was serving the country, they started a nonprofit that provides prepaid calling cards and free phone services to deployed and returning military members. Erin M. writes, “Since 2004, Robbie and Brittany have provided more than 150 million minutes of free talk time to our servicemen and women. Approximately 12,000 calling cards are mailed each week!”

• And from our previous coverage: A Jacksonville, North Carolina, wedding planner arranged for a vet and his bride to have a free wedding. Author James Patterson donated 200,000 of his books to troops in Iraq and Afghanistan. Ohio business owner Eric Zimmer turned his HR department on its head, seeking out veterans for hire.

Do you know someone helping our troops? Tell us in the comments below.