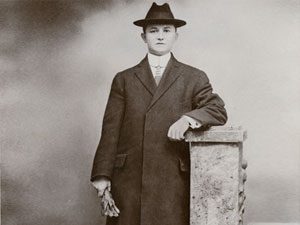 Courtesy Margaret O'Carroll FeigleMichael O'Brien in the coat that survived
My great uncle Denis O’Brien boarded the Titanic as a third-class passenger at Queenstown, Ireland. He was 21, a jockey from County Cork who was offered a job riding horses for an American family. His older brother Michael, my grandfather, who had made his own trip across the Atlantic a few years earlier, was waiting for him in New York. In one version of the story—different family members recall hearing different details over the years—Michael sent Denis a proper overcoat so he wouldn’t look too poor when he came through Ellis Island. That may or may not be true. What we know for sure is that Denis didn’t make it, though his overcoat did.

As the ship was sinking, Denis, who is sometimes listed as Timothy O’Brien in Titanic passenger records, wrote a note to Michael. He gave the note and his overcoat to a woman in a lifeboat and asked her to see that his brother got them. She did. A photo of my grandfather wearing what we have always called “the Titanic coat” holds a special place in the family archives. In the picture, he looks small and dapper and not poor at all.

No one knows what the note said—that part of the story got lost over the course of the past hundred years—and I often wonder what few words Denis chose that night. I also wonder what he was thinking later, as he stood on that tilting deck with no coat and faced the end of his too-short life in that cold ocean, beneath those cold stars.

Watch David share his personal story of this special family artifact on CBS: