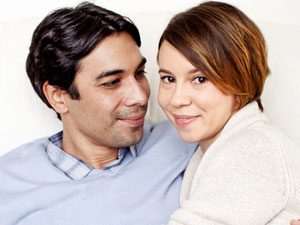 Photographed by Tamara ReynoldsShe didn't want to meet him -- so her mom and his dad concocted a scheme.
STEVEN: The first time I met your mom was when she came up to me and said, “It’s a pleasure to meet you. My name is Nadia, and I’m your future mother-in-law.” The first words out of her mouth — I hadn’t even met you!

ALEXANDRA: My mom had been diagnosed with breast cancer in 2001. She had lost her health insurance and had to sell our house to pay for treatment. So she rented a house your dad owned. They found out that they both had single kids in their 20s, and they decided that we were perfect for each other. My mom invited you to dinner, and the second I found out about it, I said, “Call him up and disinvite him! You’re not setting me up!”

STEVEN: I was pretty disappointed because my stepmother had showed me pictures of you, and I was, like, “Wow, she’s really cute! I would love to get to know her.”

ALEXANDRA: They had to find another way for us to meet. They were sneaky.

STEVEN: They concocted this story: My father wanted me to help him move stuff out of his rental property. So I was taking apart my sister’s playground set that had been there for years upon years, and then your mother pulled up with you.

ALEXANDRA: She got you to help her move, too, so we spent a week together — long, long hours.

STEVEN: You had invited your ex-boyfriend to come over. I remember you said, “Steve, you can go home. My mother doesn’t need your help anymore, because my boyfriend’s going to be here.” But then your brother said, “Why don’t you stay? My mother would really appreciate it.” If I had gone home that day, I don’t think I would have ever come back.

ALEXANDRA: Seeing you and him together was important — how different you were. And then my brother said, “I think you’re perfect for each other, and I don’t think you’re going to give this guy a chance.” So I had to prove him wrong. By the end of the week, we were dating. Six months later, we were living together in New York.

STEVEN: Your mother passed away a couple of years later, and then my father had pancreatic cancer. I think it bonded us.

ALEXANDRA: Today is our wedding day. We got married in city hall.

STEVEN: I don’t even think I said “I do.” I said, “Of course I do! I’m the luckiest guy in the world.” That’s how I feel. I don’t think I’ve ever been so certain about anything in my entire life, and I didn’t hesitate a single moment. Before your mother passed away, I made a promise to her that I would always take care of you and love you. If you were ever in a similar situation with my father, what would you say to him?

ALEXANDRA: I would tell him that I’m the luckiest girl in the world. I would never let you out of my grip. Ever.

RECORDED IN NEW YORK, NEW YORK, ON JULY 18, 2008.
Steven has continued his father and grandfather’s accounting firm. Alexandra is in a PhD program in biology at Columbia University. They split their time between New York City and the house in northern New Jersey where they met and fell in love.