The love of her sixth-grade life gave her a gift that melted her heart. 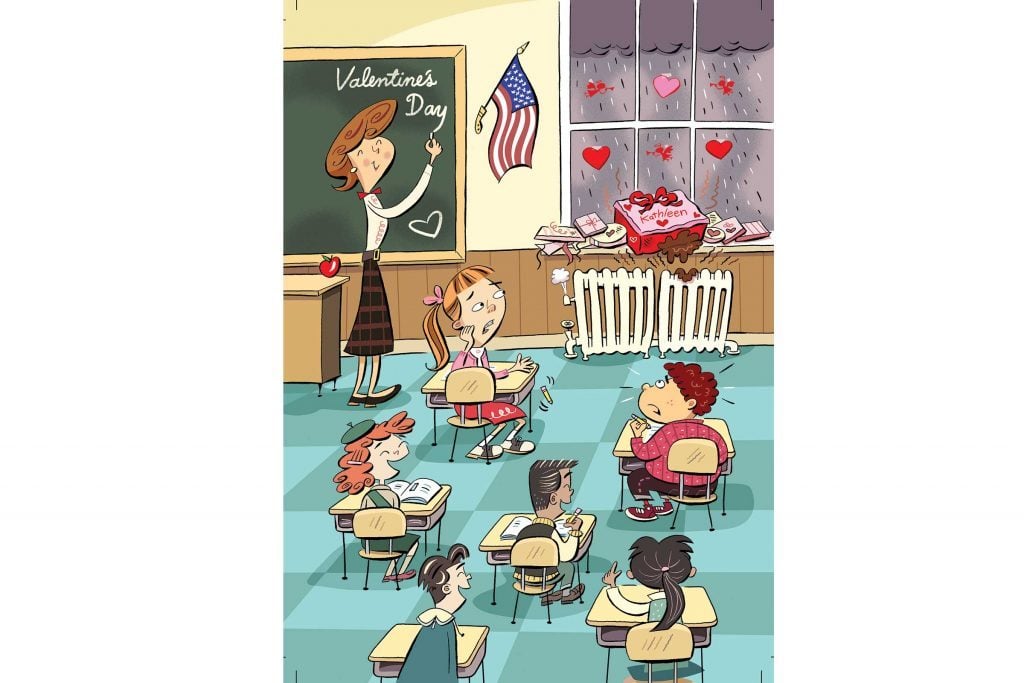 Back in the dark ages, when I was an 11-year-old sixth-grader in Ms. Daisy Blogg’s classroom, the most wonderful thing happened. I fell in love. It was magical as Buddy O’Toole, and I zinged whimsical grins across four rows of desks.

Thoughts of chocolates and surprises preoccupied me as Valentine’s Day drew near. I could barely wait to hear what our teacher had planned as our tall classroom windows glittered with familiar sweet red angels and assorted paper hearts. “Please bring a decorated container with your name clearly marked on the outside,” Ms. Blogg announced. “You will make enough valentines for every box.”

While the ladies fancied valentine greetings, the sixth-grade boys were not as sold on the custom, as it suddenly seemed juvenile, silly and mushy. Regardless, Buddy told me to make sure my container was at least as big as a shoe box. That day would be my first experience on cloud nine.

Walking to school, none of us escaped the cloudburst and squall swirling about the playground as we ran for cover with our valentines. The swings and trapezes banged and twirled, snarling their chains around and around. Then there was a sudden lull while they untangled at breakneck speed.

After placing our wet valentine boxes on the windowsills above the radiators, we spent the morning glancing at our wrinkled and fading handiwork. Ribbons and string hung limply, making strange arrays of bleeding pigments and hues upon all they touched. Nonetheless, for the girls, the day dragged on endlessly.

As Ms. Blogg read the history of Valentine’s Day aloud, a sudden psst, psst, psst emanated from the radiator. We all broke out in giggles as we watched chocolate drip, drip, dripping from a corner of the big red shoe box marked “Kathleen.” I glanced over at Buddy, but there were no smiles or giggles, just horror written all over his face. Buddy had spent all his allowance on Hershey’s Kisses and meticulously pasted each one upon a card.

Finally, the 3 o’clock bell rang and the day was over. The students gathered their valentines under their coats for the drizzly trek home. I caught up with Buddy in the hall and asked him to meet me across the street at the library.

After choosing a corner spot, I set the table with his lovely chocolate-covered card and the knurly candy kisses. We sat and talked until a grin crossed Buddy’s chubby cheeks, then finished off the remains of a valentine neither of us ever forgot.