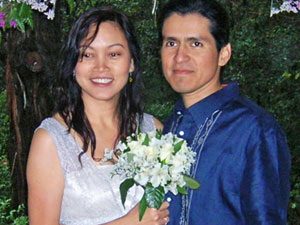 Courtesy Ruben P. SalazarShe lived in Bangkok, he lived in Texas. A chance typo brought them together forever.
RACHEL: It was January 10, 2007, and you were working at a computer lab in Waco.

RUBEN: I got to work, and first thing I did was crank up my e-mail. I discovered one that I didn’t know who it was from, addressed to “RP Salazar.” I figured, Hey, my e-mail is almost the same, so they probably sent it to the wrong person. I dug up this Rachel Salazar name, and I wrote a little message — “Hi, Rachel, holá, it seems as if this message came to me instead of you. I’m in Waco, Texas, USA.” And the signature was “Ruben P. Salazar, Chicano Cyclist, Commuter, and Community Artist.” “PS: How’s the weather in Bangkok?” Because I saw you were in Thailand.

RACHEL: And I wrote to you: “Hi, Ruben, holá, thanks for forwarding the message. Weather in Bangkok is lovely; it’s the best time to visit. Gracias, Rachel.”

RUBEN: So began a chain of e-mails. I just imagined, Here’s this middle-aged woman who’s bored at work. But I happened to hover my pointer over your name and a picture popped up, and I was, like, Wow, she’s beautiful! How can I make this picture bigger?

RACHEL: Every conversation that we had right from the get-go was natural.

RUBEN: I opened myself up and told you who I am, the good things, the bad things. I don’t think I left anything unsaid. By February or March, we were on the computer sometimes for four or five hours.

RACHEL: I wrote a handwritten letter to you on a plane. I actually managed to write eight pages. I started describing the meal, how the flight attendants kept looking at me and wondering, Who is this girl writing to? Around page six or seven I got serious: “I know life has a way of interrupting the best-laid plans, but I am prepared for it.” In hindsight, you are that interruption. Honestly, I don’t think I was thinking about you in a romantic sense, probably until June.

RUBEN: Whereas I looked upon you romantically the first time I saw your picture.

RACHEL: I realized I kept telling you things I didn’t even tell my mom. Then you sent me flowers. You wrote, “Chica naranja, thank you for all you do, and thank you always for this newfound friendship we have happened upon. RPS.”

RACHEL: I know, but I loved it.

RUBEN: At some point, I called you.

RACHEL: I was excited: Wow! He sounds so real!

RUBEN: Then you threw out that you might come to the U.S., and my reply was, “If you’re ever in Texas, I’ll be glad to show you around.” I never thought you’d take me up on that!

RACHEL: I decided that I was going to Texas, but I didn’t tell anyone. Everyone would have said, You’re foolish to go halfway across the world to meet some strange guy!

RUBEN: On my end, every relative, every friend, every coworker — everyone knew. They’re, like, “No way she’s coming! She doesn’t even know you!”

RACHEL: We were e-mailing for eight months, and finally for eight days we were together. I had the greatest time of my life.

RUBEN: I remember we were dancing one night, and you mentioned something to the effect that no one —

RACHEL: — I said you were the sweetest guy I’ve ever met. No one’s ever been that tender to me.

RUBEN: I knew right at that moment: I need to do something so I don’t lose you. I got on my knee and asked you to marry me.

RUBEN: But when you first told your family that I had proposed, they weren’t so excited. And when I told people, they’d say — You what?! Followed by five minutes of laughter.

RACHEL: Yes, but now they all tell us: You’re perfect for each other. You found the right match!

The Salazars celebrated their fourth anniversary last fall. At press time, they were planning to visit the Philippines, where Rachel’s family lives.