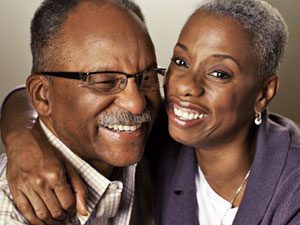 Photographed by Tamara Reynolds
RON: Pepper would describe me as a ladies’ man, and I was. Twenty-five years ago, I dated a lot of women, and most of the relationships were fairly shallow. But my conversations with you weren’t shallow.

PEPPER: I can’t pinpoint when I fell in love with you, but I remember one time you left a message on the answering machine: “Hi, this is Ron. Just checking on you, baby.” I absolutely loved that. I remember saving that message, and I would play it and play it. But when you first broached the subject of marriage, I was, like, “I can’t marry you.”

PEPPER: No, you didn’t, thank God. We had a big wedding, and it was exciting. Walking down the aisle as Pepper Hunter and coming back down the aisle as Pepper Miller, that was a little startling. But I got into it; I enjoyed being Pepper Miller. We had a good life. But things changed, and I began to feel like our marriage was all about you, and I wanted it to be about me too. So we got divorced. It was painful. We went to the same church, and you sat on the other side. You dated people, and I dated people.

RON: I poured myself into my work. But it was hard; I missed you.

PEPPER: I missed you too. Remember when you called me and you had the flu? I came and made you soup. After tucking you in, I remember smelling your cologne on me. I missed the smell of your cologne. It’s those little things that you miss. I would call my girlfriend and say, So-and-so is a really nice guy, and I have a good time with him, but … And my girlfriend said, “Well, the problem with this guy is he’s not Ron, and the problem with the other guy is he’s not Ron.” I didn’t want to believe that. Then my girlfriend said, “Don’t hold Ron hostage to the past.” When she said that, I started crying, and she’s, like, “If you don’t care about him, why are you crying?”

Those words freed me to look at the possibility of us getting back together. I called you, and we started dating, and it was good. Then I took my dad on a cruise. We were unpacking on the ship, and in my suitcase there was this long letter from you, asking me to marry you. It was just a pouring out of your heart. That was in August. In December, we were married.

RON: We were married eight years the first time, we were divorced five years, and this December it will be ten years we’ve been married again.

PEPPER: We still have our bumps, huh?

RON: Yeah. I guess we’ve learned that we’re always going to have our bumps, but there’s nobody that we’d rather be with. The lesson is to hang tough and make it work.

PEPPER: And to be grateful. We have been through a lot together, but I’m still excited to be with you.

RECORDED IN CHICAGO, ILLINOIS, ON FEBRUARY 24, 2011.
The Millers recently celebrated the tenth anniversary of their second marriage by visiting Rome and Florence.