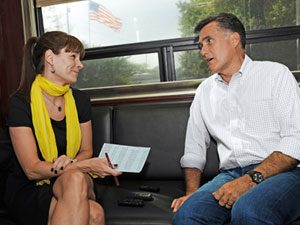 Photograph by Steve Vaccariello
Reader’s Digest: If you had to write a book about this campaign experience, what would the title be?

Mitt Romney: The title of this campaign … The Longest Journey.

RD: After all these years as a public figure, do you think the American people know the real Mitt Romney? Maybe I should ask, What do you want us to know about you that we don’t know?

Romney: I don’t think people know me terribly well, because I was governor of one state and haven’t been seen by people across the nation. But they’ll come to know me as time goes on. I’m a family guy. Most important thing in my life by far is my relationship with my wife and my sons, daughters-in-law, and 18 grandchildren. And for me, this is all about them.

RD: Reader’s Digest is in 76 countries around the world, most of which will publish this interview. So finish this sentence: The world needs the next president of the United States to …

RD: How about this sentence: Americans need the next president to …

Romney: Build a stronger economy and restore the principles that made America the economic powerhouse it has long been.

RD: A president has to make life-and-death decisions—to kill an enemy of the United States, for example, or to go to war. How would you explain such a decision to a child, perhaps one of your grandchildren?

Romney: The decision to put American lives at risk is a decision that has a very high hurdle to pass. There would have to be a substantial American interest at stake. We would have to understand clearly what our mission was, how we would achieve it. We would need to provide to our men and women the resources to be successful. We would need to understand how we would leave and what would go on after we were home. I would explain to my children very simply that the defense of liberty is a cause that exacts a very high price in the history of humankind. 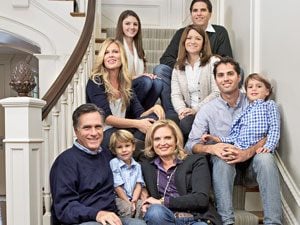 Ben Baker/Redux
RD: Let’s talk about family. I’m wondering if you have a family saying that gets you through hard times. If you do, what is it, and who came up with it?

Romney: “This, too, shall pass.” I’m kidding—that was not our family saying.

RD: If after people die they can observe their loved ones, what do you believe your mother, Lenore, is thinking about the life you’ve led?

Romney: My guess is that my mom and dad are very actively involved in the affairs of the next life, and they don’t spend too much time looking back. My dad used to say he always looks forward, he never looks back. But given the fact that I’m in a presidential race, I hope the Master gives them a chance to look in now and then. And I hope that I’m serving the principles that they believed in.

RD: And what were those?

Romney: They loved America. They believed that America presented the greatest hope to the earth for freedom and liberty. And they’d want me to defend those things.

RD: Can you sum up in one word the kind of life you’ve given your sons?

RD: How do you personally define happiness?

Romney: Happiness, for me, is a function of the number of people I love, and I think joy and happiness is directly related to how many people are in our lives and how deeply we are bonded with those people. And so I’m happy if I’m with Ann; I’m happier if I’m also with my family and my grandchildren.

Romney: There is no day more joyful in my life than when I see all my family around me. That’s the best it gets.

RD: How often do all of you get together?

Romney: We get together for Christmas every other year, the whole family. In the even years, they come to be with Ann and me. In the odd years, they go with their in-laws. And then we’re all together for one to two weeks in the summertime.

RD: What was the most memorable day you’ve ever had at church, besides your wedding and any baptisms and communions?

Romney: Being asked to become the pastor of a congregation. That is a responsibility that is given to individual members [in the Mormon faith], as opposed to a full-time paid clergy, as in other churches. And I was asked by one of my church’s leaders to take responsibility for becoming the pastor of a congregation, and that experience opened my eyes to the challenges and hopes of many people of many different backgrounds. 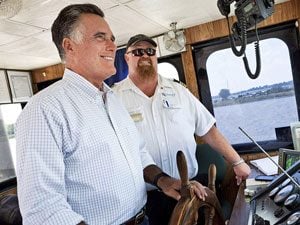 Richard Perry/New York Times/Redux
RD: Every leader, executive, every person wakes up some days and just has a bad day. Just can’t be happy or get pumped up. Do you have a trick or a strategy that you use to get your energy up? Do you have a theme song?

Romney: If I have a bad hair day, I just think, Well, it will be an OK hair day tomorrow. Just put your head down and go. Life is a bit like being on a roller coaster, which is, You get on and there’s no stopping along the way. There are some days when you feel like this is pretty tough, and there are the days that are exhilarating, but you just keep on going.

RD: When’s the last time you got choked up?

Romney: I was emotional and choked up in Milwaukee, Wisconsin, this week when I introduced Paul Ryan to 13,200 people from his community. And they cheered and cheered, and I looked at him, and he had tears in his eyes, and that immediately brought tears to my eyes. The love and respect they had for him reminded me of how much of a character he is.

RD: Now for a few Reader’s Digest–themed questions. One of our columns goes back almost 90 years, and it’s called My Most Unforgettable Character. Who would you say is your most unforgettable character? Tell me why.

Romney: My father. My dad was born in Mexico. He came back to the United States at age five or six. He was under the care of the government for a while because they came back poor. His family went broke more than once. And he was never able to finish college, but he became head of a car company and a three-term governor and ran for president of the United States. He was a person unbounded by circumstance. A man of character and vision who lived his life without guile.

RD: “Unbounded by circumstance.” That’s lovely. We have another popular column called Word Power, and many people around the world say that they’ve learned English from it or that they’ve expanded their vocabulary because of it. What’s your favorite word, in any language?

RD: At Reader’s Digest, we always say that laughter is the best medicine. So what’s your favorite joke, and could you tell it to me now?

Romney: I came into a large room of Republicans in Massachusetts, and I turned to my wife and said, “Ann, in your wildest dreams, did you see me running for political office?” And she turned back and said, “Mitt, you weren’t in my wildest dreams.”

RD: I like that your favorite joke was Ann’s. Is she the one who makes you laugh?

Romney: We fell in love when we were young. She was 16; I was 18. Some people, I’m told, grow apart when they meet very young. We grew together. We share perspectives; we don’t agree on everything, but we see things in a very similar way, and we’re entirely devoted to each other. I would rather be with her than doing anything else on earth.