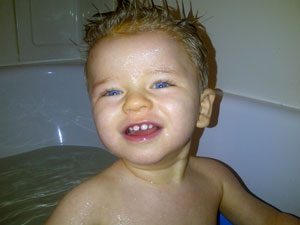 Courtesy Stauff family
Evan Stauff was only three months old when his mom, Kathleen, woke to find him tense and rigid one April morning in their North Bend, Oregon home. “Dave, I think he had a seizure,” she told her husband in alarm. They decided to wait and watch for a little while. Twenty minutes later, it happened again.

Kathleen rushed Evan to the pediatrician’s office, where the baby continued having seizures. He needed to be flown to a major Portland hospital for neurological evaluation. David was in shock. How could this happen after Evan seemed so strong and active?

At the hospital, doctors diagnosed Evan with infantile spasms, a type of seizure disorder treatable with medication. But two weeks later, the spasms had increased. Over the next three months the family tried other medications, including daily anti-spasm injections. Nothing worked. Evan suffered up to 150 spasms a day. He lost the ability to hold up his head and would stare through people without seeing them. “It was so terrible to see him all of a sudden plateau and then regress,” David says. They were losing Evan and couldn’t stop it.

A positron emission tomography, or PET, scan confirmed what earlier tests measuring brain activity had suggested: Evan had an abnormality in the left back region of his brain. The hospital referred Evan to Dr. Gary Mathern at the University of California-Los Angeles. Mathern was a pioneer in hemispherectomy, a remarkable surgery which removes half the brain for patients with severe epilepsy. David thought it sounded like something that happened only on television. Surely, he thought, they might take only a little piece of Evan’s brain. Not half.

After further tests, Mathern identified the specific portion of Evan’s brain that had failed to develop properly. The baby was at high risk for profound disabilities. He might never recognize his own parents, or the seizures might kill him. For Evan, losing half his brain was less dangerous than keeping it. There was no time to waste because the damage could spread to his good hemisphere. The idea might be unthinkable to outsiders, but after seven months, David and Kathleen knew this was the only option.

Mathern led the 11-hour surgery just before Thanksgiving. Surgeons removed about a quarter of Evan’s brain and disconnected another quarter so it couldn’t communicate with the right hemisphere.

The effects were immediate. Within a day and a half, Evan followed his mother and father with his eyes. A few days later, he started babbling. “That was like music,” David says. “In 10 months of life, we’d never had a response like that.” Both parents cried tears of joy to see their baby’s personality for the first time.

Evan has been seizure-free since his surgery. He calls his father “Dada” and plays peek-a-boo with his two older brothers. It’s not certain yet whether Evan’s right hemisphere will assume control over his language and allow him to talk. He may also walk with a limp or not at all. But none of that matters to David and Kathleen. Whether Evan’s progress comes from science or something more spiritual, they believe in Evan and all he can become.