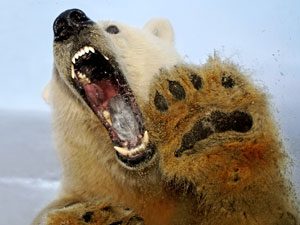 © 2011 Steven Kazlowski/alaskastock.comAt 11 years old, the polar bear was 800 pounds, and nine feet tall.
The massive polar bear lumbered along the rocky shoreline, just a yard or so from the stormy waters of the Arctic Ocean. Occasionally it raised its head to sniff the Arctic air, hoping perhaps to pinpoint an easy meal of a washed-up ringed seal or walrus carcass.

It was late July, and in this uninhabited part of the Norwegian archipelago of Svalbard, high above the Arctic Circle and just 600 miles from the North Pole, much of the drift ice had melted. This made hunting for seals—a polar bear’s favorite meal—nearly impossible. Although huge, the bear was desperately hungry.

With a westerly wind at its back, the male bear continued to patrol the shore. Then, perhaps catching the scent of something unusual, it stopped dead in its tracks. It sniffed the air, and steam billowed out of its bright black snout. Following its nose, so sensitive that some say it can smell a decaying whale carcass from 20 miles away, the bear suddenly turned downwind and inland. Its paddle like paws dragged, leaving deep tracks in the sand. The predator was closing in on its prey.

It was to be the adventure of a lifetime. For almost two years, longtime friends Sebastian Plur Nilssen and Ludvig Fjeld, both 22, had been training for this two-month-long kayak expedition. Hoping to follow in the footsteps of other Norwegian explorers such as Roald Amundsen and Thor Heyerdahl, the two were attempting to become the first kayakers to paddle around the entire Svalbard archipelago, a trip of more than 1,100 miles through one of the world’s most remote regions.

To get fit, they had donned dry suits and kayaked through the ice-filled rivers near their hometowns outside Oslo, pulled heavy kayaks over ice floes, and jumped into the freezing waters to toughen themselves.

Lifelong hunters, they honed their marksmanship by sprinting up hills, loading their rifles, and pulling the triggers. As many Arctic experts had told them, if they needed to defend themselves from a polar bear, they’d have little time to think. Each carried a rifle in a waterproof bag lashed to their kayaks. Holding steady, controlling their breathing, aiming, shooting: It all had to be second nature.

The two pioneers set out from Longyearbyen, dubbed the northernmost settlement in the world, on July 5, 2010. They averaged about 15 miles a day, and by the end of July, they had reached the northern shore of Nordaustlandet, one of Svalbard’s High Arctic islands.

With the wind picking up and the sea growing choppy, they decided to head for shore and camp on a beach near a promontory named Ekstremhuken. As Nilssen paddled alongside Fjeld, he held up the map and joked, “Funny name for a place, no? I wonder if that means something ‘extreme’ will happen here?” Fjeld smiled.

After pulling their kayaks onto the rocky beach, they pitched their tent and rigged up a trip-wire perimeter nine feet away, as they did at every campsite. A series of small explosive charges would go off if an animal were to cross the wire, giving the men time to grab their rifles and scare away a bear or, if necessary, shoot it.

The two awoke the next day to ferocious winds and rough seas. After checking the weather forecast via satellite phone, Nilssen and Fjeld discussed the situation. “We’ll have to stay another night,” Nilssen said. “Tomorrow should be clear.”

Later that day, while chasing a tarp that had blown away, Nilssen fell over the trip wire, setting off an explosive charge. He quickly fitted a new one to the wire.

“Damn,” he said as he crawled back inside the tent, “I’m getting clumsy in my old age.” As they did every night before they tucked in, Nilssen and Fjeld double-checked that their rifles were loaded and close at hand.

As they were sound asleep, the polar bear that had picked up their scent began lumbering toward the camp.

With the wind howling, the bear burst through the trip wire, but the charge did not fire. Nilssen awoke to a crashing sound when the bear trampled the tent and ripped it to shreds with a mighty sweep of its paw. “Bear!” shouted Nilssen as he felt it lock its jaws onto the back of his skull, pulling him from his sleeping bag. All he could see was a towering mass of white fur. As the bear sank its teeth deeper into his skull, it uttered a low-pitched, guttural growling. Nilssen was able to grab his pump-action shotgun while the bear dragged him out of the tent. Screaming, he tried to hit the bear with one hand while gripping the gun with the other. But nothing deterred the animal.

Suddenly the polar bear changed its hold on Nilssen and sank its teeth into his right shoulder. Then it shook him back and forth, each time penetrating Nilssen’s flesh more deeply with its teeth. Pain shot through his body as if an ice pick were being twisted into his shoulder.

It’s trying to shake me unconscious, thought Nilssen. The bear began dragging him onto the rocky beach. The shotgun is my only chance, he thought. Just then the gun fell from his grip, and the bear stepped on it, snapping it in two. “I’m dead,” Nilssen said out loud when he heard the gun break in half. “It’s over.”

Fjeld woke up when he heard Nilssen scream and turned to see the bear inside the tent, with Nilssen’s head in its jaws. While shaking him, the bear had stomped on their gear, much of which was now crushed or buried in the soft sand.

Fjeld jumped up and reached for his grandfather’s World War II rifle. It was missing. He frantically clawed at the debris in front of the tent. “Where is it?” he yelled, then felt the stock of the rifle and pulled it out of the sand. “Sebastian!” he yelled. Sebastian didn’t answer.

The bear was now by turns dragging and carrying Nilssen by his wounded shoulder. I must act now to save my friend, thought Fjeld. Time was running out.

The bear dropped Nilssen some 100 feet beyond the camp. Then it roared and raked its razor-sharp claws over Nilssen’s torso. Blood covered the kayaker. The bear put its two front paws on Nilssen’s chest, pinning him to the ground and pushing him deep into the sand. Nilssen felt his ribs cracking. The bear’s hot breath was on his face. He looked directly into its deep black eyes. They were cold and empty.

Then the bear turned and saw Fjeld standing with rifle raised outside the tent. Fjeld held his breath to still his shaking trigger finger and aimed at the bear. “Steady,” he repeated to himself. He was afraid he would hit his friend. Nilssen yelled, “Shoot! Shoot!” But before Fjeld could fire, the bear climbed off Nilssen, sunk its jaws into the back of his skull again, and stood straight up, lifting Nilssen several feet off the ground.

Fjeld ran closer to them. Nilssen shouted again, “Shoot! Shoot or I die!”

The polar bear stood sideways to Fjeld; he aimed at its back and squeezed off a shot. The bullet ripped into the bear, and the animal dropped Nilssen to the sand. One last time the bear managed to sink its teeth into Nilssen’s shoulder. Then Fjeld pumped four more rounds into the beast’s chest. The bear fell over, dead at last.

Fearful that other polar bears might be attracted by the smell of blood, Fjeld slammed another five-shell clip into the gun. Nilssen lay crumpled on the beach. The back of his scalp hung loose and his shoulder was shredded open. His body was covered with bleeding wounds, but he was alive.

Fjeld carried him back to the tent; he covered his bleeding scalp and shoulder with compression bandages and wrapped him in a sleeping bag. “You’ll make it,” he told Nilssen as he gently wiped blood from Nilssen’s face. “We’ll get you out of here.”

Nilssen groaned. His body throbbed with pain, and the smell of his blood filled the tent. He whispered to Fjeld, “My neck. I think the bear might have broken it.”

Fjeld knew he had to keep Sebastian warm because it would be hard to survive the frigid temperature with such devastating wounds. He punched the number of a Longyearbyen hospital into the satellite phone. The operator picked up.

“We need help,” Fjeld blurted out. “We are kayakers,” he told the hospital’s nurse manager, Aksel Bilicz. “My friend has been attacked by a polar bear. Please hurry!”

Bilicz called the local police, and about 35 minutes later, a rescue helicopter was in the air. The trip to the camp, however, would likely take almost an hour and a half.

Fjeld returned to Nilssen’s side. Nilssen was pale and shivering. Fjeld talked to him incessantly to keep him awake. “They are sending a helicopter,” Fjeld repeated. “It won’t be long.” Though Nilssen writhed in pain, Fjeld made the hard decision to withhold a dose of the morphine they carried with them because it might knock Nilssen out. Despite his suffering, Nilssen did not want to lose consciousness. Meanwhile, Fjeld scanned the horizon for other polar bears, his rifle loaded by his side.

When the helicopter touched down, two medics carried Nilssen to the chopper. He was put on a saline drip and given a painkiller, though his neck throbbed too much for a brace.

At the hospital, Nilssen underwent a three-hour operation during which surgeons removed all the damaged tissue under his wounds. His neck was badly bruised but not broken. The next day, as Nilssen lay recuperating, surgeon Kari Schroeder Hansen visited him. “Another few millimeters and the bear’s teeth would have punctured your lung and crushed your skull,” the doctor told him. “You wouldn’t still be with us.”

Today, at home north of Oslo, where he is raising a team of sled dogs, Nilssen sips coffee with Fjeld. Nilssen unbuttons his shirt. His shoulder and torso are tracked with scars from the attack. “I’m not a religious person, but I know it was a miracle I survived,” he says as he buttons up. “I also know that I owe my life to Ludwig.”

Fjeld demurs, saying, “I just instinctively did what we were both trained for.”

The men are considering a return expedition to Svalbard—although their families, who initially learned of the attack on a radio program, are not keen on it. When asked about the experience, Nilssen is amazingly composed. “It is our big regret that the bear had to be killed,” he says reflectively. “I still think the polar bear is the most majestic animal in the world. It was just trying to survive.”

Ex-Gunman Tells Us How to Stop the Next Mass Shooter