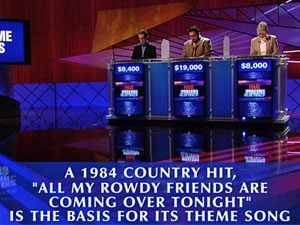 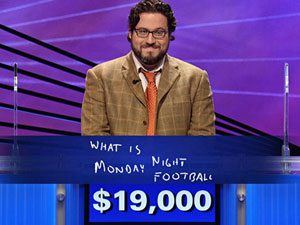 Photos: Courtesy Jeopardy Productions, Inc.
“I’ve been screaming at the TV screen during Jeopardy! since I was in fifth grade, but that didn’t prepare me for standing face-to-face with Alex Trebek, my makeup washing down the neck of my shirt in rivers of sweat and my hand hovering over the buzzer.

“Despite the sweating, things were going well. My strategy (never guess!) had put me way out in front, with twice as much money as my competitors. I was riding the rhythm of the buzzer and paying attention to every rapid-fire clue. What is convection? What is Gravity’s Rainbow? You can’t stop to gloat over an answer you got right or despair over a stupid mistake, because by that time, you’ve missed the next three clues.

“I felt even more relaxed and confident after the bit Trebek does with the contestants about midway through the show. I talked about my obsessions—TV theme songs and presidents of the United States—and the audience seemed to approve.

“My heart was pounding when Trebek unveiled the Final Jeopardy category: TV Theme Songs. Oh my god! The audience gasped audibly, and Trebek reassured them that this was just a fluke. But now I really couldn’t lose. My feet lifted off the ground for a minute.

“They give you 30 seconds to figure out how much of your winnings you want to bet on the final question. I scribbled madly on a pad of paper, figuring out how little I should bet in order to protect my huge lead. It was $199. Agony! I could bet the rest of my winnings, over $18,000, and almost certainly double them.

“Two things flashed through my head. The first was me as a child watching Jeopardy! with my grandfather. ‘Gamble!’ he would yell, encouraging them to take big risks. The second was an episode of Cheers in which Cliff, the loser mailman, is miraculously poised to win on Jeopardy! and then blows it all by making a greedy bet on Final Jeopardy. I had to ignore the spirit of Pappy and remember the lesson of Cliff. I wrote down $199.

“And, of course, I knew the question to the answer when Alex Trebek read it. I felt a flash of
remorse that I hadn’t gone for it all. But then a wave of joy and pride wiped it out. I had won Jeopardy! I was the champ, and I would return.

“Which I did, about 45 minutes later. They tape two shows a day, with a break just long enough to grab a slice of pizza and a bottle of water and get your make-up reapplied. Once again I was in the lead heading into Final Jeopardy. When Alex announced the category, I almost fainted: presidents of the United States. My other obsession. I thought, I am going to win this thing again! But I fumbled the final question: ‘Which president installed solar panels on the White House?’ It was Jimmy Carter. Less than two hours after I won at Jeopardy!, I lost at Jeopardy!

Theriault lives in Portland, Oregon, where he is news editor at the Portland Mercury.