Reader’s Digest unites its readers and their families like no other brand through the simplest of acts: sharing stories, laughs, and great advice. Heading into its 100th anniversary, Reader’s Digest is America’s fourth largest-circulation magazine brand, standing out more than ever in today’s cultural landscape due to its themes of optimism, faith, heroism, trust, humor, and wellness. Online RD.com publishes hundreds of original articles a month to give homeowners peace of mind, and save them time and money, by helping them know exactly what and what not to worry about. Our new brand, the Healthy, covers health and medical information with depth and authority, while our books, including the famous condensed fiction series Select Editions, deliver a bundle of emotions from curiosity and amazement to reassurance, gratitude, and amusement. In all its work, Reader’s Digest carries on its singular, historic vision: to bring out the good in people and families everywhere. 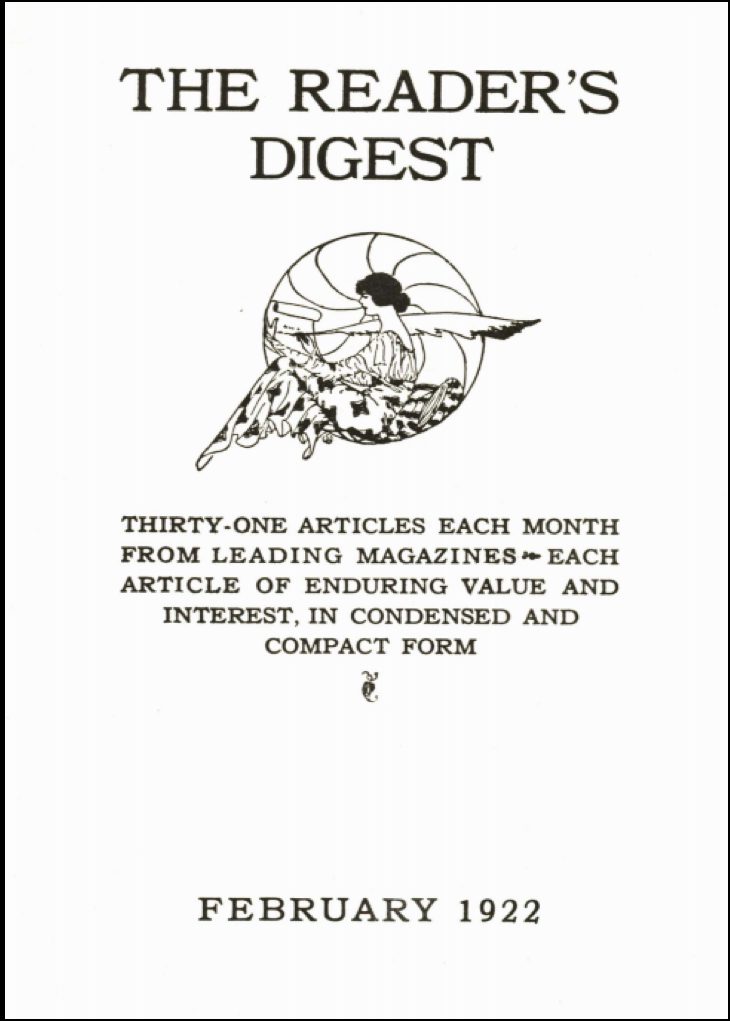 Reader’s Digest was first published in 1922 by DeWitt Wallace and Lila Acheson Wallace. A man ahead of his time and the world’s earliest “content curator,” DeWitt Wallace recognized that people were hungry for information but overwhelmed by choice, so he began collecting the best stories from a vast array of publications and condensing them into what today is almost universally referred to as “the Reader’s Digest version.” Each issue contained 31 articles (one to read each day of the month) of “enduring value and interest, in condensed and compact form.” Within five years the Wallaces were printing and distributing 30,000 copies.

By the 1940s, the Digest had surpassed 1 million copies a month and was the best selling publication in America—exceeded in sales only by the Bible and spreading its own gospel of “America the Great.”

Through the years Reader’s Digest editors continued to curate the best content from foremost publications and began also to commission ground-breaking reporting and original works that influenced public perception and sometimes forged changes in policy.

1935: “And Sudden Death” by Joseph C. Furnas reported on the rising death toll caused by automobile accidents—and some say laid the groundwork for seat-belt safety laws.

1940: “I Quit Smoking, or Cooper’s Last Stand” by Courtney Ryley Cooper was included in the case file for the congressional hearings on the tobacco industry.

1950: “How Harmful are Cigarettes?” by Roger William Riis.

1952: “Cancer by the Carton” by Roy Norr contributed to the largest drop in cigarette consumption America had seen since the Depression.

1962: “Danger: Smoke at Your Own Risk” summarized the latest findings from the scientific community about the health risks of smoking, including the then-newly discovered link to heart disease.

1965: “The Shame of Our Nursing Homes” by Alfred Balk brought the horrors of nursing home abuse into America’s living room and consciousness.

1977: Murder of a Gentle Land: The Untold Story of a Communist Genocide in Cambodia. A Reader’s Digest original book by John Barron and Anthony Paul, it was the first documented account of Khmer Rouge atrocities.

1980: “Chappaquiddick: The Still Unanswered Questions” by John Barron. A Reader’s Digest commissioned original, the article presented new reporting on tidal conditions and the speed of the car on the night of the fatal crash that reopened the case in many readers’ minds and is widely believed to have contributed to Kennedy’s failure to win the Democratic nomination for president.

1996: “Horror in the Heartland” by Henry Hurt described the life and capture of Oklahoma bomber Timothy J. McVeigh, the lives of some of the victims, and lasting affects on family, rescuers, and survivors.

2013: Reader’s Digest conducted a global social experiment to find the most “honest” cities—by dropping hundreds of wallets (all contained a cell phone number inside) and seeing how many were returned. Four continents, 16 cities, 192 wallets later, 47% of the wallets—almost half—had been returned. While Helsinki was the city with the greatest returns and Lisbon the city with the fewest, the survey found that honesty did not break down over gender or age lines. But honest people everywhere shared one single trait: they believed it was the only way to behave in such a situation.

Today, on the cusp of our 100th birthday, we continue to curate the very best and most engaging content for our readers, both print and digital.

Reader’s Digest shares trusted advice and stories to help you and your family enjoy healthy, wealthy, and wise lives. We get to the heart of the matter and keep it simple, informative, and fun.

“Shares” summarizes our process in a word. What authors, experts, journalists, and our own community shares with us, we in turn share with the world.

“Trusted” is our core trait, and we double down on it. Whether it’s a thrilling real-life drama or an in-depth article about colon cancer, we strive for everything we publish to be accurate and in context.

“You and your family” remain our North Star. We’ll always look for opportunities to be a glue of good feeling and life lessons across the generations.

The Reader’s Digest Version gets to the ”heart of the matter” with light-heartedness whenever possible. That means “simple, informative and fun” applies across every platform.

Our editorial team is made up of writers, editors, and contributors with extensive professional experience in their fields of expertise. We share a journalistic commitment to providing our readers with the very best and most authoritative information on the internet. Meet the editorial team.

Reader’s Digest is part of Trusted Media Brands, home to some of the most iconic brands in the country, reaching a uniquely engaged audience across multiple digital platforms, social media, magazines, books, music, and events.

Reader’s Digest was the first print magazine to go international, starting with the United Kingdom in 1938, followed by a Spanish language edition in 1940, and eventually publishing in 17 languages in 34 countries. Today Reader’s Digest is published in 22 countries.