Meet the Pitbull Who Became Her Family’s Caretaker

"At that moment, Emmy Lou came up to me and put my whole wrist in her mouth. She was hugging me. I couldn’t help but smile at her."

Tabby was a sweet brindle boxer we adopted as newlyweds. She kept me company while my husband was in medical school. We shared food and the couch. If I cried, she would lick my face. I could fall sleep hugging her. She was diagnosed with lymphoma at age 13. We made the most of her last year.

After her diagnosis, my husband insisted we get another dog to help transition when Tabby died. We looked at Petfinder and I reluctantly agreed to meet a few rescues, but only if they were nice enough to put up with a very sick, very dominant boxer. We rolled up to an adoption event with Tabby, and towards us roared two huge, coiled balls of sheer muscle. Twin giants, struggling against the leashes to close the gap between them and my frail and dying boxer. 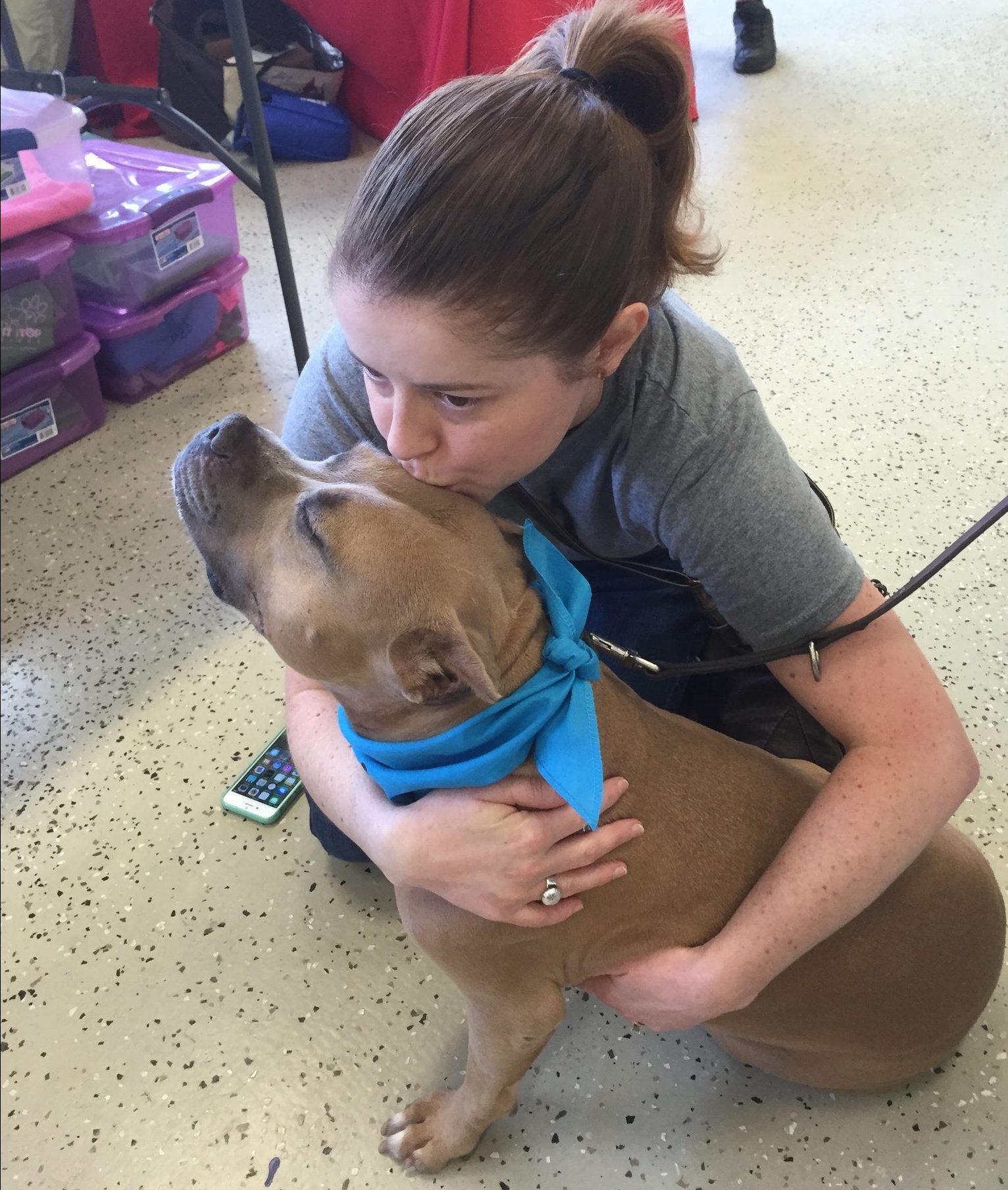 Courtesy Laura PennThen, they met. One immediately leaned over and…licked Tabby right on the face. That was Ethan. His sister, Emmy Lou, also licked Tabby and did everything she could to endear herself to all of us, and it worked. My husband wanted to bring Emmy Lou over for a sleepover. I was panicked: What if they fought? What if Tabby snapped at Emmy Lou like she normally does with other dogs?

I ended up having to fuss at Tabby, who bossed Emmy Lou even though she let Tabby have complete control of the house. We’d come to learn that Emmy Lou was a natural-born caretaker, a smoother-over, and completely unselfish. She slowly got closer and closer to Tabby, until she could groom her. Emmy Lou would groom her every time Tabby got chemo, and when Tabby could barely walk, would let her take some of her food.

Then came the day we had to say goodbye to Tabby. What a horrible day. I was crying in the backyard, drinking coffee, and wondering who would comfort me when I’m sick or sad, like Tabby did? At that moment, Emmy Lou came up to me and put my whole wrist in her mouth. She was hugging me. I couldn’t help but smile at her.

RELATED: The Seeing-Eye Dog Who’s Always Ripe for a Challenge

After Tabby died, we decided to get another dog for Lou because she is so social. Willamina came from the same rescue, and even foster mom. Mina, we suspect, was likely used for backyard breeding and escaped someone’s yard. She was captured once but escaped once more. Animal control wouldn’t catch her again until a year later. And this time, she was pregnant, heartworm positive, and had a broken hip that healed poorly. I kept seeing her puppies getting adopted and thought “Who’s going to take mama?” Then I realized, it was me.

Animal control thought Mina was feral and would be hard to place. I thought she was the opposite of aggressive and terrified to the point of shutting down. The day we brought Mina home, Lou ran up and down the hallway in pure joy. Mina shrank, then Lou came and cuddled her. 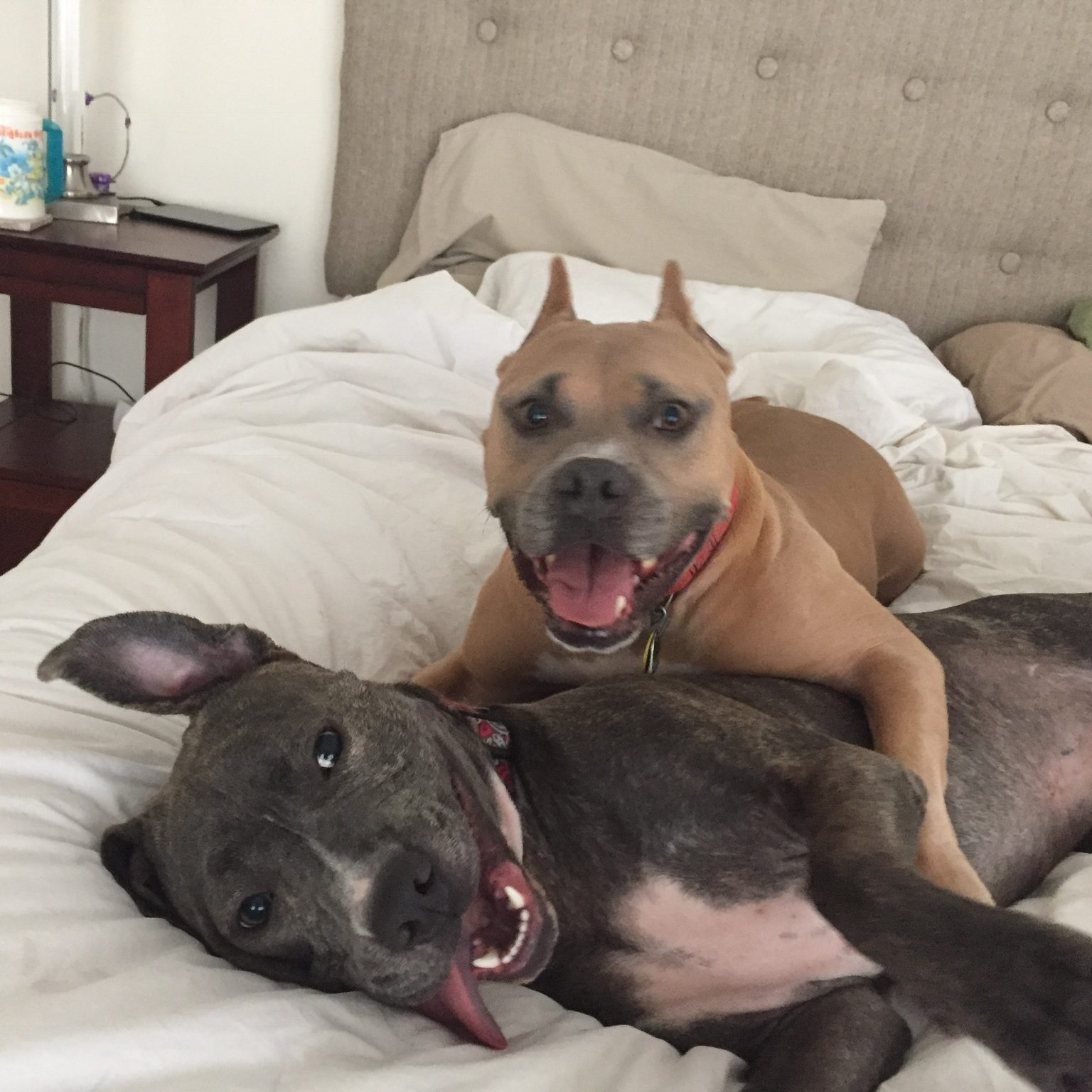 Both dogs welcomed my daughters when they were born. Mina and Lou were very gentle and soft when they were infants, but absolute saints when they were wild toddlers. Mina would hide from the rambunctious toddlers but offer a gentle lick if approached. Lou, on the other hand, wanted to be in the middle of the action. She got the most table scraps as a result: toddlers love throwing food.

Toward the end of 2020, Mina started going to the bathroom in the house and pushing her head against the wall, and stopped eating. She had a large, inoperable brain tumor. She was confused and in pain. Saying goodbye was heartbreaking for all of us, Lou included. Lou is still here though, checking on her babies and making me smile no matter what’s going on. We recently found a lump on her lower gum. We’re trying to resolve it with antibiotics. If it doesn’t go away, the next step is biopsy. I hope it goes away. I love my Lou. Next, pit bull “facts” that are totally false.

Adorable Animal Friendships That Will Fill Your Heart with Happiness

This Doggie Daycare Cared for Essential Workers' Dogs During the Pandemic. Now the Community Is Giving Back.

This Brave Dog Saved His Rabbit Friend from a Dog Attack

How to Make Compost at Home to Enrich Your Garden
This Veterinarian Helps Pets of Homeless People Out of His Own Pocket
After a Woman Rescued an Injured Swan, Strangers Helped Her Get the Bird Across the City to a Rehab Center