“If You Find This Letter, Then It’s For You”: What It’s Like to Write Love Letters to Total Strangers

Hannah BrencherUpdated: Apr. 15, 2016
From the book If You Find This Letter

Hannah Brencher left a note on the subway for a stranger. What came next was an abundance of love.

I looked down at my shoes as people filled the train, and then I saw her. I saw her beat-up unlaced construction boots first. I followed the shoes, laceless hole by laceless hole, all the way up to the face of an old woman. She was tiny. She had a slight slump in her shoulders. She wore a bright red cap. Wisps of gray poked out from beneath it.

As I watched the woman, I thought about the letters my mother wrote and how she must have known an ordinary piece of loose-leaf paper morphs into a love letter when a person puts her self into it. Then I remembered the notebook in the belly of my bag. I would write the woman a note and give it to her as I exited the train, I decided. I could drop it at her feet.

I pulled the notebook out of my bag, turned to a new page, and began writing a letter. The words spilled out of me.

When I looked up, the woman was gone. I left the letter in my notebook, unsure of what to do with it now that she would never know that it was meant for her.

After I wrote that letter, more letters to other people I observed came marching out of me, one by one, until soon I had filled up the notebook.

Back on the train, just a few days later, the plan became clear. I was going to leave the letter I wrote to the woman on the subway for someone else to find. Then I would scatter other love letters all over New York City. And once I had set each one in its place, I would write even more. And you want to know why? Because it made me feel something.

I tried to imagine what would make me pick up a letter if I found it on a random subway train or in a coffee shop thinking it might have been for me all along. I settled on something simple: If you find this letter … then it’s for you. I wrote those words on my first letter. I folded the letter and placed it behind me. When I got to my stop, I planned to let the letter slip down onto the seat as I walked away.

[pullquote]I left the letters everywhere I could. I was playing Juliet to the city.[/pullquote]

At Grand Central Terminal, I waited for the subway doors to open and then busted out of my seat quickly. Darting through the doors, I kept walking faster and faster once my feet hit the platform. My nerves surged. There was a whiff of adrenaline as I got farther away from the train, disappearing into the city.

During the fall of 2010, I kept tucking and leaving, tucking and leaving. I left the letters everywhere I could. I propped them on bathroom sinks. I slid them into coat pockets in department stores. I left them in fitting rooms. I would stick them into the seats at work when I would attend large meetings. I was playing Juliet to the city. 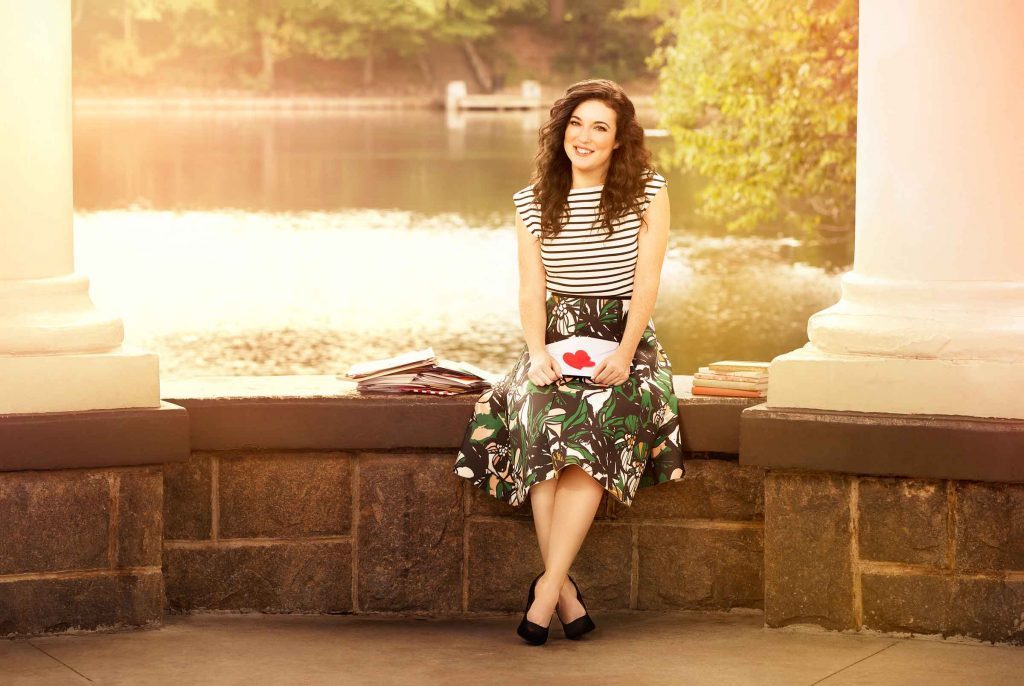 In the months that followed, Brencher started her own site, MoreLoveLetters.com, about her project, inspiring others to write and leave letters in their own communities. Now the website connects her both to strangers in need of love letters and to those who want to write them.

About a year later, a woman wrote to me about her friend Briana, a single mother struggling to pay the rent. I typed out Briana’s story and published it on the website, encouraging anyone who read it to mail me letters of encouragement for Briana. I decided that at the end of the month, I’d send Briana a bundle of love letters.

A week later, my heart sank as I walked into the town post office and unlocked PO Box 2061. It was nearly empty. There was just a single yellow slip.

“This was left in my box,” I told the man at the front of the post office.

I walked away from the post office with a lot of mail—and a big idea about human beings: mainly that if you give them something to do, a mission, they will show up. At the end of that month, I marched the love letter bundle for Briana to the post office and mailed it off to her.

“They show you’re not alone and that you’re not struggling for nothing.”

A week later, I got a thank-you e-mail from Briana’s friend. “It’s not that the letters heal you,” she wrote. “They show you’re not alone and that you’re not struggling for nothing.”

After such an amazing response to Briana’s story, I was encouraged to continue. I’d post a new story on the site and then check for letters at the post office every couple of days. The postal worker would emerge from the back room with a heaping stack of letters or a mail crate, sometimes two.

I read every letter, then bundled it up with a note explaining how hundreds of people around the world had come together to write the letters now sitting in the hands of someone who didn’t expect to get mail beyond bills and coupons that day.

We make mistakes. We hurt the people who mean more than the world to us. And we get hurt. We get rejected. We fail tests. We oversleep. We break promises. We break hearts. We doubt ourselves. We drink too much. We laugh too little. And we are hopeful.

We found out about Luke (not his real name) from his daughter. She got a rush of surprise one day when she came home and saw a package waiting for her. She knew it was the love letters she had requested for her father. Luke was in his last round of chemotherapy and having a rough morning when the bundle arrived.

Luke and his daughter sat together for hours and read every last one. She wrote, He was filled with so much energy after reading those letters—he’s even begun to make a collage out of them. He plans to frame the collage and hang it proudly on the wall of his office.

Then there was the soldier and his sister. He had the dirt of both Afghanistan and Iraq deep in the grooves of his boots. PTSD hung on his shoulders like a cloak when he finally came home. We mailed him a bundle. One day he called his sister, crying—sitting on the floor and unable to speak—over the letters strangers had sent cheering for him. She told me that one small act had renewed her faith in humanity.

Above all stories, I will always go back to Matt’s from Ohio. He e-mailed me one night about two years ago. Matt told me he was getting older. His family and he were disconnected. He didn’t have many friends. He was starting to believe he’d leave nothing behind and he’d be forgotten.

The message was sent with no return address attached. There was no way to write back to him, but I hope he reads these words:

Matt, I want you to know: You were wrong to think you’d be forgotten. And I was wrong to think people couldn’t walk into our lives and shift our histories in an instant. Because you did that for me.