What Is King Cake? History and Meaning of the Mardi Gras Tradition

Mardi Gras isn’t subtle, and neither is this sugary, rainbow-colored confection. Find out what king cake is all about—and what’s up with the baby hidden inside.

Mardi Gras is arguably the biggest, flashiest party in the country. With its grand parades, colorful beads, elaborate masks, and booze-filled revelry, you probably think you have a pretty good idea of what Mardi Gras is all about. But there are plenty of things you may not fully understand about this pre-Lenten celebration, including the history behind its many popular traditions and the reason why Mardi Gras float riders have to wear masks. There’s also another sweet tradition that you may have heard of: eating king cake—and finding the “baby” inside of it. But what is king cake, and why is it such an integral part of Mardi Gras?

What is king cake, exactly?

A king cake is a wreath-shaped cake that’s similar to a Danish pastry and traditionally made of brioche, flavored with cinnamon, and embellished with a frosted glaze and gold, green, and purple sugars. Collectively, these shades are the official Mardi Gras colors, and each one of them has a specific meaning. Gold stands for power, green represents faith, and purple represents justice, and overall, the cake symbolizes the unity of faiths. Bakers may offer a choice of fruit or cream cheese fillings and sometimes top it with Mardi Gras decorations. It also comes with a tiny plastic baby hidden inside of it, but we’ll get to that in a moment.

While king cake traditionally is eaten during Carnival season (from January 6 through Fat Tuesday, the day before Lent begins), you can probably get your hands on one whenever you get a craving. “There are people who are baking king cakes year-round now,” says Poppy Tooker, host of the NPR-affiliated show and podcast Louisiana Eats! “In particular, in the fall, when the [New Orleans] Saints start playing, we’ll see king cakes in stores decorated in black and gold sugar.”

In New Orleans, king cake “has even become a flavor,” says Liz Williams, founder of the city’s Southern Food & Beverage Museum. During Mardi Gras, you can find everything from king cake–flavored coffee to spirits.

Why is there a baby in the cake? 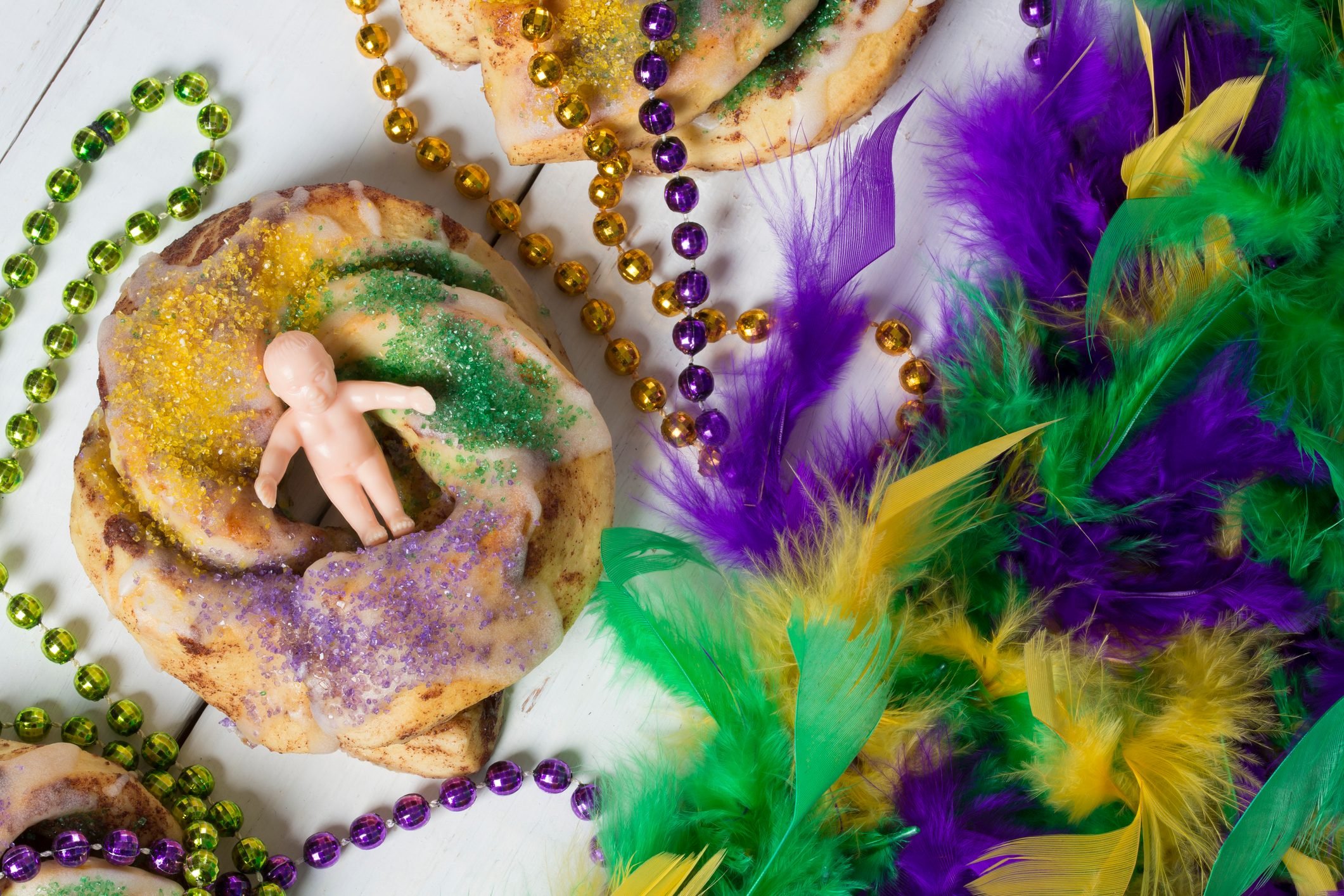 To explain this quirky tradition, let’s start with the king cake’s origins. This dessert is associated with a Christian holiday called Epiphany, also known as the Three Kings Day, which falls on January 6 every year. It commemorates the story of the three wise men visiting the baby Jesus. This might lead you to believe that the baby is supposed to represent the baby Jesus, but this isn’t necessarily the case—or at least it didn’t start out that way.

According to NPR, in the late 19th century, a New Orleans social group called the Twelfth Night Revelers started the custom of hiding a bean inside the cake. Whoever found it in their piece of cake would be crowned the king or queen of the Mardi Gras balls. Later on, the bean was changed to a baby. Donald Entringer Sr., a baker who operated McKenzie’s Pastry Shoppes in Metairie, Louisiana, is credited with starting this tradition in the 1940s. Entringer was asked by a Carnival krewe to produce king cakes containing prizes. Through a friend, he came across tiny plastic babies from a shop and got approval from the health department to add them into his king cakes.

Aside from being the belle of the ball, the recipient is also said to receive good fortune after finding this prize. That person is also supposed to host the next king cake party and, of course, take care of the next king cake. Now that you know what a king cake is and when you eat it, find out why Easter falls on a different Sunday every year.

Where did king cake originate?

While the king cake may seem like an American tradition, its roots can actually be traced back to France, according to Adley Cormier, a historian in Lake Charles, Louisiana. When French settlers came to what is now Louisiana, they brought over their festive traditions, such as Carnival, which became Mardi Gras. “[They] brought those European traditions here and kept them up, although slightly modifying them as they had to deal with what the New World had to offer them, as opposed to what the Old World had in place,” explains Cormier.

France still has a king cake of its own, and it looks nothing like Louisiana’s rainbow-colored king cake. Known as a galette des rois, this humble and more subtly decorated puff pastry with an almond cream known as frangipane is also enjoyed by the French around the time of the Epiphany. Like its American counterpart, the galette des rois stores a surprise. It’s referred to as a fève, which translates to bean in French, but the object is usually a trinket or charm. The festivities at this time of year aren’t limited to France and America. Check out these Mardi Gras traditions from around the world.

The wildest king cakes ever created 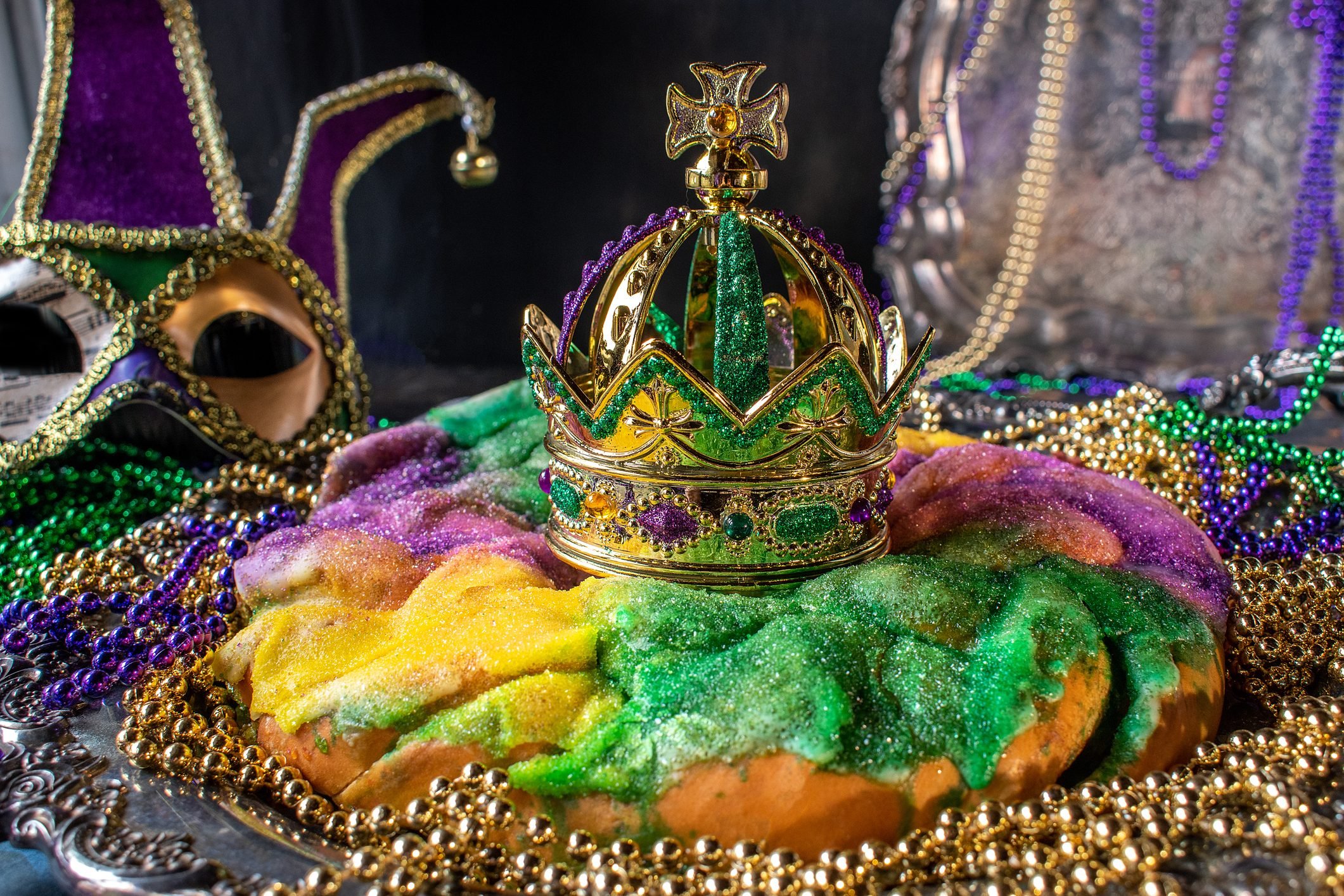 While bakeries can size up their king cakes from miniature to large, imagine a king cake that’s big enough to wrap around a building. In September 2010, Haydel’s Bakery in New Orleans accomplished that feat, creating “the world’s largest king cake” at the Louisiana Superdome. Confirmed by the good folks at the Guinness Book of World Records, 28 full-time employees prepped two ginormous king cakes that each encircled the Superdome. Both rings of king cakes were record-breaking: One weighed in at around 4,073 pounds, surpassing a previous record held by a Houston bakery, while the other weighed 4,068 pounds. That’s a lot of cake!

Bringing Mardi Gras to you

While a trip to Louisiana might not be in the cards right now, especially since 2021’s festivities have been canceled due to the pandemic, you can still get a taste of king cake—by having one delivered right to your doorstep. Here are some yummy options:

When life is back to normal, you might want to have a king cake in New Orleans—or visit one of these other great places to celebrate Mardi Gras.

Why Is Mardi Gras in New Orleans?

What People in New Orleans Think of Mardi Gras

How to Make Beignets 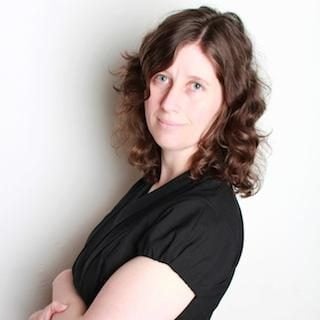 Michele Herrmann
Michele Herrmann applies her love for art, travel, and food -- plus a willingness to trying something new -- toward creating editorial and promotional content that puts the reader right on the page. She regularly contributes features to TimeOut New York, amNY, Orbitz, and Trip.com. Past publications include Yahoo, BudgetTravel, and Shermans Travel. She also has completed projects for SLE Lupus Foundation, the New York Travel Festival, and Bigelow Tea.

The Real Reason Ice Cube Trays Have Flat Spots on Them
If You See a Yellow Cap on Coca-Cola, This Is What It Means
40 of the Latest and Greatest Ways to Reduce Your Carbon Footprint at Home