Affect vs. Effect: What’s the Difference?

That one little letter makes a big difference. 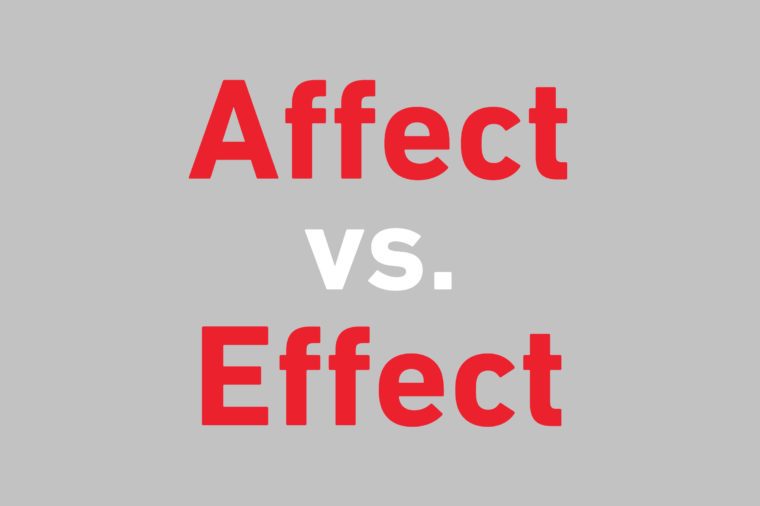 It’s so often the case in the English language that two words sound similar, or have similar meanings, to the point where even skilled native speakers use one when they mean the other. And while there are scores of words and phrases everyone confuses, “affect” versus “effect” is a particularly confusing situation. There’s just one letter’s difference between them, and most people pronounce them exactly the same. The fact that they mean pretty much the same thing—they both describe change—makes matters even more confusing. So what’s the real difference between affect vs. effect, and when should you use each?

Affect vs. effect: Parts of speech

The difference between affect vs. effect lies in the parts of speech. “Effect” is a noun meaning “a result or consequence.” For instance, you could correctly say, “The effects of climate change can be felt worldwide” and “This medicine may have some side effects.” “Affect,” meanwhile, is a verb that means “to act on in a way that produces a change.” “Affect” can have both positive and negative connotations: “Praise from a teacher can affect students’ performance in the class.” “Pulling a muscle affected my sports performance.”  Either way, though, “affect” is a verb that must be used with an object, per dictionary.com. So you don’t just “affect,” you “affect” something or someone.

So something can affect you, and it can also have an effect on you. They really do mean virtually the same thing, so the meaning is not the issue; the issue is making sure you’re using them as the correct parts of speech. One way to keep affect vs. effect straight is to remember that “affect” starts with “A,” and so does “action,” so “affect” is an action word (a verb). You can see why affect vs. effect is one of the homophone pairs people confuse all the time.

Other uses of “effect”

“Effect” has a few more uses that are also pretty common; it’s the correct choice for idiomatic expressions like “take effect” and “in effect.” A new rule “takes effect”; it doesn’t “take affect.” You’ll also see the adjective “effective,” which also starts with “E” and means “producing the intended result.” “The bad guy’s plan was surprisingly effective in Avengers: Infinity War” is the correct use of “effective.”

Affect vs. effect: Exceptions to the part of speech rule

Unfortunately, as it seems is always the case, there are exceptions. There is, alas, also a noun form of “affect” and a verb form of “effect.” However, these uses of the words are far, far less common. You see and hear them pretty rarely, and, when you’re confused about “affect” versus “effect,” you’re most likely using them in the contexts mentioned earlier. But, now that we’re already down the grammar rabbit hole, here are the less common forms, explained.

“Effect” as a verb means “to bring about,” and you’ll see it almost exclusively used before “change,” as in “Young people have a lot of power to effect change.” “Affect,” as a noun, describes a feeling, emotion, or demeanor, and it will often be preceded by an adjective: “I noticed my friend’s sad affect and asked if he was OK.” But again, those most likely aren’t uses of the word that you’ll see or use often. Next time you’re pondering which to use, remember that “affect” is a verb meaning “alter,” and “effect” is a noun meaning “consequence.” A monumental life event can affect you so much that you may experience the effects for years to come. The difference between affect vs. effect is pretty hard and fast, but there are still plenty of grammar rules you’re probably safe ignoring.