17 Animals That Live Only in the Amazon Rainforest

The mighty Amazon River and its surrounding rainforest is home to millions of different species of animals, with new ones being discovered regularly. Here are the ones you won't find anywhere else in the world. 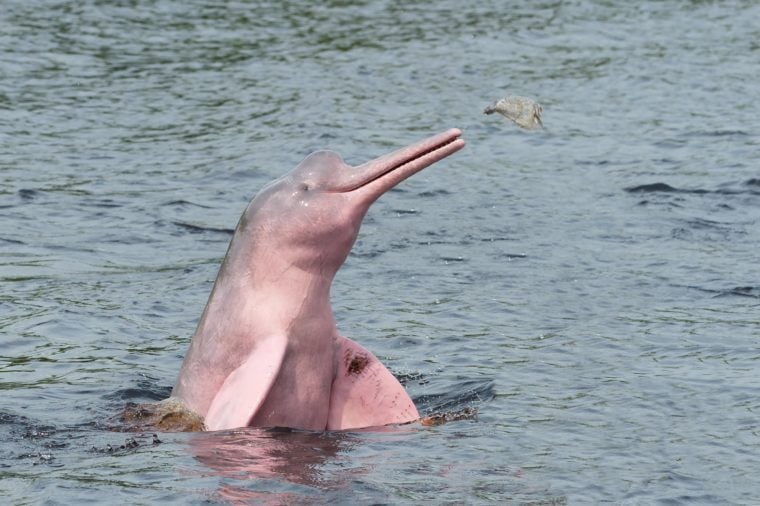 Of the animals that live within the Amazon River itself, this pink freshwater dolphin is a crowd favorite. Also called a botto or a pink river dolphin, tens of thousands of the long-nosed creatures remain. But, because of threats caused by dams and by water and food contamination from mining, the dolphin is classified as vulnerable by the World Wildlife Fund (WWF): Some fishers even injure or kill them, believing they're a threat to diminishing fish stocks. Steps are underway to help. For example, in 2018, Peru created a new national park, Yaguas, near the Colombian border to help protect the pink dolphins and the Amazon's other unique wildlife. Pink dolphins remain one of the 20 unexplained mysteries of the Amazon rainforest. 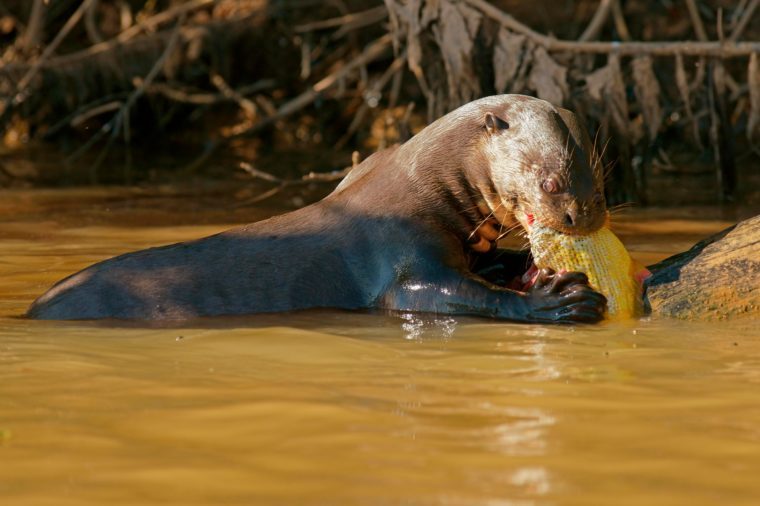 This endangered otter is found only in remote parts of the Amazon where it's estimated only 2,000 to 5,000 remain. Habitat loss continues to threaten them, though most were wiped out by hunters wanting their luxurious fur. Jeremy Goodman PhD, the executive director of Roger Williams Park Zoo, describes the mammals as "one of the most endearing species" and "very loud." You can see and hear the mammals at his Providence, Rhode Island zoo. One of the best spots for seeing them in the wild is at Peru's Heath River Wildlife Center. 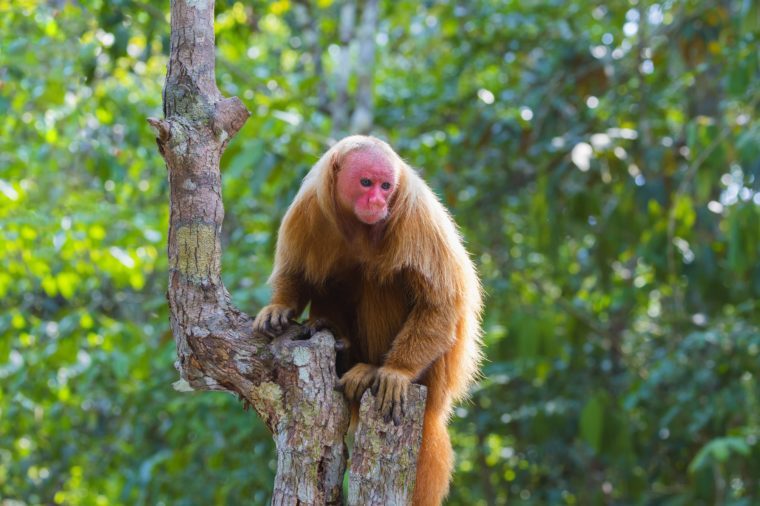 Unique Amazon mammals also live in the rainforest trees throughout the river basin. The bald uakari is one of them. Their bright red faces look a little devil-like when they bare their teeth and those jaws are powerful enough to crack open a Brazil nut. These short-tailed primates eat only fruits and veggies but are threatened by humans who sometimes hunt them for food. A bigger risk for the primate is deforestation. The extinction of animals like the balk uakari is one of the things that could happen if the Amazon rainforest disappeared. 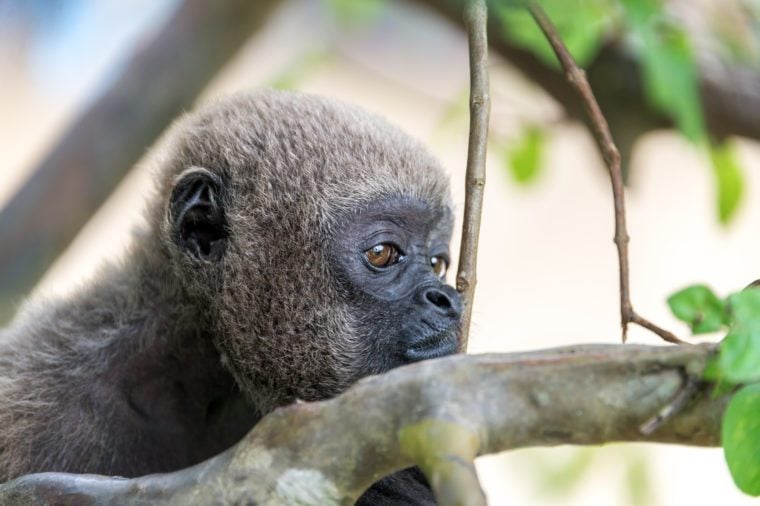 Gray woolly monkeys live at altitude in the fog forests of the Amazon, primarily in Peru and Brazil. About 18 to 23 inches long, they have a long thick tail and a potbelly. In fact, their name in Brazil is macaco barrigudo, which means "big-bellied monkey." They're classified as threatened. The New England Primate Conservancy reports that over the last half-century, 50 percent of the population has been lost, largely due to clearcutting of forests for mining and agriculture. Babies are also kidnapped for the illegal pet trade and their mothers killed in the process. These are more of the endangered animals that could disappear in your lifetime. 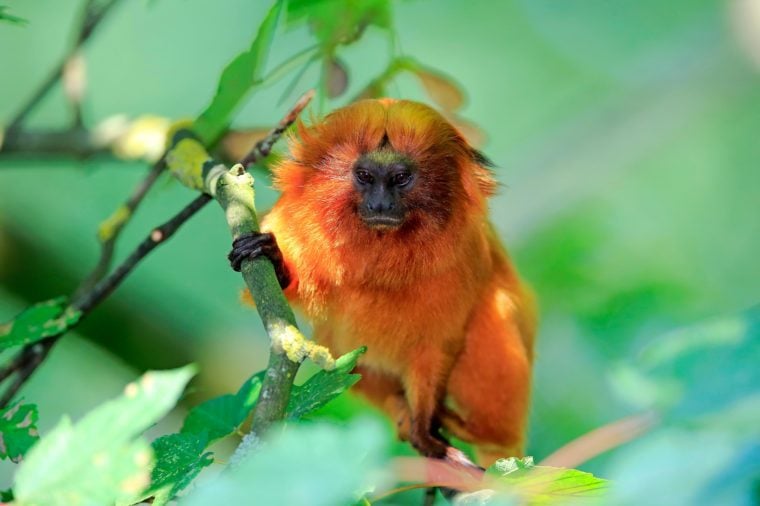 The endangered golden lion tamarin, also called the golden marmoset, is found mainly in Brazil's rainforests. As the rainforests are logged and turned into agricultural and industrial land, the primates are at serious risk, according to National Geographic. These cuties are about 8 inches long and have manes like African lions. Males help raise their offspring, which seems especially needed because most tamarin families have twins. There are more great animal dads that contribute their fair share in this list of 23 "facts" about animals you have all wrong. 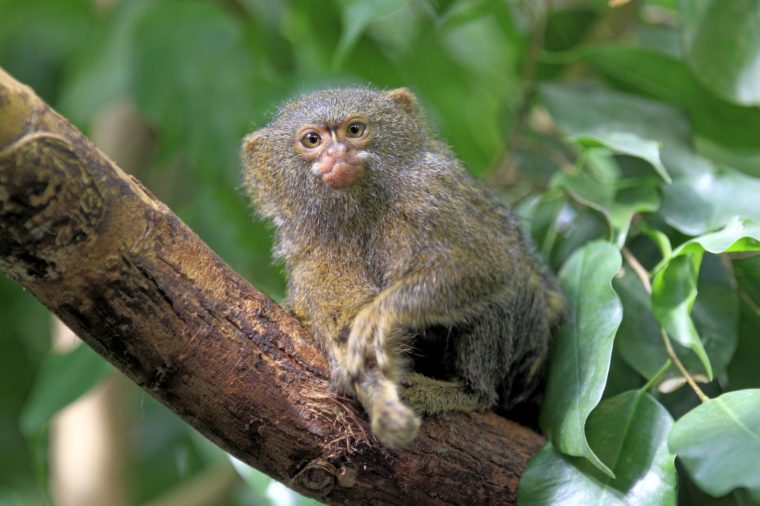 Pygmy marmosets, sometimes called pocket monkeys, are even tinier than they appear because their fur is so fluffy. Weighing only five ounces, they could easily fit into the palm of your hand. They like to live high in the treetops where they can find their favorite food: tree gum and sap. They'll eat fruit and insects if necessary. They have a high infant mortality rate, due to starvation and falling out of trees, with only 25 percent of babies reaching adulthood. Like the gray wooly monkey, the pygmy marmoset is kidnapped and sold illegally as pets. Deforestation is also a threat. They're the smallest of all monkeys and one of the 10 cutest tiny animals from around the world. 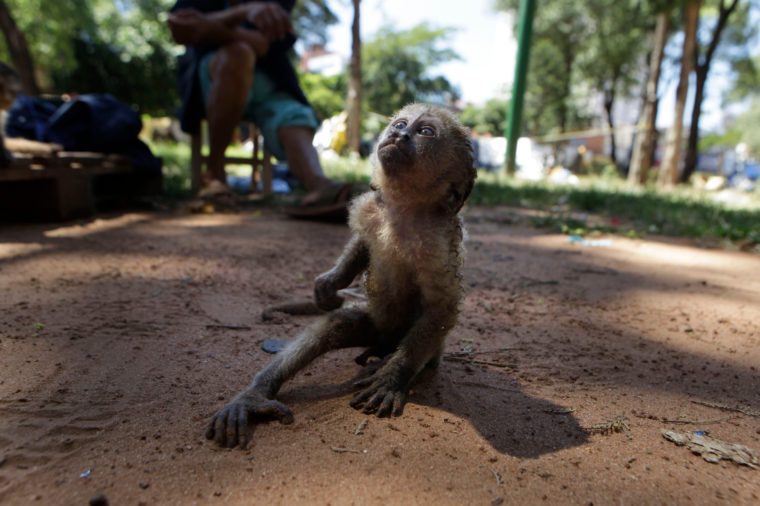 This tiny brownish-gray monkey is critically endangered. That's just one step away from being extinct in the wild, according to the IUCN's Red List of Threatened Species. Humans are taking over these creatures' territory to build roads, farms, and housing, and the monkey is sold on the black market as meat. It lives only in north-central Peru. The Rainforest Trust calls it "Peru's most imperiled primate" and is raising money to create a conservation area. 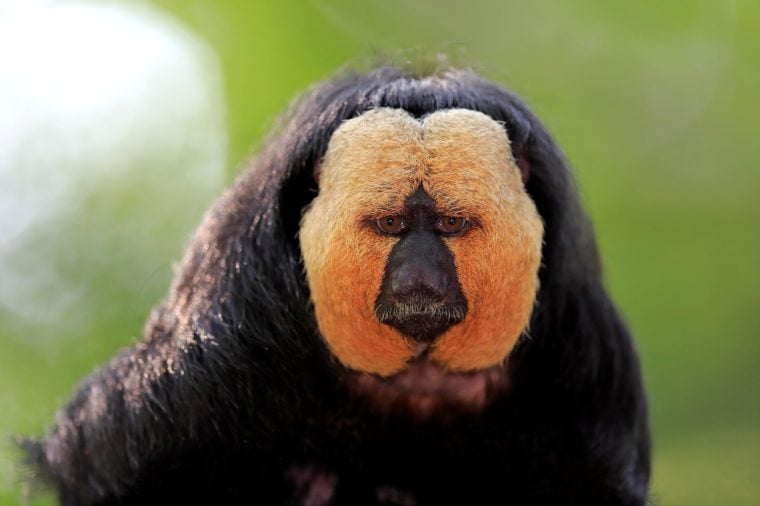 Once you see a picture of a pale-headed saki monkey, you'll never forget this distinctive-looking primate. The males have a short-haired white face and a long-haired black body, while females are grayer and have a stripe on their faces. They live in the trees of the Amazonian rainforest. These monkeys are strong jumpers and have been seen leaping over 30 feet to escape a predator. Living nearby are various monkey cousins, including the brown-backed bearded saki monkey which is found in Brazil's Amazonian Rio Negro region. These are more animals that are only found in one place in the world. 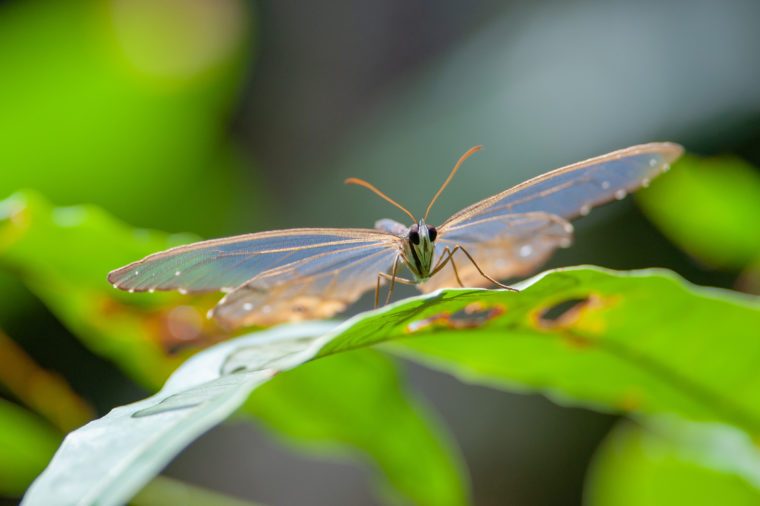 Living in the deepest shade of the Amazon rainforest from sea level to almost 5,000 feet is the haetera piera butterfly, also called the amber phantom. Its wings are transparent with a reddish or amber tint. They're most easily spotted at dusk when they feed on rotting fruits and decomposing mushrooms on the forest floor. Here are 6 delightful facts about butterflies, including that they're almost as old as dinosaurs. 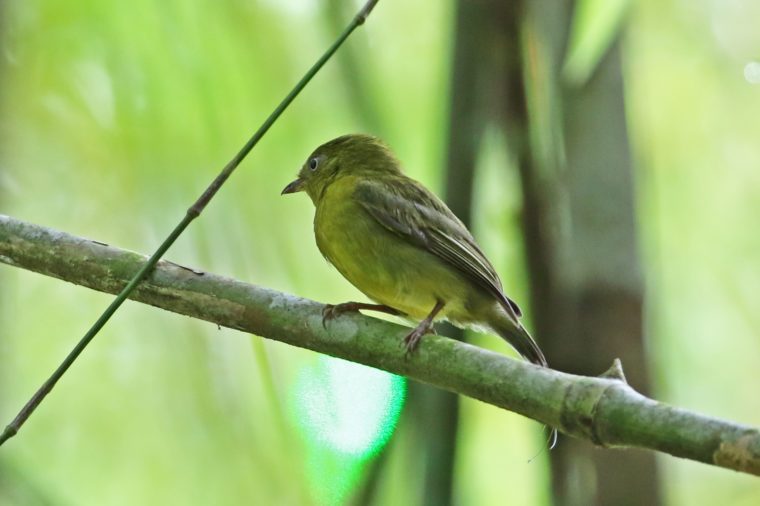 Many birds are endemic to the Amazon rainforest too. The wire-tailed manakin is a blackbird with a bright yellow face and belly that looks like it's wearing a red hood. Found only in the western Amazon Basin, it's known for having one of the bird world's most elaborate mating dances. Birdwatchers have a good chance of seeing the elusive bird with Traverse Journeys' Rainforest Encounter Ecuador tour because manakins frequent a spot near their ecolodge.