Canada has officially left all of America saying, "...eh?" 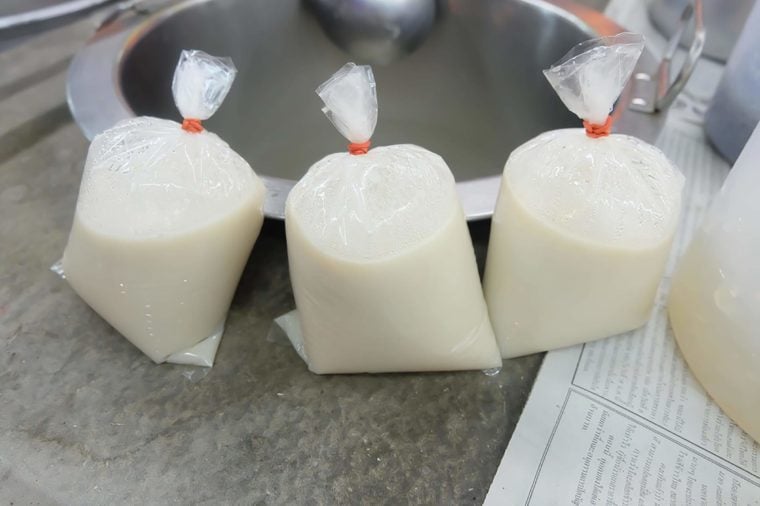 If you’ve ever visited our neighbor to the north, you may have noticed something peculiar about how milk is sold in grocery stores. You won’t always find milk in a familiar carton or jug—but you may find it in a nine-pound clear plastic bag. But why? We need answers, Canada.

According to foodnetwork.ca, drinking milk out of bags isn’t new—in fact, Canadians have been doing this since the late 1960s. Before Canadian food and packaging company DuPont unveiled their thin, plastic milk bags in 1967, they used glass bottles instead. Ultimately, all of those glass bottles weren’t exactly cost-efficient—and, with Canada’s conversion to the metric system in 1970, it was far easier to comply with metric units in bag form that it was to redesign and manufacture new bottles and jugs. So, the plastic milk bag was born. Today, drinking milk out of a bag is most popular in Quebec, Ontario, and the Maritimes. By the way, this is why Americans refrigerate their milk and Europeans don’t.

“It’s estimated that 75 to 80 percent of the milk sold in Ontario is bagged, and across Canada, about 50 percent of milk drinkers buy the bagged variety,” according to foodnetwork.ca. Surprisingly, Canada isn’t the only place where people drink their milk out of bags. “Milk bags can be found in many other countries, such as South Africa, Argentina, Uruguay, Hungary, and China. In Israel, there’s a Kankomat: soft, plastic milk bags with a knife built into a plastic container.”  And make sure you know why you probably shouldn’t buy your milk at Costco.

So, there you have it. Canada drinks its milk out of plastic bags because it’s more cost-effective. Next, don’t miss these 20 other food facts that will change the way you eat.