This Is Why People Are So Afraid of the Number 13

There are a few reasons this number gets such a bad rap. 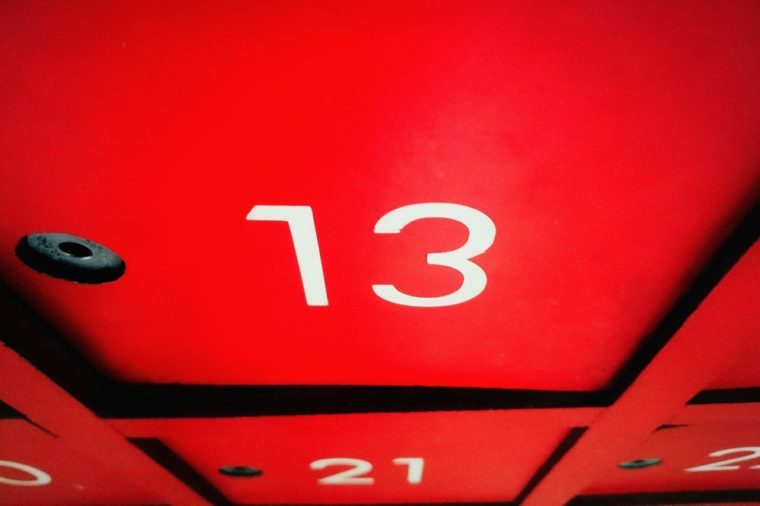 There are plenty of common fears that, even if we don’t have them ourselves, we totally understand: spiders, heights, creepy clowns. And then there’s fear of the number 13. It’s a number just like any other, and yet there are horror movies about it; some buildings intentionally have no 13th floor and plenty of couples avoid getting married on the 13th of the month. The technical name for fear of the number 13 is triskaidekaphobia, and while it is rare, about 9 to 10 percent of Americans are, at the very least, uneasy about the number 13. Check out what being afraid of Friday the 13th says about you.

What makes this number so scary? Well, there’s no single reason behind the widespread fear. Historians have pinpointed a few potential reasons for 13’s prevalence as an unlucky number.

The most popular theory about the origin of fear of the number 13 is biblical: there were 13 diners at the Last Supper. The 13th to arrive was Judas, who betrayed Jesus. In Norse mythology, too, a table of 13 proved unlucky, to say the least. According to one of the myths, the primary 12 gods were dining together peacefully until the god of mischief (and frequent superhero-movie villain) Loki showed up. As soon as this 13th guest arrived, chaos and carnage ensued. The superstition that a table of 13 diners spells bad news even made its way into Harry Potter.

On its own, there are no problems with the number itself. It’s 13’s proximity to the number 12 that makes it look bad, according to scientists and mathematicians. In many ancient cultures, 12 was considered to be a perfect number. Civilizations as far back as ancient Sumer based their systems of telling time around the number 12. There are 12 hours on a clock, 12 months in a year, and 12 phases of the Zodiac. Twelve is also the largest number that also has one syllable (in English, at least). As the number immediately following this “perfect” one, 13 seemed flawed, inspiring unease throughout the ancient world. Fear of the number 13 isn’t the only superstition to have ancient origins—these 10 other superstitions do too.

So factors from both myth and math have combined to make this particular number more maligned than any other, inspiring fear of the number 13 in many. The uneasiness about the number, dating back to ancient times, has been compounded over the years to create a very real, modern fear. Now that you know the back story behind the fear of the number 13, learn about more unusual, but very real fears you had no idea existed.