Read this, and you will never look at a hot dog the same way again. 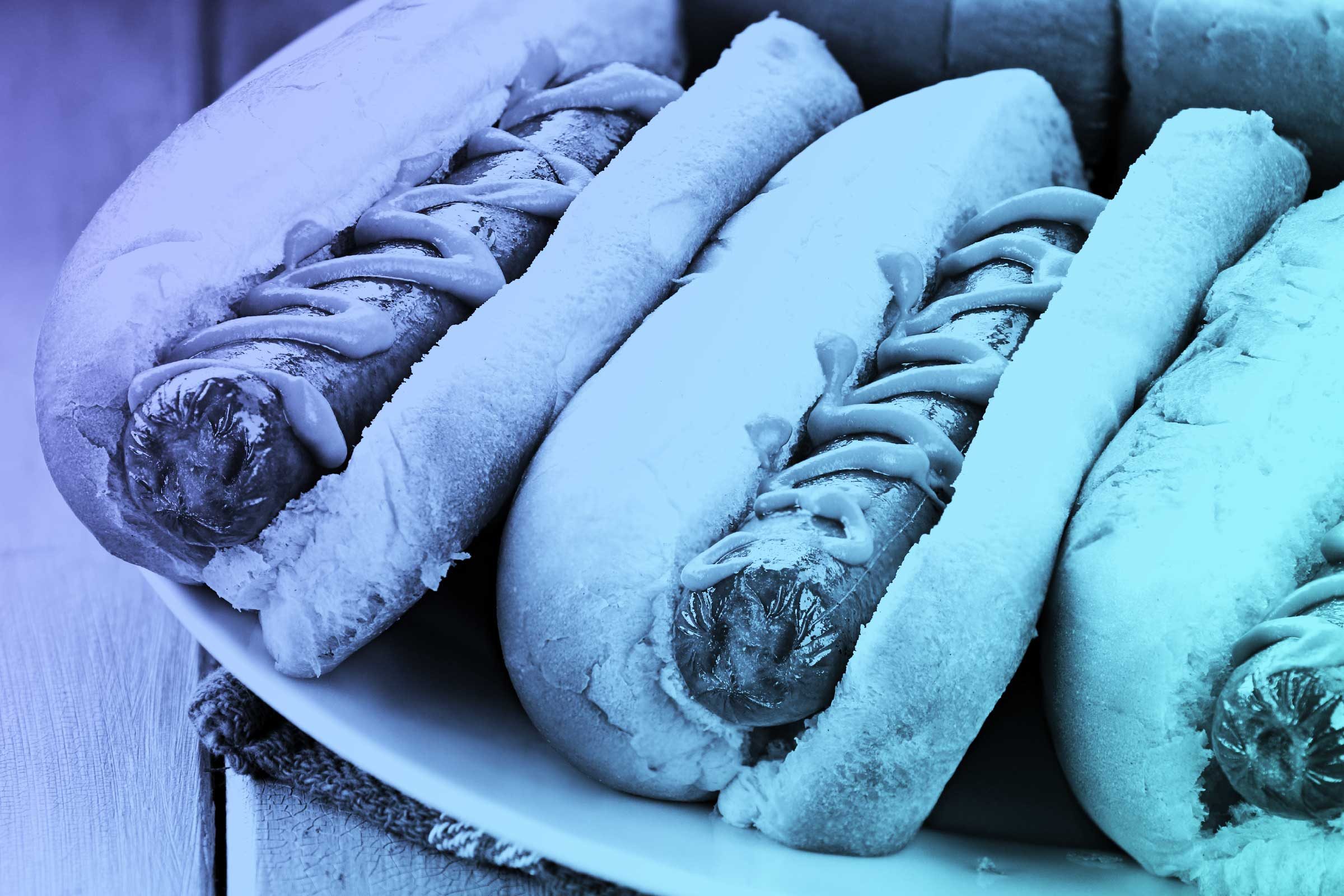 How full do competitive eaters get? Think more than four Thanksgiving dinners' worth

Joey Chestnut, the eight-time winner of the Nathan’s Famous Hot Dog Eating Contest, downed 69 dogs in his 2013 victory. That adds up to a staggering 21,321 calories, or more than four-and-a-half times a typical Thanksgiving dinner (around 4,500). It’s also the number of calories that most people take in more than eight and a half days. Want to give yourself mental heartburn? Picture stockpiling an entire week's worth of food—then eating it all at once. Yikes! In case you're wondering what happens to your body when you binge eat on Thanksgiving, here it is. 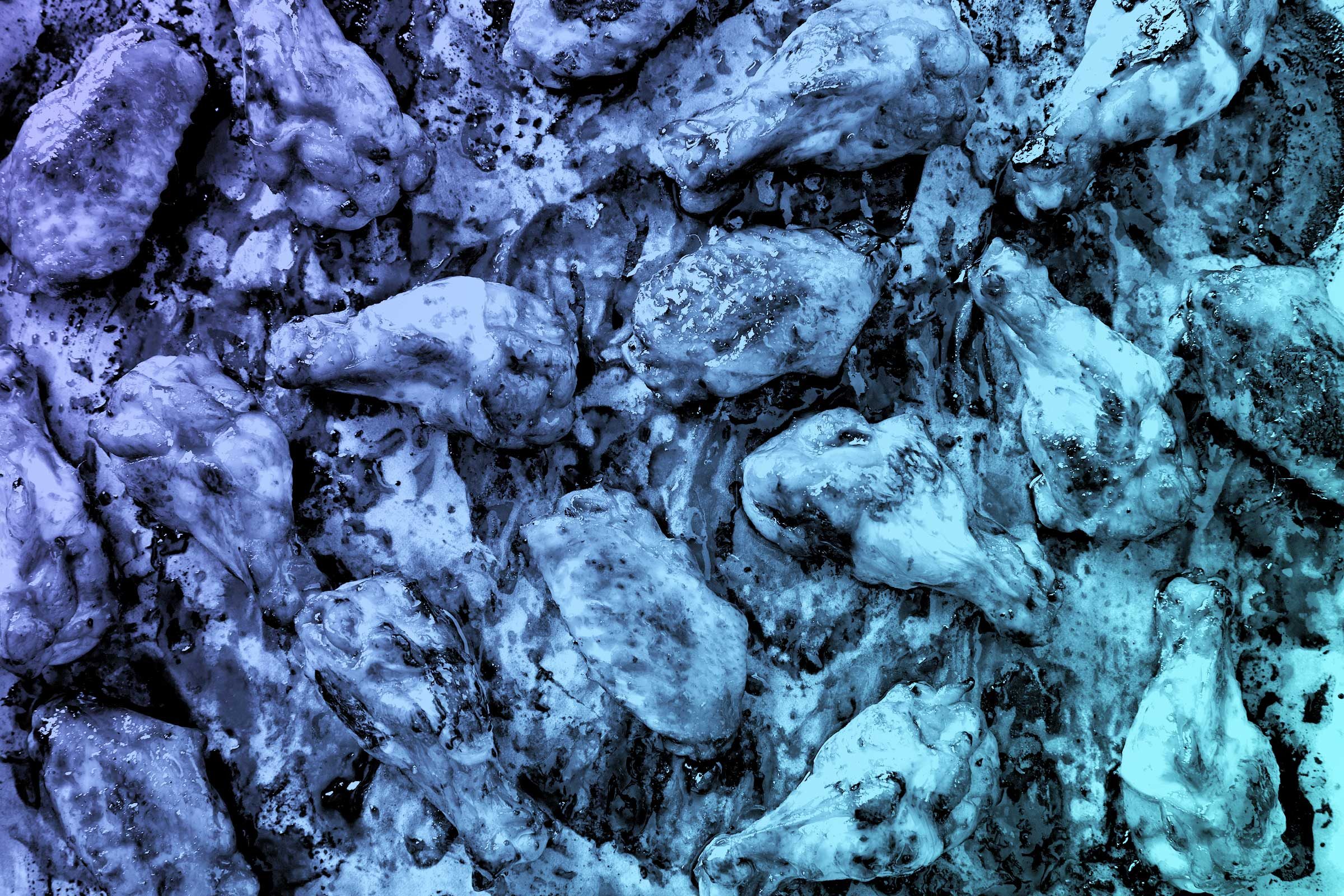 The eating speed will make your head spin

Ever read about competitive eaters and thought, “I really like eating wings or hot dogs or pizza or cheesecakes; I bet I could do that”? Eating contests have strict time limits to intensify their challenges. Nathan’s Hot Dog Contest is a measly 10 minutes long. Chestnut eats nine hot dogs per minute in the beginning, then slows to a rate of 5.9 hot dogs per minute. And remember: The contest requires eating a hot dog plus its bun. While Philadelphia’s Wing Bowl lasts a relatively leisurely 30 minutes, winners put away more than 430 wings in that time, or more than 14 wings a minute. Still think you can do it? Even if you're not a competitive eater, you've still probably been eating wings all wrong. 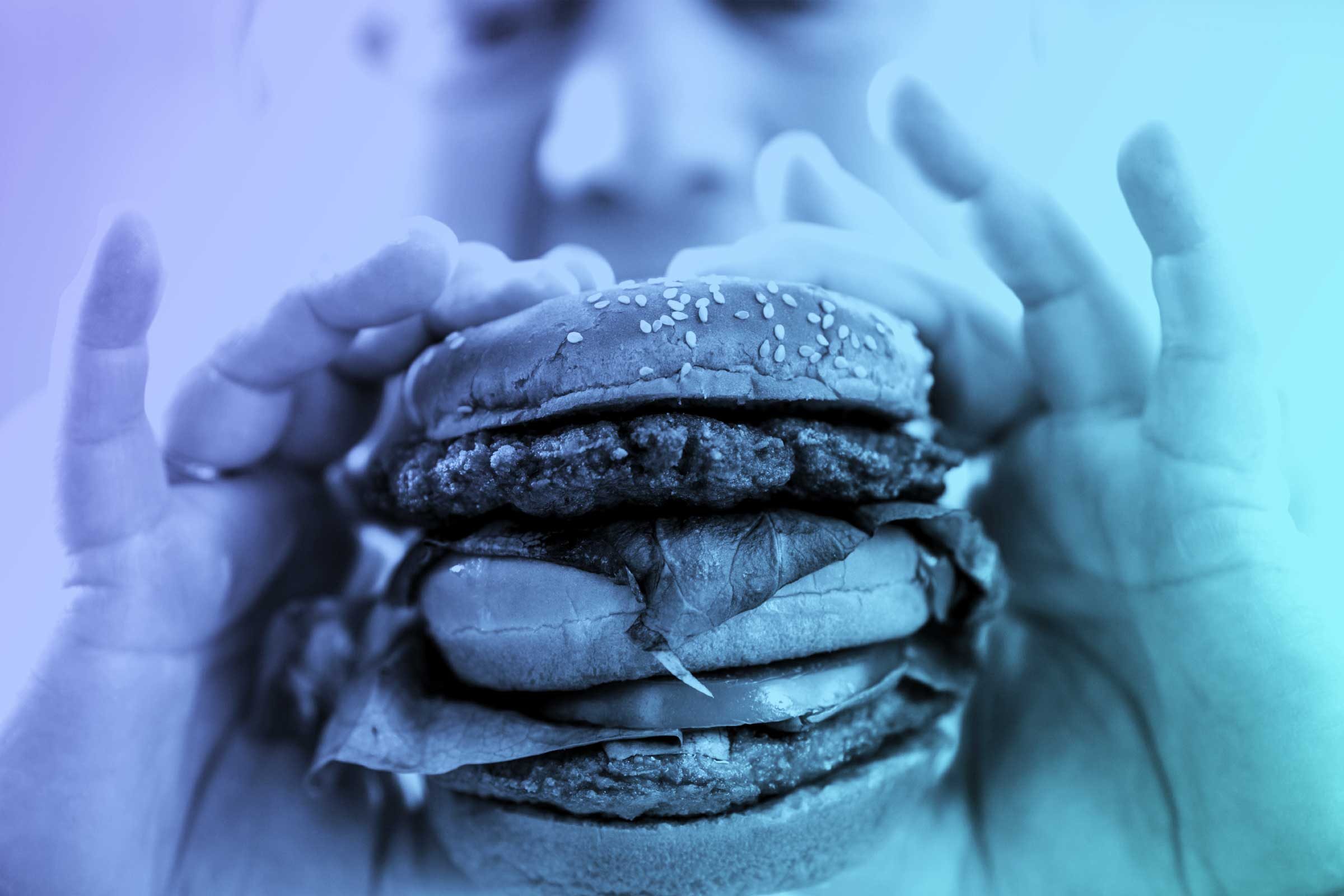 Competitive eaters practice by eating and drinking vast amounts in order to stretch out their stomachs for competition. For six weeks before the 2015 Nathan’s Famous Hot Dog Eating Contest, Matt Stonie trained by eating up to 60 hot dogs in a sitting … three times a week. (He won with 62 dogs in 10 minutes.) Champions may go through 30 such trial runs before the actual contest. Stonie also followed some of these meals with nearly a gallon, or 128 ounces, of water. In prepping for a chicken wing contest, he might consume 200 wings at a time. Now consider that scientists guess the average stomach holds 0.06 to 0.45 gallons' worth of contents at its maximum—this means eaters must transform their stomachs in unnatural ways. In a 2007 University of Pennsylvania study, researchers looked at the stomachs of two men—a normal eater and a competitive eater—as they ate as many hot dogs as they could eat in 12 minutes. They described the eater’s stomach as a “massively distended food-filled sac occupying most of the upper abdomen.” Even these eaters, though, might be daunted by the world's biggest burger! 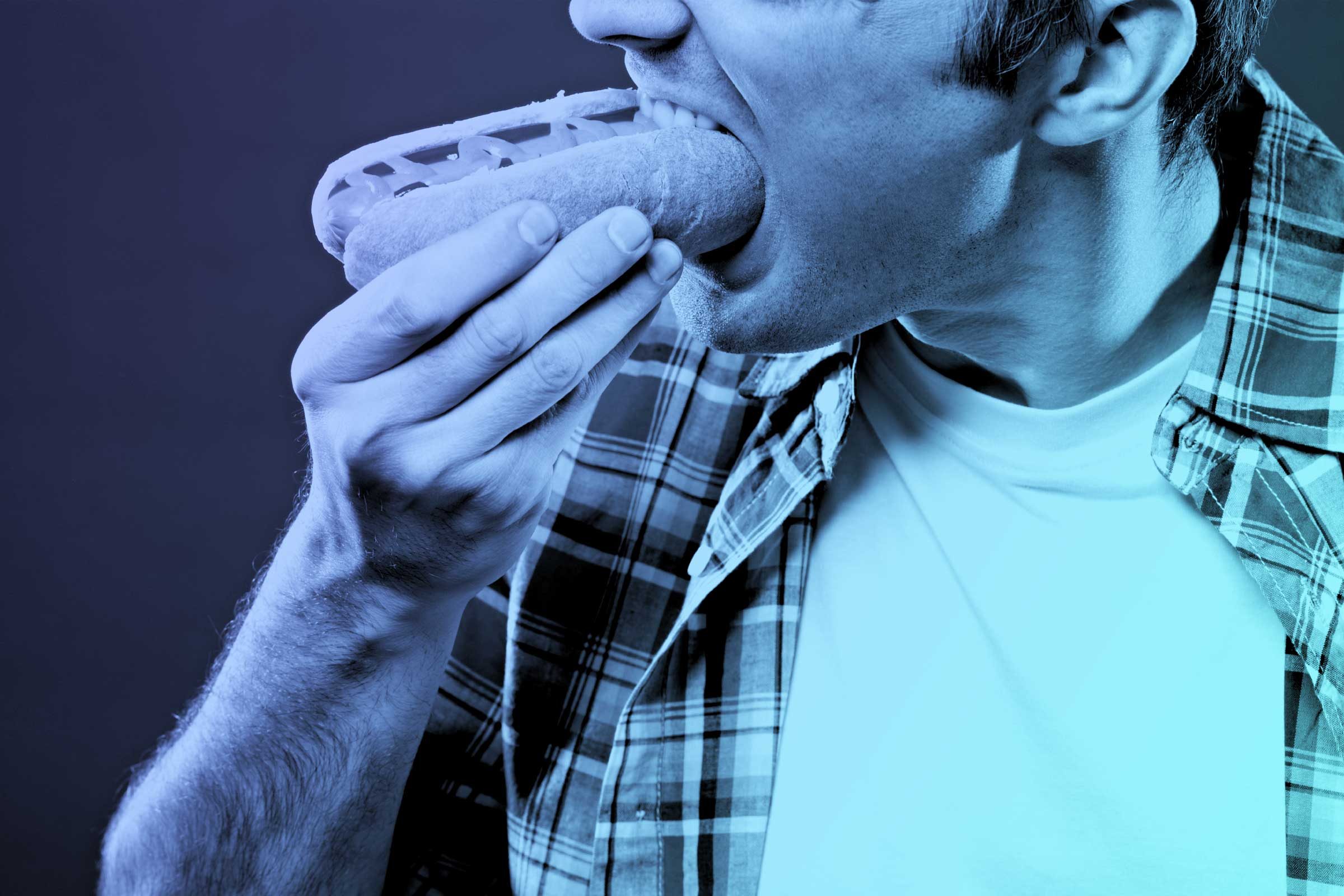 They completely mess with their body’s natural signals and reflexes

In this same study, researchers found that through training, competitive eaters turned off their satiety reflex: that “enough” feeling our body sends to our brain when we’ve had our fill. Competitive eaters also manage to switch off peristalsis—the normal contracting and relaxing motion that enables stomachs to digest their contents—while they're chowing down. Check out these mind-blowing facts about the human body. 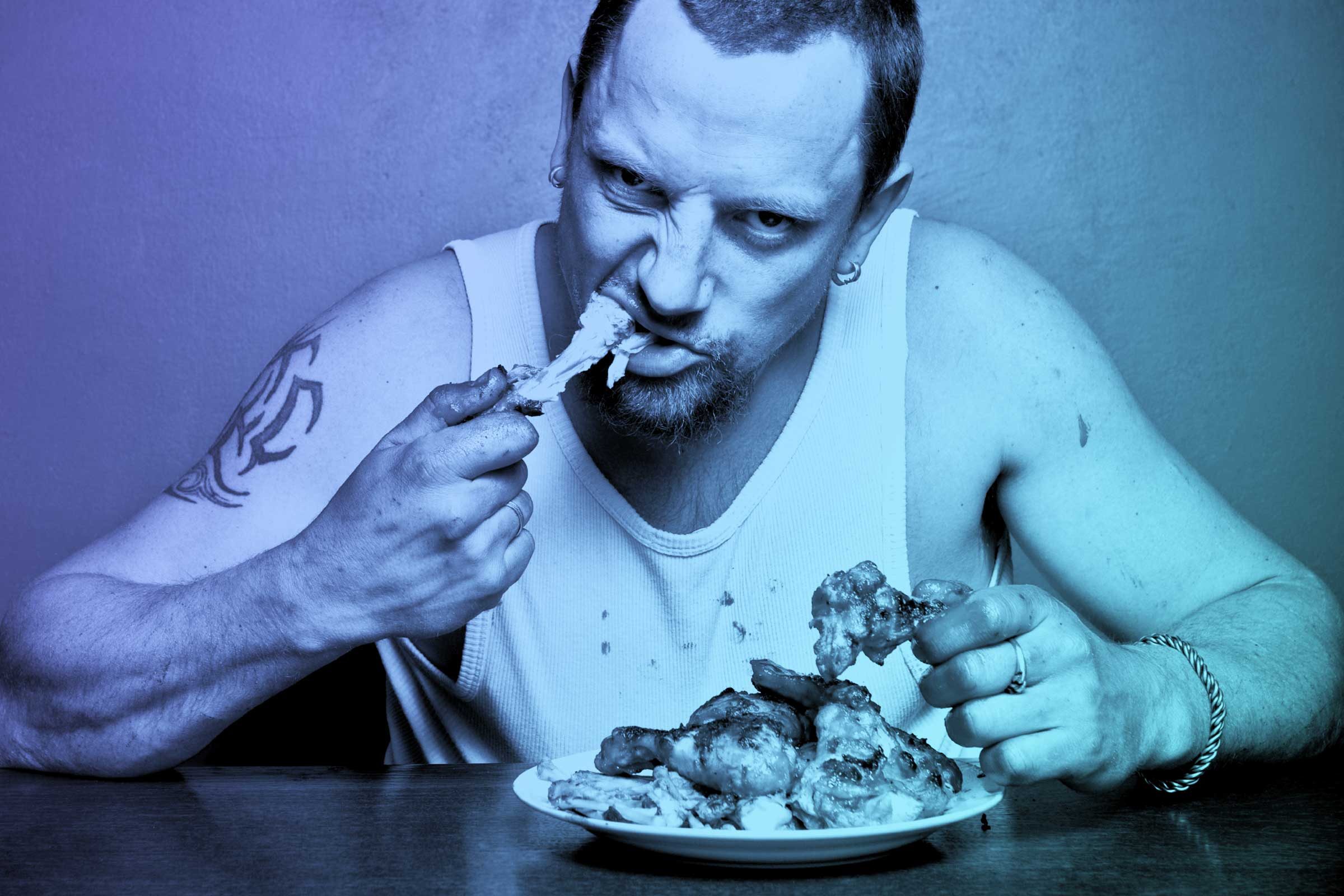 Competitive eaters do very little chewing in contests, but a great deal of swallowing. In training, eaters learn to suppress their gag reflexes so they can move giant clumps of food into their stomachs ASAP and make room for the next mouthful. Here are the scary things that happen to your body when you eat too fast. 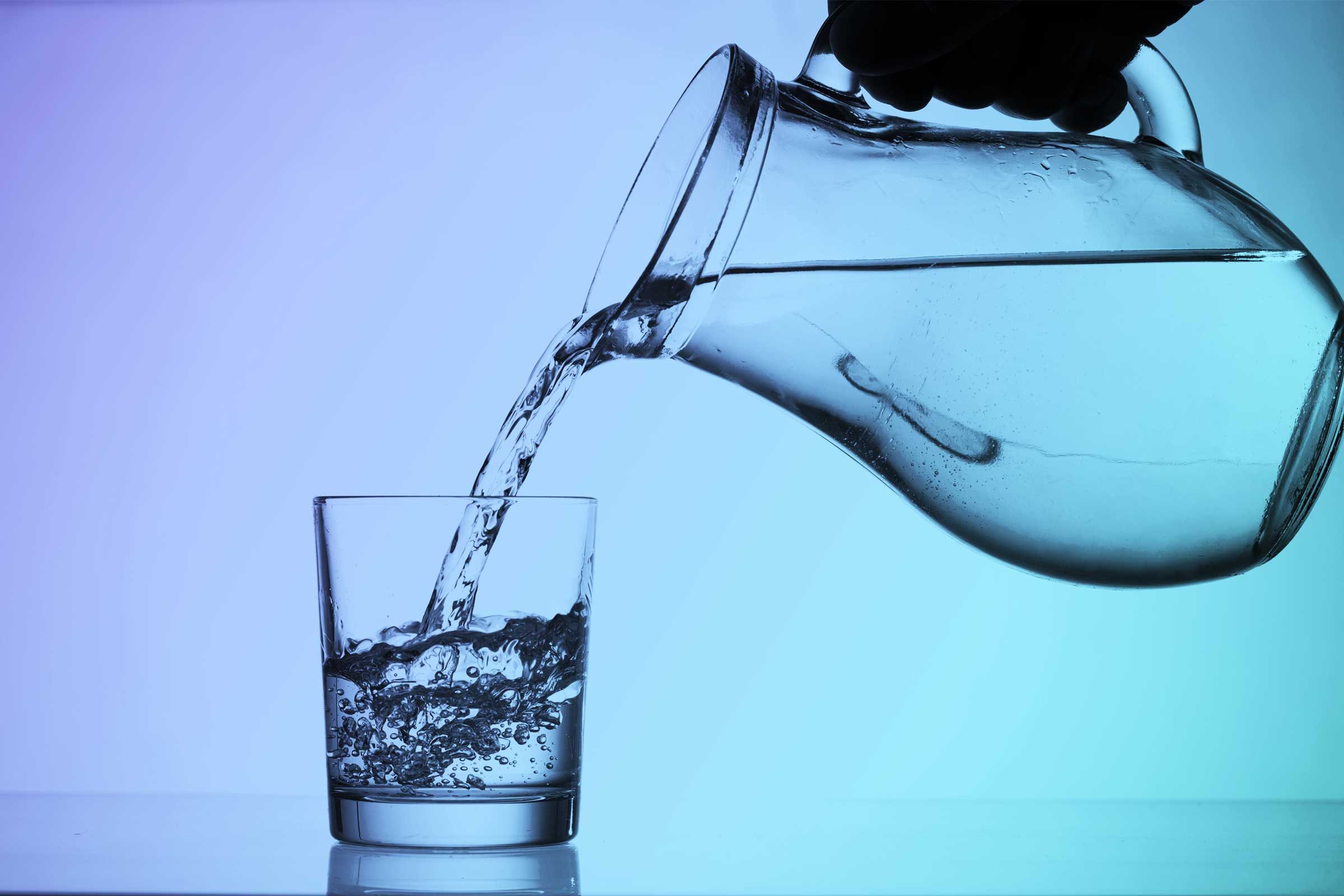 To swallow super-sized portions, you need LOTS of liquid

Liquid also prevents competitive eaters from choking. Stonie swears by swigging microwaved Powerade (cold water can make your throat constrict) while he competes. Some contests, like the Nathan’s Hot Dog eat-a-thon, prohibit drinking liquids, but participants are allowed to moisten food with water. Takeru Kobayashi, who won the Nathan’s Famous Contest seven times, favors water heated to the point where it’s almost unbearable to touch. If you eat too much, these are the steps you should take to help your body recover. 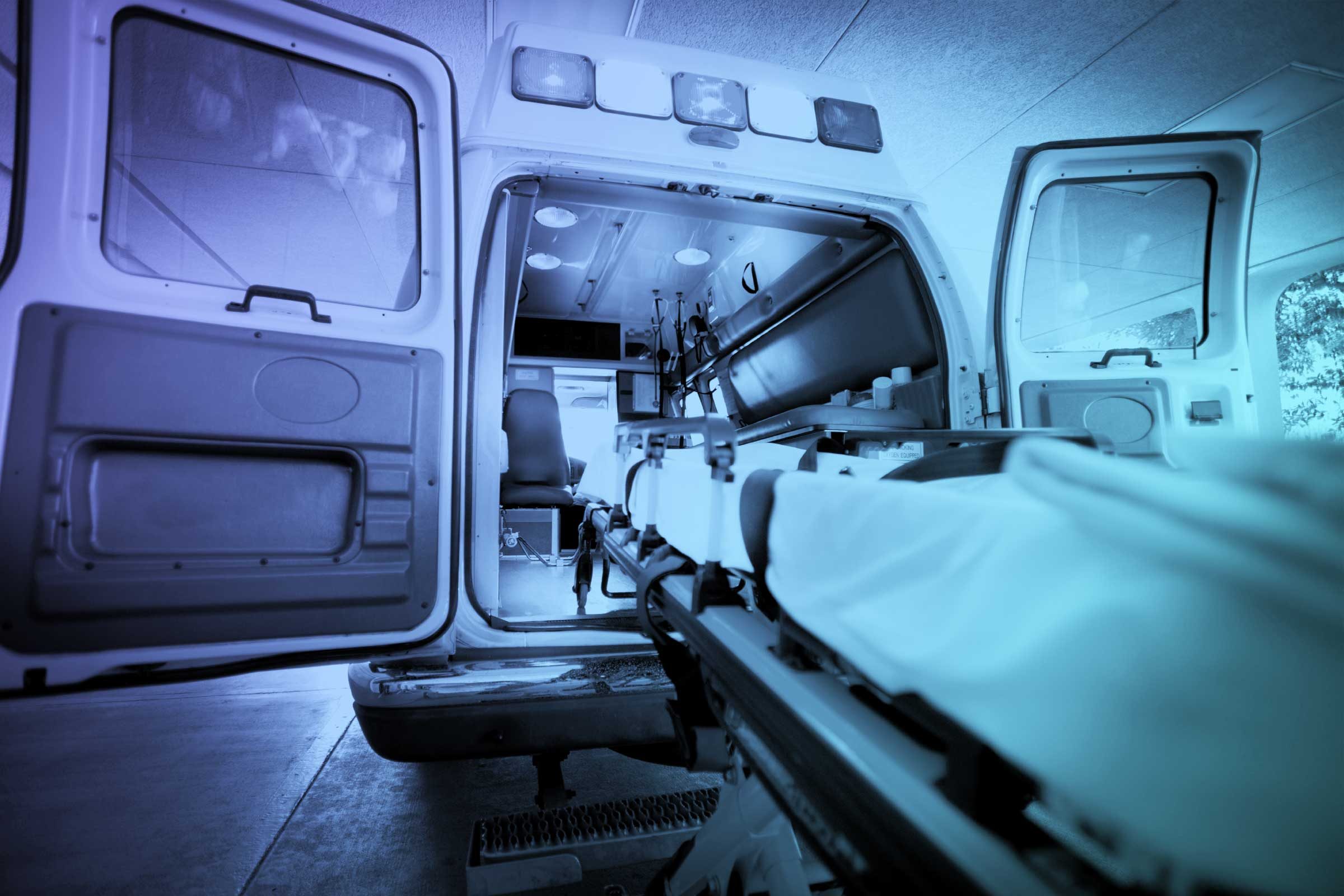 It’s thought that four quarts, or one gallon, of food is enough to trigger a stomach’s “rupture threshold.” During eating contests, competitive eaters consume several times that amount at a time. A stomach rupture can lead to a potentially lethal infection. Another danger is water intoxication—drinking too much water is seriously dangerous. It can lead one’s sodium levels to plunge, which can lead to brain swelling and coma. In 2007, a California woman in her late 20s entered a contest in which participants vied to drink the most water without urinating. She drank two gallons of water and, hours later, was found dead at home. Since competitive eating is a relatively new sport, no long-term studies have been conducted on participants. But in the University of Pennsylvania study, researchers wrote, “We speculate that professional speed eaters eventually may develop morbid obesity, profound gastroparesis, intractable nausea and vomiting, and even the need for a gastrectomy. Despite its growing popularity, competitive speed eating is a potentially self-destructive form of behavior." 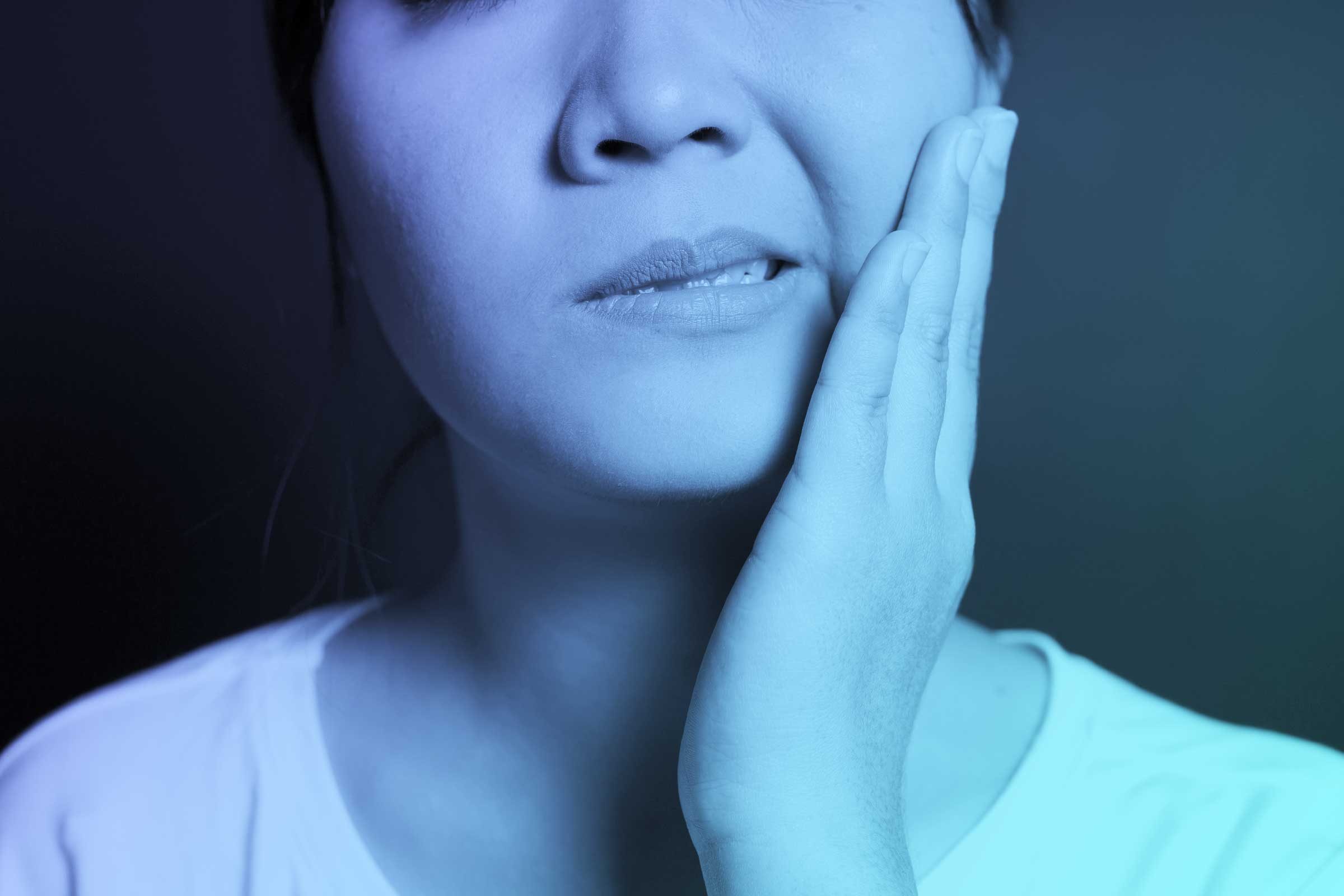 Chewing is another critical part of training

While no deaths have been reported in contests run by the International Federation of Competitive Eating (and the group requires EMTs on site at every event), there has been one injury logged: a jaw fracture. Even though competitive eaters chew relatively little in competitions compared to how much they have to swallow, they still chew an unnatural amount. So eaters exercise their jaws in advance with gum, chewing up to 20 pieces at once. Other eaters disdain gum and practice by chewing on the silicon tubing used by people recovering from jaw surgery and children with autism. 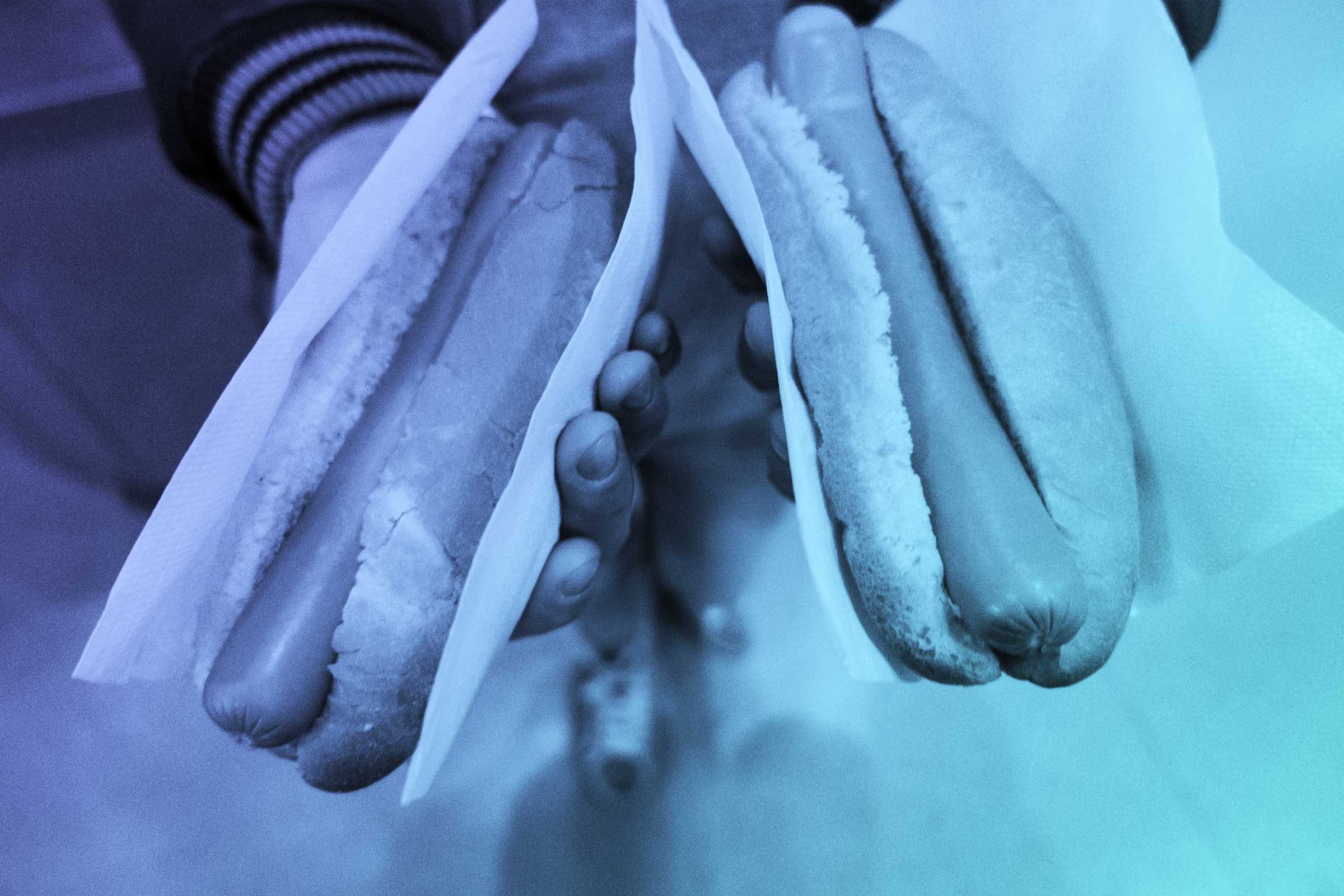 Competitive eaters need quick hands. When a contest is five or 10 minutes, every second matters, so if a competitor can move food to their mouth even a little bit faster than opponents, they’ll have an edge. Serious eaters also come up with a plan of attack in advance. Kobayashi is credited with transforming Nathan’s contest in 2001 with his method, dubbed Solomonic. Using it, he was able to accomplish the competitive eating equivalent of beating the five-minute mile: He ate 50 dogs, leaving the previous record of 25 in the dust. Kobayashi breaks each hot dog in half, eats both halves at once, and then eats the moistened bun. While he’s eating, he's maneuvering the next piece to his mouth and plotting the next move. Buffalo chicken wings, of course, require a whole other tactical approach. For instance, do you attack the drums first? Or the flats? What's the fastest way to strip the meat and skin off? Do you pause to dunk them in blue cheese sauce? (We can answer only the last question: No.) 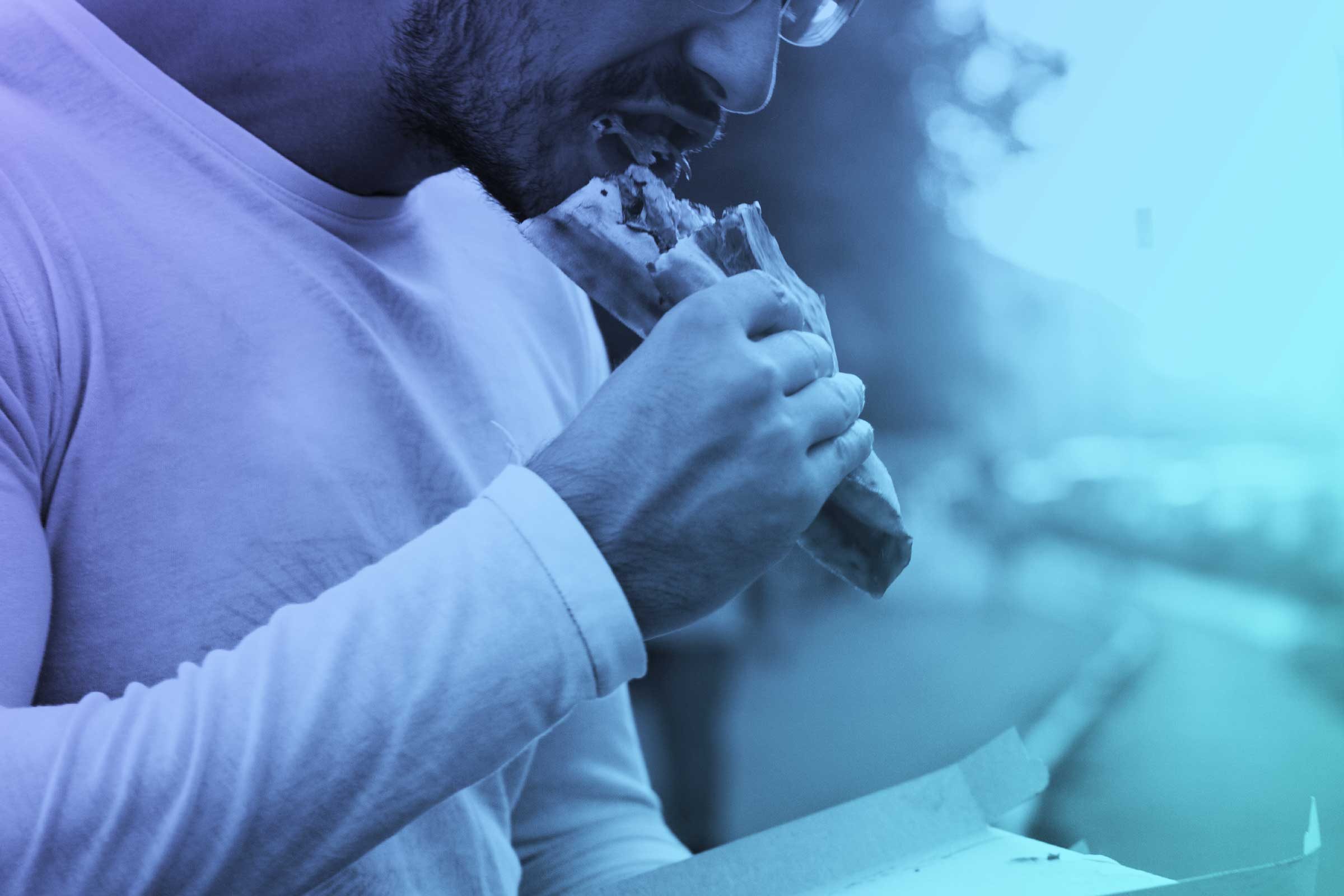 Some eaters jump up and down … while they eat

Eaters usually compete standing up so that their stomachs are not compressed and are able to hold the maximum amount. And as they eat, Chestnut and other competitive eaters periodically pogo up and down to help move the food down and prevent blockages or choking. 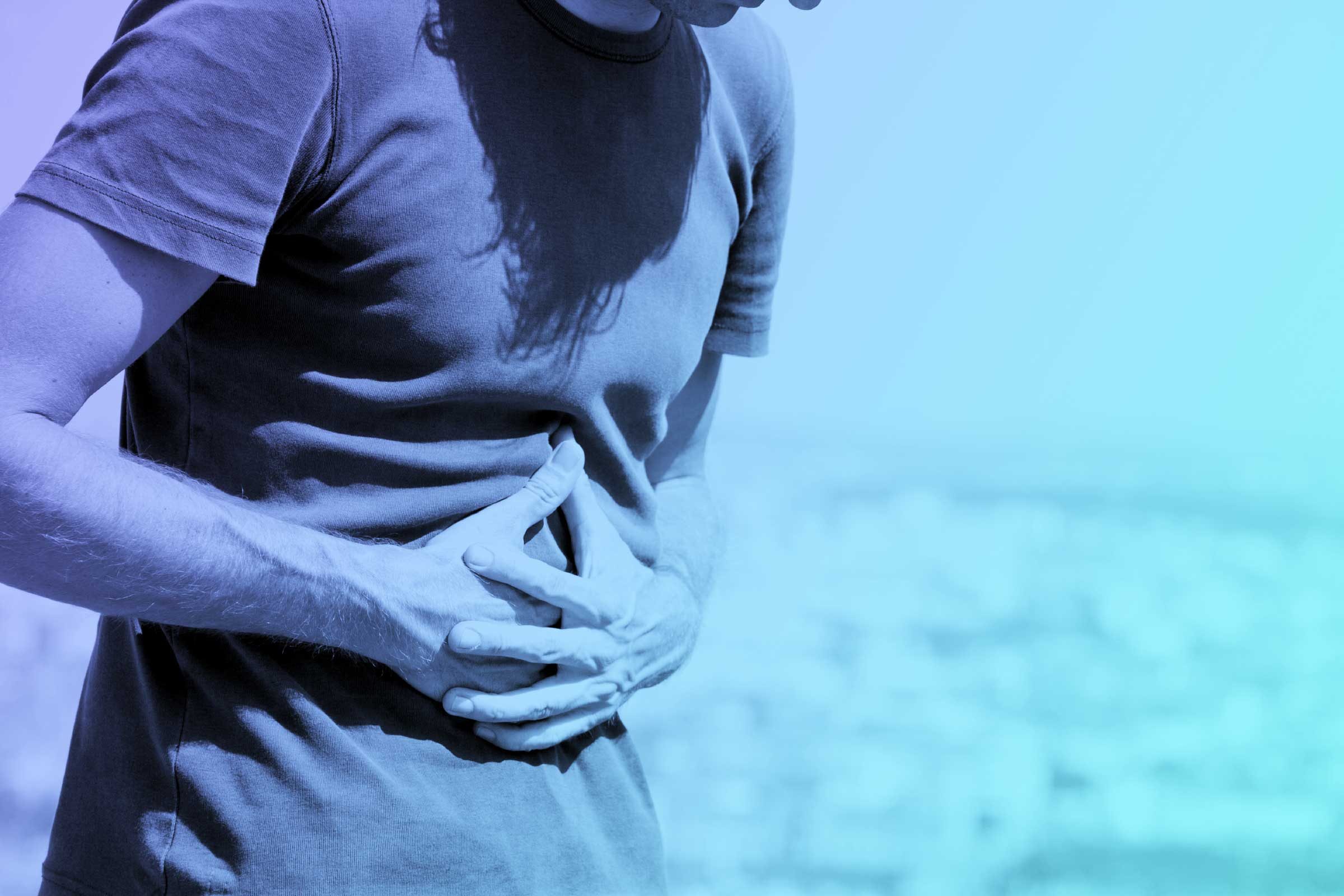 Puking does occur, although it has a much classier name

In the competitive eating world, vomiting is referred to as a “reversal” or a “Roman incident,” and buckets are thoughtfully stationed around the competitors. However, a reversal or Roman incident will get an eater immediately disqualified, but only if the food exits the eater's mouth. If an eater is able to swallow it, they're still in the running. More than you wanted to know. However, eaters are not penalized if they hurl after they leave the contests. Note: The top pro eaters all strenuously deny ever throwing up after competitions, but c'mon? Really? 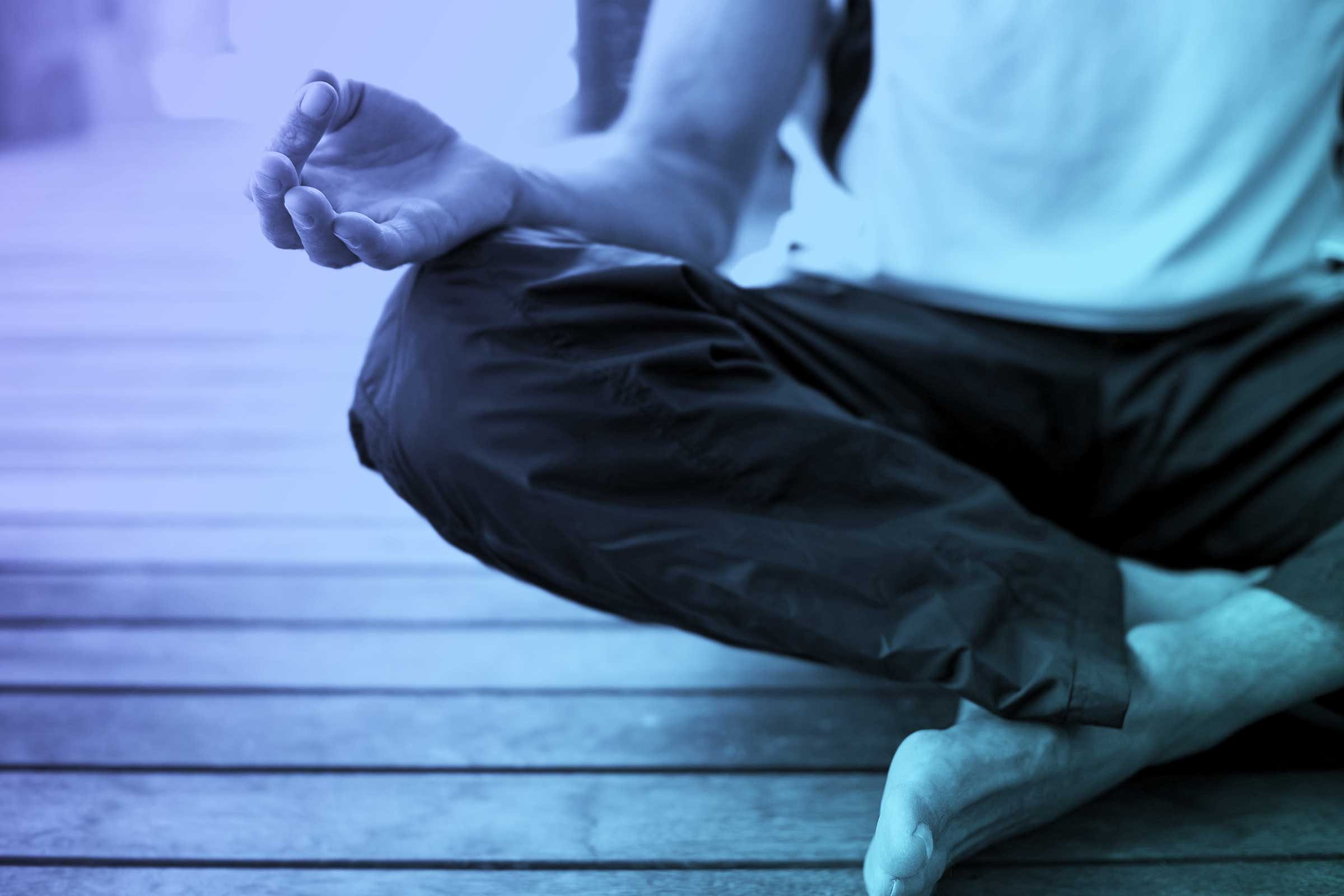 Eaters need to soldier on through incredible pain and discomfort

Champions must keep a laser-sharp focus on the contest. “[Eaters] have to find a rhythm,” Chestnut said in an interview on readfrontier.com, when asked to share his secrets. “Do the same thing over and over again. No matter what the body is telling them they have to ignore all those feelings. … Your body is going to cramp, your body is going to tell you to slow down because you are eating in front of people.” Some competitive eaters practice meditation or undergo hypnosis to improve their concentration and build their mental stamina. Here are some common reasons you might have an upset stomach. 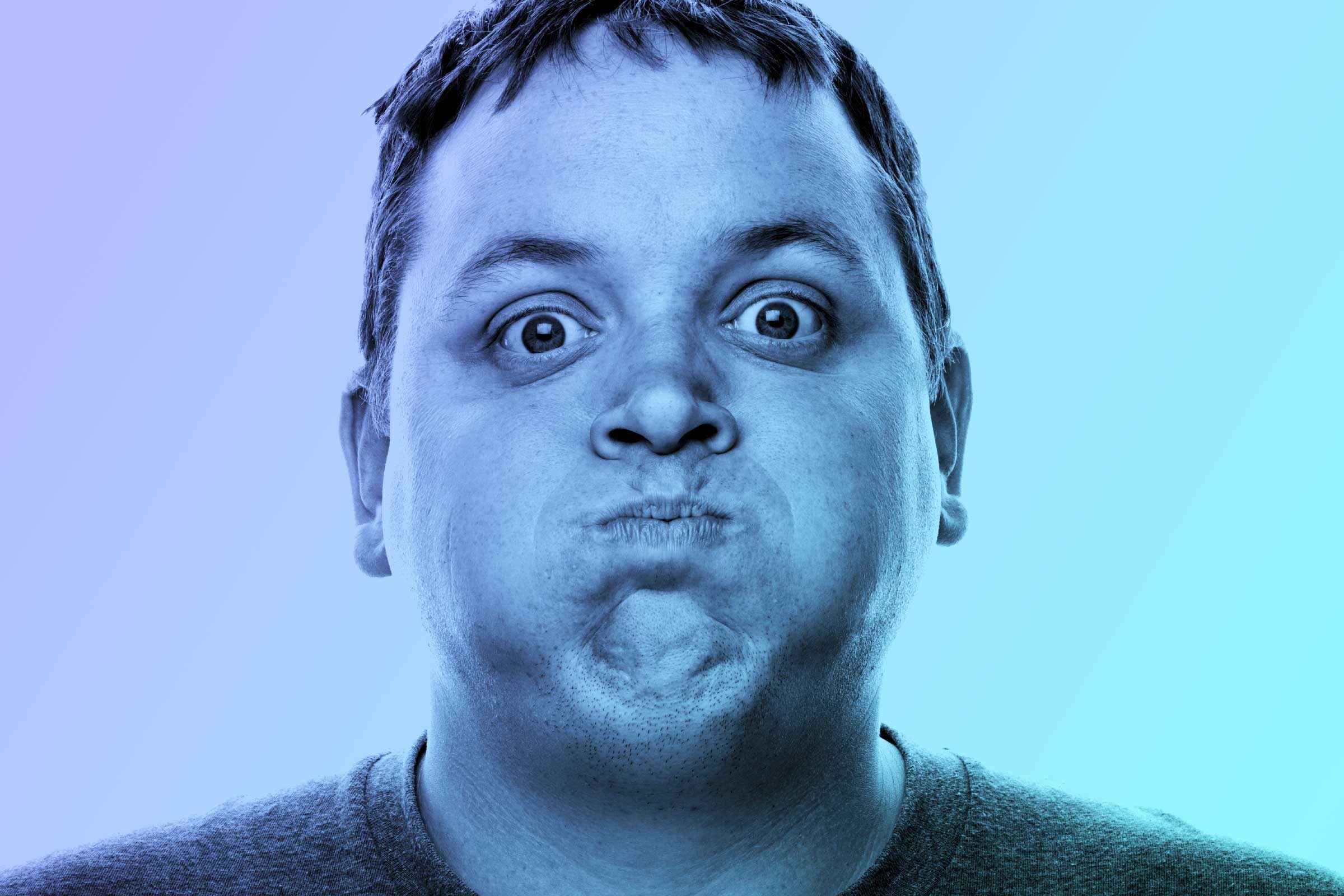 Serious competitors know that when time is called, they’re allowed to have food in their cheeks and it counts toward their total as long as they swallow it within 30 seconds. So when the whistle blows, don’t be surprised if participants look like Alvin and company. 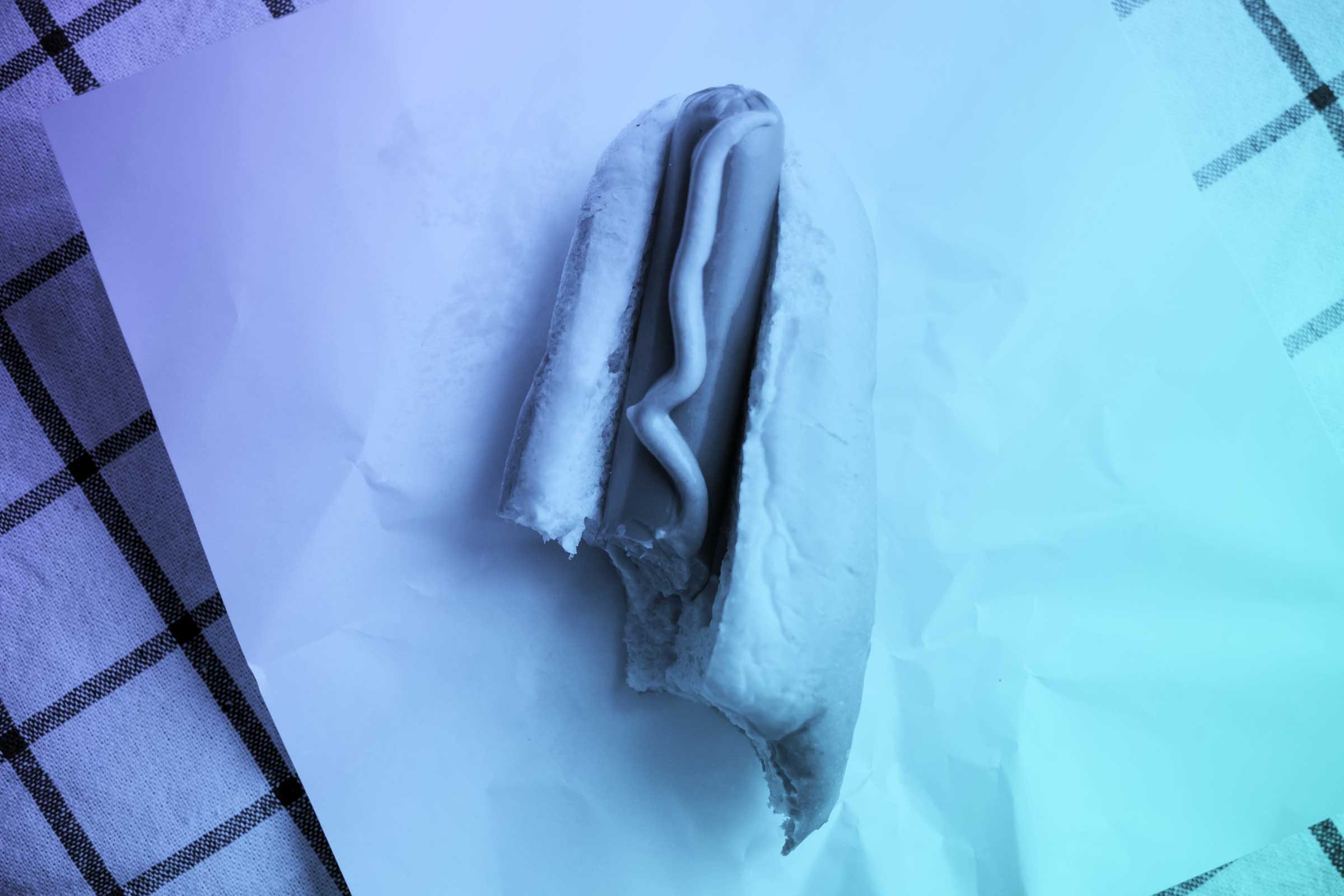 Competitive eating is a hot-dog-eat-hot-dog world

Some competitive eaters resort to dirty tricks. As reported in a GQ story, some unscrupulous participants practice “happy feet”—dropping food on the floor and mashing it so no one sees it. One competitor said that at some contests, his wife would sit in the audience and signal him if she saw others doing the happy feet dance so that he could follow suit. If they're not completely ruined for you, here are some tasty new ways to eat hot dogs. 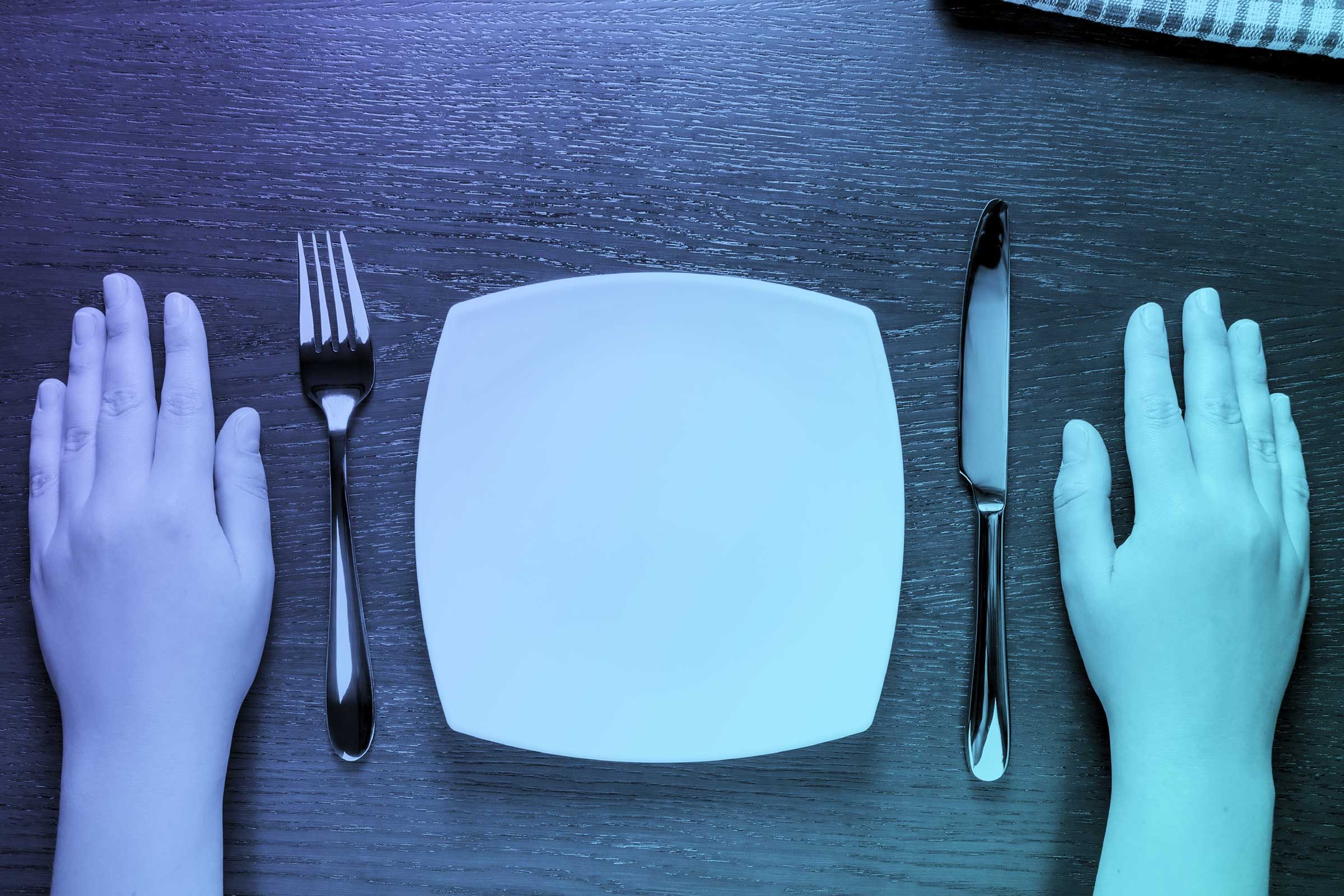 Competitive eating is feast or famine

Many eaters starve themselves before contests to have the greatest stomach capacity (and appetite). Chestnut fasts for two to three days before Nathan’s, consuming a measly 500 calories a day to keep himself going. Luckily, you don't have to go to such extremes if you want to binge-eat on Thanksgiving—here's what you should do. (If your appetite's not gone, of course.)