Golden Girl Betty White is celebrating her 98th birthday in January 2020—and she looks as good and lively as ever! Celebrate with these fun and sweet photos of her throughout her illustrious career. 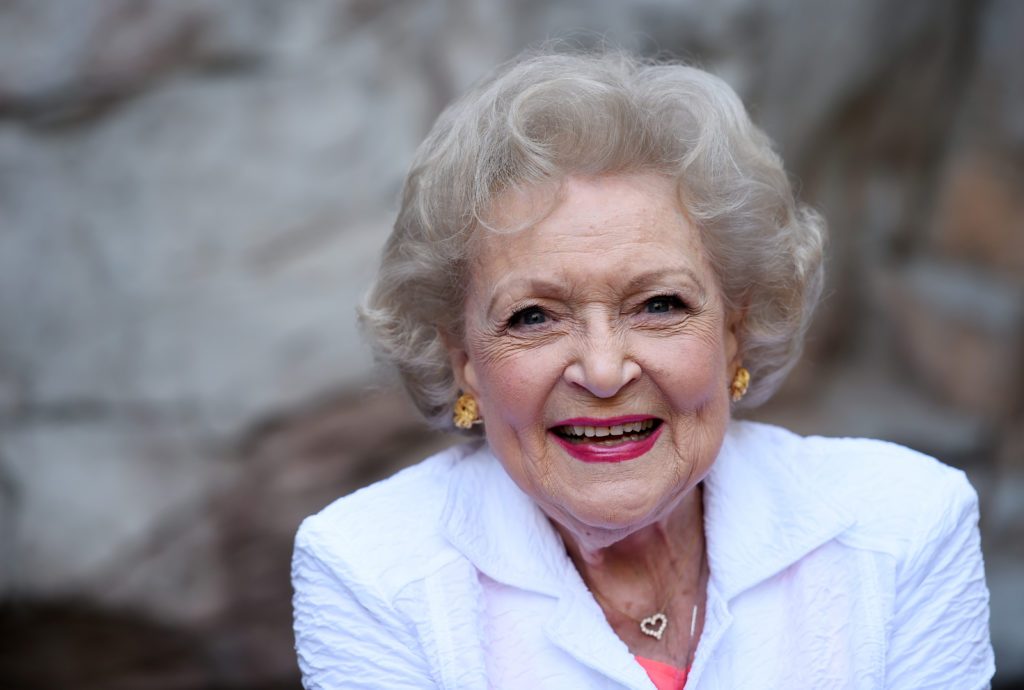 Betty Marion White was born on January 17, 1922, in Illinois, and it didn’t take her long to start making waves in the entertainment industry. Even before she gained television stardom, she appeared on several different radio shows throughout the 1940s—including her own, The Betty White Show. Her career would soar through several more decades, and as it enters another one, she’s become revered as a larger-than-life cultural icon. In addition to this gorgeous shot, taken at a Los Angeles Zoo gala in 2015 when White was 93, here are some of our favorite photos of her through the years. 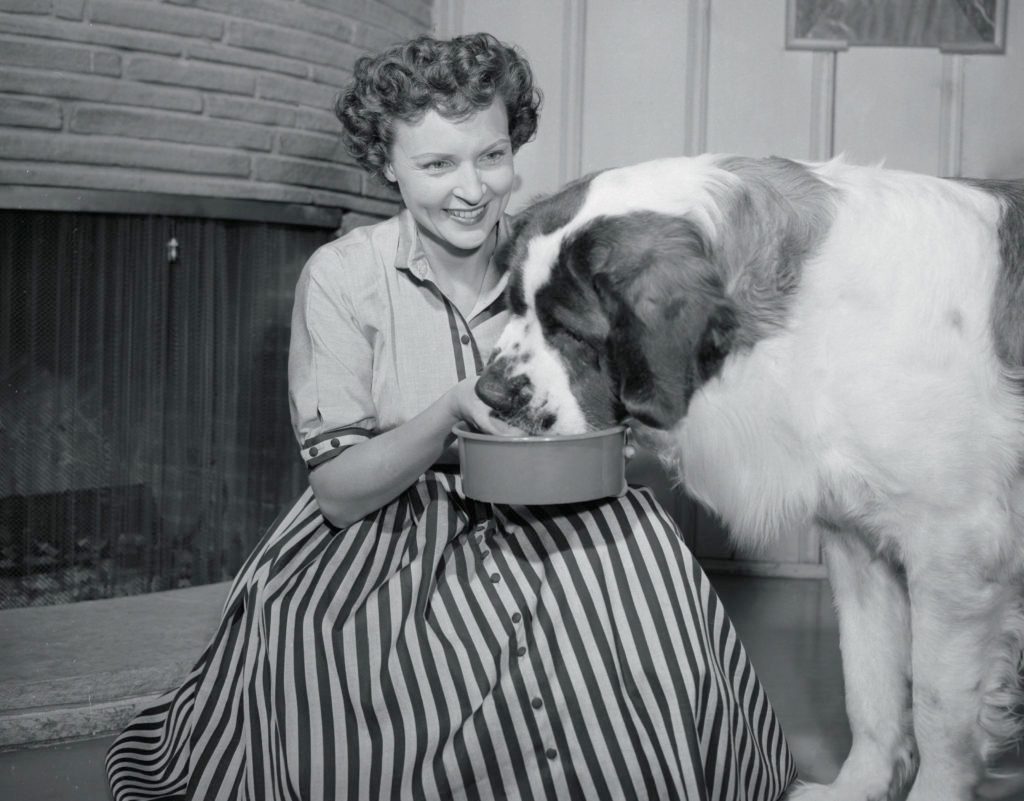 Just when you thought Betty White couldn’t get any more delightful, turns out she’s a big-time dog person! Betty White, age 32, was starring in—and, breaking the norms at the time, producing—Life with Elizabeth when this 1954 photo was taken. Here, she feeds her massive St. Bernard, Stormy, one of several dogs she’s owned throughout her life. Here are some more precious vintage photos of dogs being our best friends. 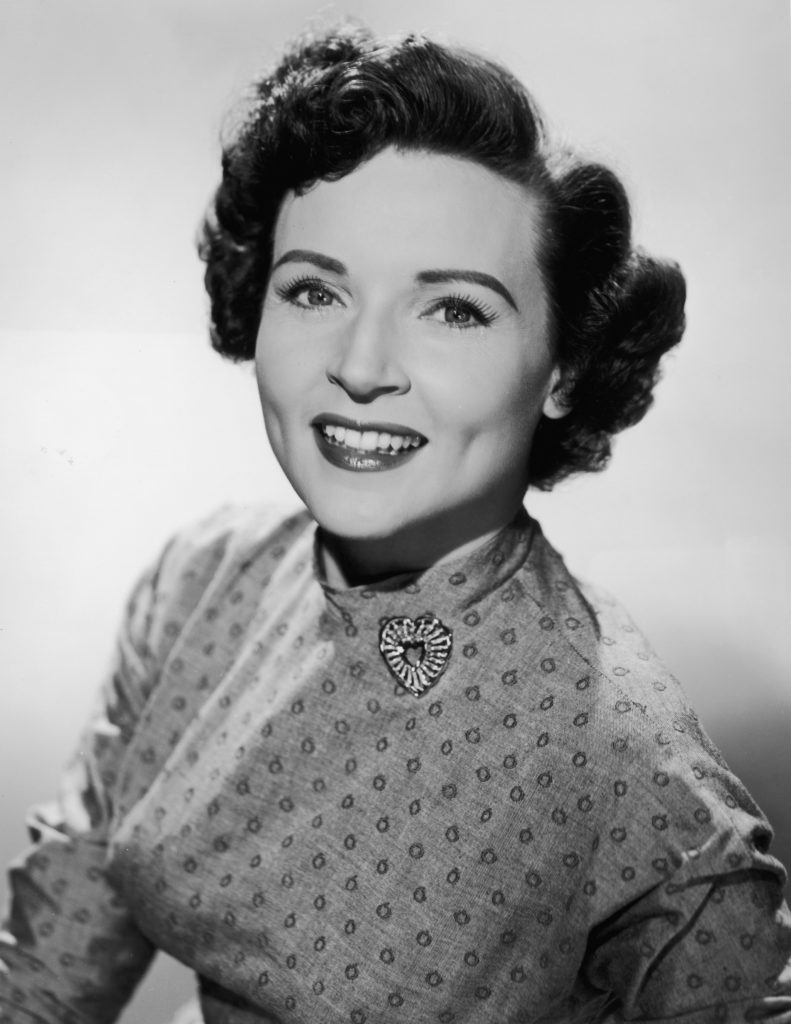 White is quintessential ’50s charming elegance in this studio headshot from 1955. Check out some more glamorous vintage photos of life in the 1950s. 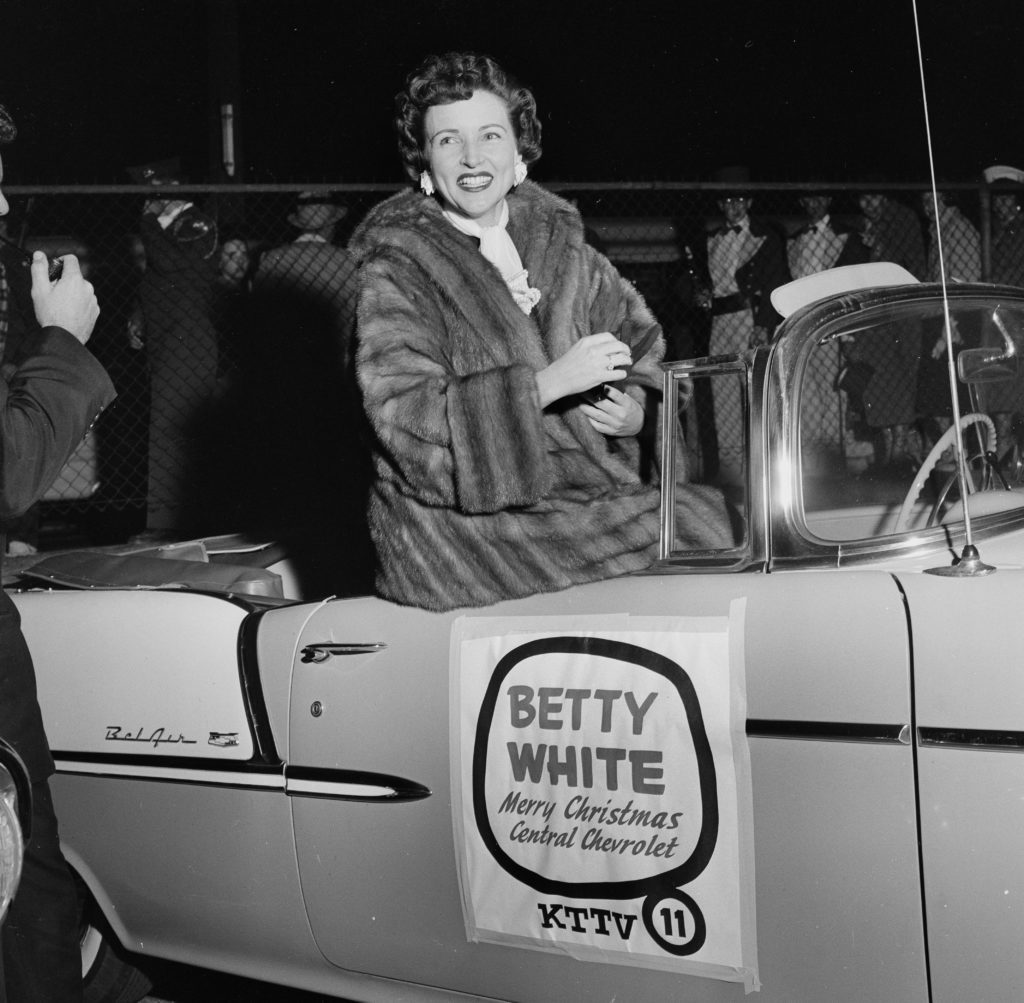 Betty White, age 33, could be a pageant queen in this 1955 photo. She perches atop a Chevrolet decorated with her name, smiling at spectators of a Los Angeles Christmas parade. Can’t get enough old-timey automobile photos? Here are some classic car ads that will take you back in time. 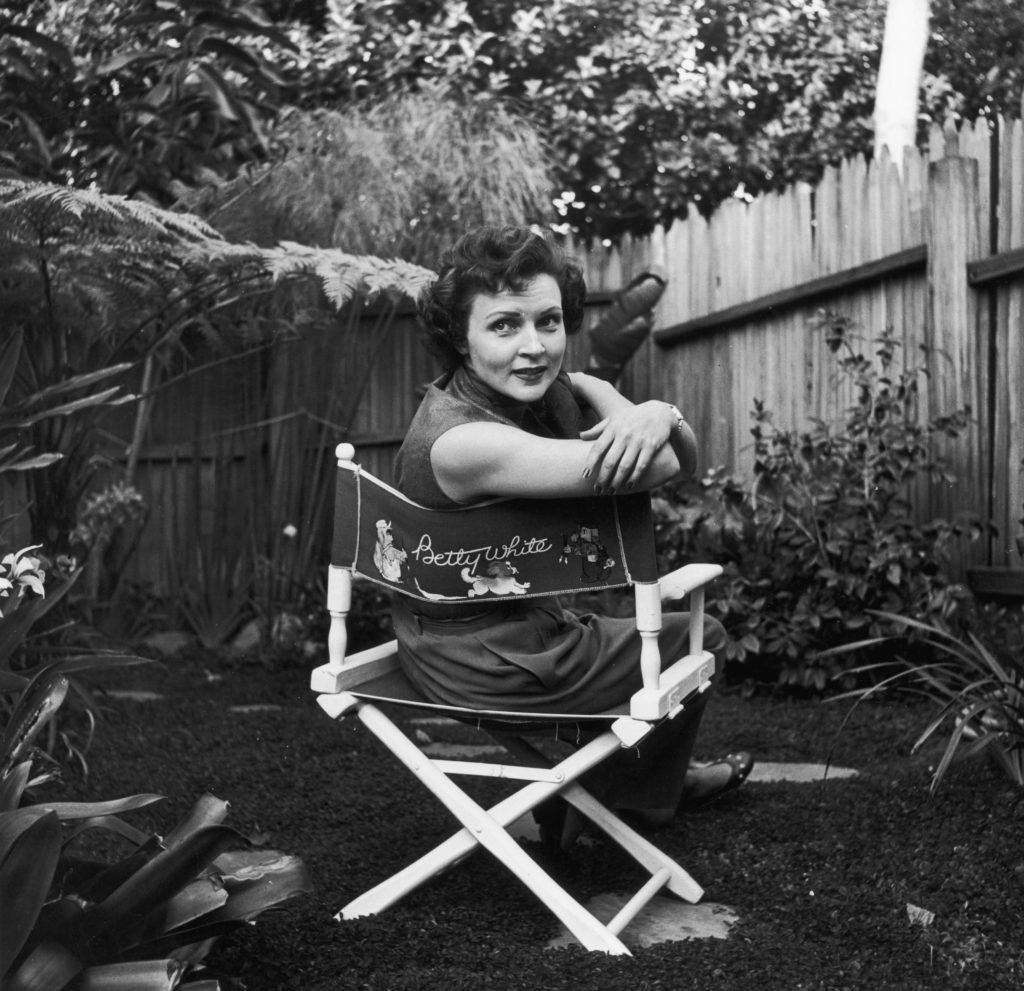 Betty White, age 34, strikes this glamorous pose in a personalized chair. By the time this photo was taken (in 1956), she’d already been a producer on her sitcom Life with Elizabeth, as well as a talk show called The Betty White Show (a television version of her 1940s radio show). She’d also helped found the production company Bandy Productions in 1952—pretty groundbreaking for the male-dominated 1950s entertainment industry! She totally deserves commendation right along with these other women pioneers who changed the world. 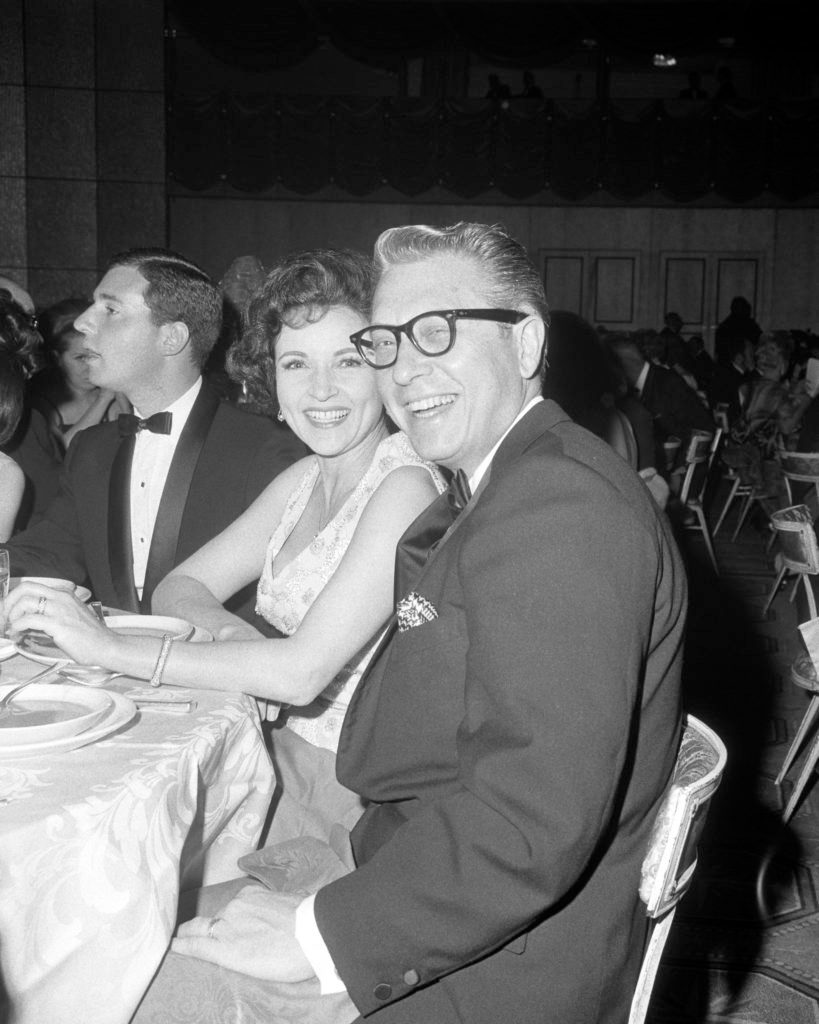 White is all smiles at the 1966 Emmy Awards. She shares a table with her first husband, Allen Ludden, the host of the game show Password. She met him while appearing as a celebrity guest on the show, and they married in 1963 when she was age 41. Sadly, Ludden would pass away in 1981. 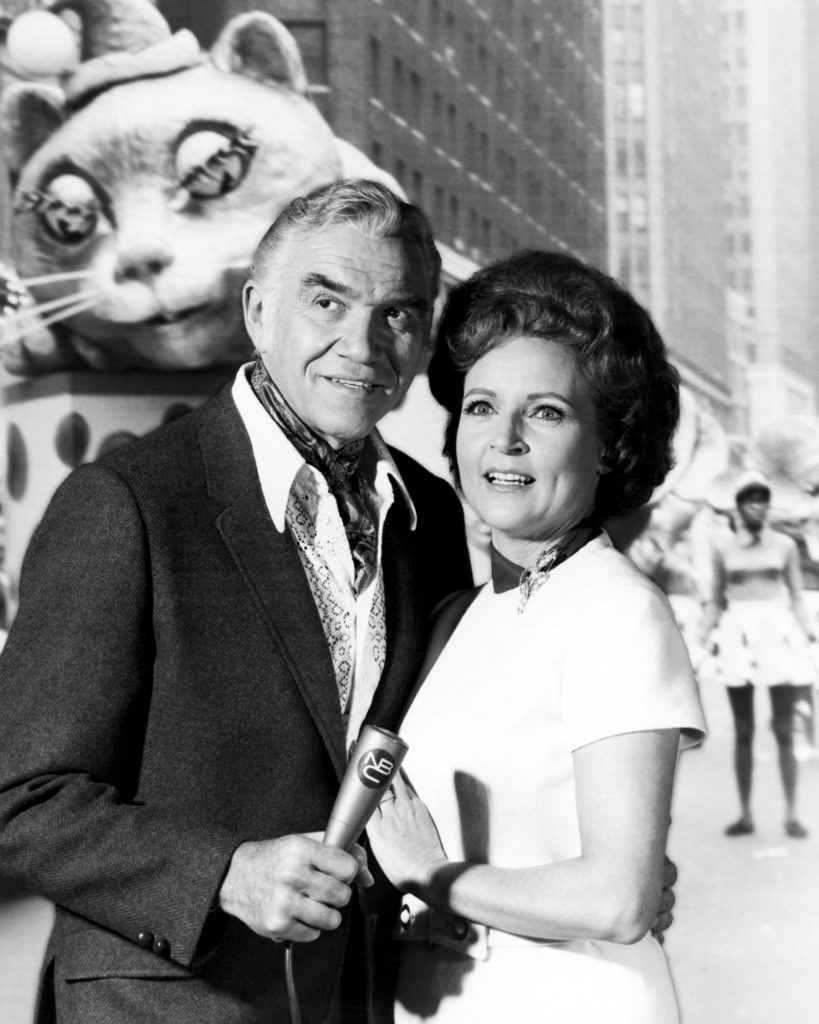 White prepares to host the 1969 Macy’s Thanksgiving Day Parade, with her co-host, actor Lorne Greene, in this pre-broadcast promotional photo. Super-creepy cat balloon behind them notwithstanding, this photo is a charming slice of Americana. Here are some more vintage photos from the Macy’s Parade. 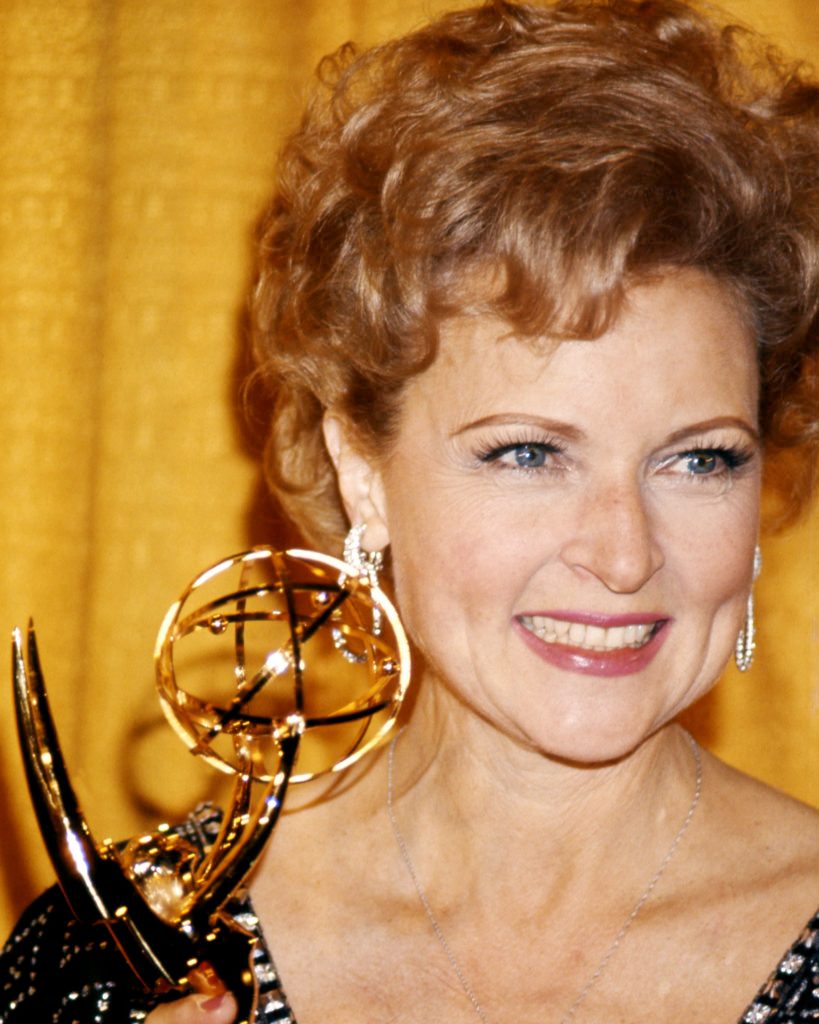 And the Emmy goes to…

Betty White, age 53, poses triumphantly with her brand-new Emmy Award at the 1975 ceremony. She’d been nominated for the award before, in 1951, but this was her first win. She won for her recurring guest stint on The Mary Tyler Moore Show. Learn some fun facts even TV buffs might not know about the Emmy Awards. 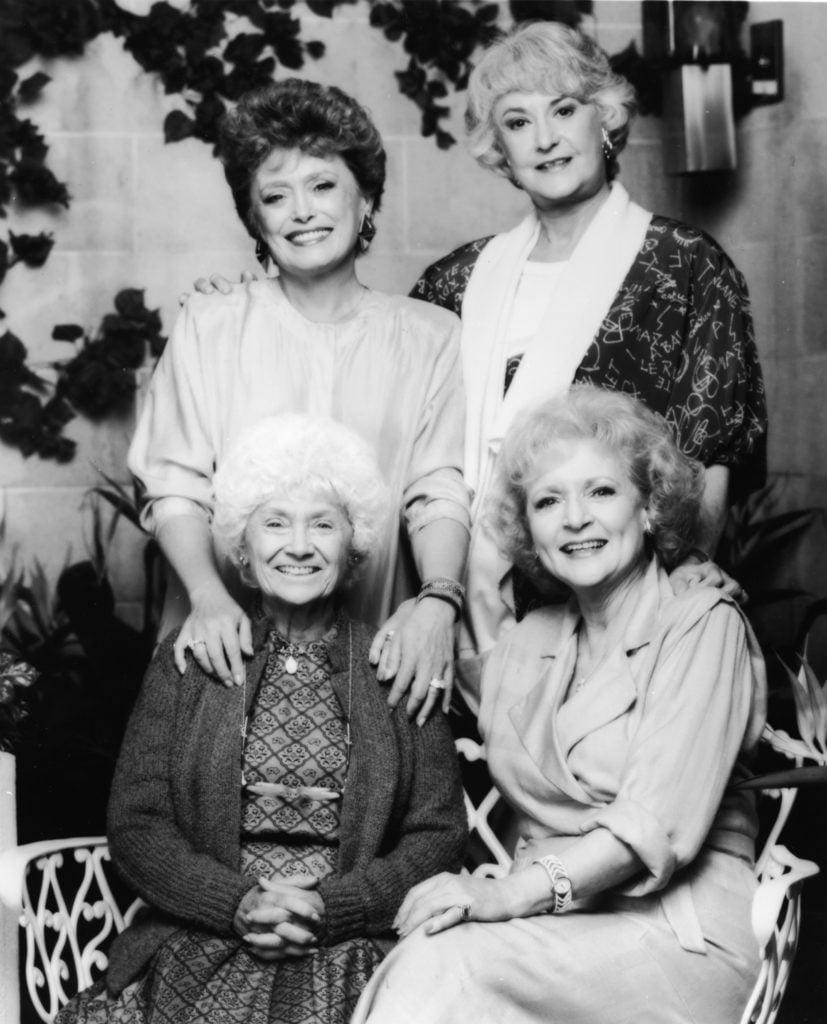 The gang’s all here

Betty White’s most famous role of her entire career might still be Rose Nyland from The Golden Girls, the classic sitcom celebrating female friendship that ran from 1985 to 1992. Here, White along with her cast-mates Rue McClanahan, Bea Arthur, and Estelle Getty, pose for a promotional photo for the show. See which iconic line from Golden Girls made our list of best unforgettable TV and movie quotes. 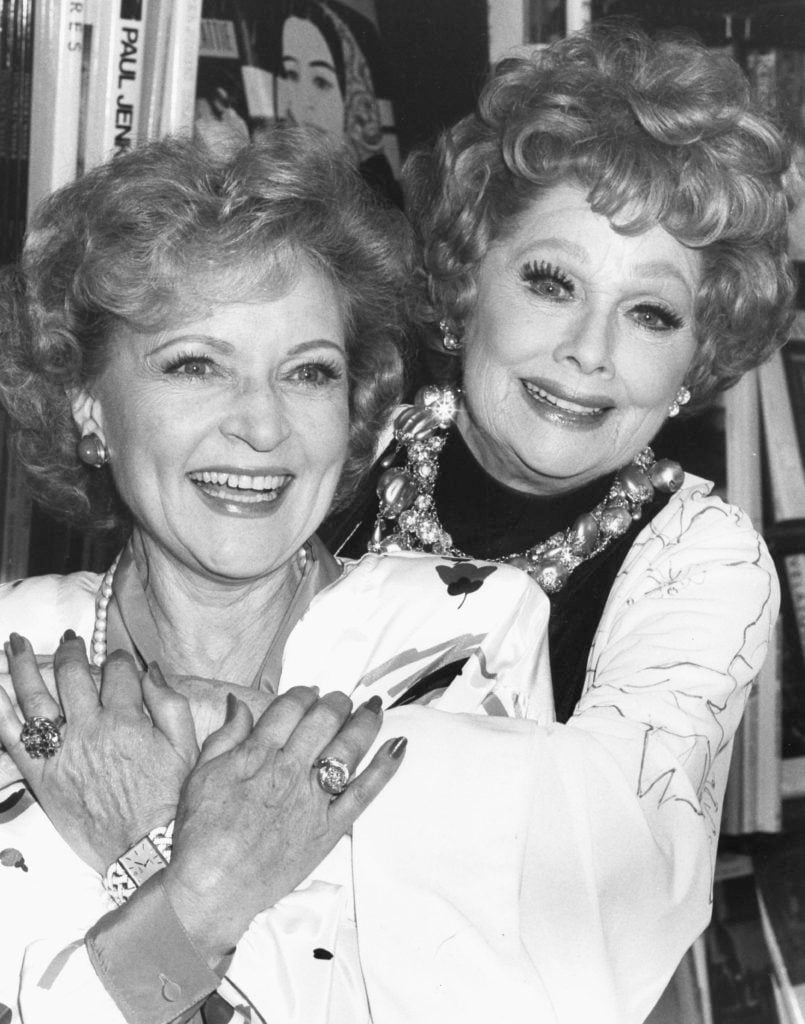 A pair of pioneers

Name a more iconic duo! At a book signing in 1987, White is all smiles with another 1950s household-name, I Love Lucy‘s Lucille Ball. White and Ball certainly look great for ages 65 and 76, respectively! 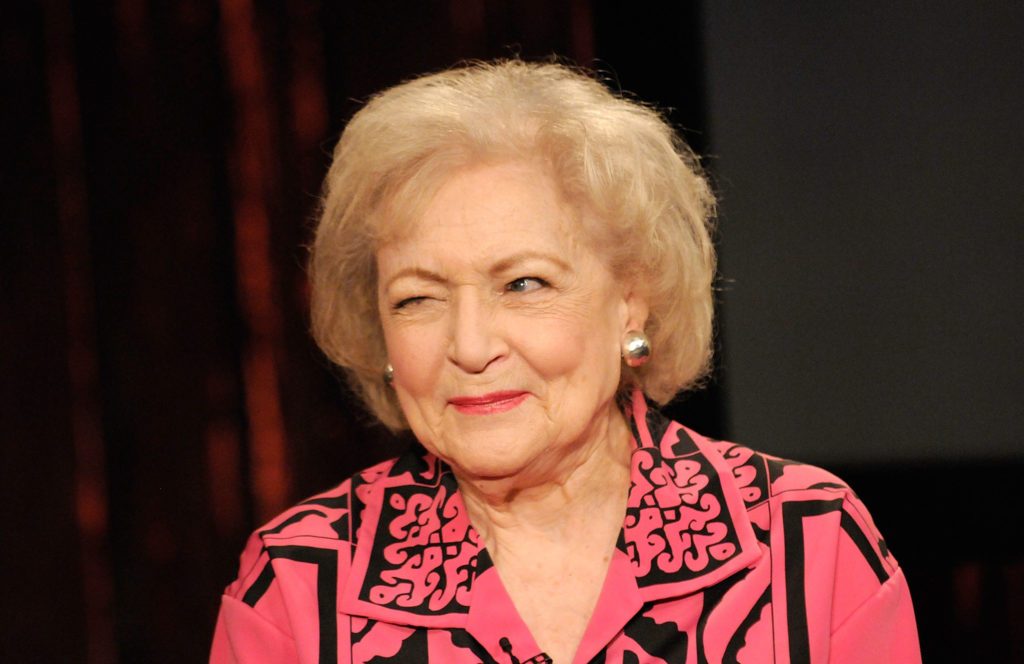 Following Betty White into the 21st century, this 2009 shot captures her continued spunk as an octogenarian. At age 87, she attends an event at New York City’s Fuse Studios, rocking this bold pink-and-black patterned blouse. 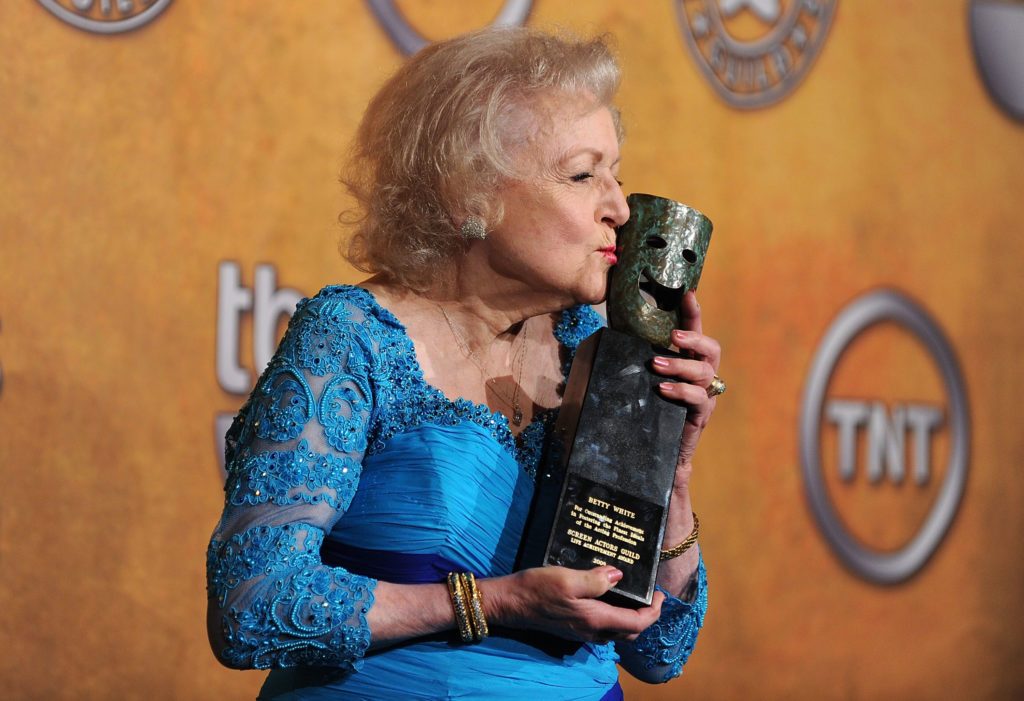 Only a few days after her 88th birthday, White gets cozy with this delightfully over-the-top tiki statuette, which was bestowed upon her with the Lifetime Achievement Award at the 16th Screen Actors Guild Awards. Of course, a full decade after that, her achievements only continue. 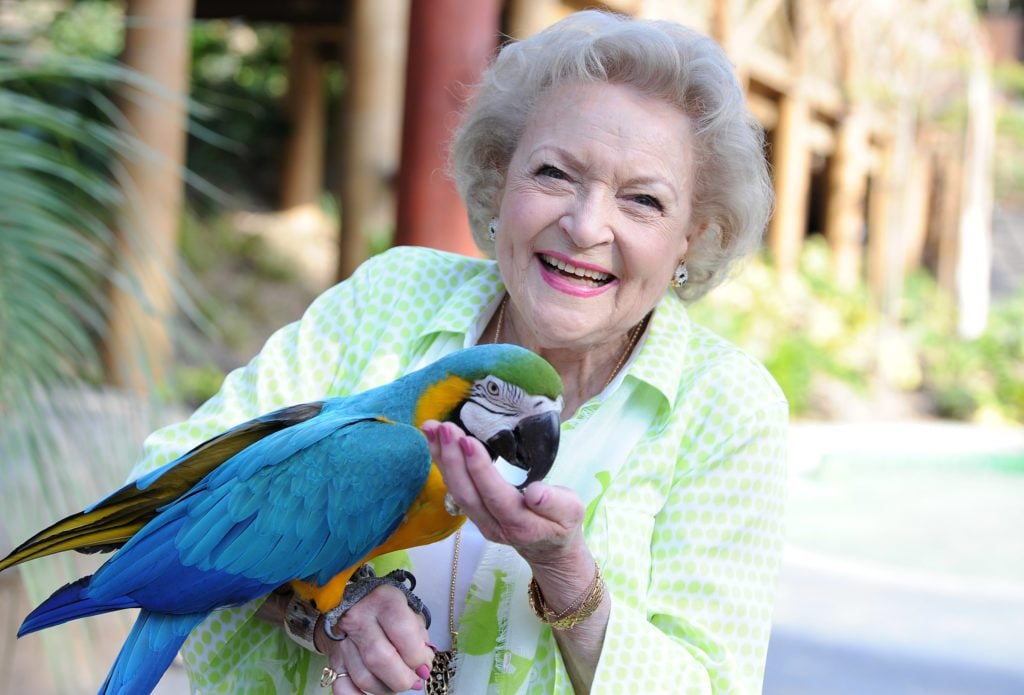 A 92-year-old White delightedly makes friends with this majestic parrot at the Los Angeles Zoo in June 2014. 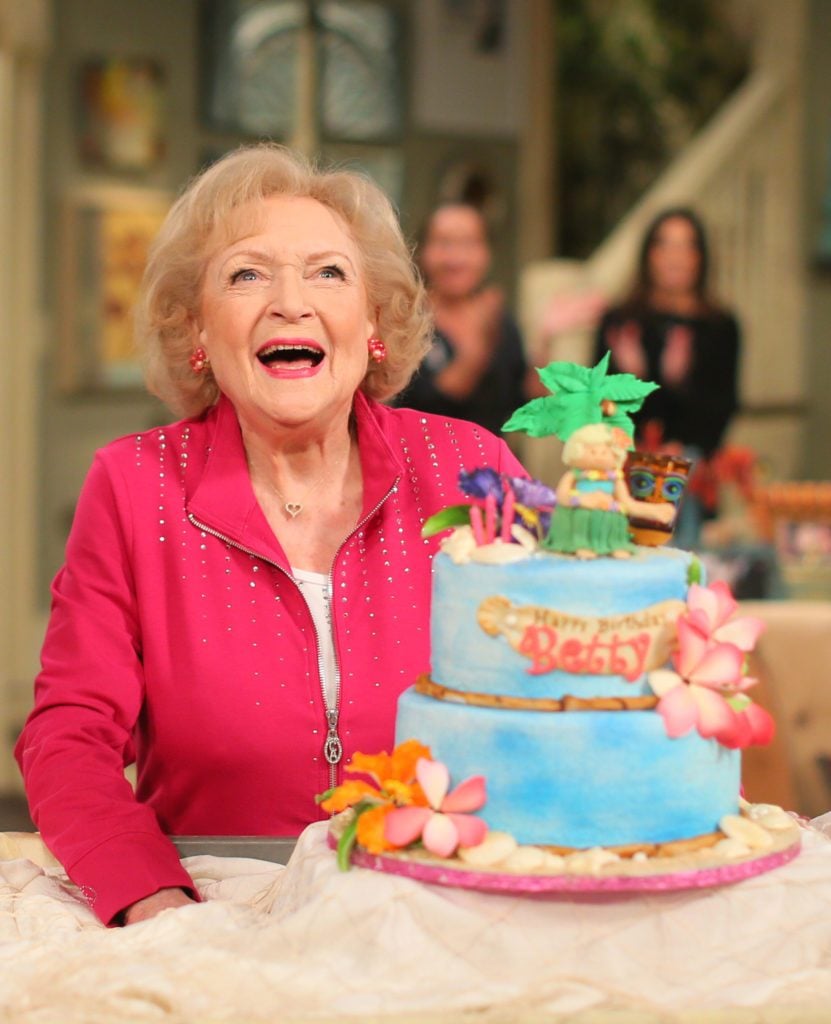 Have your cake and eat it

May we all have this much enthusiasm when presented with the cake on our 93rd birthdays! That’s right, Betty White is age 93—and still slaying in hot pink—as she prepares to dig into this fancy luau cake on the set of Hot in Cleveland in 2015. Here are some of our favorite zingers that her character from that sitcom, Elka Ostrovsky, said throughout the TV Land show’s run. 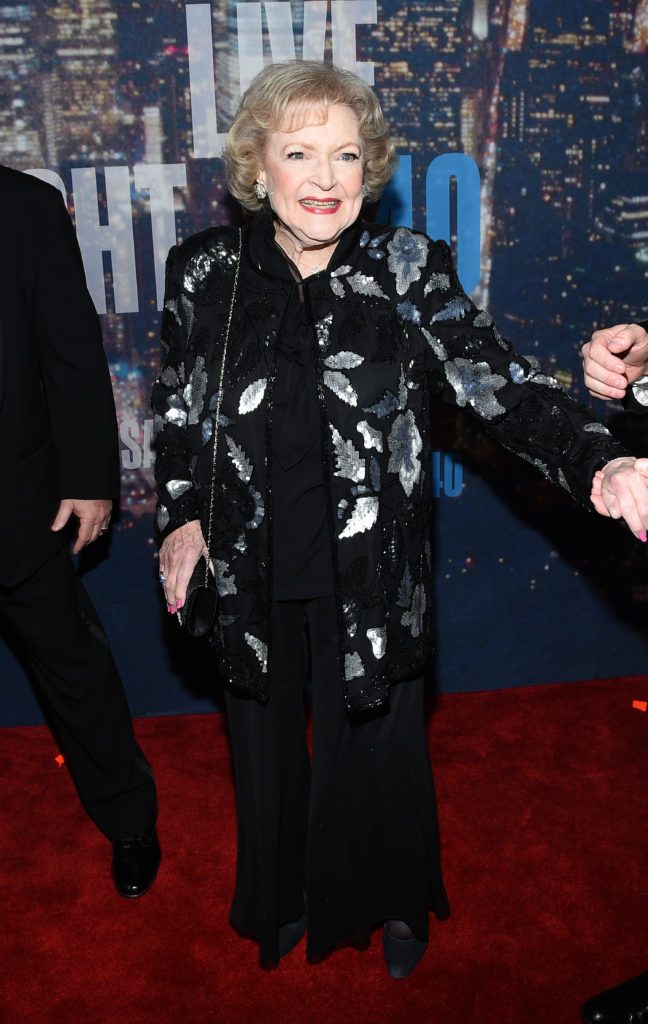 Shortly after celebrating her 93rd birthday in 2015, White attends another celebration—the 40th anniversary of Saturday Night Live, on February 15 of the same year. Five years prior, in May 2010, White had hosted SNL—making her the oldest-ever host, by a full eight years, at 88—and scored her seventh Emmy Award for the stint. Next, check out some more must-see photos of some well-known celebs throughout the 20th century.