14 Common Pairs of Words That Everyone Confuses

Next time you're pondering whether to use "who's" or "whose," we've got you covered. 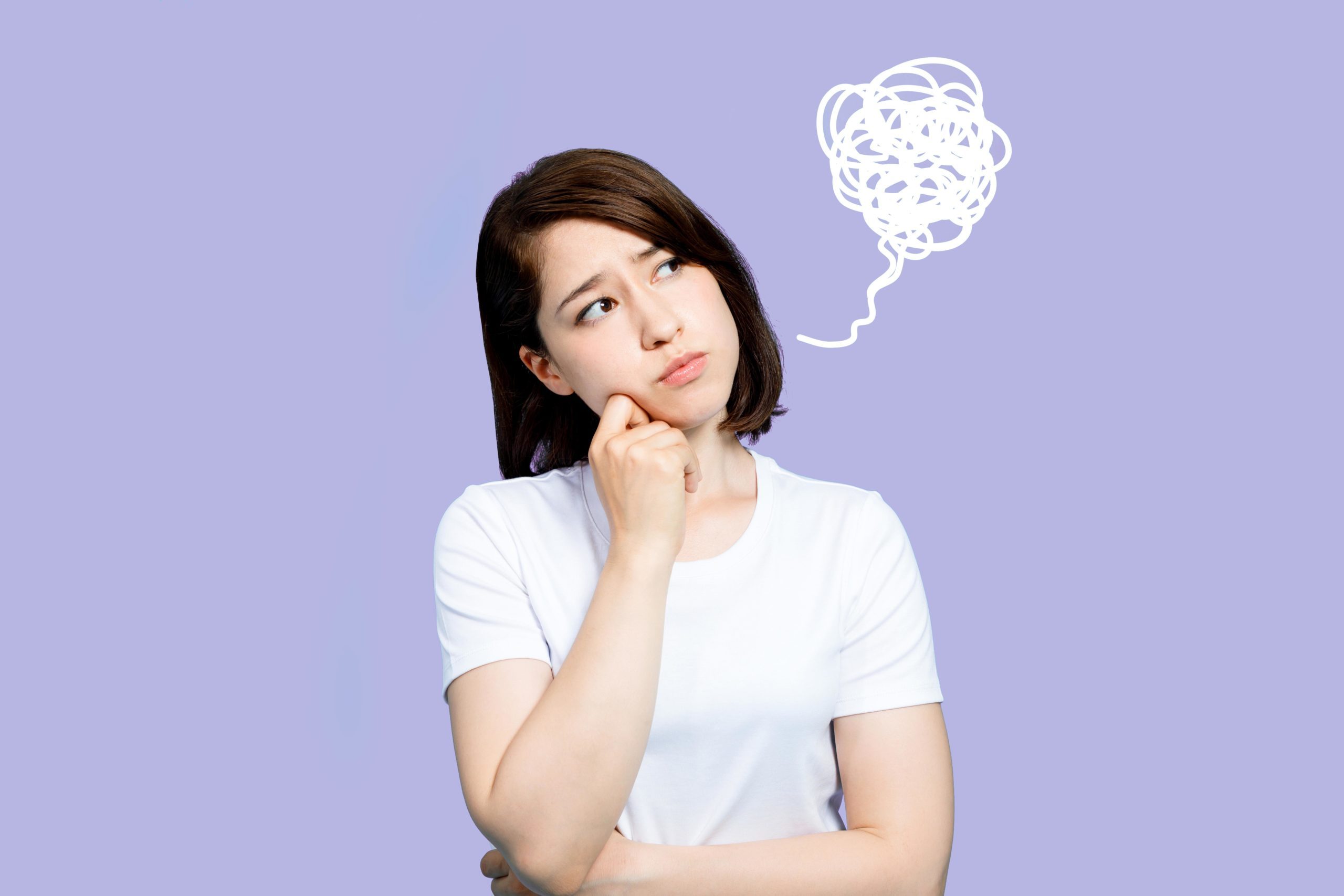 For better or worse, the English language has a lot of words that sound the same. When words sound exactly the same but are spelled differently and have different meanings, like “your” and “you’re,” they’re called homophones. But there are also plenty of pairs of words that don’t sound exactly the same, but sound pretty darn similar. And they’re just as easy to confuse. Some, like “inhibit” and “inhabit,” are words that we don’t use very often in our everyday lives. But some are! For instance, have you mixed up “loose” and “lose,” or at least took a second to ponder which to use? These pairs of words can be frustrating and tricky to keep straight no matter how much you use them. Here’s the difference between “affect” and “effect,” “further” and “farther,” and more pairs of similar words. 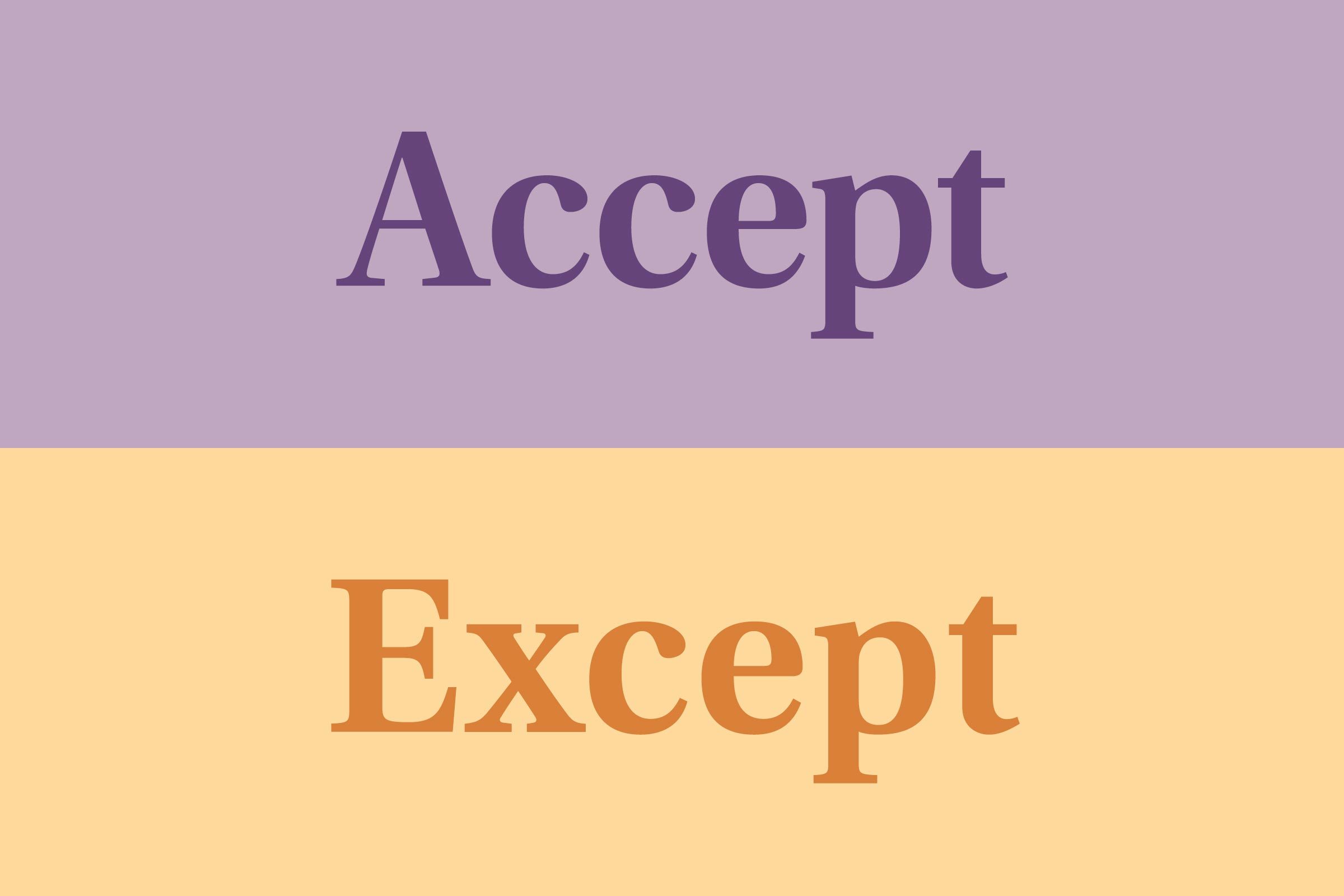 Here’s another perplexing one. Despite sounding the same, “accept” and “except” mean very different things, often leaving people wondering which is which. Well, wonder no more! “Accept” is a verb that means “to receive with approval or favor.” You “accept” a gift, and you also “accept” someone for who they are. “Except,” meanwhile, is most often a preposition, and it means “with the exclusion of.” You would say “I like all of these pizza toppings except anchovies.” There is a verb form of “except,” but it’s not very common. It means, unsurprisingly, “to exclude or leave out.” 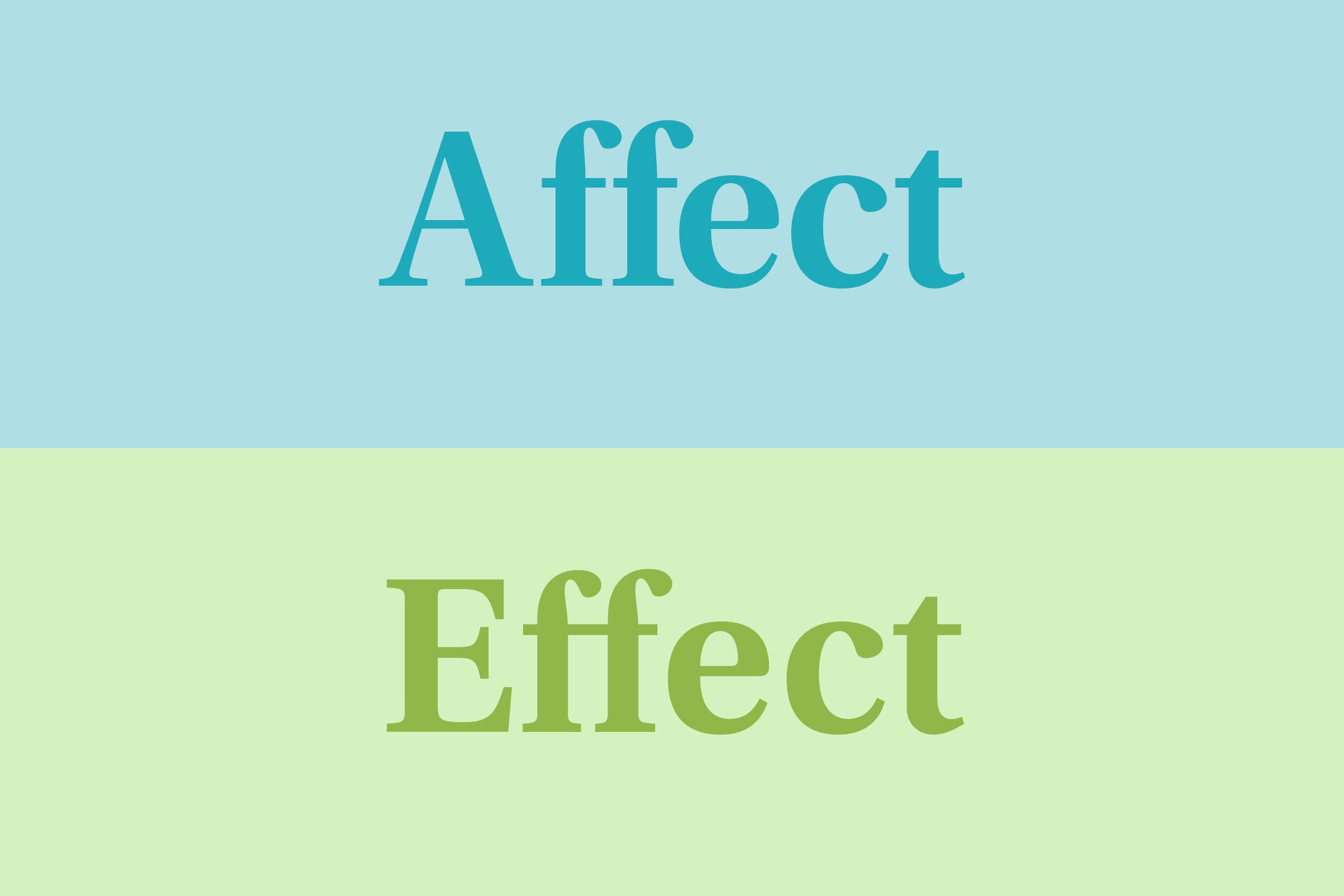 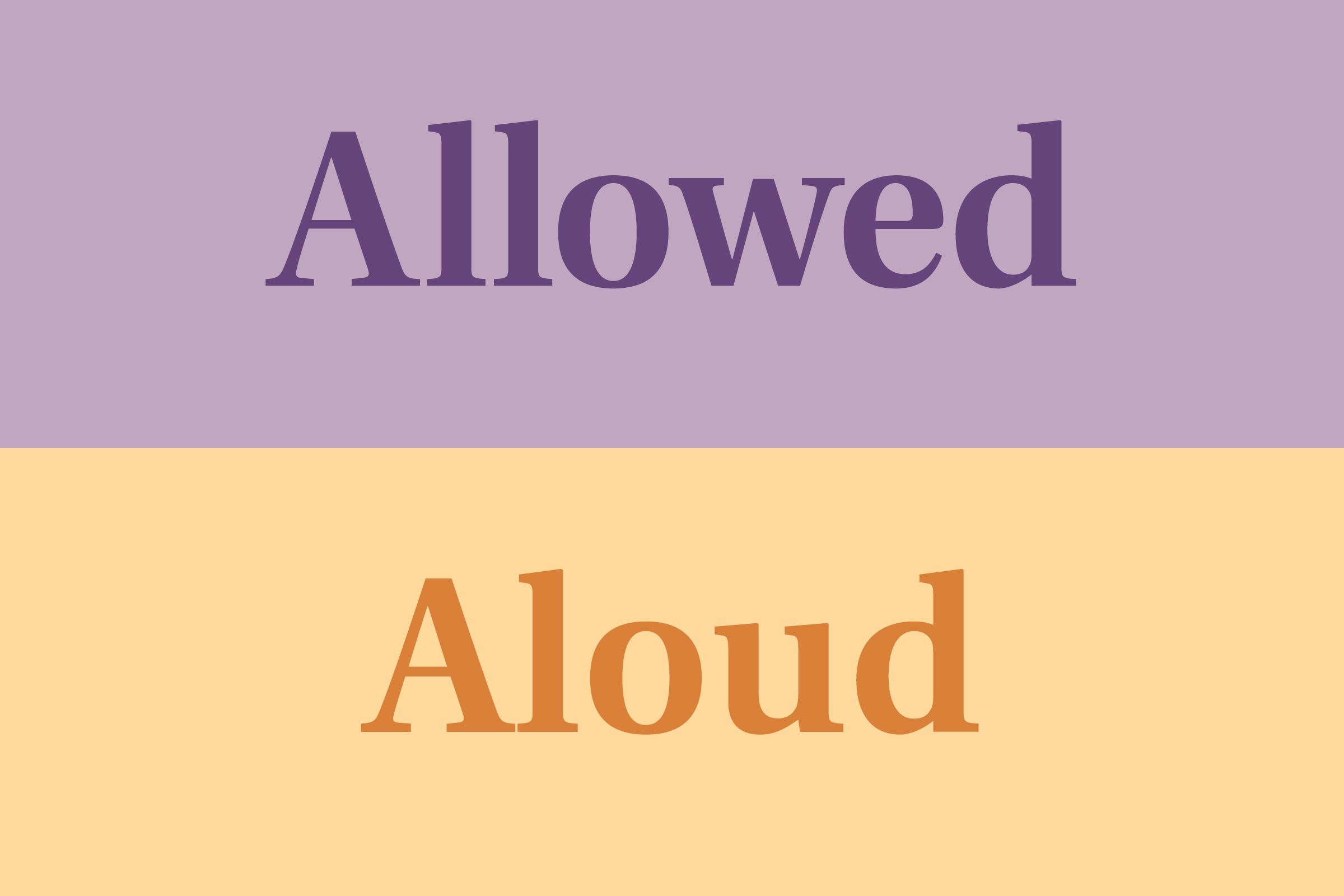 Here are some more pesky homophones that you might get mixed up. “Allowed” is the past-tense form of “allow,” hence the “-ed” at the end. It means “permitted to do something.” So if your parents won’t let you have candy before dinner, you’d say “I’m not allowed to have candy.” “Aloud,” meanwhile, is not a form of a verb; it’s an adverb and means the same thing as “out loud.” “I try to do funny voices when I read aloud to my daughter” is a correct use of “aloud.” Learn about more similar-sounding words that are easy to mix up. 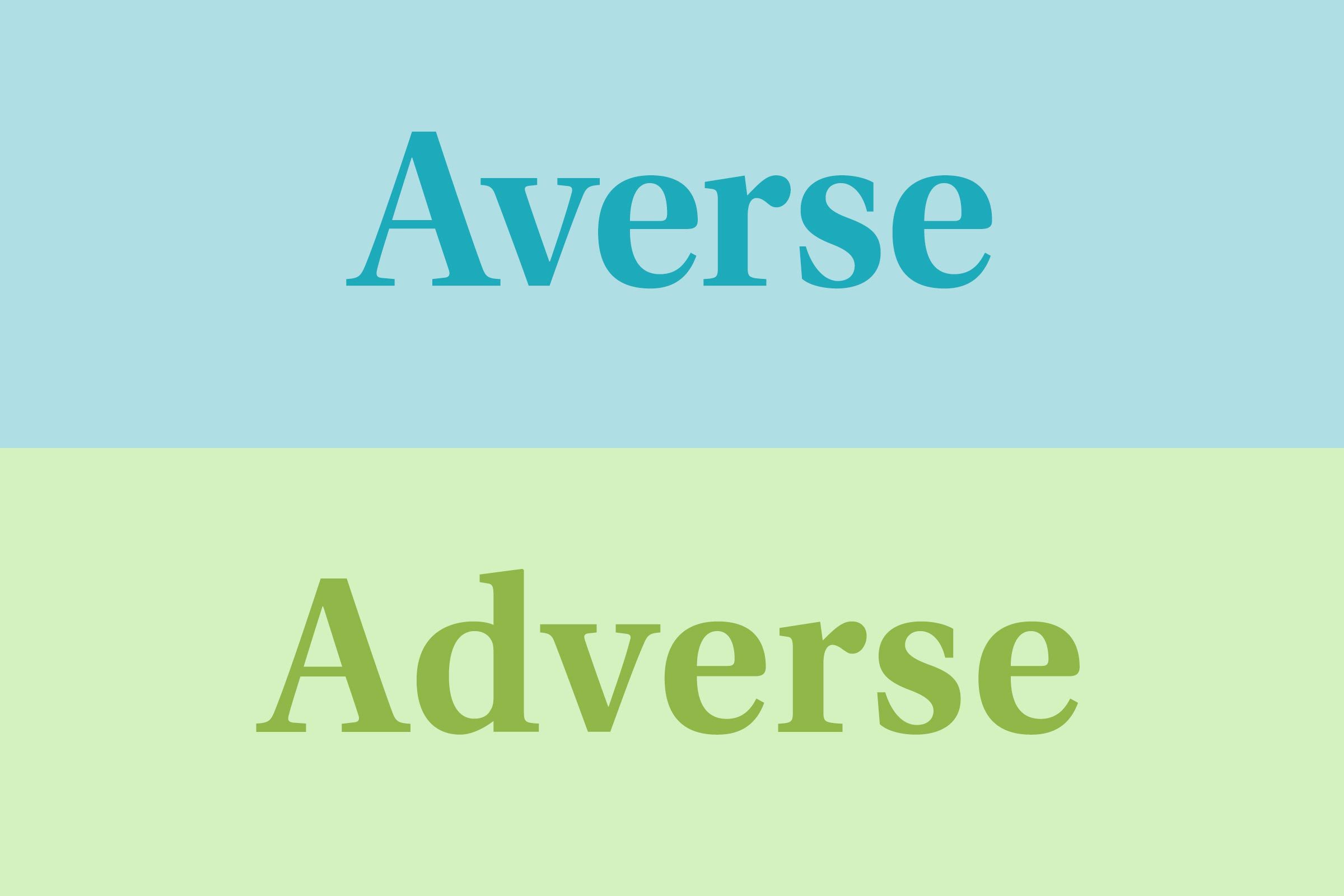 This is another challenging one, made all the more difficult by these words’ similar meanings. They both have to do with strong negativity. They’re both adjectives, too, complicating things further. “Adverse” means “unfavorable or harmful.” For instance, you could say “The town is still suffering from the adverse effects of the hurricane.” But it can also have milder uses, as in, “She received a lot of adverse criticism on her novel.” “Averse,” meanwhile, means “strongly opposed to.” So it’s kind of negativity directed in the opposite direction from “adverse.” So you could say “People seem frustratingly averse to wearing masks during a pandemic, even though there’s evidence that it keeps people safe.” A phrase you might hear a lot is “risk-averse,” which means “taking care to avoid risk.” 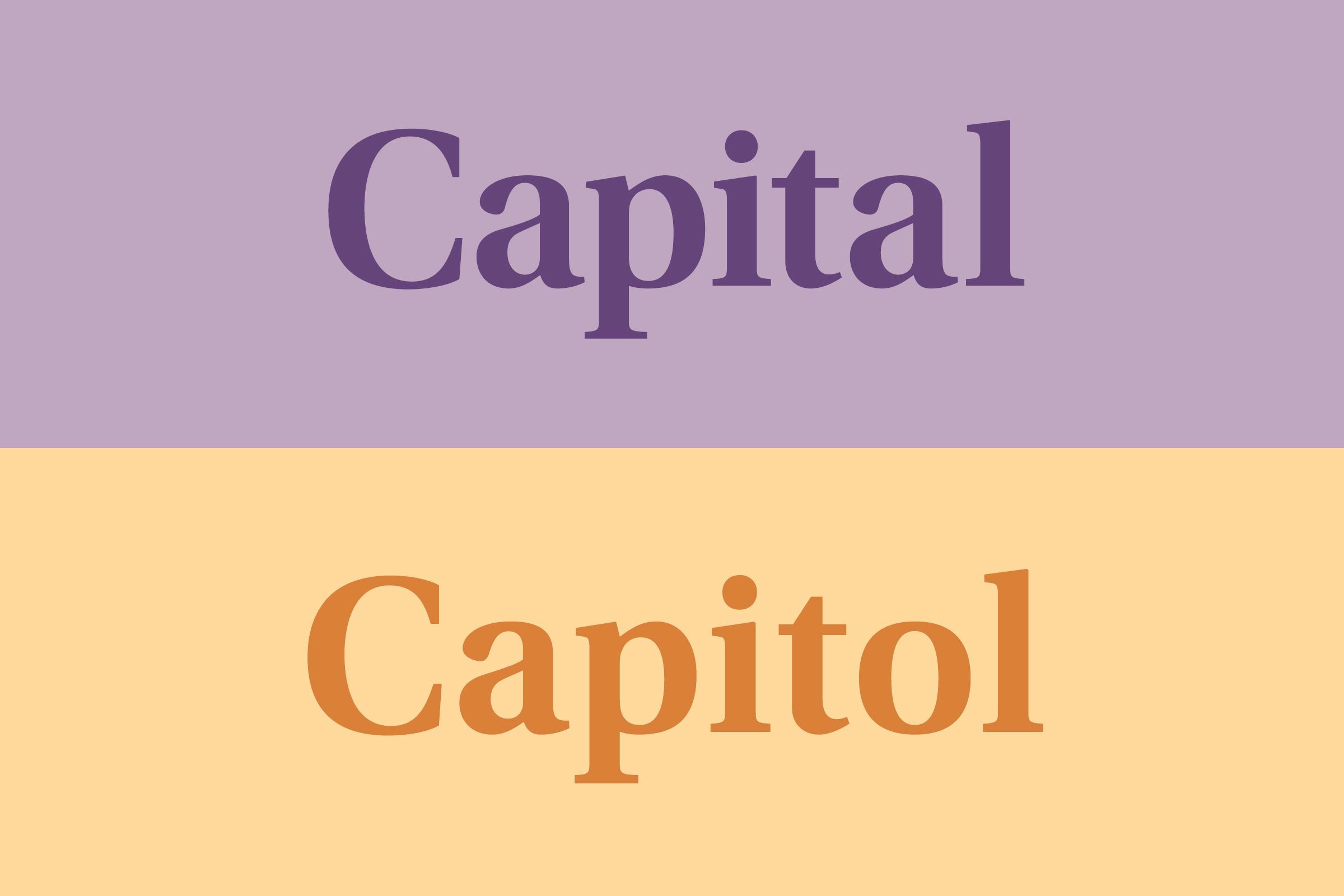 Most of the time you’re using one of these words, you’re probably going to want to use “capital.” The only time the word “capitol,” with an O, is the correct choice is when you’re referring to a building. The Capitol, with a capital C (“capital”! See the frustration?), is the domed government building in Washington, D.C. You can also use “capitol” to describe other state government buildings; the spelling is not exclusive to D.C. The primary confusion arises because despite that, when the word refers to the center of government of a country, state, et cetera, it’s spelled with an A. So, you’d say “The Capitol building is in Washington, D.C., the capital city of the United States.” Phew!

“Capital” is also the version to use when describing uppercase letters; money that’s been earned, as in “financial capital”; or metaphorical prominence, as in “New York City is the theater capital of the world.” And the same goes for the adjective form meaning “utmost,” as in “capital importance,” and the old-fashioned exclamation expressing delight: “Capital!” If you think that’s one of the old-timey words we should bring back, go for it! (But remember it’s spelled with an A!) 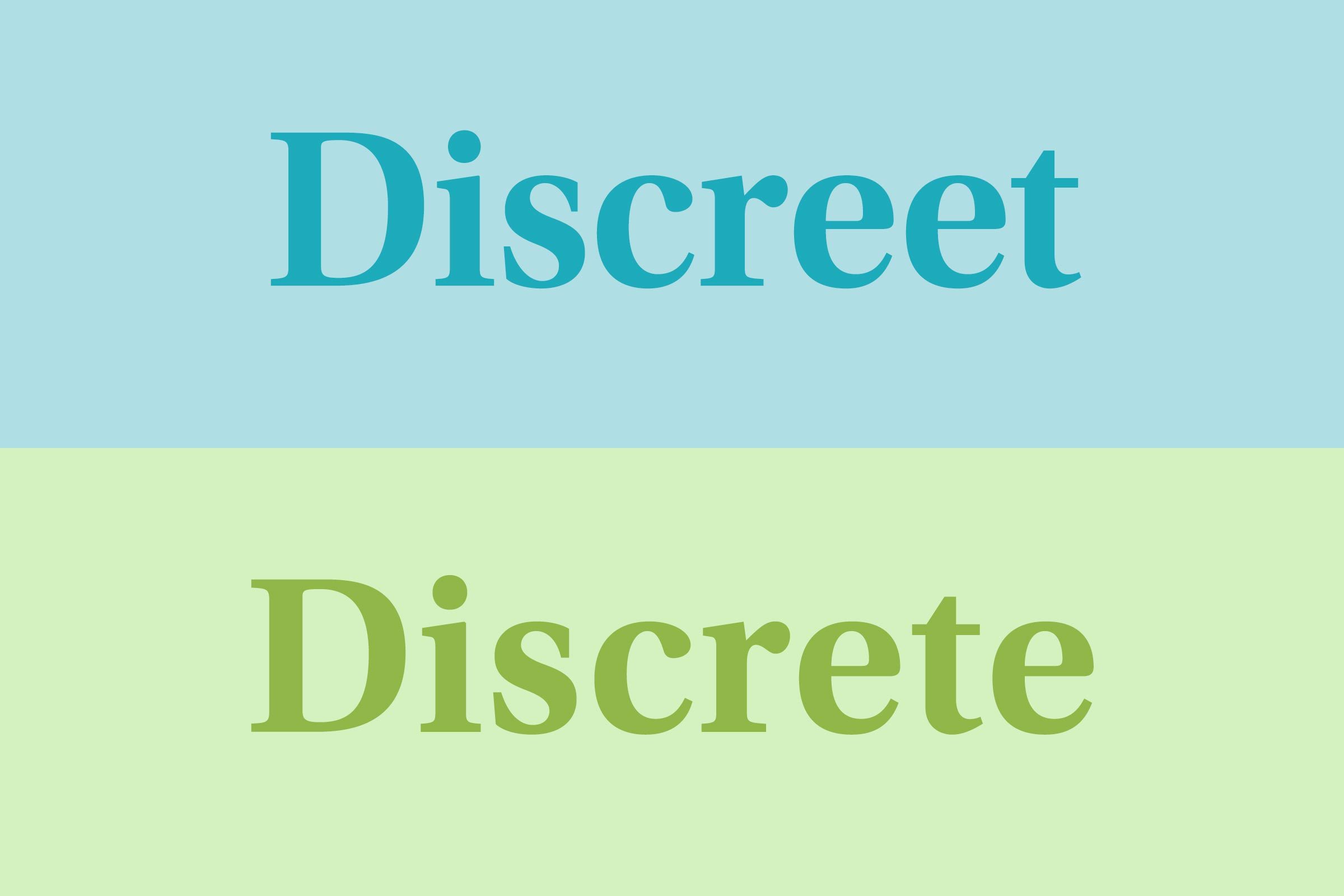 Seriously…why is English so hard?! Between these two, the word you’re probably most familiar with is “discreet,” which means “subtle or unobtrusive.” So if you whisper over the phone in a library, you’re speaking “discreetly,” not “discretely.” “Discrete,” meanwhile, means “separate,” or “composed of separate parts.” For instance: “Each of the counties is a discrete entity with its own constituents.” It’s much less common and often used in mathematical contexts. Get to the bottom of the most confusing rules in the grammar world. 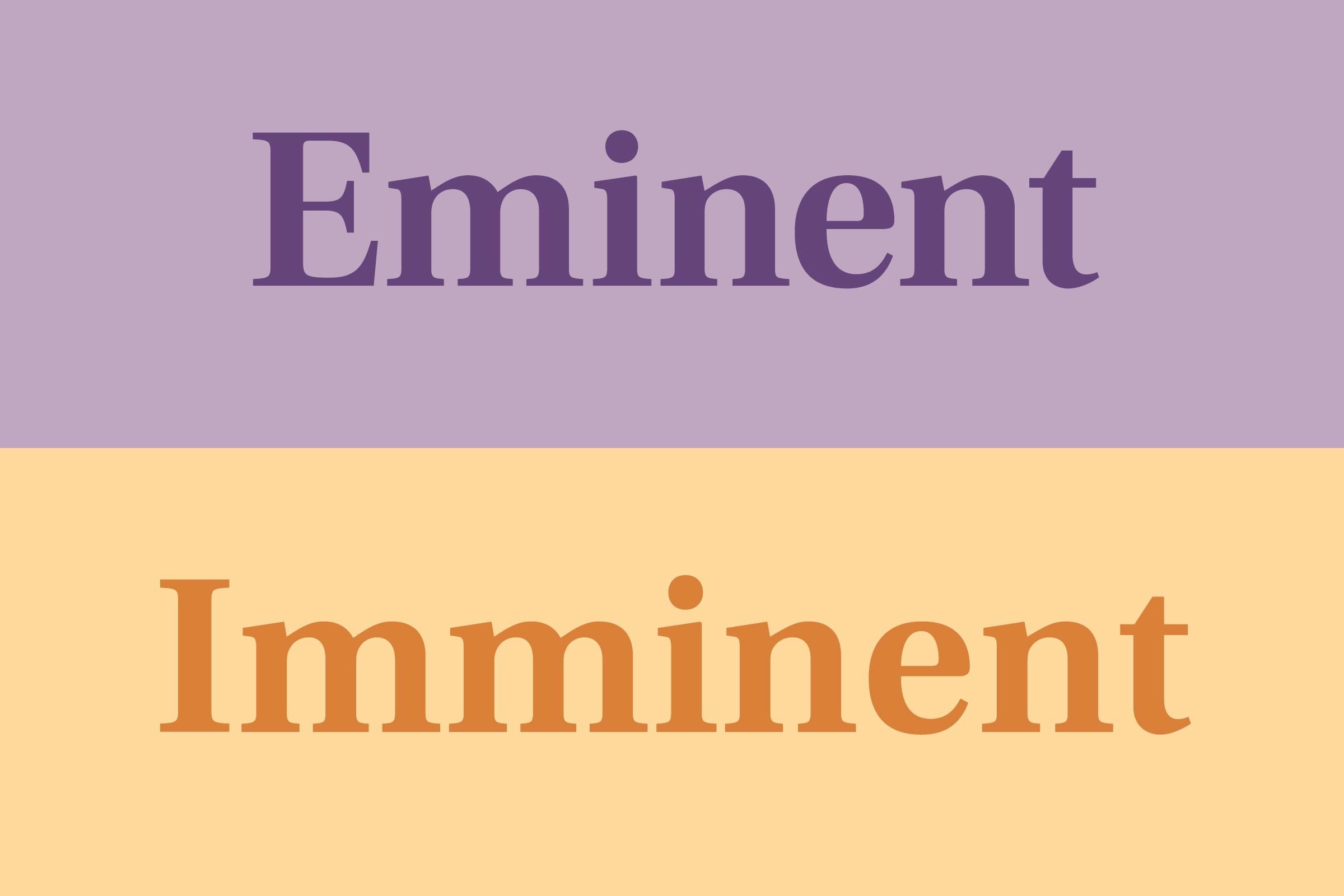 Both of these words are adjectives, but they describe pretty different qualities. If something is “eminent”—or someone, because “eminent” often describes a person—it’s high-profile, respected, and distinguished. Many public figures are “eminent.” But it doesn’t have to describe people; for instance, you could say that Title IX is an “eminent” piece of legislation. “Imminent,” on the other hand, means “about to happen” or “happening at any moment.” It’s often used with urgency, to describe something bad about to happen: “They found themselves in imminent danger!” a thriller novel might dramatically declare. But “imminent” doesn’t have to describe bad things. If you were excitedly awaiting a package, you could also say that the mail’s arrival was “imminent.” Learn more about imminent vs. eminent here. 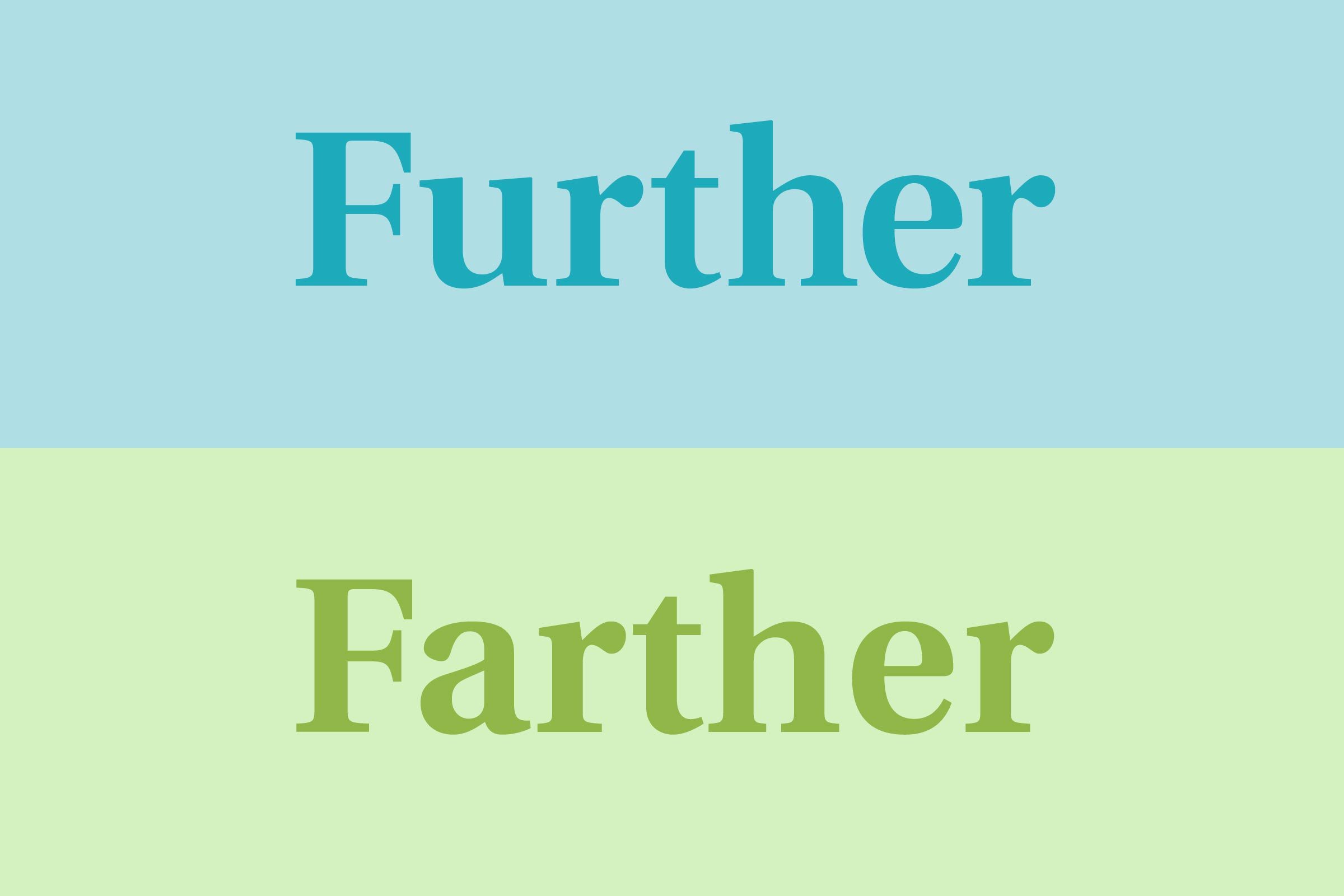 Here’s another one-letter difference that causes serious confusion. “Further” and “farther” mean almost the same thing, but not quite. Use “farther” when you’re referring to a physical distance. For instance, you’d say “How much farther is it to Boston?” You’d also use “farther” to say “You can stretch your arms farther than I can.” “Further,” meanwhile, refers to metaphorical distance, as in, “How much further are you going to take this argument?” 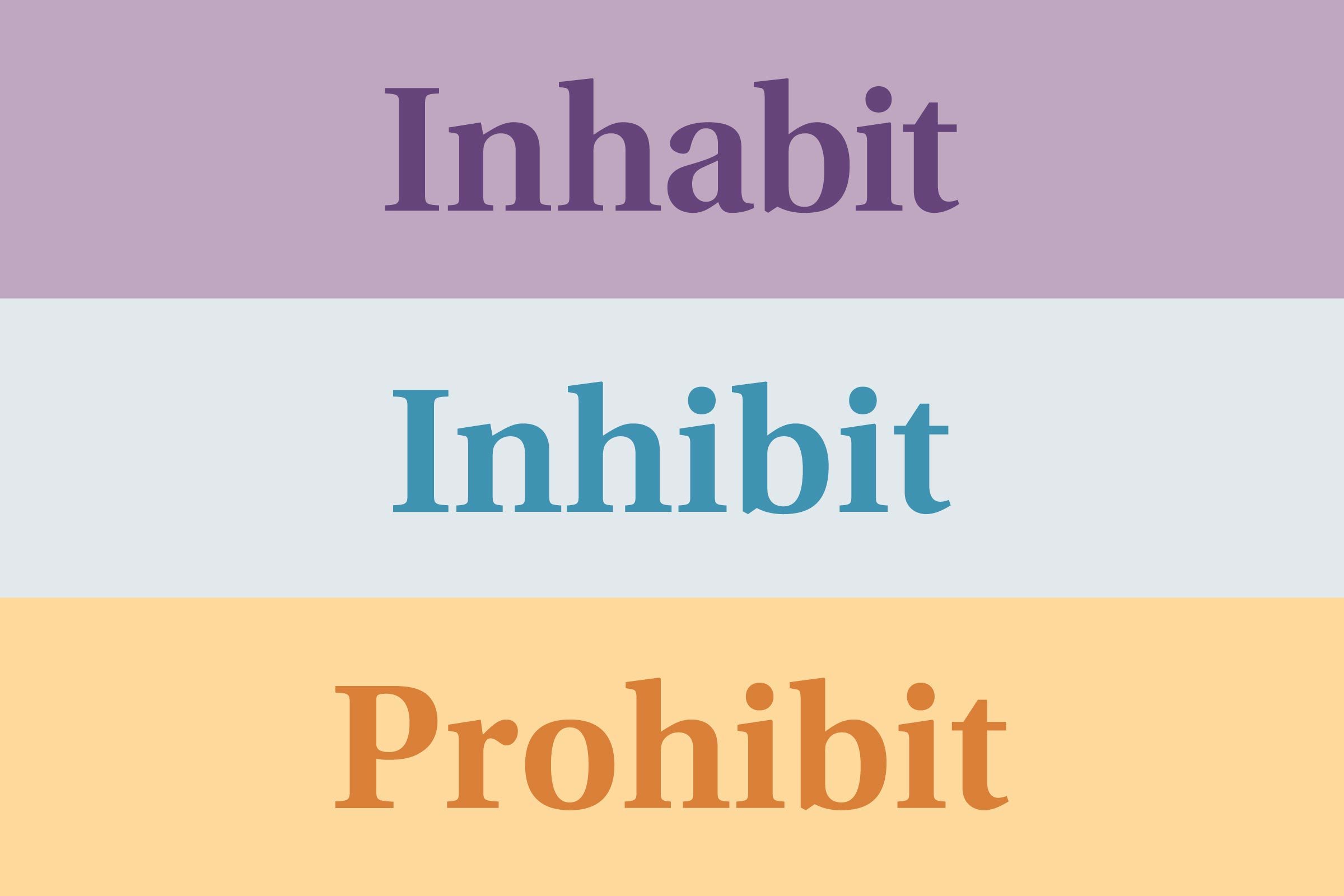 Inhabit vs. inhibit (vs. prohibit)

When trying to decide between these two verbs, think of the word “habitat.” “Inhabit” means “to live or dwell somewhere.” This can refer to people, animals, really anything that can live in a place. If you want to get spooky, you’d also use “inhabit” to talk about ghostly possession: “He believed a spirit was inhabiting his body.”

“Inhibit” has a totally different meaning; it means “to prevent or hinder.” “Inhibit” is slightly different from “prohibit,” another word it’s often confused with. While “prohibiting” is specifically forbidding something, “inhibit” refers to a more general restraint or hindrance. A topical example: “Wearing a face mask inhibits the spread of COVID-19.” (“Inhibit” can also mean “to forbid,” but it’s a less common definition.) 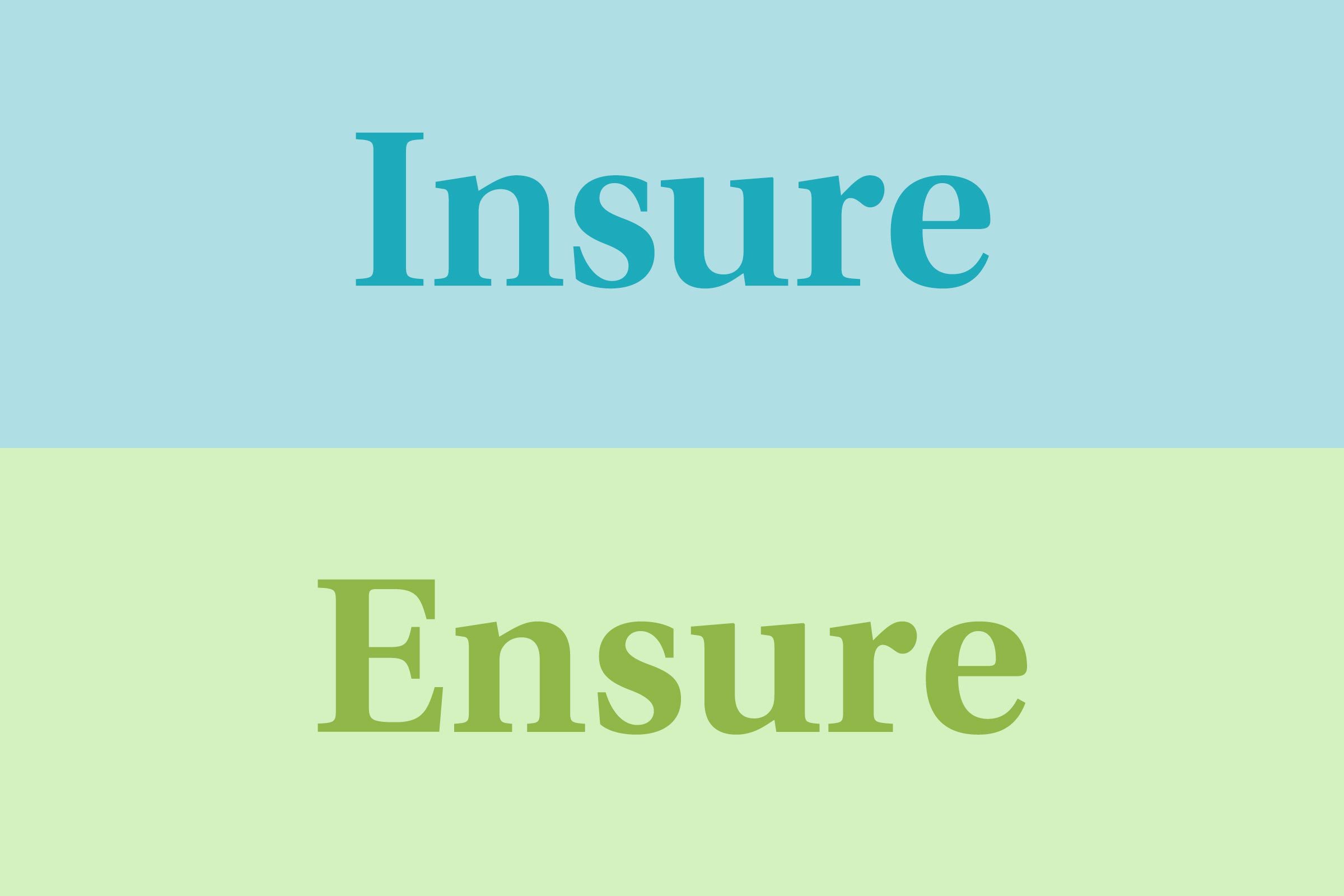 Finally, some similar-sounding words that can mean the same thing! You can use both “insure” and “ensure” when you’re talking about “securing or guaranteeing” something. You could say both “Take a water bottle to ensure you stay hydrated” and “…to insure you stay hydrated.” As you might have guessed, “insure” does have another meaning. This is the word you’ll want to use when you’re talking about insurance, as in “I insure my car with Geico,” not “ensure.” But “insure” doesn’t only refer to insurance. It can also mean the same thing as “ensure.” On the other hand, here are some words that are their own opposites. 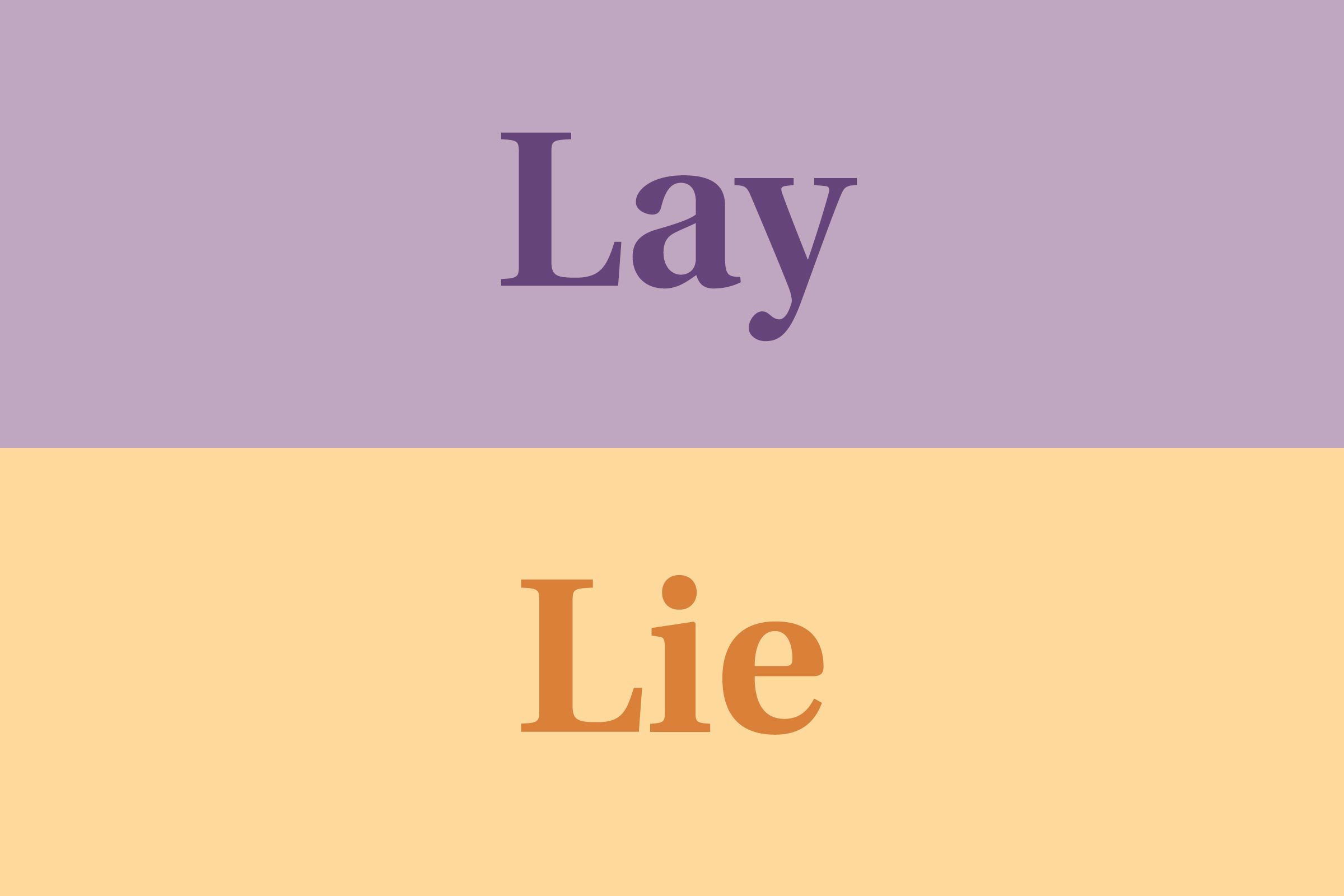 Here’s another one that’s downright mind-boggling. These one-syllable verbs mean (slightly) different things, despite often being used interchangeably. “Lie” means (in addition to its telling-a-fib definition) to recline or assume a horizontal position. So you “lie” down on your bed to go to sleep. “Lay” means something similar—but it needs an object. What that means is that you’re putting something else down into a horizontal position. So you’d “lay” your sleeping baby into her crib. But, to make matters even more confusing, the past-tense form of “lie” is “lay.” So you’d say, “Right after I lay down last night, I had to get up again to use the bathroom.” As for the past-tense form of “lay,” it’s “laid.” Yup, it’s a lot. Here’s more on “lay vs. lie” and how to keep them straight. 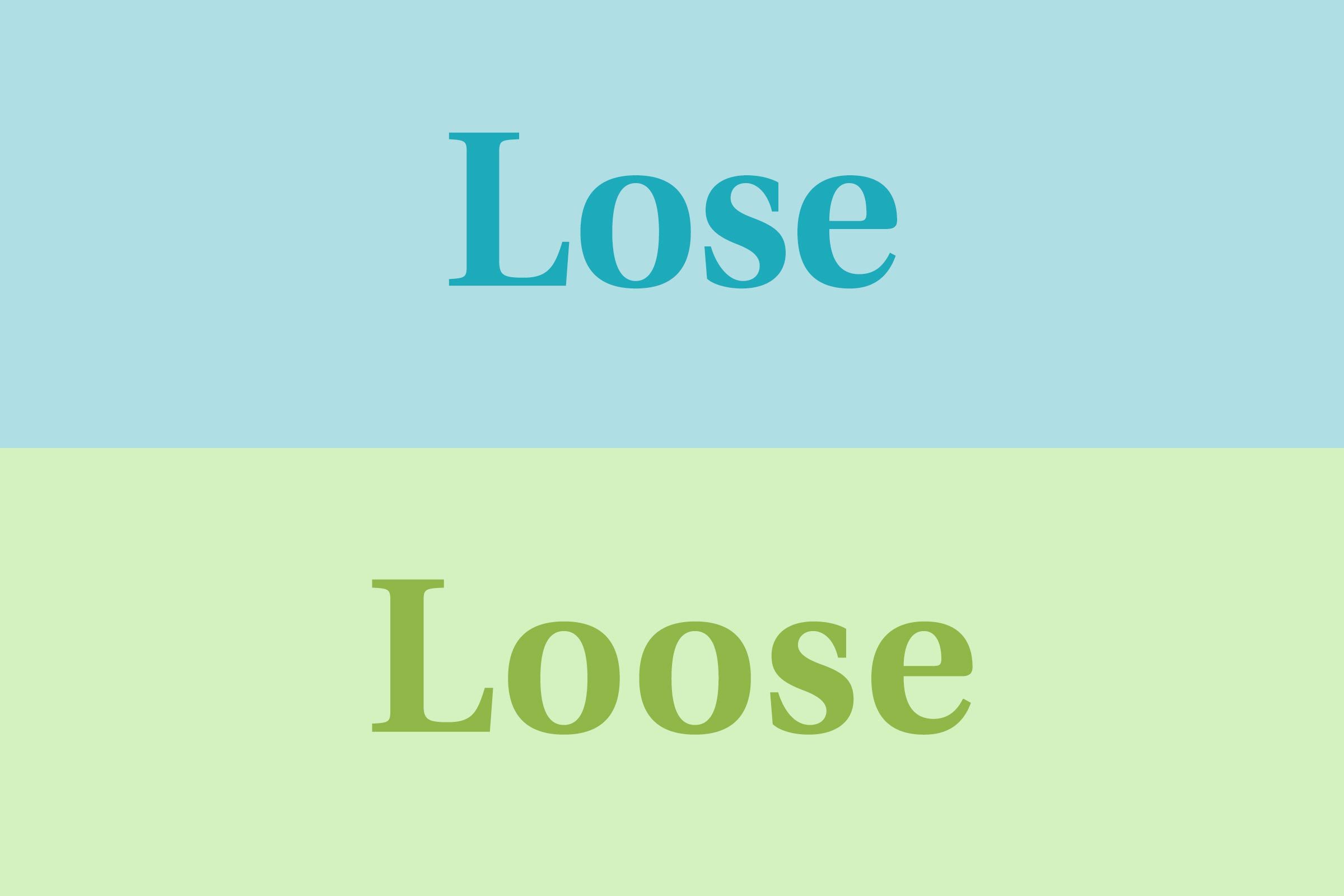 Ah, another tricky one that comes up quite a bit. “Lose” and “loose” are both fairly common words, at least compared to some of these other commonly confused words, and they mean different things. If the word you want to use is a verb, you’re most likely thinking of “lose.” “Lose,” with one O, means “to misplace,” “to come to be without,” or “to come off worse in.” You “lose” your keys, and you can also “lose” your balance or your cool. You also “lose” a sports match or a bet.

“Loose” can be a verb, meaning “to release,” as in “They loosed the racehorses before the gun went off.” But this use is very rare and somewhat old-fashioned. “Loose” is most often an adjective. If your clothing is too big for you, it’s “loose,” not “lose.” And if your dog runs away, she got “loose” (or is “on the loose”), not “lose.” 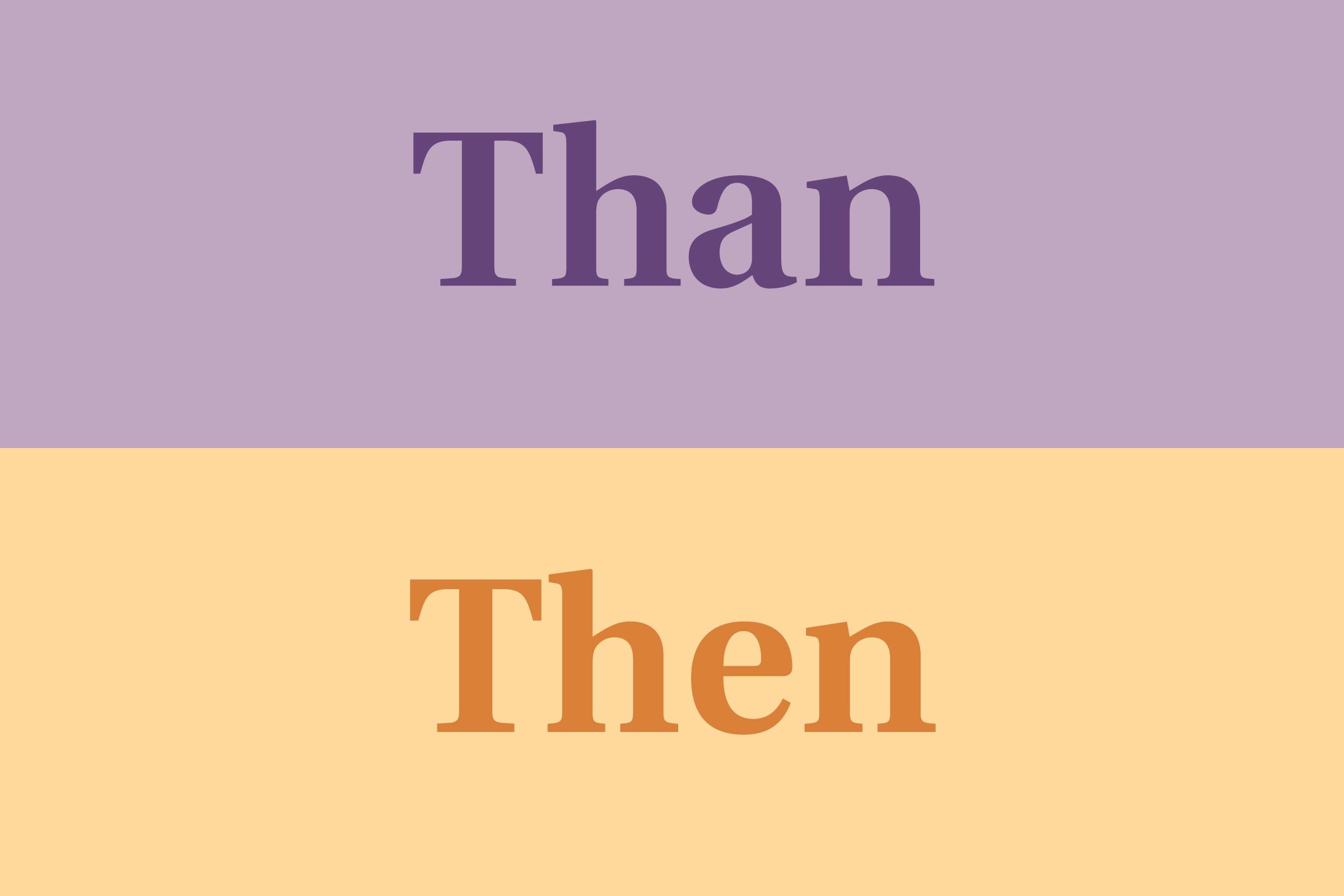 The basic difference between these two is that “than” is a conjunction and “then” is an adverb. But…that doesn’t help too much. “Than” is the word you’ll want to use when you’re comparing things: “I’m faster than you.” “I like this house better than your old one.” You’ll also see this word in the phrase “other than,” which means “except” or “besides”: “Other than the opening scene, I liked the movie a lot.”

“Then” usually indicates time, often in a sequence: “I’m going to the library, and then I’ll meet you at home.” It can also refer to a certain time in the past—”Things were simpler back then“—or in the future—”Great, looking forward to seeing you then!” But it doesn’t have to refer to time. It can also mean “as a consequence,” as in: “If you don’t want to go, then don’t.” To learn more about the difference between “than” and “then” in more detail, check out our full explainer. 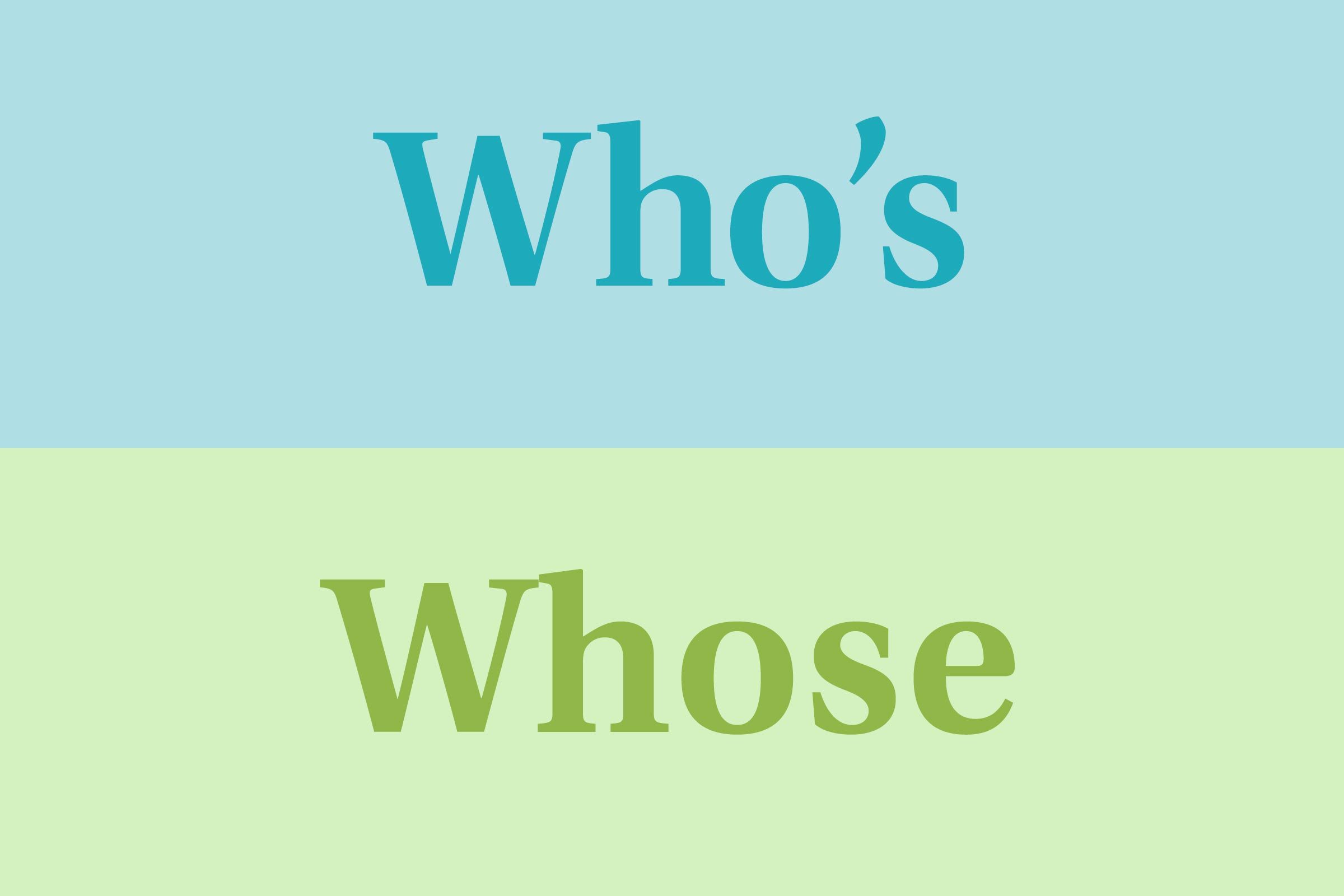 These two are tricky because “who” is the root word of both, so they both have to do with identifying people. “Who’s” is a contraction, shortening “who is.” So you’d say “Who’s going to the park later?” It can also mean “who has,” as in, “He’s the one who’s been texting me.” “Whose,” meanwhile, is a possessive pronoun. You’d say “Whose shoes are these?” not “Who’s shoes are these?” But it doesn’t have to be used in a questioning manner, or for an unknown. You could also say something like, “She’s one of the people whose style I’ve always admired.”