"What do you mean (*hic*) Guinness isn't really black?" 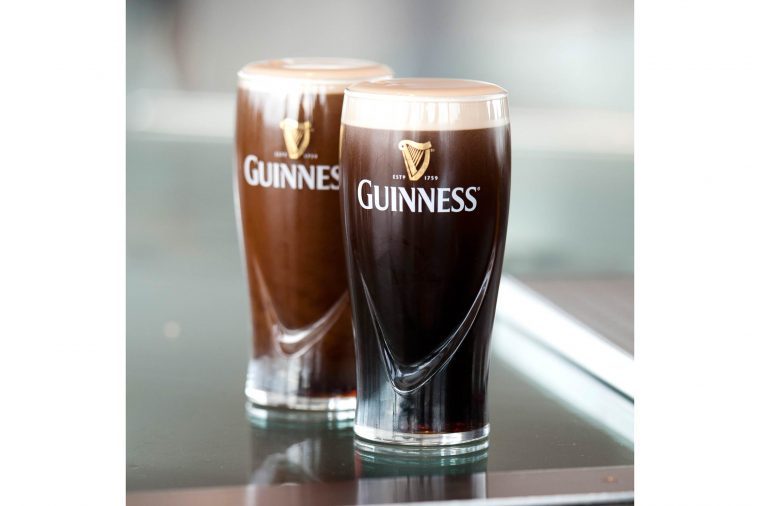 More than 13 million pints of Guinness are guzzled around the world on St. Patrick’s Day. In a toast to the 258-year-old brew, here are 13 foamy facts that make that “pint of plain” taste even sweeter.

Hold your glass up to the light and you’ll see The Black Stuff is actually a deep ruby red. The company attributes this in part to the roasting of malted barley during preparation. (If that blows your mind, don’t even get us started on these widespread food and drink myths that need to die.) 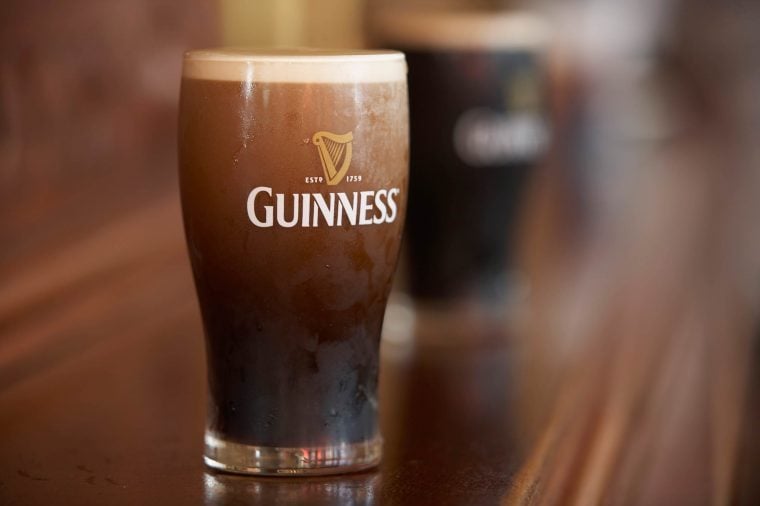 You’re wasting Guinness if you have a mustache.

According to a 2000 U.K. survey, Guinness drinkers with mustaches trap an estimated 162,719 pints of beer in their facial fur every year (each of them effectively paying a “mustache tax” of £4.58 per annum). 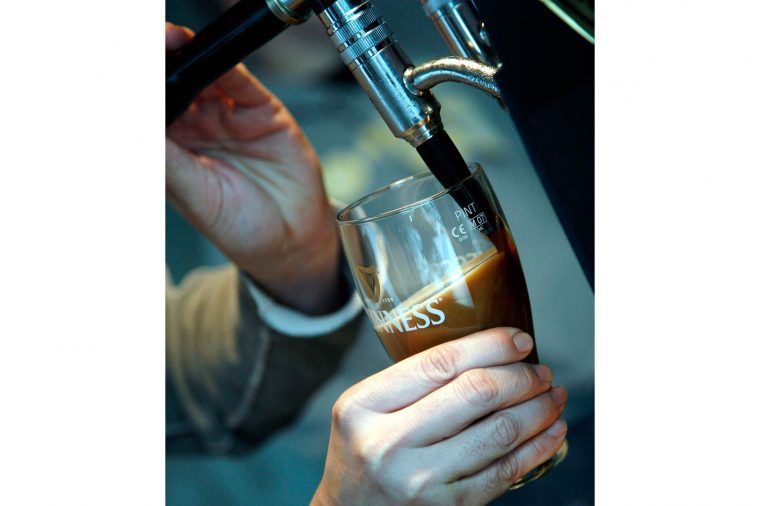 Your bartender didn’t forget you: According to Mark McGovern, former brand manager of the Guinness Storehouse in Dublin, the official, six-step process to pouring a perfect pint of Guinness takes “119-and-a-half seconds.” The key is “the surge”: allowing a three-quarters-filled pint to rest for about a minute as nitrogen bubble rise to the top of the glass and form the beer’s signature velvety head before topping her off. 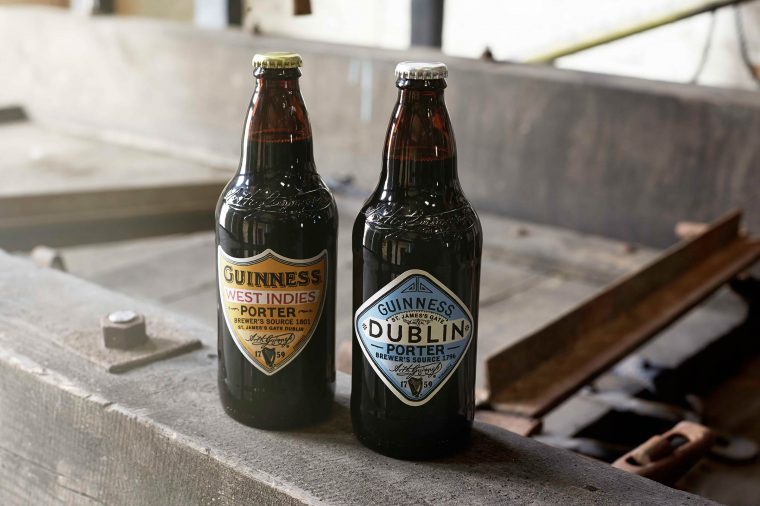 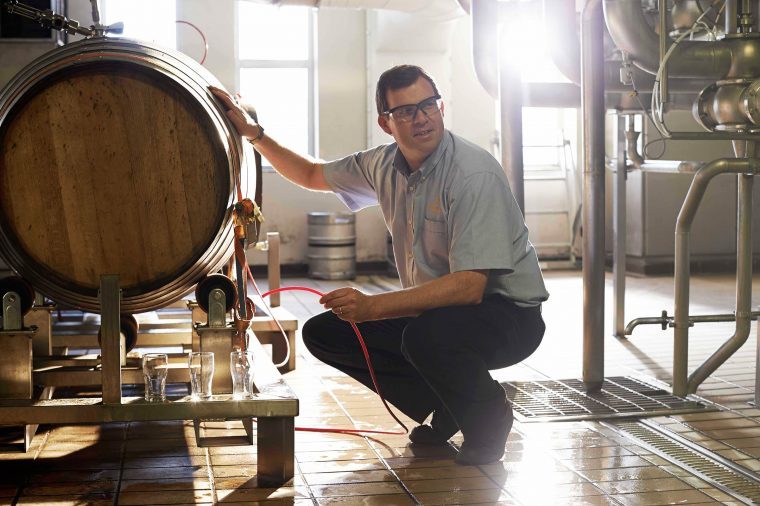 The little white ball in your can has a name (and a powerful purpose).

The little white balls that clink around aluminum cans of Guinness are called “widgets” (patented by Guinness in 1969), and are filled with nitrogen-infused beer like you’d find on tap. When you pull the ring on your can, the change in pressure causes that nitrogenated beer to bubble out into the rest of the brew, creating a foamy head like you’d find on draught. (In our editorial opinion, this is why a can of Guinness is actually better than a bottle.) 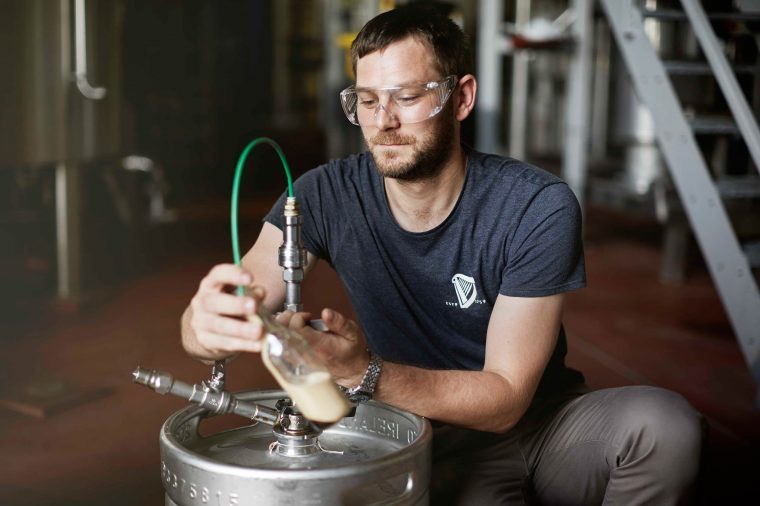 That ball is more important than the Internet.

At least, according to the British public. Per Guinness.com, in 1991 the Guinness widget was awarded the Queen’s Award for Technological Achievement, “beating the Internet to be voted by Britons as the best invention of the previous 40 years.” 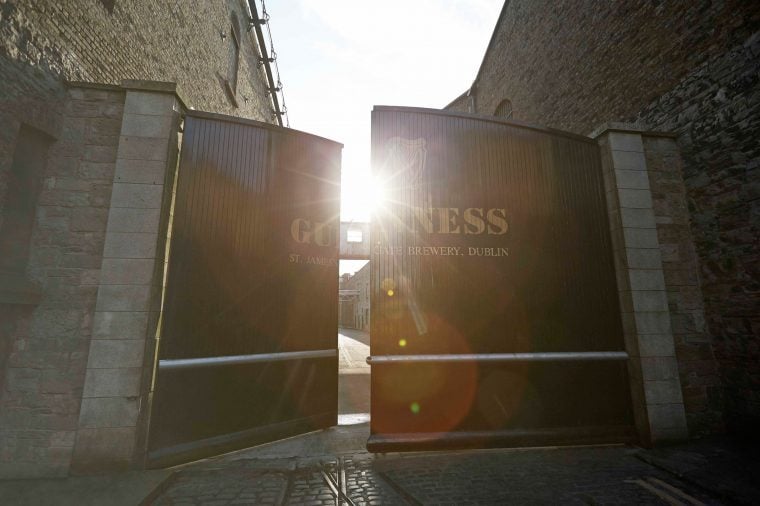 The Guinness Book of World Records was made to settle a pub argument.

One November day in 1951, Sir Hugh Beaver, former Guinness managing director, was out shooting with some friends when they began to argue over which was the fastest game bird in Europe. When reference books supplied no answer, Beaver decided that the drinking world desperately needed one volume that could single-handedly settle any pub dispute. Three years later, The Guinness Book of Records printed its first thousand copies. It has since been published in 23 languages, in 100 countries. 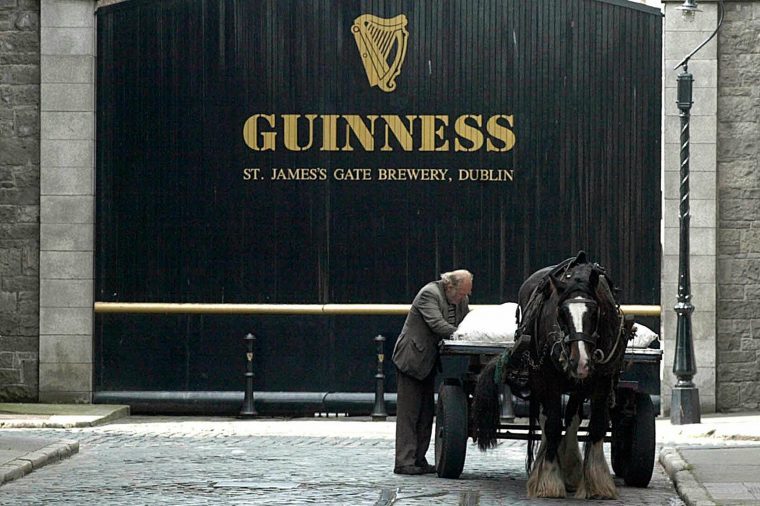 The Guinness brewery signed a 9,000-year lease in Dublin.

In 1759, Arthur Guinness began brewing at the unoccupied St. James’s Gate Brewery, apparently liking the facilities enough to sign a 9,000-year lease on the building within a few months. At £45 per year, the lease was incredibly far-sighted—but became moot when the brewery expanded and had to buy up the underlying land outright. 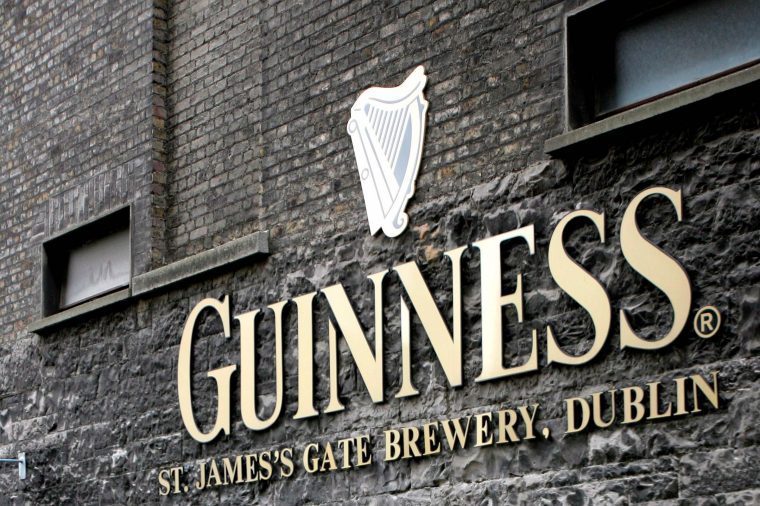 It was marketed as a health product.

The first-ever national print advertisement for Guinness touts the stout as a “valuable restorative after Influenza and other illnesses,” and invokes doctors who commend the beer’s ability to enrich blood and cure insomnia. Their slogan: Guinness is good for you. (That part is still hard to dispute). 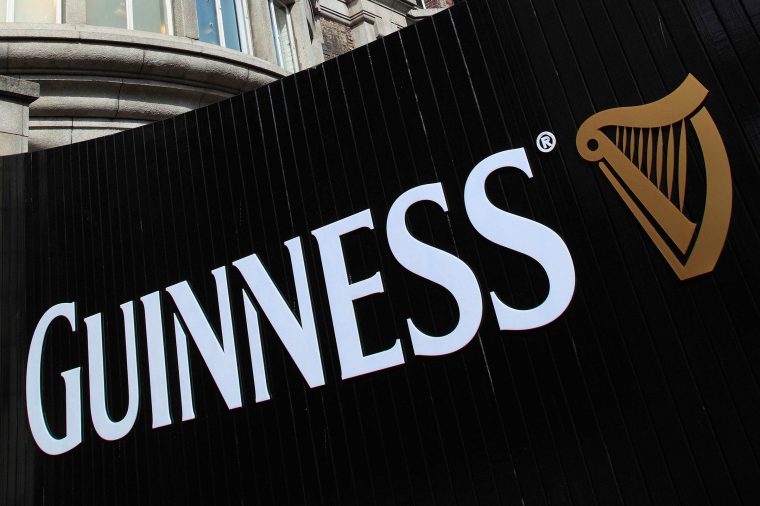 They even handed it out to blood donors.

Promoting the myth that Guinness is a high source of iron (it isn’t), the brewery made a habit of handing out free bottles to blood donors throughout Ireland. In 2010, parent company Diageo put a cork in the tradition, having long ceased marketing the brew as medicine. 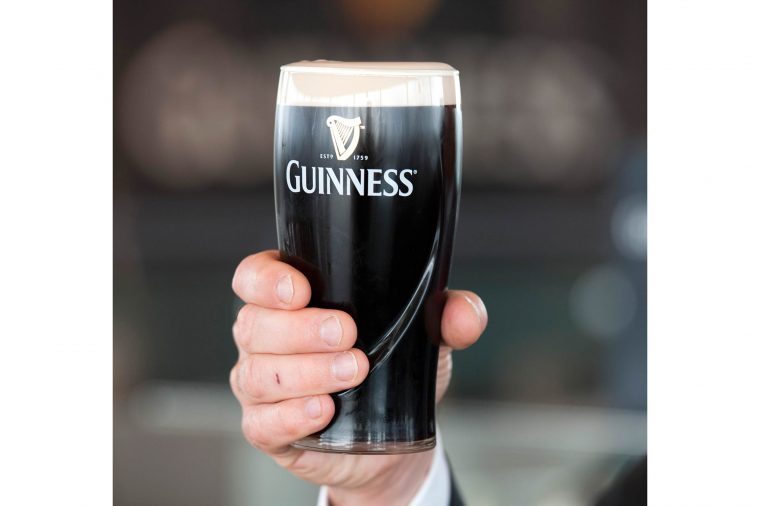 It is, thankfully, very low-cal.

A 12-ounce can of Guinness only contains about 126 calories—only 16 more than a Bud Light. The reason, for better or worse, is that Guinness has a modest alcohol content of only 4.2% (so don’t beat yourself up for putting away two or three of them after a few hours at the pub). 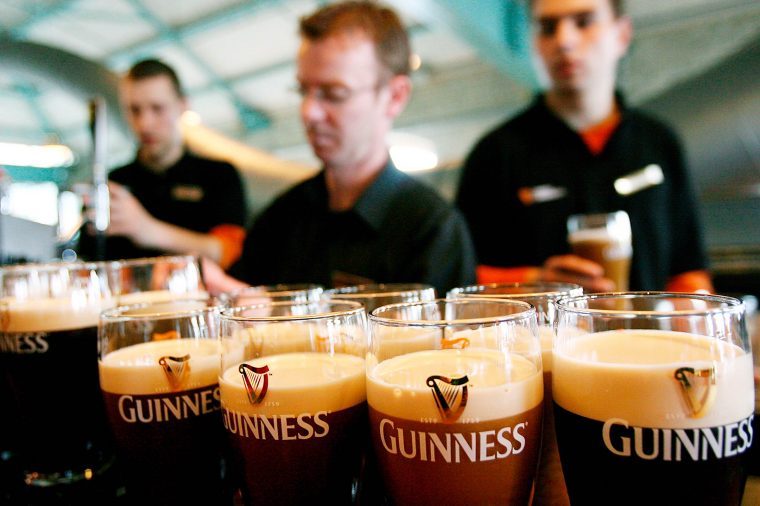 Like many breweries, Guinness uses isinglass—a filtration agent made from fish bladders—to help remove yeast particles from their beer vats. But take heart, ye thirty vegans: The company is currently in the process of installing isinglass-free systems at St. James’s Gate, and Australian-brewed Guinness is already vegan-friendly. Guinness helped make Ireland what it is.

Arthur Guinness was as much philanthropist as entrepreneur. According to Stephen Mansfield, author of The Search for God and Guinness, Arthur “poured himself in founding the first Sunday schools in Ireland. He gave vast amounts of money to the poor, sat on the board of a hospital designed to serve the needy and bravely challenged the material excesses of his own social class. He was nearly a one man army of reform.” Some even say Guinness saved Ireland during WWII. 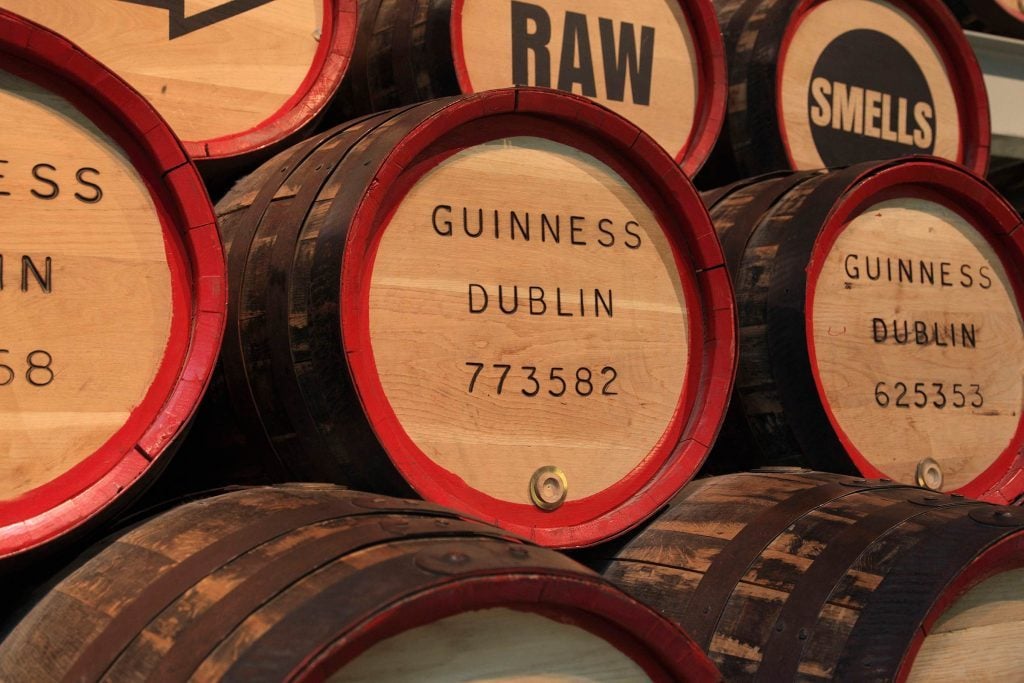 A survey of 71 bars in 14 countries conducted by the Institute of Food Technologists found that a pint of the plain truly does taste better on the Emerald Isle. This is likely due to freshness (all Guinness sold in Ireland, the U.K., and North America is brewed in Dublin) as well as pub-to-pub quality control (a bar outside of Ireland is more likely to use an inferior combination of carbonating gases in their taps). Cheers!