11 Seafood Facts That Will Change How You Eat Fish Forever

Yes, some fish contain mercury and yes, some of the rumors about farmed fish are true, but we got the facts on seafood so you can eat this superfood worry-free. 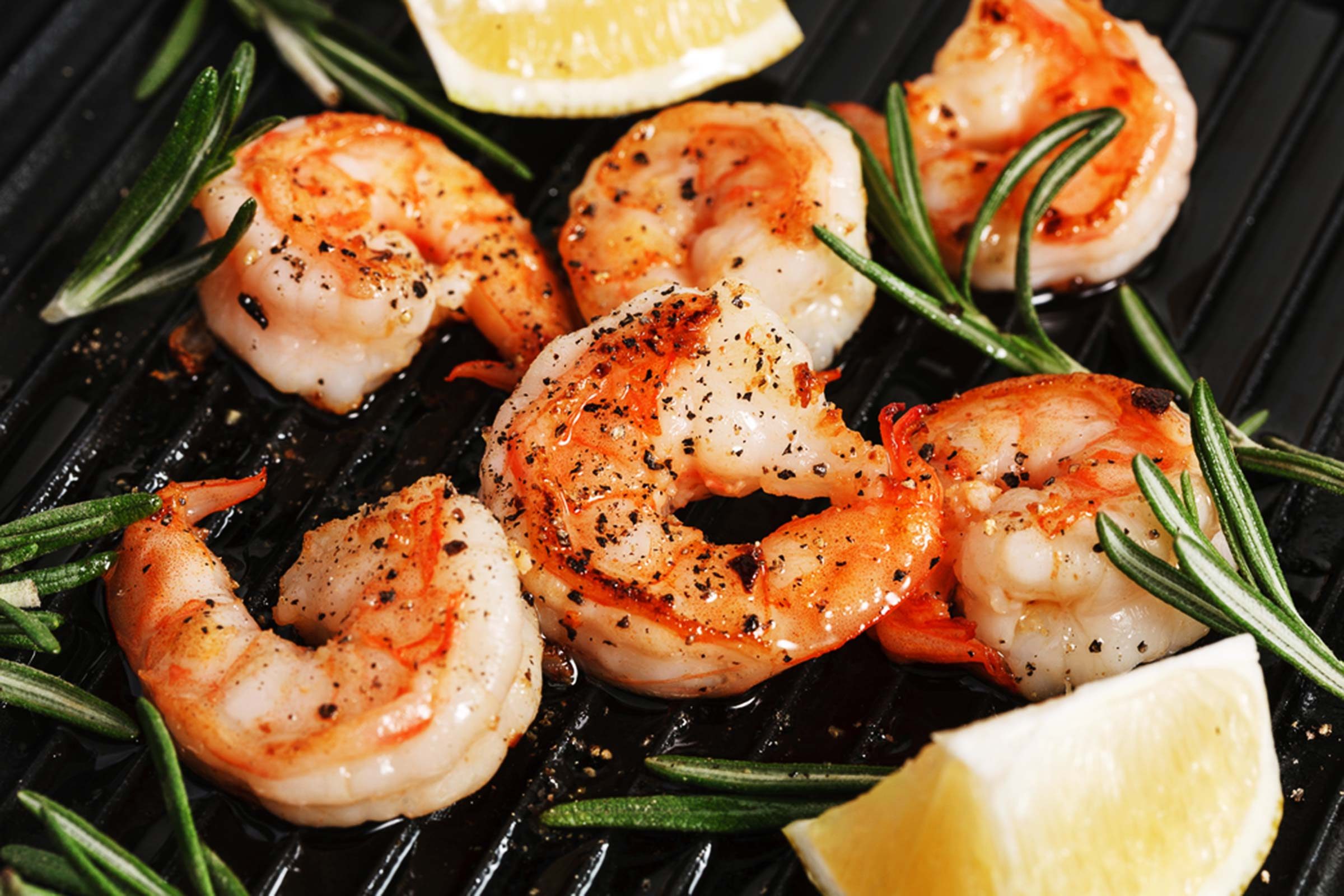 Why you should know more about fish now

There’s no doubt that fish is a vital protein with plenty of brain-boosting, heart-loving, inflammation-busting nutrients. According to a Tufts University study, eating seafood helps prevent some 54,000 deaths from heart disease and stroke each year. The latest Dietary Guidelines recommend eating at least two to three servings (or 8 to 12 ounces) of seafood each week. And while over half of the seafood consumed in the U.S. is entirely from three categories (salmon, shrimp, and canned tuna), there are a lot more tasty, nutritious, and safe fish to try. If you want to get some of the same benefits, but aren’t a big fan of seafood, you can always try out fish oil’s amazing health benefits. 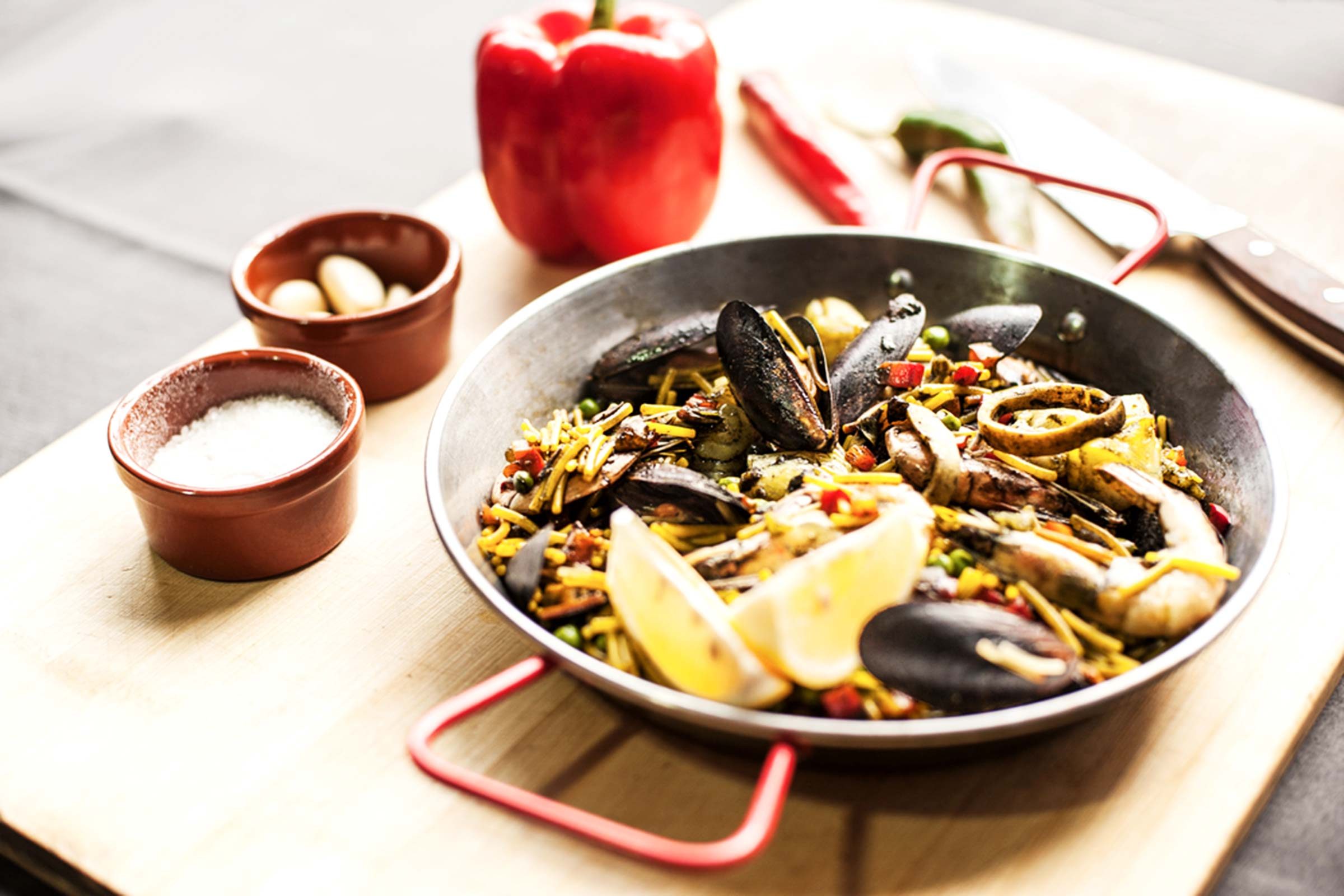 Experts call organic seafood the Wild West, since there’s no such official designation. “There are European and foreign organic standards, and labels may refer to those, but it is important to remember that these are legally meaningless in our country,” says Larry Olmsted, author of Real Food, Fake Food. “Manufacturers may or may not adhere to standards and can put any organic claims they want on seafood labels.” That doesn’t mean all fish is of equal quality. Read on for other criteria to look for. Speaking of “fake food,” what is imitation crab meat made of? 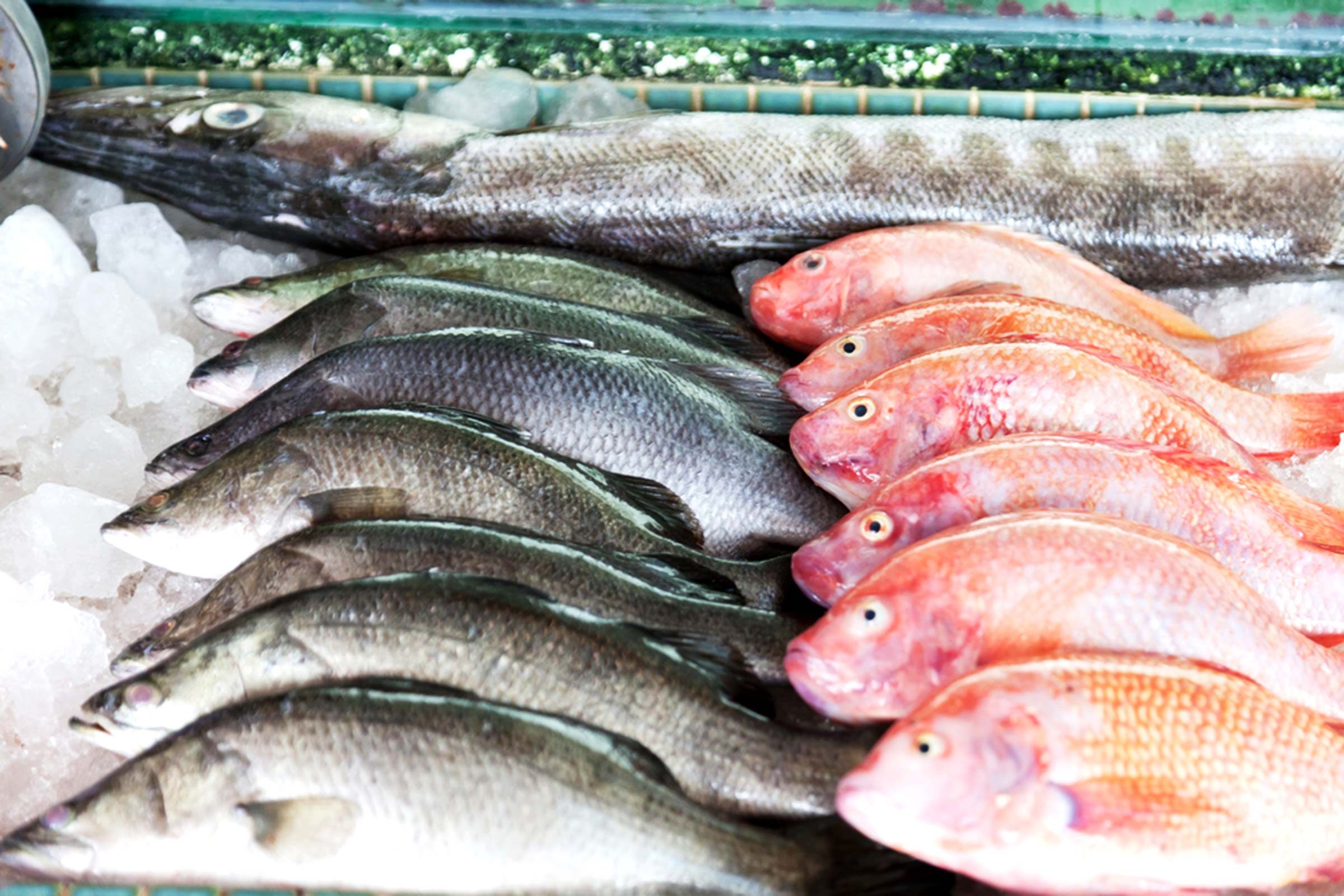 When choosing seafood, always choose varieties that are considered sustainable, meaning it’s caught or farmed in eco-friendly ways. Here’s how to know if the beautiful fillet on special is sustainable: Download the free Seafood Watch app on your smartphone, which recommends what should or shouldn’t buy in terms of sustainable seafood. “Use it at the fish counter when shopping for seafood, at a restaurant while you are dining out, or when you’re looking for retailers in your area that source sustainable seafood,” says Nathan Lyon, a chef, cookbook author, and sustainable ambassador for the Monterey Bay Aquarium. 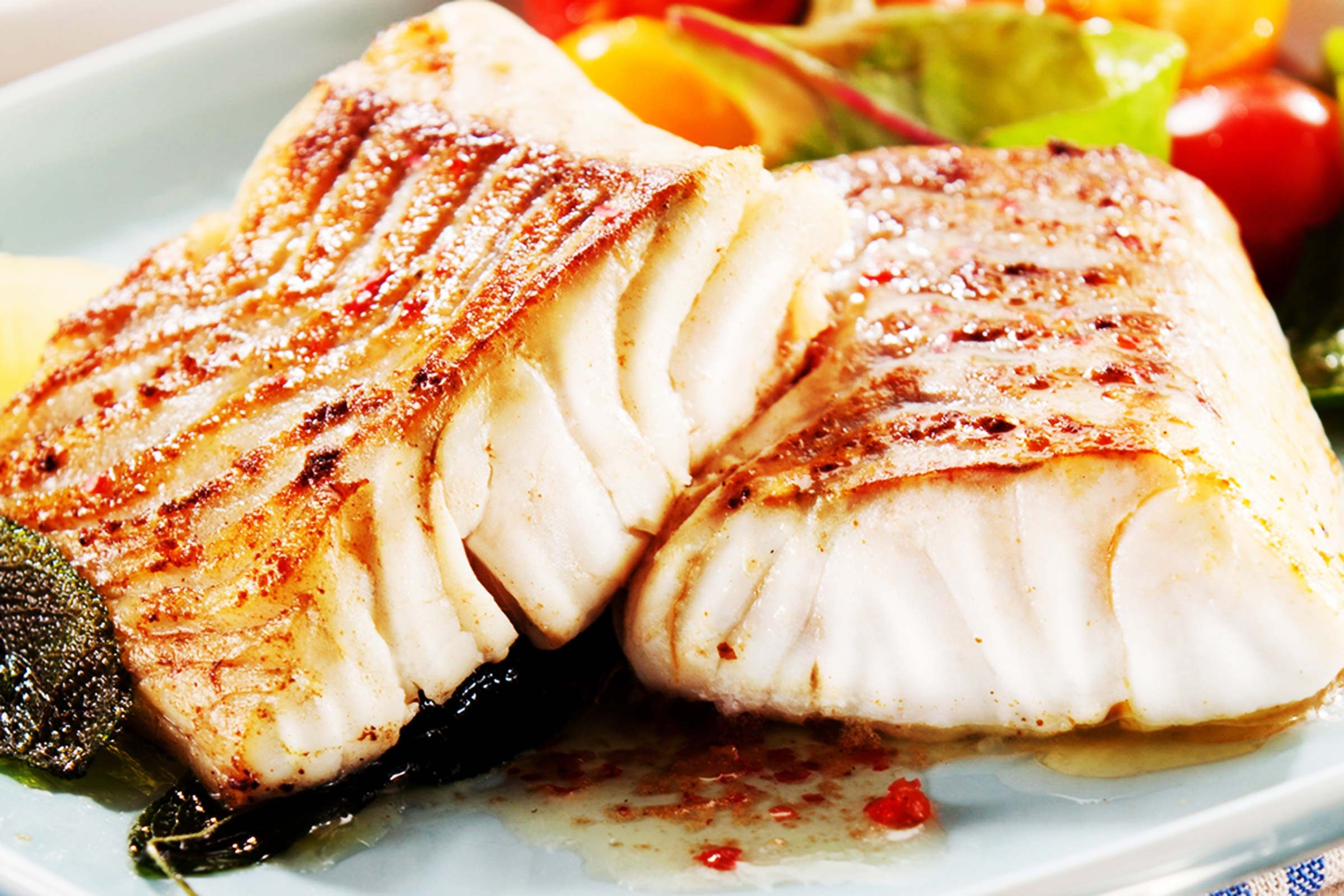 Look beyond salmon and shrimp

\So-called “trash fish” or underappreciated species such as lionfish, rockfish, cape shark, pollock, and redfish, are readily available, inexpensive and tasty, but people don’t know much about them. That’s beginning to change, however, as chefs get behind this movement. “Pollock is just as good as cod, porgy is so flavorful that you can use it just like you use bass, and cape shark is one of the most used fish in England for fish & chips,” says Seadon Shouse, chef at Halifax in Hoboken, New Jersey, who routinely turns “trash fish” into treasure. “Redfish is a quite delicate fish, like fluke of flounder, so it works well paired with mild flavored sauces such as a lemon parsley butter or a picatta.” Here are six delicious fish recipes to try. 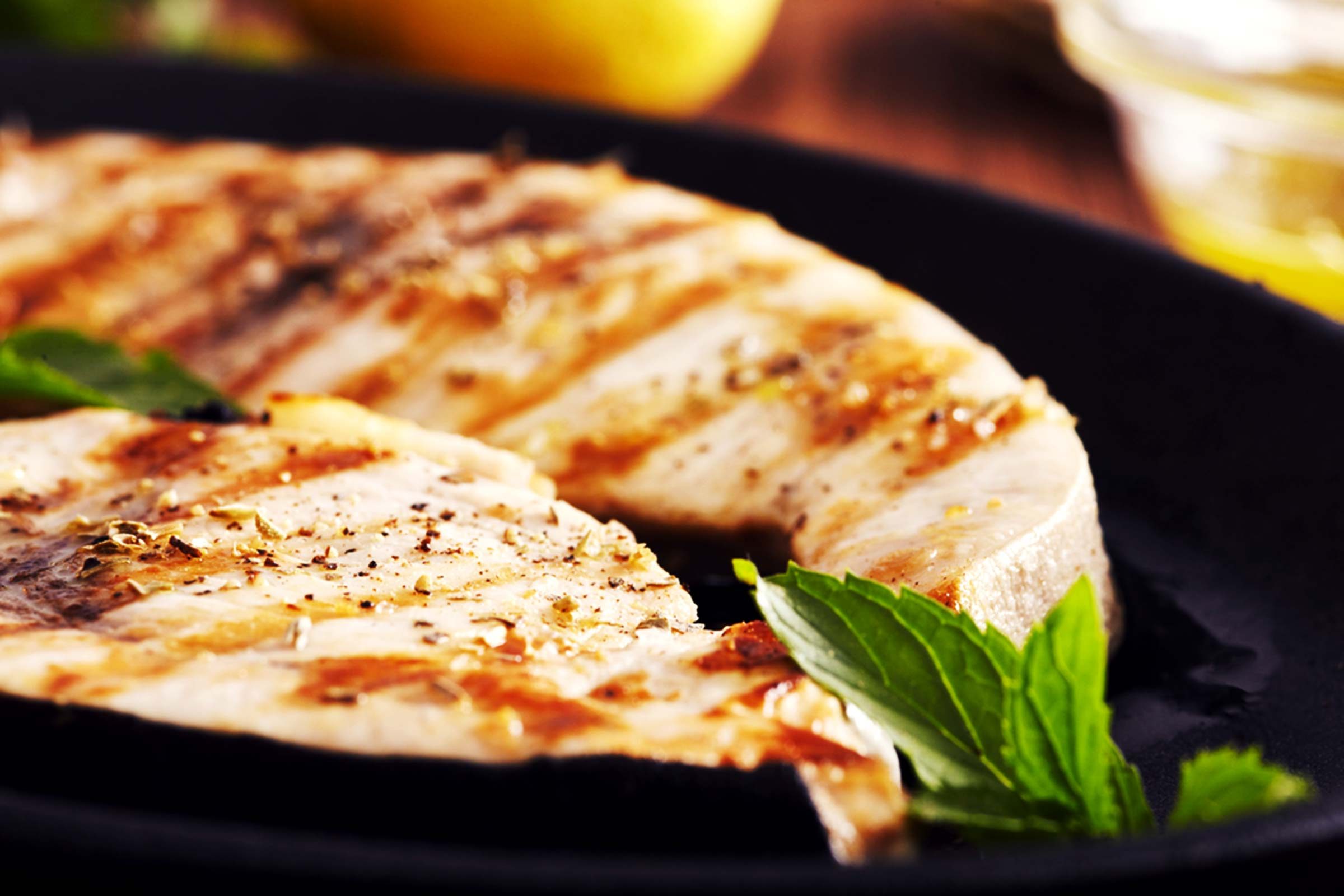 While swordfish, shark, tilefish, and King mackerel are known to contain mercury, which can negatively affect the central nervous system, the average person won’t get mercury poisoning from eating recommended amounts of commercially sold seafood (meaning, seafood that is sold in restaurants and supermarkets), says Rima Kleiner, a dietitian and blogger at Dish on Fish.

However, in January, the EPA updated their advisory regarding mercury-laden fish and concluded that women of childbearing age (16–49), pregnant and breastfeeding women, and young children should seek out fish that’s lower in mercury. If you’re in any of those categories, it’s recommended that you eat two to three servings (8-12 ounces for adults and children over age 10, smaller amounts for younger children) of a variety of fish and shellfish each week. (Consider skipping canned tuna in favor of tuna packed in pouches to avoid can-lining chemicals such as BPA or its newer alternatives, which may be linked to adverse health effects.) 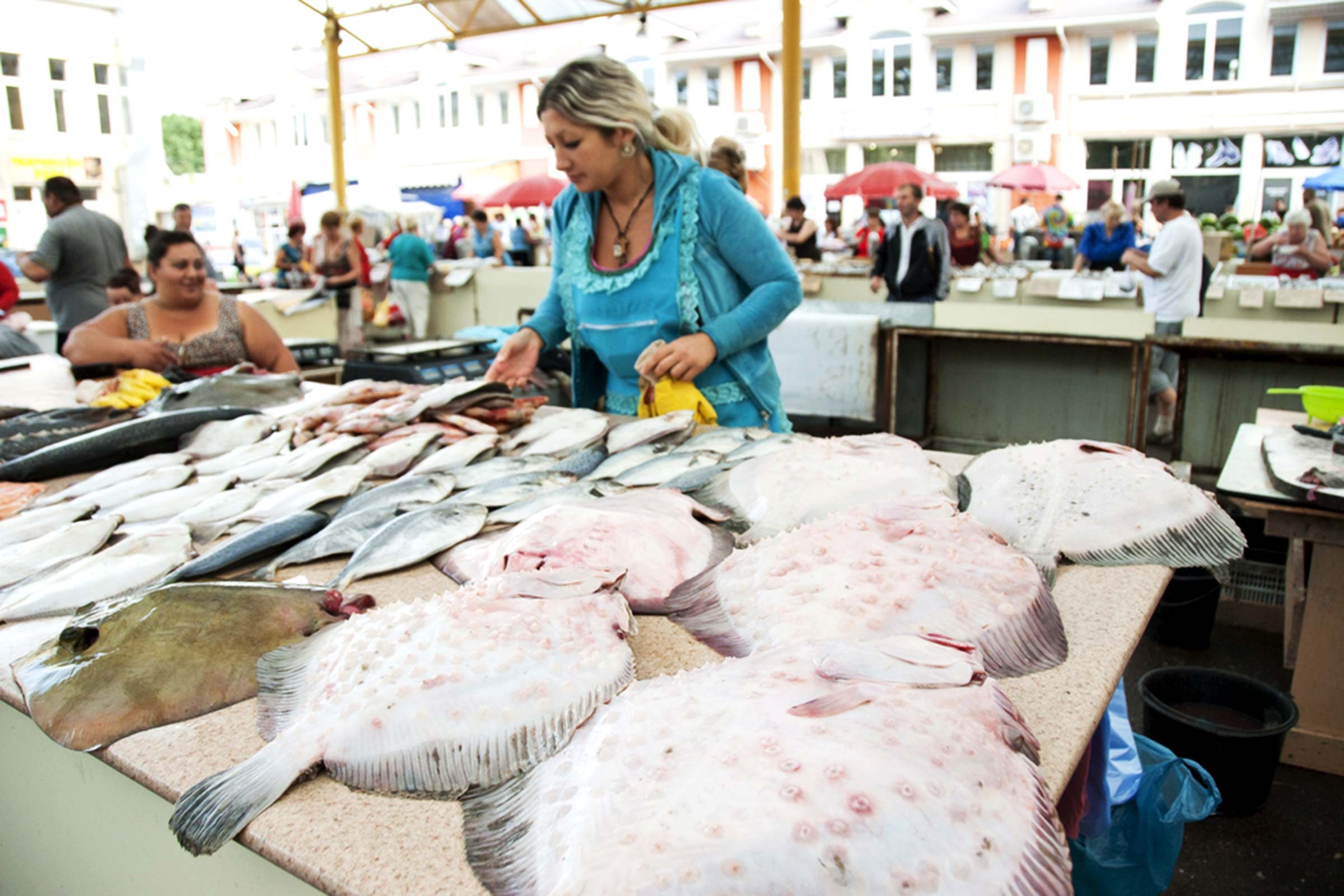 There are grave concerns about farm-raised fish, including the fact that the fish are often given antibiotics and treated with pesticides. But not all farmed fish is off the table. If the fish are processed at a reputable place where they don’t use antibiotics or pesticides, farmed fish isn’t terrible, according to Matt Bell, meat and seafood senior category manager at Dean & DeLuca, a gourmet grocery chain in New York City. And farmed fish does have some notable benefits. “As demand has gone up for seafood, so has the need to farm fish. Farmed fish can be a good alternative to depleting our oceans and over fishing. Aquaculture done right is a way to supplement the wild caught fisheries and preserve the environment.” Farmed seafood also affords the consumer year-round product availability, consistency, and variety. “Like any farm there are good and bad farmers, so it’s important to know the farming practices that are used from where you are sourcing,” he adds. The staff at the fish counter should have some background information about the farms, so don’t hesitate to ask. 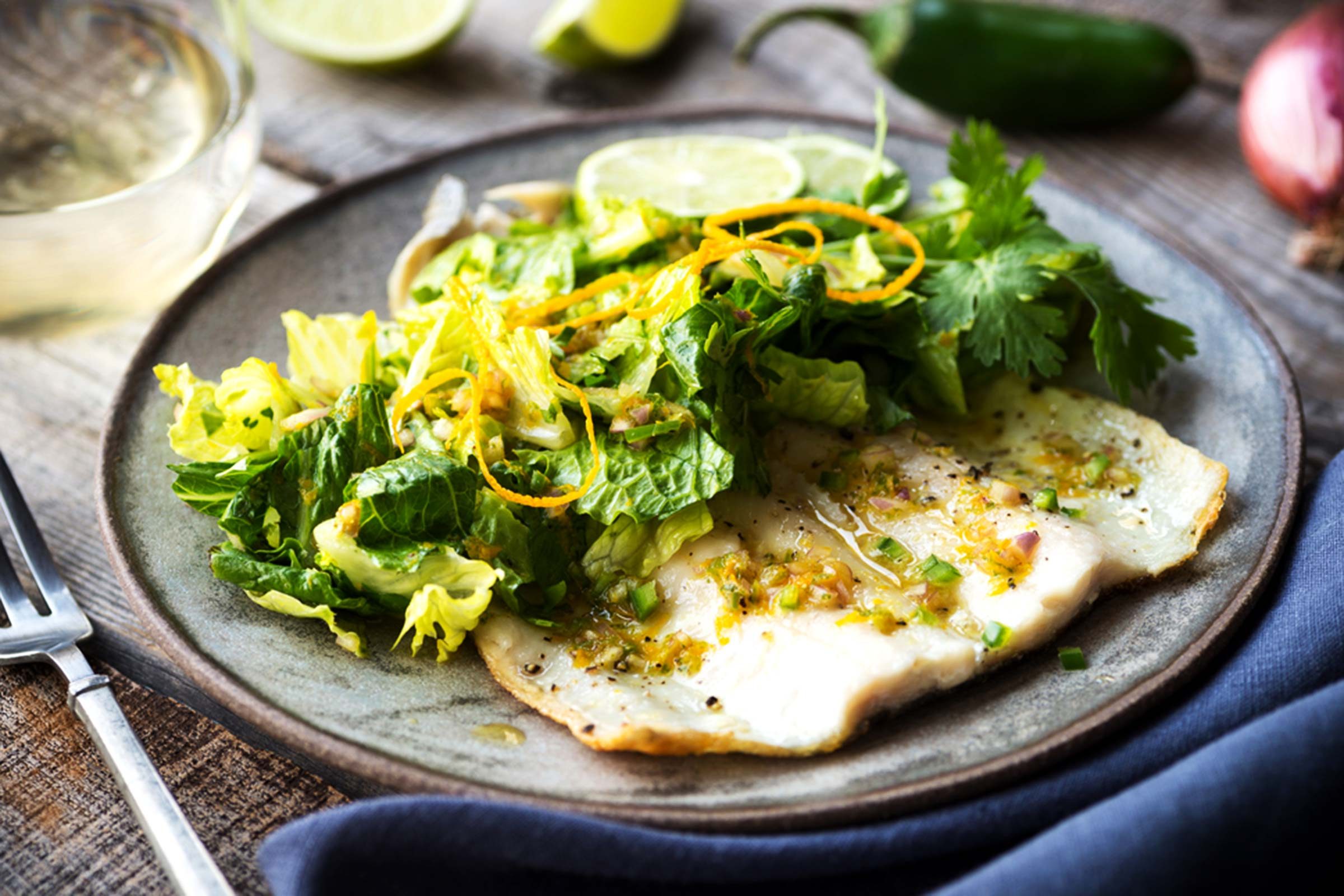 If you’re seeking fish that are best for your brain—e.g. the ones with the most omega-3 fatty acids, which boost cognitive function and working memory—seek out varieties such as Alaskan salmon, Atlantic mackerel, sardines, anchovies, and freshwater trout. “These are packed with these healthy fatty acids and are extremely low in toxins,” says Bell. Check out the other best brain foods you should be eating. 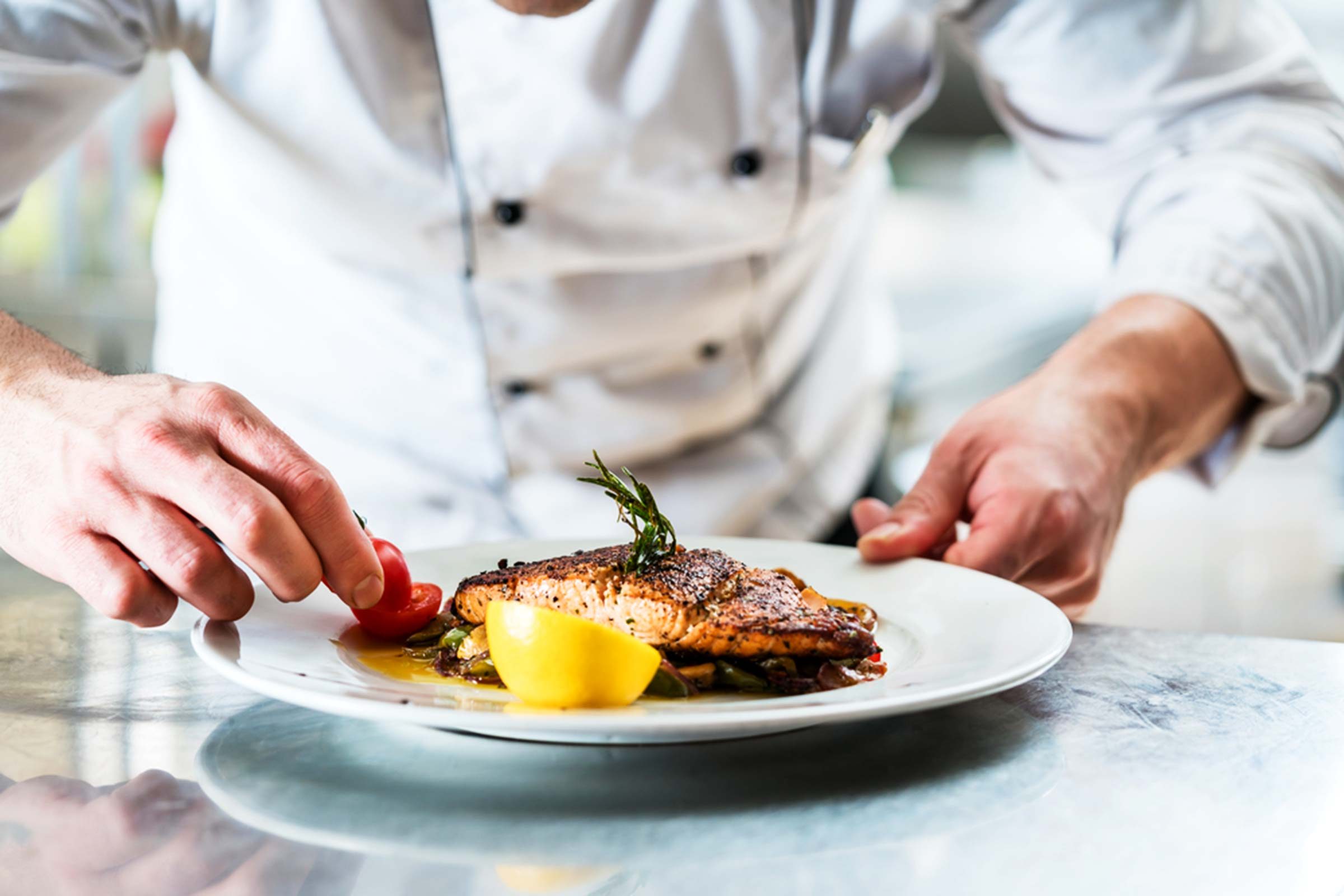 Take advantage of the whole

For some chefs, it’s time to eat more of the fish we’ve already caught instead of focusing on new or overlooked species of fish. “Over the past few years I have been utilizing what I consider to be the true trash fish, the parts of the fish typically thrown in the trash,” says Michael Nelson, a chef at GW Fins in New Orleans. “I’m turning the fish collars, cheeks, skin, fans, balloons, and even scales into innovative new preparations.” (To be safe, leave the scales to the pros.) 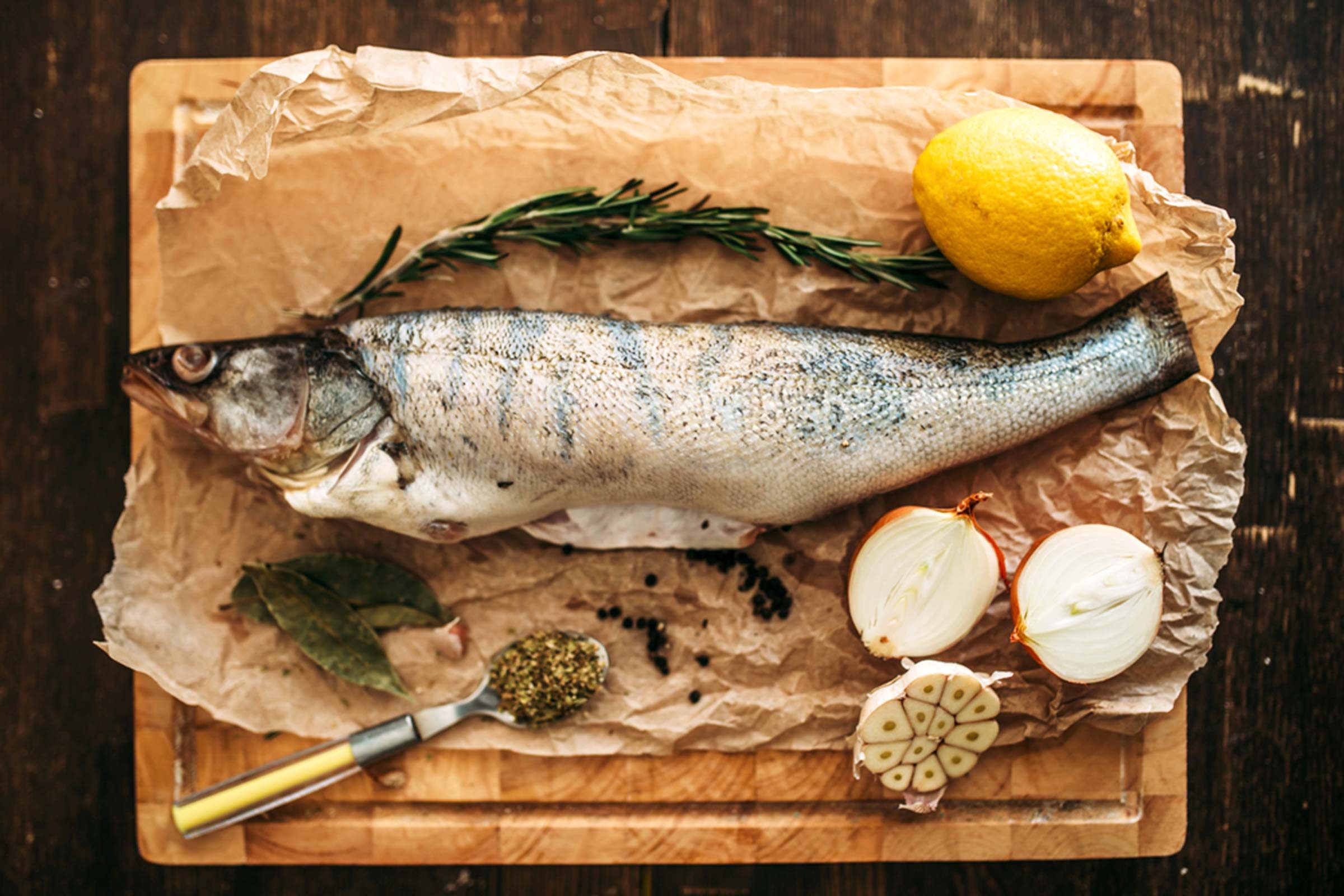 If you’ve purchased seafood at the market and noticed a slight fishy smell to it, that’s actually normal, says Lyon. “Just rinse the seafood under cold water and pat dry, and the smell will disappear,” he says. “That said, if the fish has a strong odor like ammonia, discard it immediately.” Always investigate your local market’s delivery schedule and make sure there’s plenty of turnover. “Many smaller markets get deliveries daily with the exception of Sundays,” says Bell. “We depend on quicker turnovers in inventory to keep product at peak freshness. A ‘shopped’-looking fish case at the end of the day means you’re getting fresh fish first thing in the morning.” (Here’s how to get rid of the fish smell in the kitchen.)

Watch out for deals that are too good

In a report from conservation group Oceana, buyers are warned not to put too much faith in your fish order. 21 percent of fish sampled from sellers across America was incorrectly labeled and was actually a cheaper type of fish. “If the price is too good to be true, you might want to choose something else,” said Kimberly Warner, a senior scientist at Oceana and one author of the report. The mislabeling—which happens at all levels of the supply chain—often includes marking farmed fish as wild caught fish, not-sustainably catching the fish as per label requirements, or marking an imported cut as locally caught. In addition, cheaper, less desirable fish are often intentionally mislabeled by someone in the selling process. This can be incredibly dangerous if the end-buyer is allergic to a certain type of seafood. 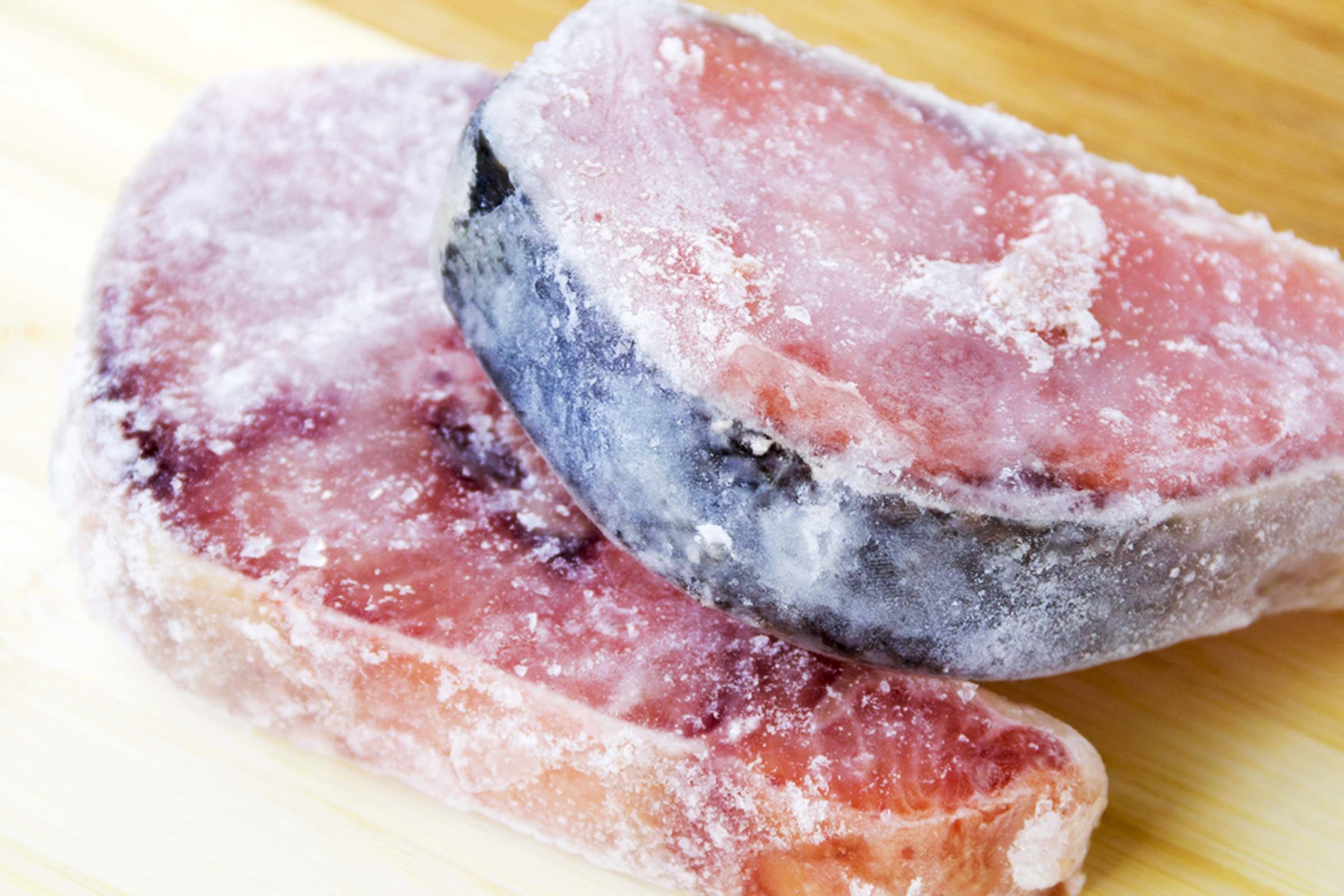 If you don’t have access to a top-notch seafood store or seafood department at your local supermarket, consider this chef tip: Frozen fish is a great choice. “Fish are usually frozen immediately after being caught,” Lyon says. “This means that frozen seafood is often of a higher quality than what you find fresh at the seafood counter (and it’s less expensive too).” Tip: To thaw seafood, place it in the refrigerator. So you don’t have to worry about whether or not the fish at your favorite local restaurant was frozen either! Just don’t buy these 8 types of fish when you eat out!