The Most Famous Movie Dog the Decade You Were Born

Around the time you were born, were canine cinephiles sending fan mail to Rin Tin Tin, weeping over Old Yeller, or cheering on Air Bud?

For dog lovers, and for animal lovers in general, few things can provide the joy (and often the unrestrained tears) of a good, heartfelt dog movie. And those movies are only as good as the dogs that make them! You may have a favorite on-screen canine, but do you know which one was the biggest deal the decade you were born? These fun behind-the-scenes facts about movie dogs come from the book Citizen Canine: Dogs in the Movies by Wendy Mitchell, which you can buy here. Several of these prominent pooches became well-known for what are undeniably “dog movies.” Others, like Dorothy’s Toto and Annie’s Sandy, charmed moviegoers in films where they weren’t even the star! Plus, check out our list of favorite dog movies to watch with your pooch.

Rin Tin Tin the German shepherd has quite the success story. He was found with the rest of his litter in a destroyed kennel by Lee Duncan, a World War I soldier, who brought him to the States. Duncan instantly noticed how well the dog responded to training, and he became a movie star! Throughout the 1920s, he had several notable silent film roles that made moviegoers fall in love with him—he reportedly amassed over 50,000 fan letters in a single month! His first big role was Where the North Begins in 1923. He then played a wolf, Lobo, in 1925’s The Clash of the Wolves and did some incredible stunts, including bounding down hills and even climbing a tree. According to Citizen Canine, Rin Tin Tin is said to have racked up more votes for Best Actor at the first-ever Academy Awards, in 1929, than any human actor. (And Charlie Chaplin was a nominee!)

No, you probably wouldn’t consider 1939’s The Wizard of Oz a “dog movie.” And yet you can’t deny that two of its most famous quotes are: “I’ll get you, my pretty, and your little dog too!” and “Toto, I have a feeling we’re not in Kansas anymore.” Toto made a major impression on moviegoers that remains to this day. Toto’s portrayer was a Cairn Terrier named Terry (and though Toto was a he, Terry was a she). Both her trainer, Carl Spitz, and Judy Garland herself helped ease Terry’s nerves on set; the wind machines reportedly made her nervous. Though Terry performed in more than 16 movies, The Wizard of Oz was one of only two that she received credit for. Oz also became so famous that Spitz would eventually just change her name to Toto. Toto/Terry was one of the most famous onscreen dogs that made massive amounts of money.

Nowadays, the name “Lassie” is virtually synonymous with “dog,” right along with “Fido” and “Rover.” Why? Because of the 1943 film Lassie Come Home, and its canine star. The original Lassie’s name was actually Pal—or, make that his name, because he was a male Rough collie! Pal got quite the incredible lucky break—according to Citizen Canine, he was originally brought on as just a stunt dog. He proved his worth by impressing the director during a challenging river scene, and received the promotion of a lifetime! Pal would go on to reprise the role in six more films, as well as two TV pilots, throughout his 18-year life. By the way, here’s how “Fido” became a default dog name.

Disney’s Old Yeller, from 1957, might be the quintessential “dog movie that makes you unashamedly cry” classic. And the story of this film becomes even sweeter when you learn that Yeller was played by a rescue dog! The trainers Frank and Rudd Weatherwax found the dog, Spike, at a shelter. His yellow coat—he was thought to be a yellow Labrador/mastiff mix—and massive size made him perfect for the part. But it turns out Spike almost didn’t get the role! He’d spent lots of time around kids, so Walt Disney wasn’t sure he’d be tough enough to play the fierce guard dog Yeller. Frank Weatherwax spent weeks training Spike up to prove Walt wrong, and sure enough, Spike won him over.

This movie title is something of a mouthful—the film was called Greyfriars Bobby: The True Story of a Dog—but its canine star was pint-sized! Also a Disney film, 1961’s Greyfriars Bobby was based on a true story about a terrier who won the hearts of the townsfolk of 19th-century Edinburgh—and, after his master died, continued to guard his grave for years. Little Bobby might not be as legendary in film history as some of these other pooches, but his touching story (and, of course, general adorableness) did make a lasting impression on moviegoers. The city of Edinburgh, where the story takes place, has a statue of the real-life dog, and there was a remake of the film in 2005. However, lovers of the original were furious with its casting choice to make Bobby a West Highland terrier, not a Skye terrier. Here are some more incredible true stories about the loyalty of dogs.

The 1974 film Benji became an instant hit and launched a franchise. In it, a stray dog grows fond of a young brother and sister—and then saves them when they’re kidnapped! Its eponymous hero was a rescue dog, a mixed breed, named Higgins—and he was 14 years old! His ability to instantly convey any of several different emotions made him a movie star for the ages. The film itself was also notable for using point-of-view shots from the dog’s perspective, which helped endear Benji to the audience. And Higgins also shares a connection with another of these famous movie dogs: He appeared in a couple of episodes of the Lassie TV show!

The canine companion of Little Orphan Annie is supposed to be a shaggy street dog, which led to the choice of the six-year-old otterhound Bingo for the 1982 film starring Albert Finney and Carol Burnett. But Bingo sure didn’t live like a stray on set; according to Citizen Canine, he was treated to steak and prime rib. He also reportedly convinced director John Huston that working with animals was not the nightmare many film tycoons claimed it was. Quite the model pooch! These dog movie stars are pretty impressive but learn about 13 of the bravest dogs in history too. 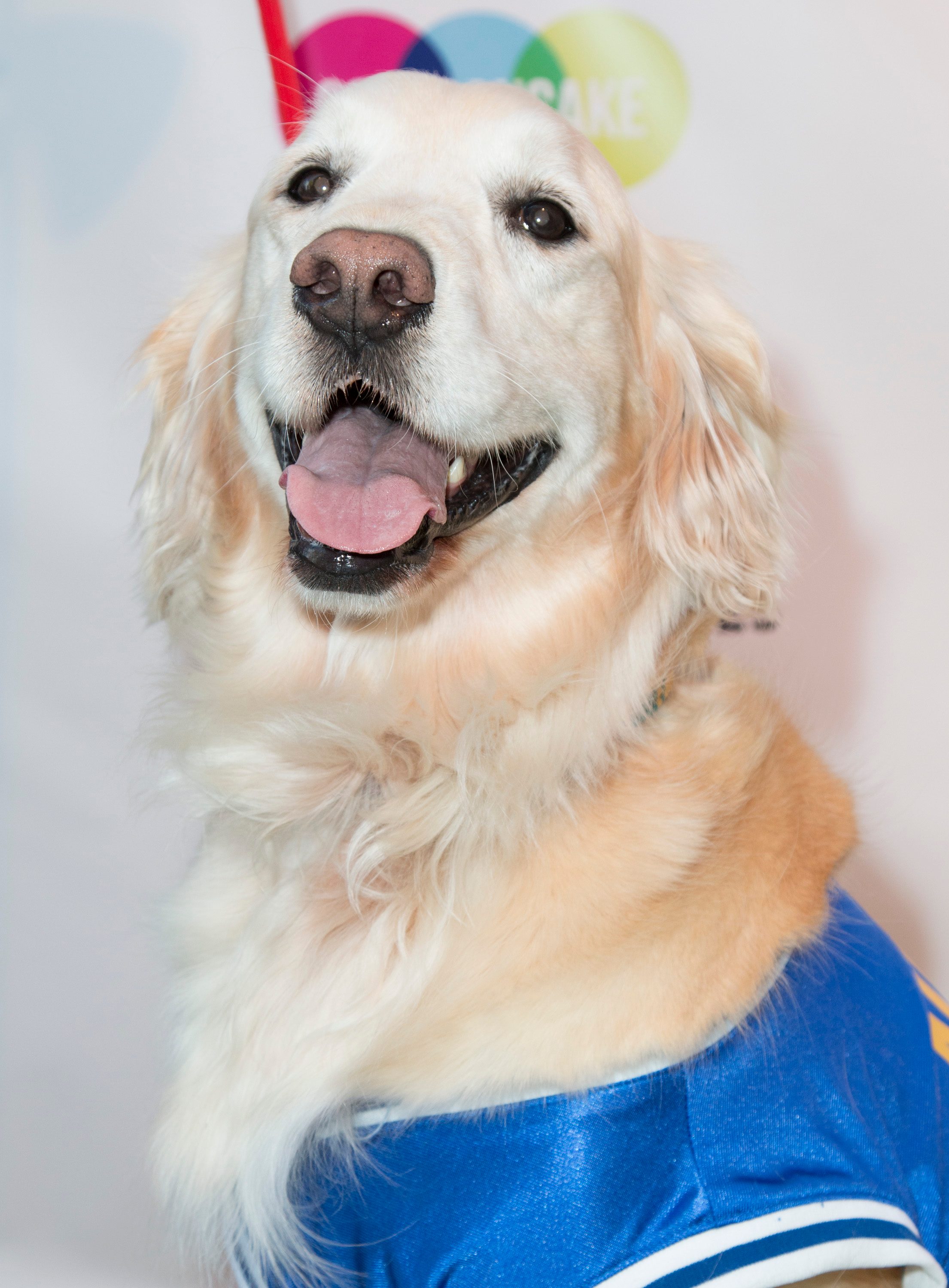 Combining dog movies with sports movies? It could’ve been a disaster—but instead was a stroke of genius that became a beloved franchise. That’s largely in part to Buddy the golden retriever—who was actually doing all of those basketball tricks! The film’s credits stated that no CGI or visual effects were used in the basketball scenes, and it was true. (The only “trick” they used was slightly deflating the basketballs and spreading them with olive oil so that Buddy could handle them better.) In fact, Buddy the dog was already fairly well-known for his sports prowess before the breakout 1997 film. His owner, Kevin DiCicco, noticed his skills while training him and brought him on the David Letterman show. Buddy even had a role on Full House before DiCicco thought of the idea for the film.

Here’s another dog movie that many dog lovers probably associate with heavily crying: 2008’s Marley & Me. Based on a memoir, Marley & Me follows a small growing family, focusing primarily on the antics of their naughty but endearing dog. Since Marley grows from a puppy to an old dog throughout the course of the film, several different dogs played him—22, to be exact! Half of them were puppies for the scenes with rambunctious young Marley. The dog who was featured most prominently in the film was a three-year-old retriever named Clyde, who was reportedly a bit of a rascal himself. His trainer, Mathilde de Cagny, even tried to get him to chew furniture to “get into character”! If you can’t get enough adorableness, read up on these fun facts about dogs you never knew.