This Is How Confusing Life Would Be Without Proper Punctuation

Punctuation can save lives, relationships, and money. 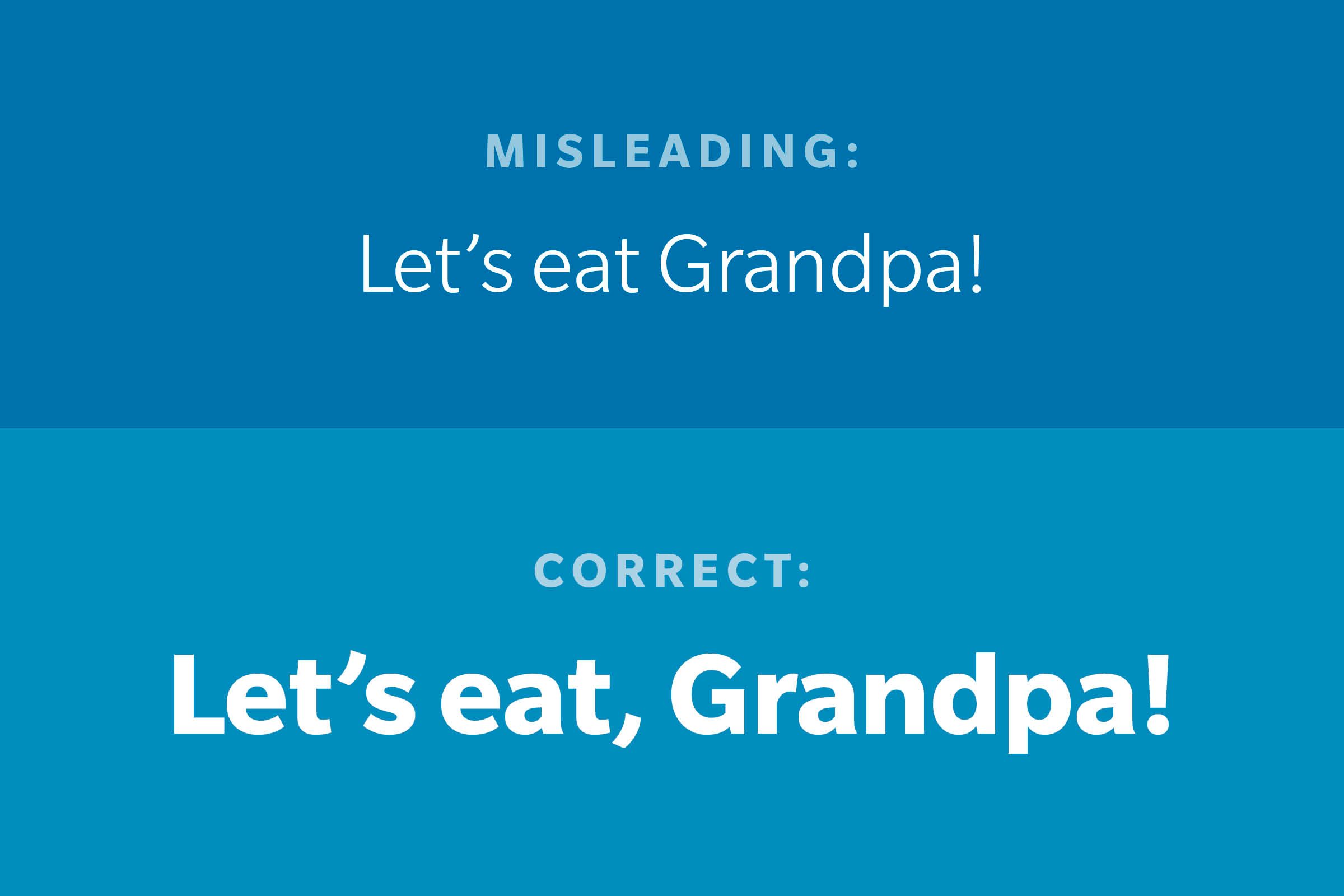 The significance of punctuation is demonstrated in the difference between announcing dinner and suggesting cannibalism. “Let’s eat, Grandpa!” vs. “Let’s eat Grandpa!” are two totally different things. For the sake of Grandpa’s life, use proper punctuation. Here are eight other examples of how confusing life would be without proper punctuation. Plus, check out these other common grammar mistakes that make smart people look bad. 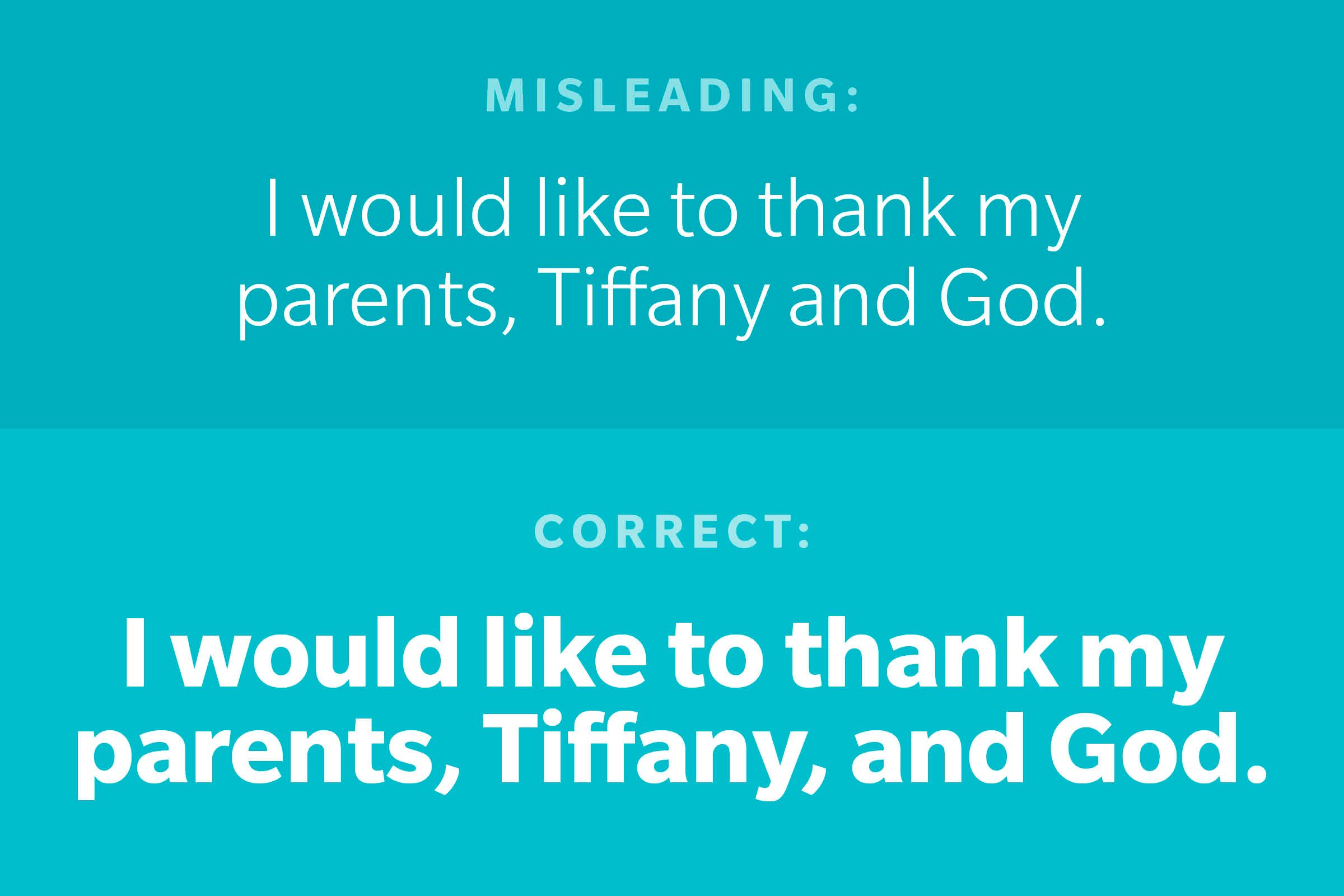 Some people love it, some people hate it, but the Oxford comma does make a difference. Let’s say you’re writing your graduation speech, and you’d like to thank your parents, Tiffany, and God. Without that comma after Tiffany, it’d read, “I’d like to thank my parents, Tiffany and God.” Are Tiffany and God your parents? Probably not. Learn more about the Oxford comma and why people can’t agree on whether to use it. 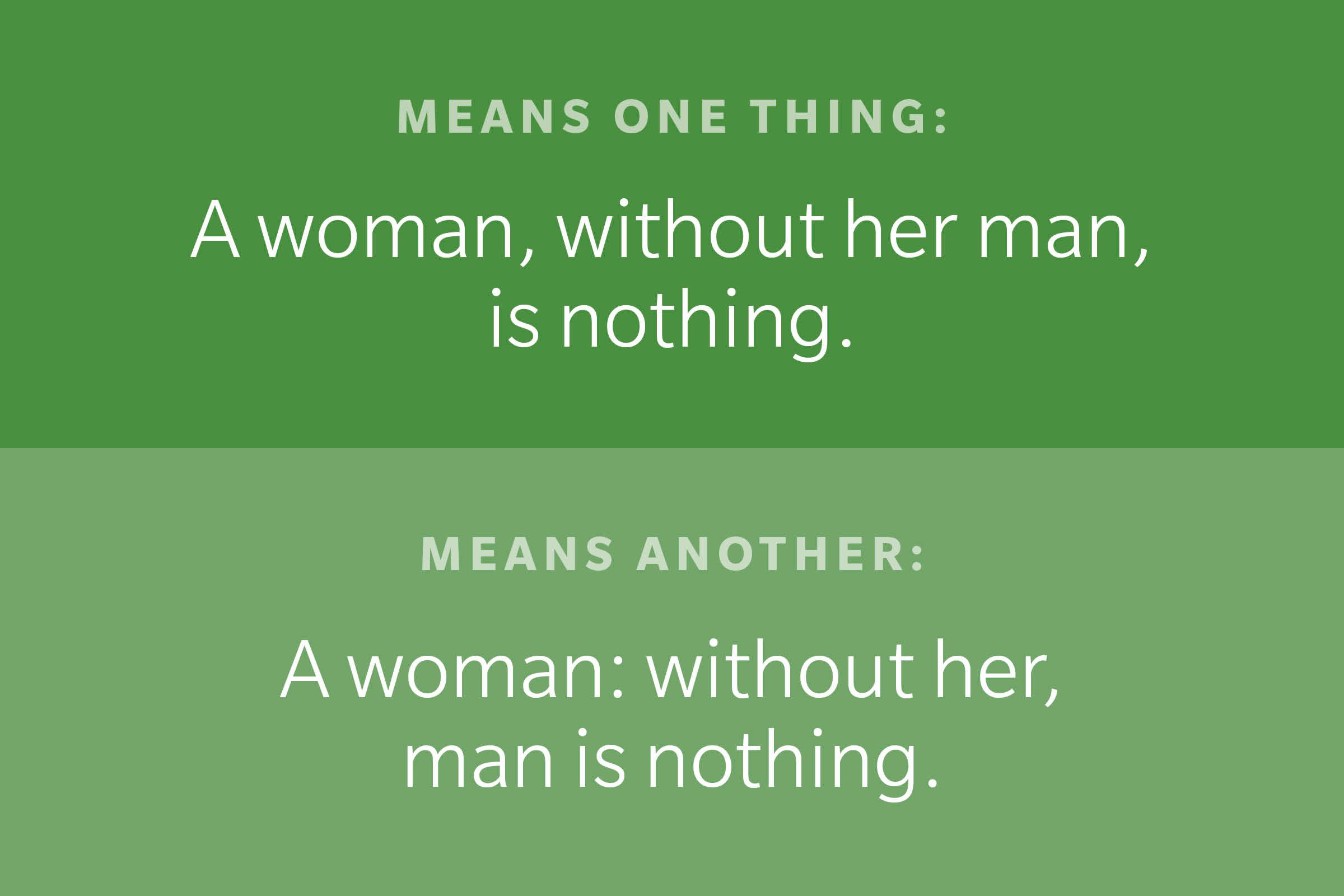 This is a big one. Depending upon where you place your comma, your sentence could convey an entirely different meaning. Like in this sentence: “A woman, without her man, is nothing.” Now, let’s change up where we’re placing the punctuation: “A woman: without her, man is nothing.” See? An entirely different sentence. Think you’re already a comma genius? Brush up on these comma rules everyone should know. 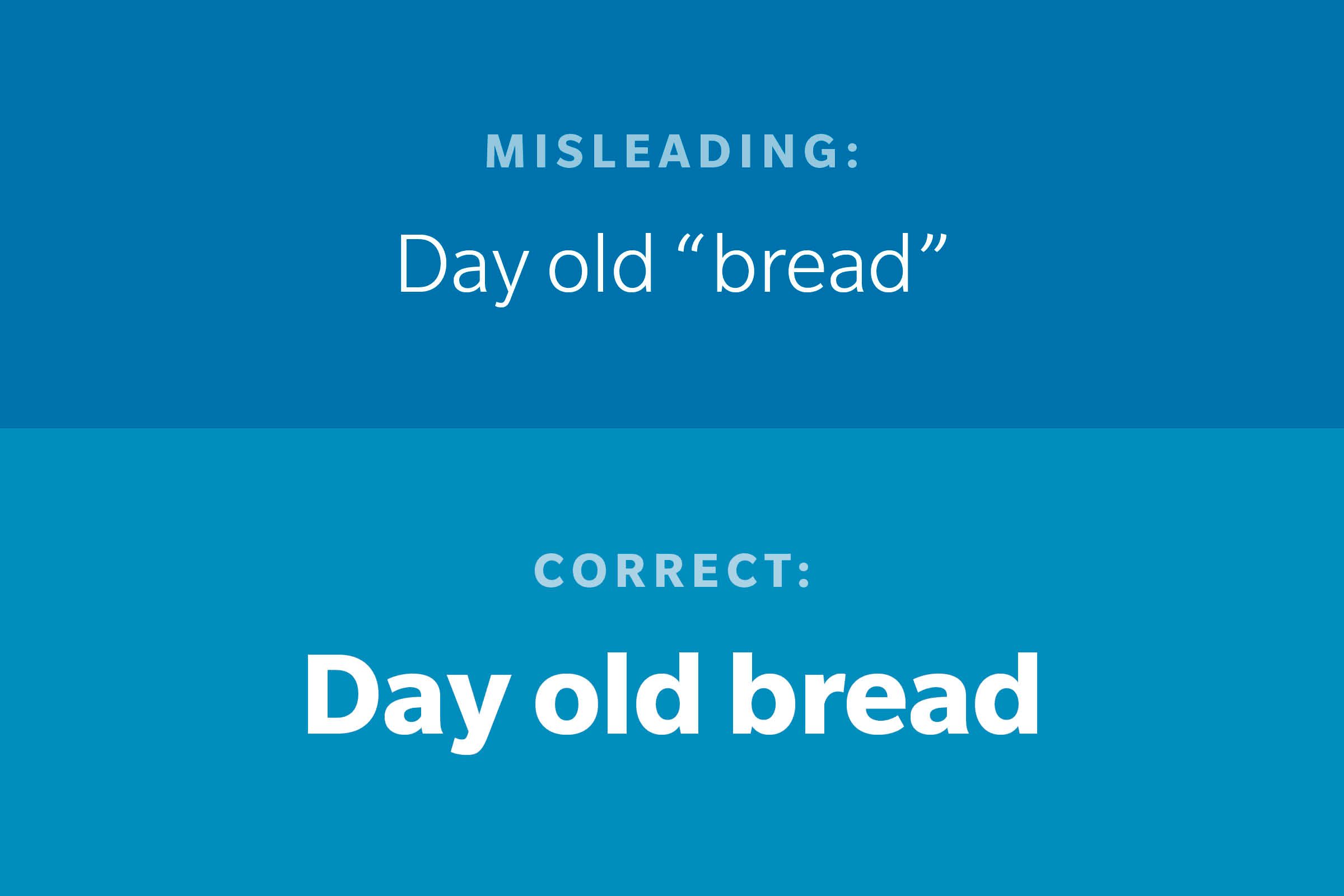 Quotation marks are primarily meant to go around quotes or a parenthetical reference. But they can also be used to suggest an alternate meaning for something. So when you see a sign in a grocery store that says “Day old ‘bread,'” it has to make you wonder…is it actually bread? Why is “bread” in quotation marks? Is it something disguised as bread? We’ll never know because of those confusing quotation marks. Here are some grammar rules from the past that we should bring back. 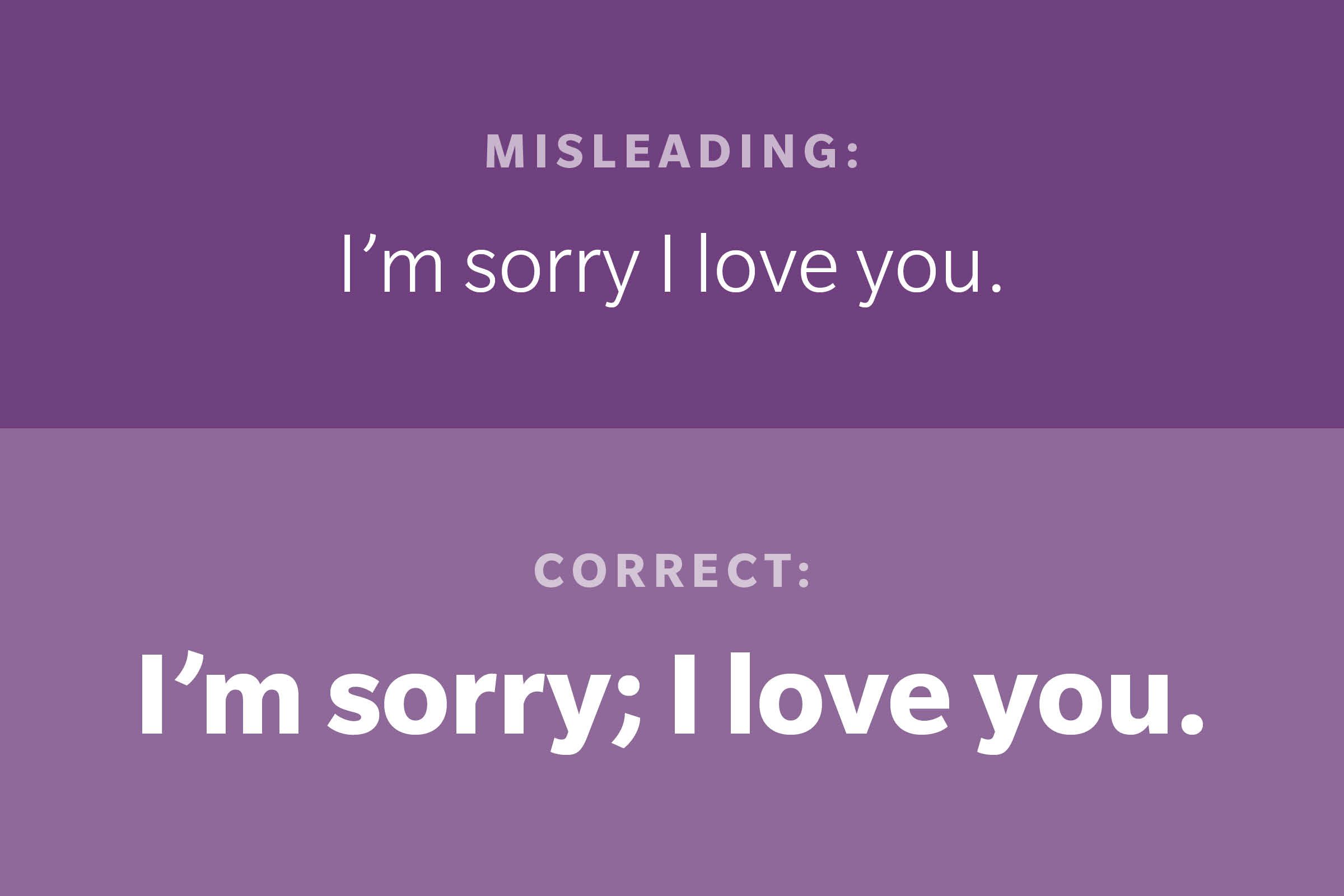 Let’s pretend that you and your significant other got into an argument, but you want to sort things out. You send them a text saying “I’m sorry; I love you,” and then all is well in the world. You’ve apologized and expressed your love for them. But if you hadn’t placed that semicolon after “sorry,” you would’ve said “I’m sorry I love you.” Hence, you’re feeling sorry that you love them. As in, you don’t want to love them. Add a semicolon, save a relationship. No one can agree on these spelling and grammar rules. 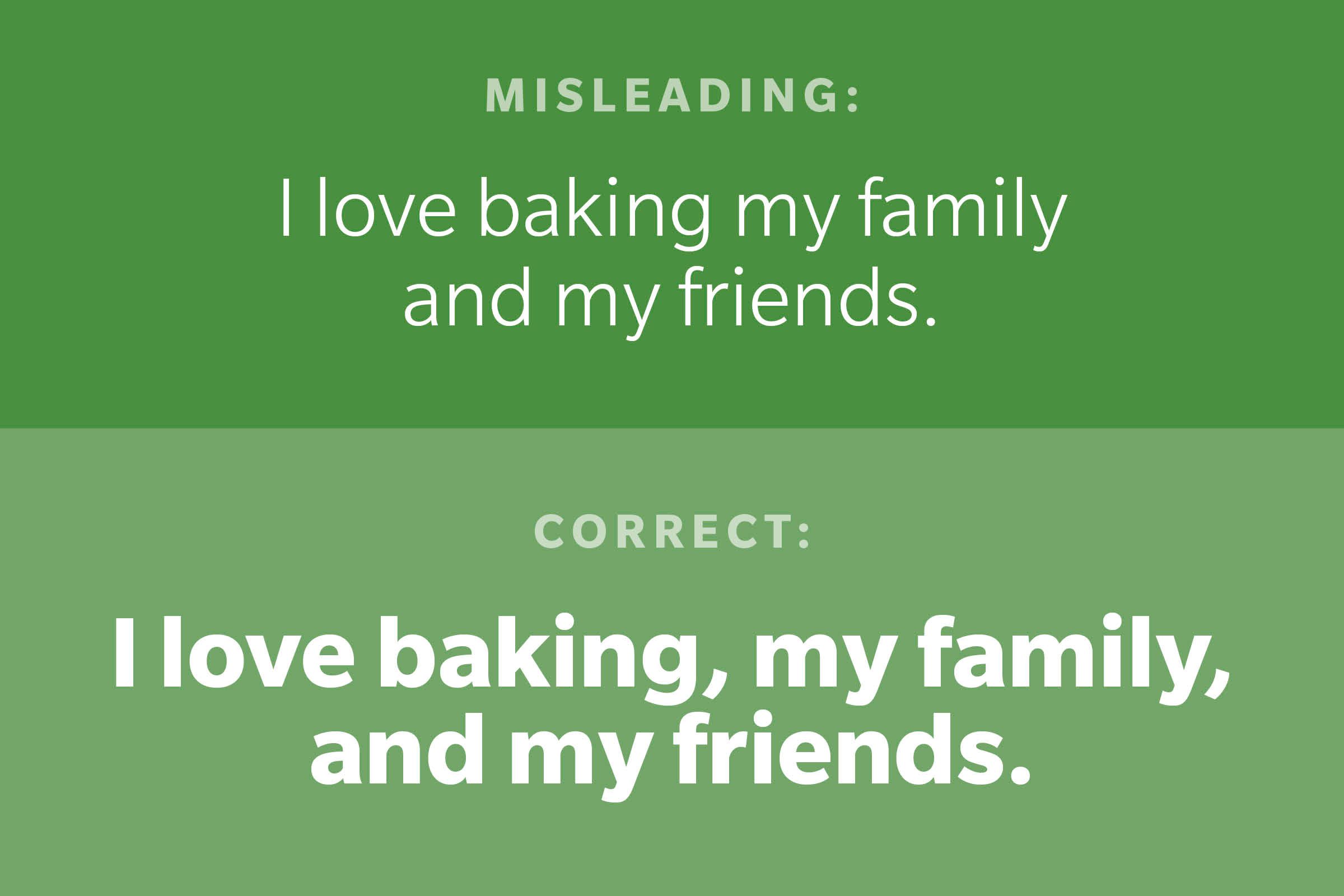 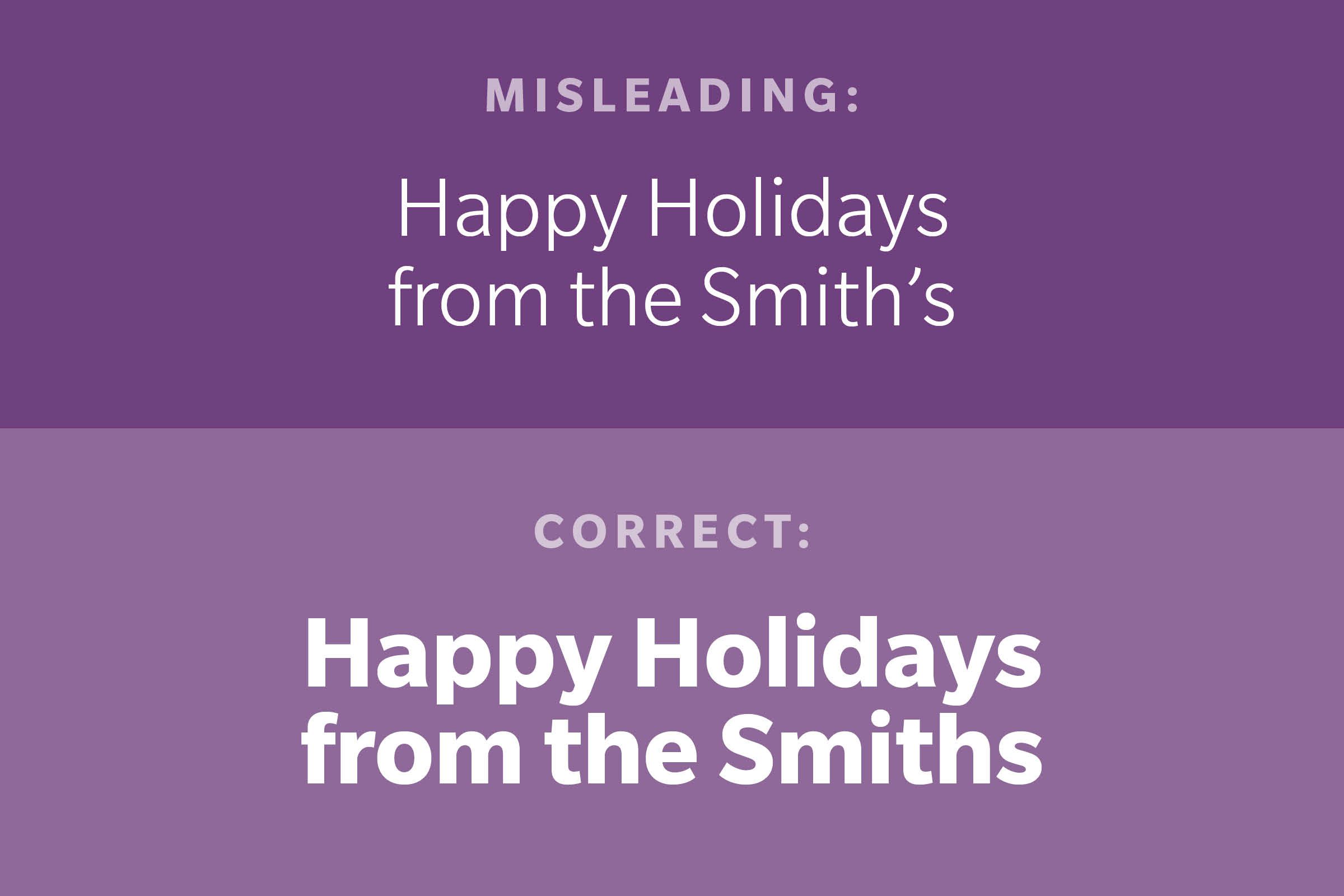 The apostrophe that’s a little too possessive

Apostrophes are used to indicate possession, or a contraction like “it’s” or “don’t,” where a letter is purposely omitted. So actually, you don’t love the “90’s,” you love the 90s. If you love the “90’s,” that would mean you love the “90 is,” which doesn’t make any sense. On that same note, your family shouldn’t be referred to as “the Smith’s” unless you move the apostrophe to the end of the name (Smiths’) to indicate that the entire family is in possession of something. “The Smith’s” means “the Smith is,” which, again, doesn’t make any sense. No apostrophe is necessary if you are plainly stating the family’s name. For more on apostrophe confusion with names, check out how to correctly pluralize a word ending in S. 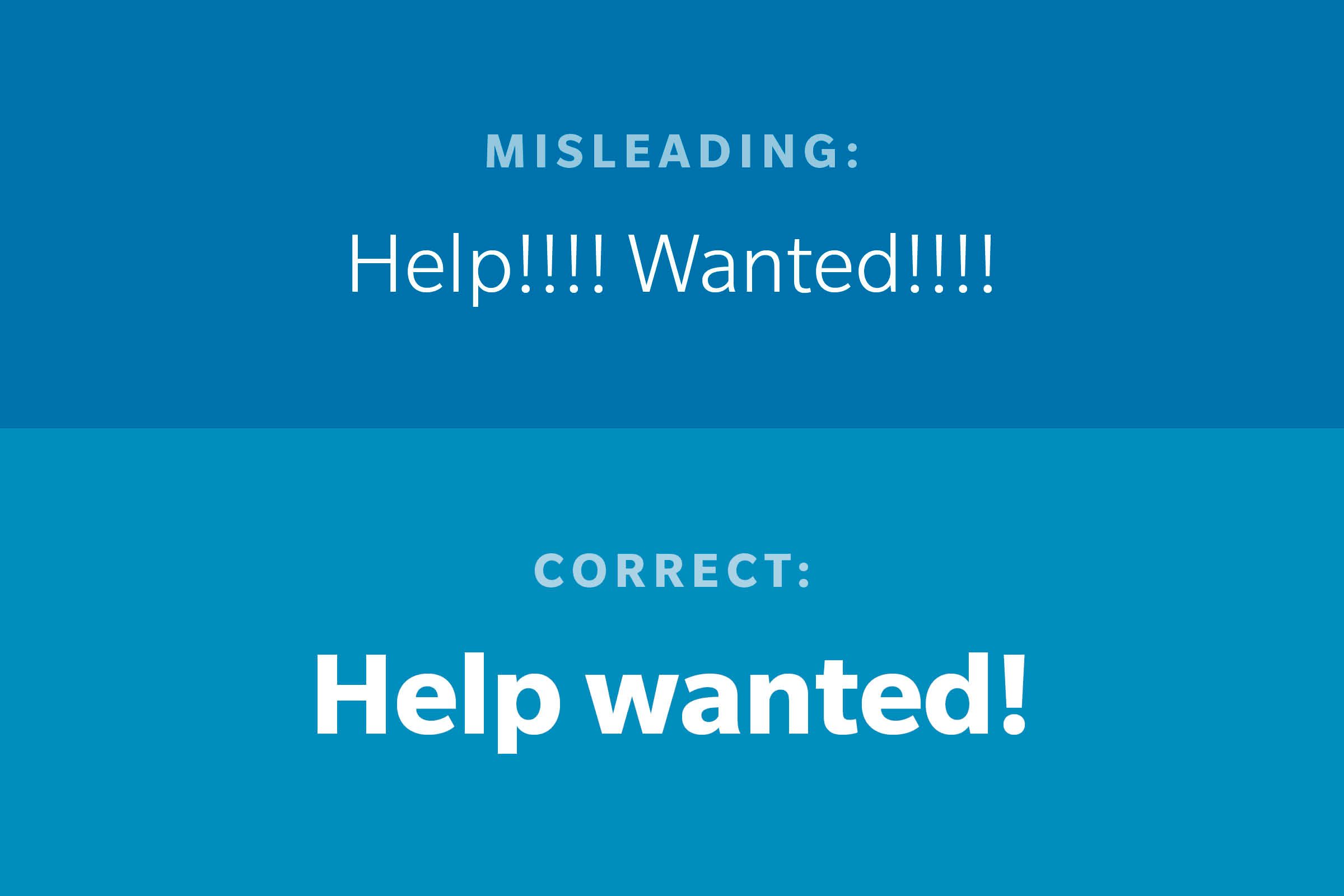 Save your excitement for when you’re actually excited

It’s tempting to use exclamation points, especially if you’re excited (or mad) about something. But sometimes it can get the wrong message across. For example, you walk into a bathroom and there’s a sign that reads, “Caution!!!! Wet!!!! Floors!!!!” In our heads, that’s typically assumed to be angry screaming; the same point would’ve come across without the excessive exclamation points. Then again, it’s possible that the person who wrote that was actually angry, but the excess exclamation points are a bit much. The same goes for excessive capitalization. These grammar rules could go extinct in the next decade. 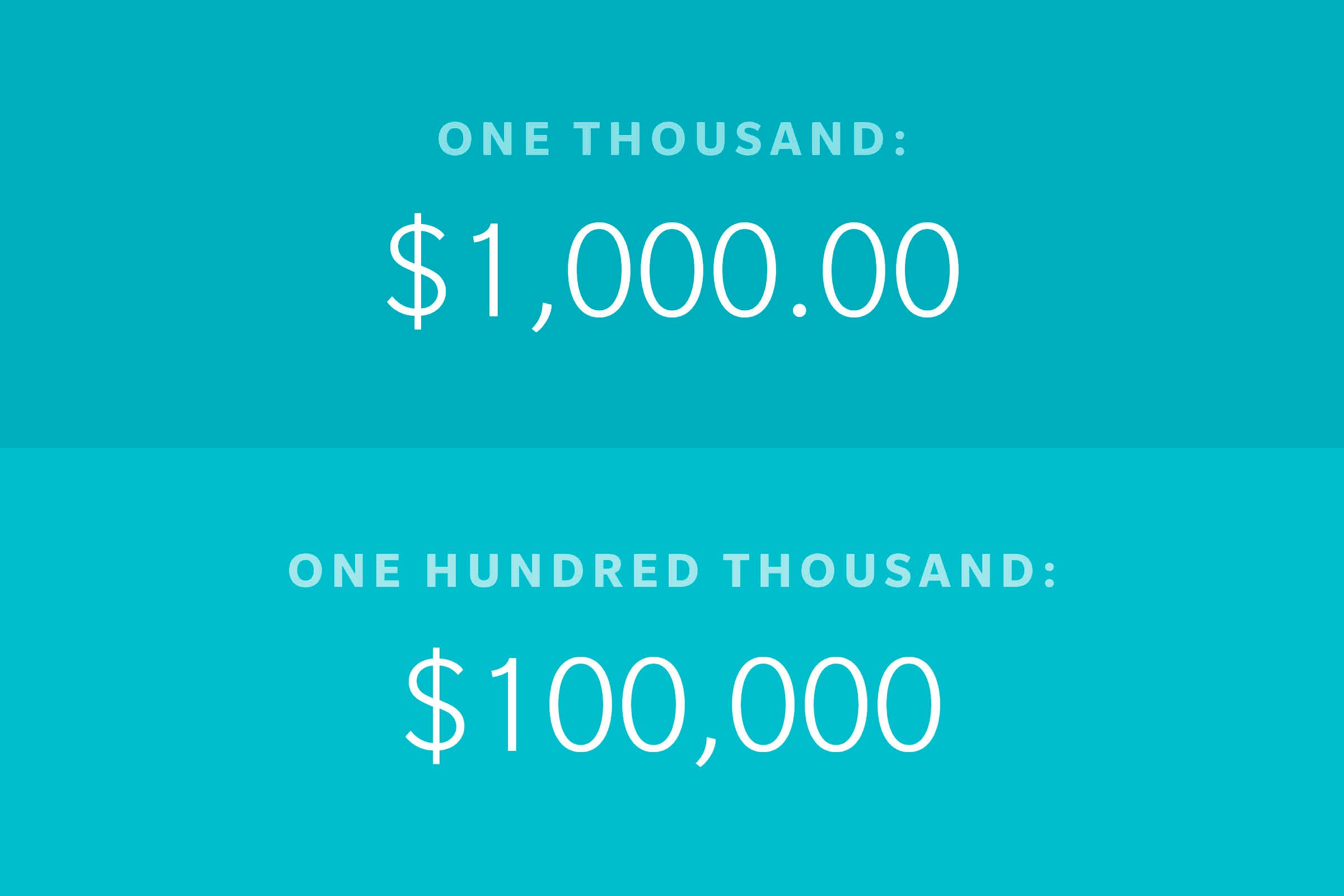 It can get your hopes up

Lastly, here’s where punctuation gets really important: when it comes to your paycheck. A simple misused comma or period could be the difference between a $1,000.00 check and a $100,000 check. And let’s be honest, that’s the one and only time we’d all like to be victims of a punctuation mistake. To make your head spin, check out the most confusing rules in the grammar world.