How Many Koalas Are Left in the World?

This year's bushfires in Australia have decimated already-vulnerable koala populations. Will they ever recover?

Koalas live in exactly one place in the world—Australia—and rely for food and shelter mostly on a single plant, eucalyptus, aka gum trees, which are poisonous to most animals but which koalas are specially adapted to consume. Only one species exists, although, as the Australian Koala Foundation points out, there is no scientific consensus on whether or not there may be two, or even three, subspecies of koala out there. But there’s one thing that’s not up for debate: Populations of these beloved marsupials (please, don’t call them bears!) were extremely vulnerable even before the 2019–’20 bushfires began to ravage their critical habitats. Luckily, there are some unaffected areas of the country still left. This is also one of the reasons you should still visit Australia.

Koala populations before the recent fires

Koalas—whose name is thought to come from an Aboriginal word meaning “no drink,” because they get so much of their fluid intake from the leaves they consume—are associated with the entire country of Australia. In truth, they only live in bushlands and forests along the southeast and eastern coastlines of the country, in New South Wales, South Australia, Queensland, and Victoria. Once, millions of the animals are thought to have inhabited these regions. In the last 20 years, though, some populations have lost as many as one in four, according to the World Wildlife Fund (WWF). These are some other animals that may be extinct after the Australia wildfires.

What’s behind the numbers

Koalas were listed as “vulnerable” by the Australian government in 2012—although some organizations believe that this designation gravely miscalculated the hardships being experienced by their wild populations. One estimate put their numbers before the bushfire season started several months ago at between 43,000 and 100,000; another, from 2016, at 329,000. The main threat to their continued existence is in line with what we’ve come to expect: loss of habitat due, in this case, to logging; the diminished nutrient value of their food because of the effects of climate change has also been implicated. Habitat loss has another, gruesome, side effect for these slow-moving mammals: It means they must spend more time on the ground, where they can be easily hunted by dogs or hit by cars, according to National Geographic.

Koalas have been impacted by this sexually transmitted disease for some time, reports National Geographic. Although not usually fatal, chlamydia causes a variety of health issues, like blindness and infertility. Female does can also pass on the infection to their joeys, who eat their mothers’ pap, a “nutrient-dense fecal matter” eaten after breastfeeding and before beginning their eucalyptus-leaf diet. Treating infected koalas with antibiotics, common protocol for the last two decades, has changed the koalas’ gut microbiomes, which has implications for their digestion of eucalyptus.

The country’s only disease-free population of koalas is located on the nature refuge Kangaroo Island in South Australia; they were brought there in the 1920s after their numbers dropped due to the fur trade. This population, which grew to 50,000 animals, held promise for future restoration efforts. But with one-third of the island currently on fire, that population has been incinerated by half. Those that survive can’t be moved off the island; they have no resistance to chlamydia. 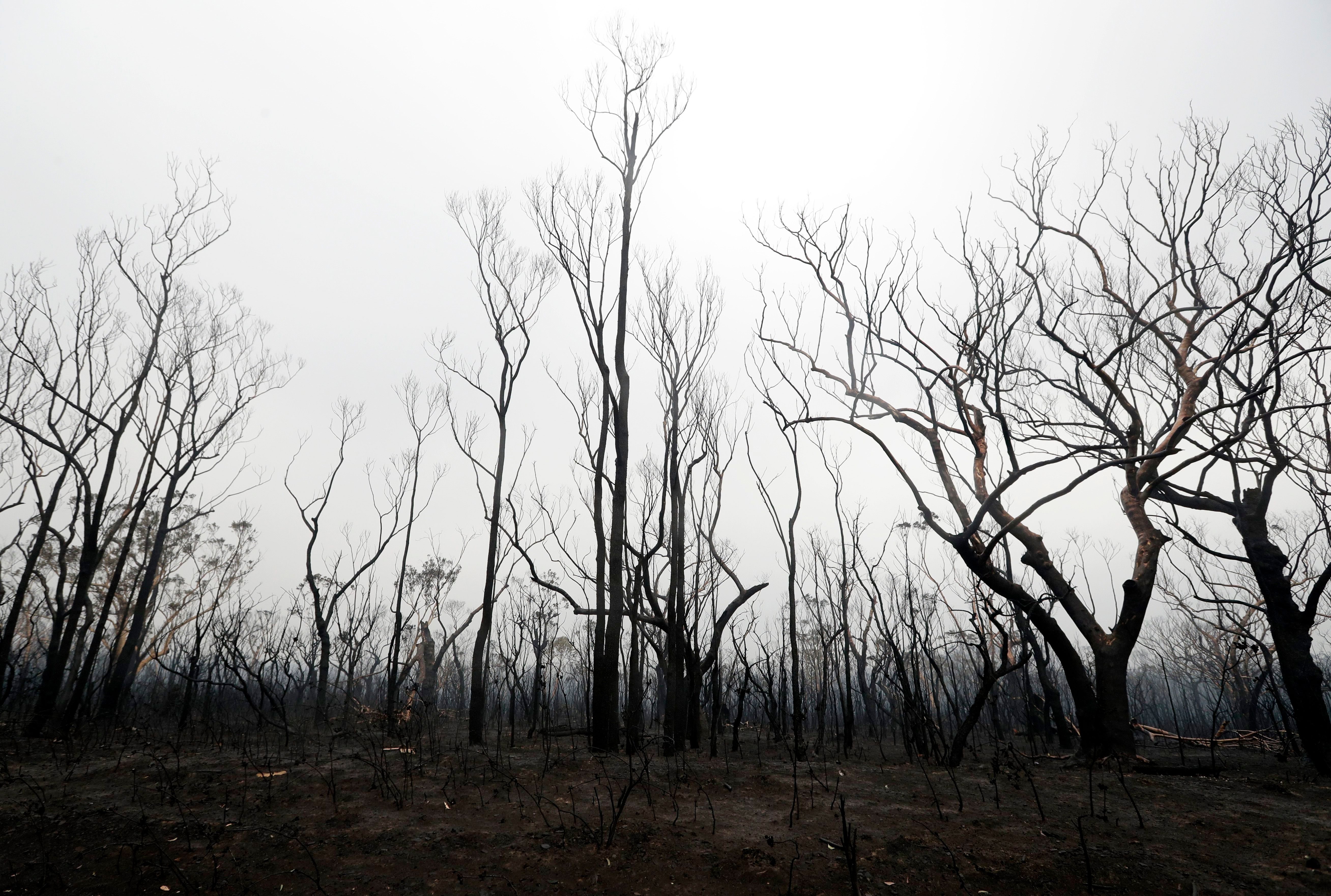 Eucalyptus trees are naturally fire-resistant and resilient. They grow back quickly after fires, and they’re tall enough that koalas seeking refuge in their highest branches are usually safe from the flames. However, the intensity of the current bushfires is such that these trees have been burning completely and, in some cases, generating sparks and explosions from the high amounts of oil they contain. This has not only created a far more fatal situation for koalas and other wildlife; it has also caused enormous tracts of landscape—32,400 square miles as of January 7, according to NBC, although the blazes continue almost unabated as of this writing—to be reduced to ashes, obliterating what would normally be at least small oases of koala habitat and food sources in between burned areas.

Wildfires may be a natural phenomenon, but human-caused climate change is making them bigger, longer-lasting, and more dangerous. Don’t miss these other things you didn’t know about wildfires.

Reports from a koala group that the bushfires had made koalas functionally extinct were quickly quelled by scientists. “What is particularly frustrating about the term ‘functional extinction’ is it indicates a population that is basically past the point of no return, so it means that nothing really can be done,” biologist Jacqueline Gill told the New York Times in late November 2019, while pointing out that such exaggerations could actually hurt conservation efforts. Yes, vast tracts of their habitat have burned; and yes, many animals have died in the current spate of bushfires; and yes, experts are all in agreement that koalas are in trouble and could one day become truly extinct. But that day is not here yet. Here are 14 animals that have gone extinct in the last 100 years. 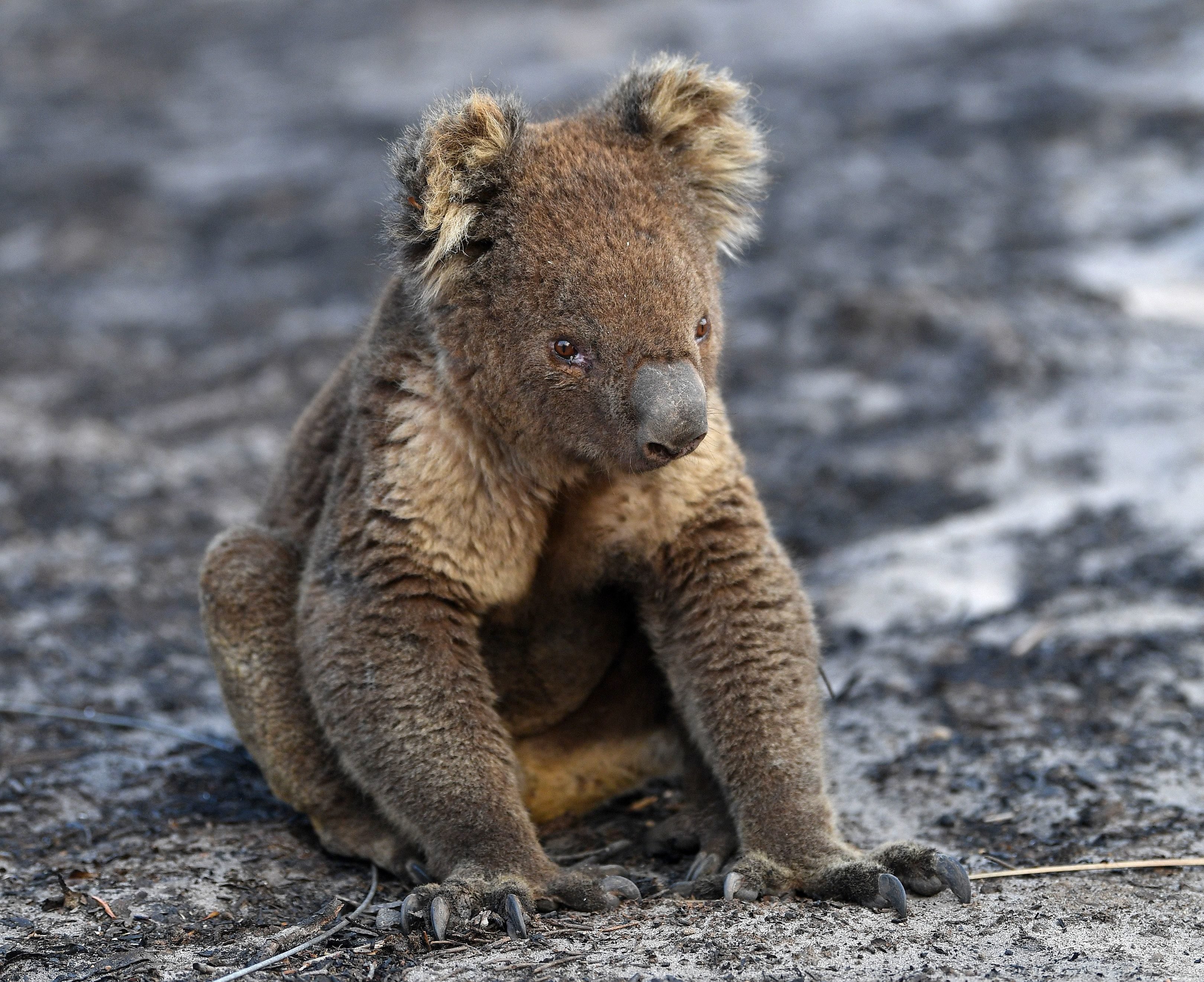 Koala populations during this year’s fires

By all accounts, estimating koala numbers is a difficult job under the best of circumstances, which is why numbers, even before the fires, varied so wildly. With the fires still raging, it’s been nearly impossible to get anything like an accurate count of any affected wildlife species; a current rough estimate of 1.25 billion animals dead is being floated. WWF Australia estimates that at least 8,400 of those deceased animals are koalas and points out that those numbers are likely to rise as the fires persist. Rescue efforts are ongoing, and highly necessary heartwarming stories continue to appear, like this one from CNN about koala rescue dogs. But the devastation is high—and it will only get higher. In addition to their devastating effects on koalas and other wildlife, this is what the Australian bushfires mean for the rest of the world.

WWF-Australia has established the Australian Wildlife and Nature Recovery Fund, with a goal of raising AUS $30 million to respond to the damage caused by the bushfires and begin to assist in recovery, work to restore forest habitat, and find solutions that will lessen fire impacts in the future. You can donate here. Other worthy organizations on the ground that could use your support: the wildlife rescue organization Australia Zoo Wildlife Hospital; the Koala Hospital in Port Macquarie NSW; the Royal Society for the Prevention of Cruelty to Animals Victoria; and the Wildlife Information, Rescue and Education Service. These efforts can truly make a difference. Just look at these 16 incredible animals that came back from the brink of extinction.