Learn how heart attacks and onion snacks led to one of the chain's best-selling items of all time.

McDonald’s chicken nuggets debuted in 1983, and diners have been clamoring for them ever since. Not even Olympic athletes can resist the allure of these battered, deep-fried morsels. During the 2008 Summer Olympics in Beijing, gold medalist Usain Bolt estimates he ate 1,000 chicken nuggets (for breakfast, lunch, and dinner) during his ten-day stay because his stomach couldn’t handle traditional Chinese food.

And in May 2021, McDonald’s chicken nuggets were part of a special BTS Meal, a collaboration with the K-pop megastars that coincided with the release of the group’s single “Butter.” Diners were able to order the BTS Meal—with new Sweet Chili and Cajun dipping sauces—in U.S. locations (including this unique Sedona McDonald’s) as well as in ten other countries.

In honor of the Mickey D’s meal that gets almost as much love as the classic McDonald’s apple pie, we’re serving up some food facts trivia about one of McDonald’s best-selling items of all time.

They were the solution to McDonald’s red meat problem

In the ’50s and ’60s, more Americans than ever were suffering from heart attacks, and doctors began to suspect saturated fats and red meat (like hamburgers) were at least partly to blame. But it wasn’t until 1977 that the government released its dietary goals, urging Americans to eat less red meat. Bad news for a burger joint like McDonald’s, whose most popular menu item was now reportedly killing people.

To bring back consumers, the fast food chain started working on chicken items to round out its beef-forward menu, according to Time. The result: McDonald’s chicken nuggets. And who better to formulate a recipe for the world’s biggest fast-food chain than someone with royal experience? To help with McDonald’s menu change, the company called on Rene Arend, a Luxembourg-born chef whose resume included making dinner for Queen Elizabeth II and the king of Belgium.

Even a chef with those credentials couldn’t be expected to create the perfect recipe on his first shot, however. His initial idea was a deep-fried chicken pot pie, but it failed in testing. The team also tried fried chicken but couldn’t drum up enough excitement with restaurants like KFC dominating the market. At that point, McDonald’s almost gave up on its idea of entering the poultry arena.

They were almost an onion nugget

Since things weren’t going so well with poultry, McDonald’s CEO Ray Kroc asked Arend to focus on a bite-sized onion ring—an onion nugget, if you will—which he had much better success with. Those hit the market in the 1970s, but McDonald’s chairman of the board, Fred Turner, really had his heart set on a chicken item. “Why not a chicken nugget?” he reportedly said to Arend when he bumped into him in the hallway at headquarters one morning.

Inspired, Arend went back to the kitchen, cut up some chicken, breaded it, and threw it into the fryer. The result was blissful, and McDonald’s chicken nuggets as we know them were born. As for that onion nugget, well, it just couldn’t compete. The failed McDonald’s item was eventually pulled off the menu.

McDonald’s chicken nuggets did, however, inspire another popular menu item: the McRib sandwich. In a 2009 interview, Arend said that when fast-food chain first introduced the nuggets, they were such hot sellers that every franchise wanted to get their hands on them. At that point, McDonald’s couldn’t keep up with the demand, so the chef created the McRib to give other franchises a new menu item—without requiring the low-supply chicken. 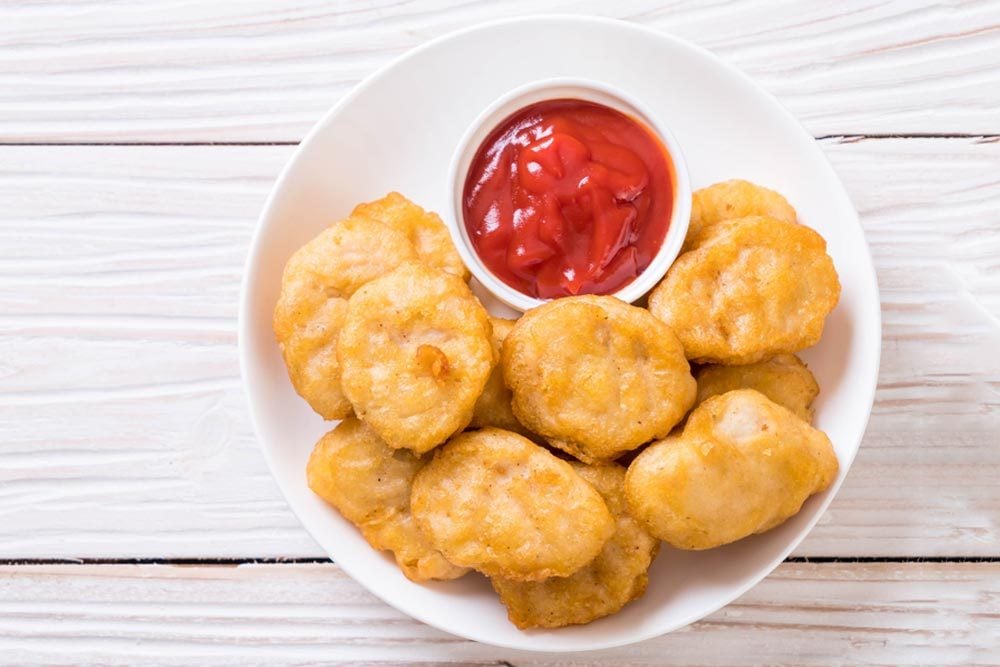 If you’ve ever looked at McDonald’s chicken nuggets before gobbling them up, you may have noticed that they aren’t all identical. But you probably didn’t realize there are four distinct shapes. And, no, this isn’t the stuff of secret menus. They’re right out there in the open, and they even have names. The “ball” is round, the “bone” looks like a rounded rectangle, the “boot” has an edge jutting out, and the “bell” is diamond-like.

The shapes came about when McDonald’s partnered with Tyson Foods to keep up with the demand for poultry. The chicken meat in a nugget is ground and then seasoned and mixed before being pressed into a mold in one of the four aforementioned shapes. The process allows the nuggets to cook evenly (and makes them more fun to eat). 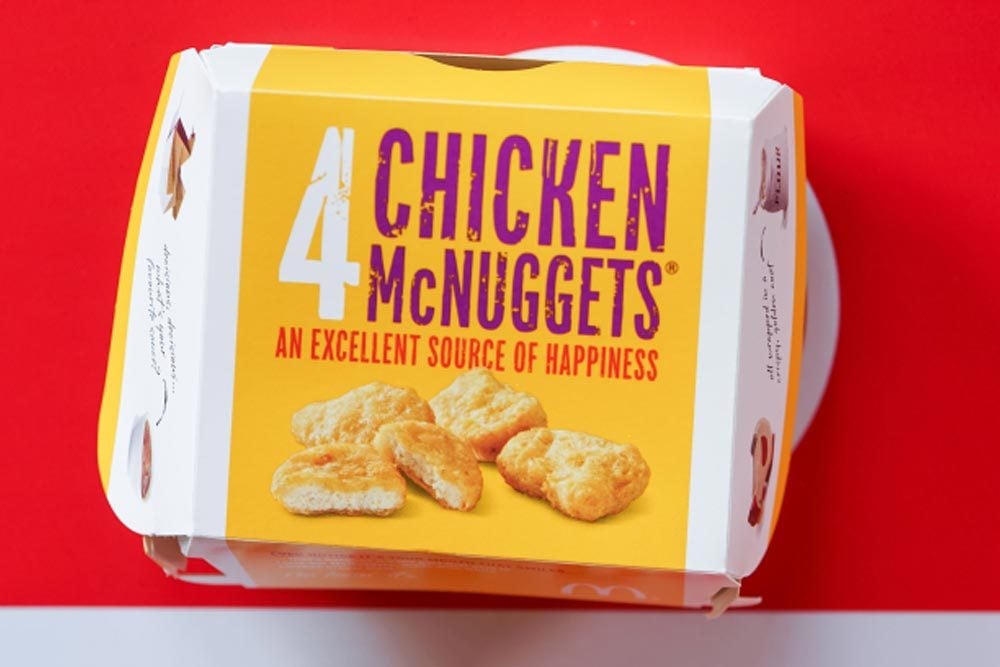 In 2012, a viral video of “pink slime” alerted the public to the existence of lean, finely textured beef that many meat suppliers add to burger patties. It looks like pink goo and is treated with ammonia hydroxide, which, while entirely safe to eat, did not sit well with the public.

McDonald’s denounced the video, claiming that it was not a picture of the restaurant’s food. But after customers demanded that they remove the stuff from their burgers, the chain stopped using ammonia in all of its products. So while the inside of a chicken nugget may look gooey during production—thanks to the process of grinding the meat into a paste-like substance that can be molded into shapes—it does not contain ammonia.

You’ll be happy to know that McDonald’s chicken nuggets are made with USDA-inspected, boneless white-meat chicken, cut from the chicken breast, tenderloins, and rib meat, according to the chain. The company is transparent about its ingredients, listing them right on its website. Along with white-meat chicken, the nuggets contain water, flour, corn flour, vitamins, starches, lemon juice solids, and several different kinds of oil.

A four-piece box of McDonald’s chicken nuggets clocks in at 170 calories, while a 40-piece box has a whopping 1,770 calories. But considering the amount of food you’re getting, that’s not too far off from other menu items. Here’s a noteworthy McDonald’s fact: Eating just one Double Bacon Smokehouse Burger will give you 1,130-calories. To put less of a dent in your daily caloric intake, opt for 6-, 10-, or 20-piece Chicken McNuggets—and skip the McDonald’s Coke!

You can order a spicy version—sometimes

In September 2020, McDonald’s introduced Spicy Chicken Nuggets, coated in a tempura batter made with cayenne and chili peppers. It was the first time McDonald’s introduced a new chicken nugget flavor since the food’s debut in 1983. They were served with mighty hot sauce, a new dipping sauce made from crushed red peppers and chilies that became the spiciest McDonald’s dipping sauces thus far. To cool customers’ taste buds, the chain simultaneously released a new McFlurry flavor: Chips Ahoy, complete with caramel topping and bits of Chips Ahoy cookies blended throughout.

McDonald’s spicy nuggets were originally available for a limited time, but they were so popular (tens of thousands of Tweets were dedicated to their deliciousness), the company decided to bring them back for another limited run in February 2021. Alas, the spicy nuggets have yet to appear on U.S. menus this year.

There may be hope for another U.S. chicken nugget release, though. In January 2022, the chain began selling a version of its new Peppercorn Garlic Spicy McNuggets in retail locations in Japan, complete with two limited-time dipping sauces, Garlic Soy Sauce Mayo and Smoked Cheese. American customers are hoping they’ll do the same stateside.

In August 2016, McDonald’s announced that it would be removing artificial preservatives from its chicken nuggets, which also don’t contain artificial colors or flavors, and the oil the nuggets are fried in. The move was part of the chain’s commitment to being more transparent about what’s in its food.

In that vein, the company also cleaned up the ingredients list, ditching citric acid, chicken skin, and safflower oil, according to Becca Hary, a spokeswoman for the chain. Since 2016, McDonald’s has been using pea starch and rice starch, but the swaps reportedly don’t affect the taste of the nuggets. The company also made a commitment to use chicken that wasn’t “treated with antibiotics important to human medicine” by March 2017. Not only did McDonald’s fulfill this promise, but it did so in July 2016, nearly a year ahead of schedule.

The meal may not be winning you any points when it comes to a healthful diet, but the 2016 changes can help you can feel slightly better about scarfing down a 10-piece Chicken McNuggets, McDonald’s fries, and McDonald’s Sprite.

The dipping sauces have changed

One of the best parts about eating McDonald’s chicken nuggets is dipping them in a fun sauce. Right now, you can enjoy yours with Tangy Barbecue, Spicy Buffalo, Creamy Ranch, Honey Mustard, Honey, or Sweet ‘n’ Sour sauces.

Back in the day, you might have preferred pairing yours with discontinued options like Szechuan Teriyaki (in honor of Disney’s Mulan), Mesquite Barbecue, or Zesty Italian—all discontinued options you won’t find in McDonald’s anymore. And don’t forget the limited-time dips: Mighty Hot Sauce to go with McDonald’s spicy nuggets, Garlic Soy Sauce Mayo and Smoked Cheese to go with the Japanese Peppercorn Garlic Spicy McNuggets, and the Sweet Chili and Cajun dipping sauces with the BTS Meal.