Cook the perfect steak every time by avoiding these common mistakes. 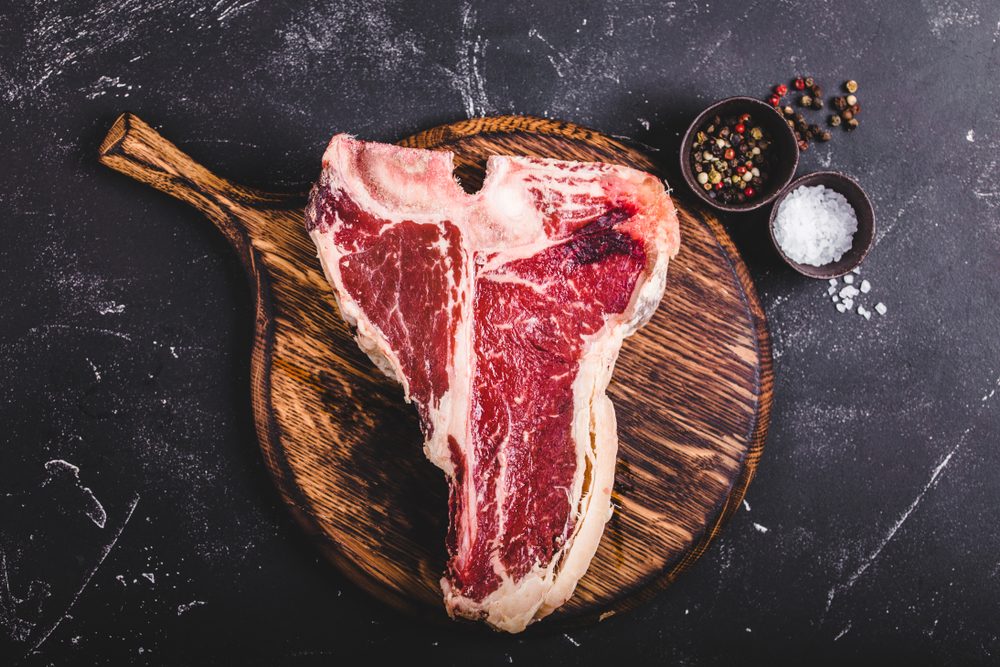 You may be afraid of making steak too salty or overpowering it with spices, but trust us: Caution doesn’t pay when it comes to seasoning. Since you can’t season the steak’s interior, playing it too safe will deprive you of rich flavors and a bold crust.

What to do instead: Season the meat heartily on both sides about 35 to 40 minutes before cooking. Another mistake? Not knowing how to grill each specific cut of meat. Here’s how to grill (almost) every single cut of meat. 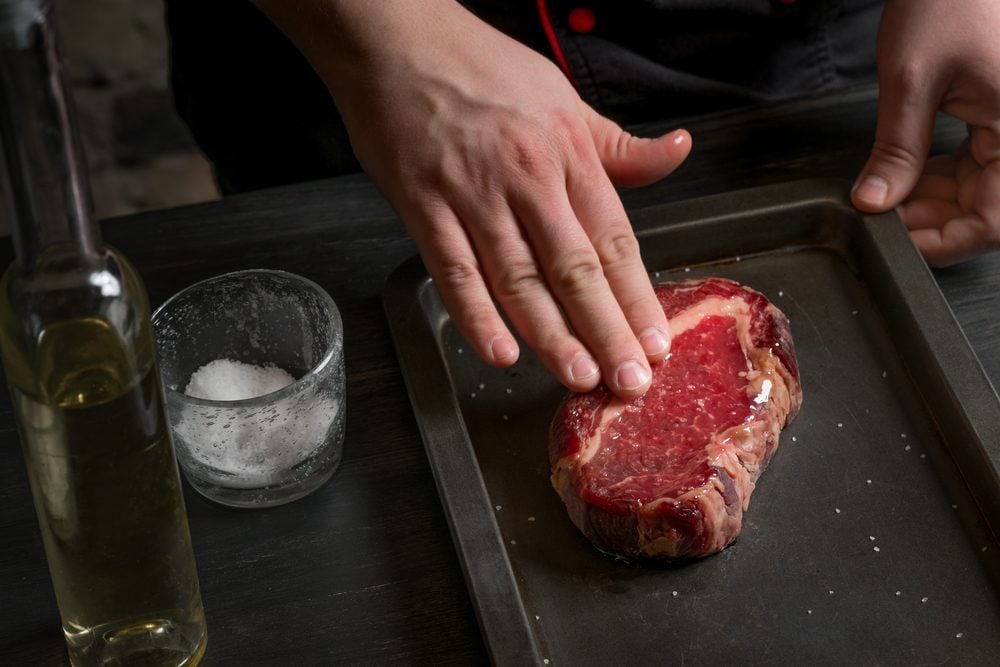 When it comes to steak, it can be hard to be patient, but you never want to pull steak straight from the fridge to throw on the grill. Plan ahead, giving the meat time to reach room temperature. A cold steak will cook unevenly, potentially causing the outside to burn while the inside remains undercooked.

What to do instead: Depending on the cut, allow a half-hour to two hours for the meat to sit on the counter. Also, learn about these surprising grilling facts you’ve probably never heard before. 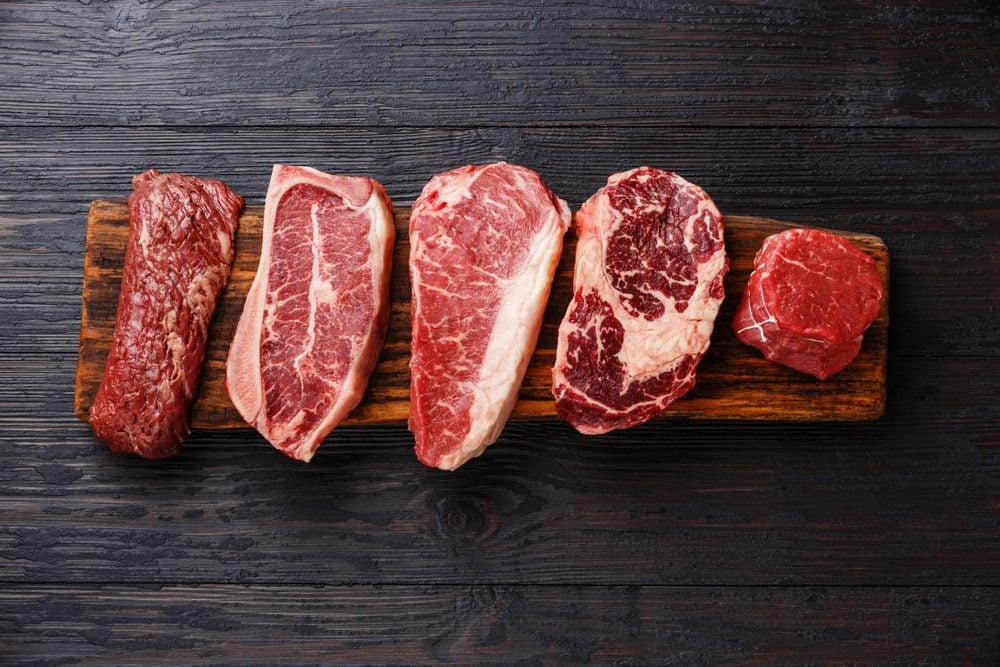 Mistake 3: Getting the wrong cut

Choosing a steak isn’t as easy as grabbing it from the cooler and heading to the checkout line. There are plenty of varieties, and not all of them should be cooked the same way. For instance, T-bones thrive on the grill, but a boneless ribeye does best in a frying pan (thanks to the fat running through it). Treating all steaks the same can deprive you of the best possible flavor.

What to do instead: Learn your cuts and preferred cooking style. If you forget which cut you like, remember that the higher the price point, the more likely it’s meant to be fried. (Any good butcher will be happy to provide answers and advice!) Don’t miss these 7 tips for grilling juicy steaks (and burgers!)

There’s a time and place for lean cuts, but steak night isn’t one of them. Lean cuts tend to be tough and dry since fat is what provides most of the flavor.

What to do instead: Pick out a steak with a healthy amount of marbling (the fat which shows up as white flecks and lines). It may be more expensive, but the tenderness and juiciness will be well worth it. 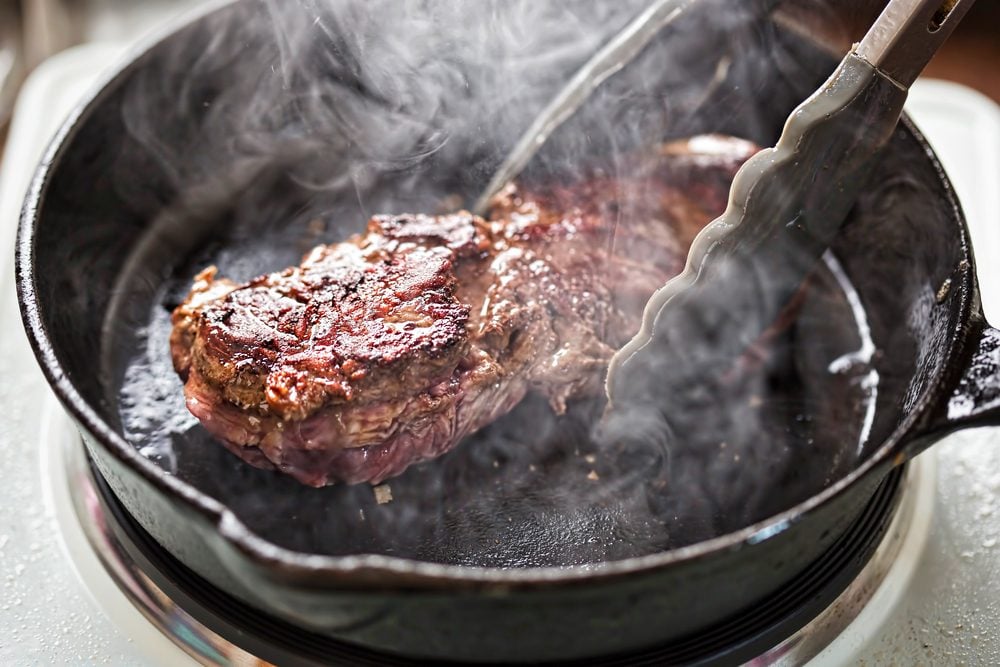 Mistake 5: Turning the steak only once

It’s a common misconception that the best way to keep a steak tender and juicy is to flip it once. While you may get photo-worthy grill marks, your steak won’t be any more delicious. In fact, with this method, you may be drying out the steak. There’s another surprising reason you actually don’t want to have a steak with grill marks.

What to do instead: Get into the habit of turning your steak multiple times as it cooks, especially when the heat is high. Extra flips allow the steak to cook more quickly (up to 30% faster than the one-flip method.) This is what will give you a juicier steak. You’ll also find that this method helps the meat cook evenly, without much curling along the edges.

Test Kitchen tip: It’s essential to use tongs instead of a fork to flip your meat. 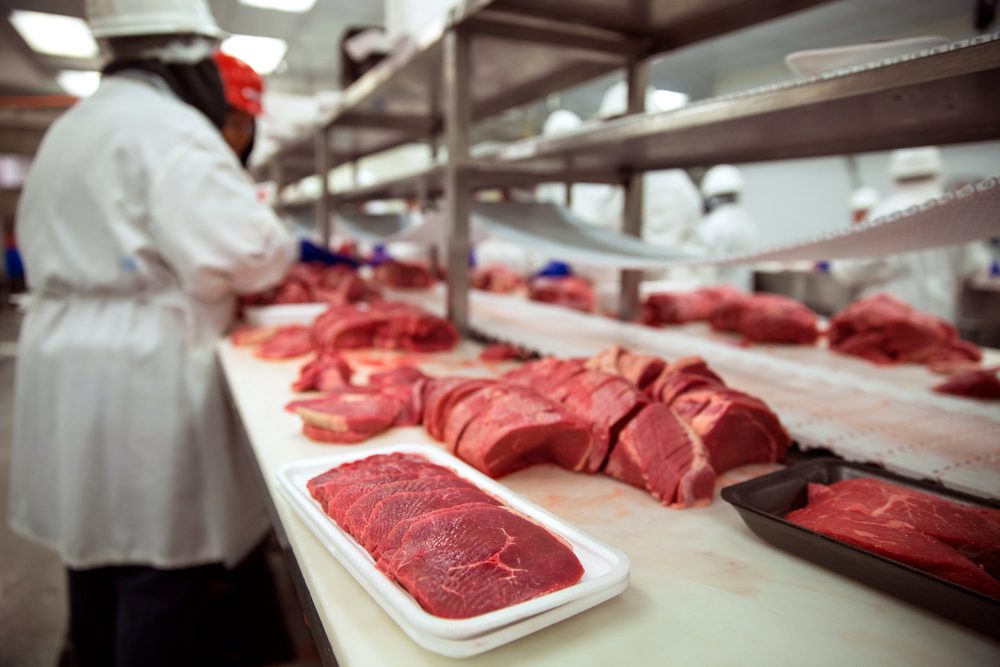 Mistake 6: Sticking to the supermarket selection

It makes sense to purchase meat with the rest of your groceries, but if you want to cook a knockout steak, go the extra mile. To cook like a pro, trust a pro to help get you started.

What to do instead: Head to a local butcher. They’ll be able to help you figure out the best cut and introduce you to lesser-known options. A butcher will also be able to answer any cooking questions you have and offer their own suggestions. 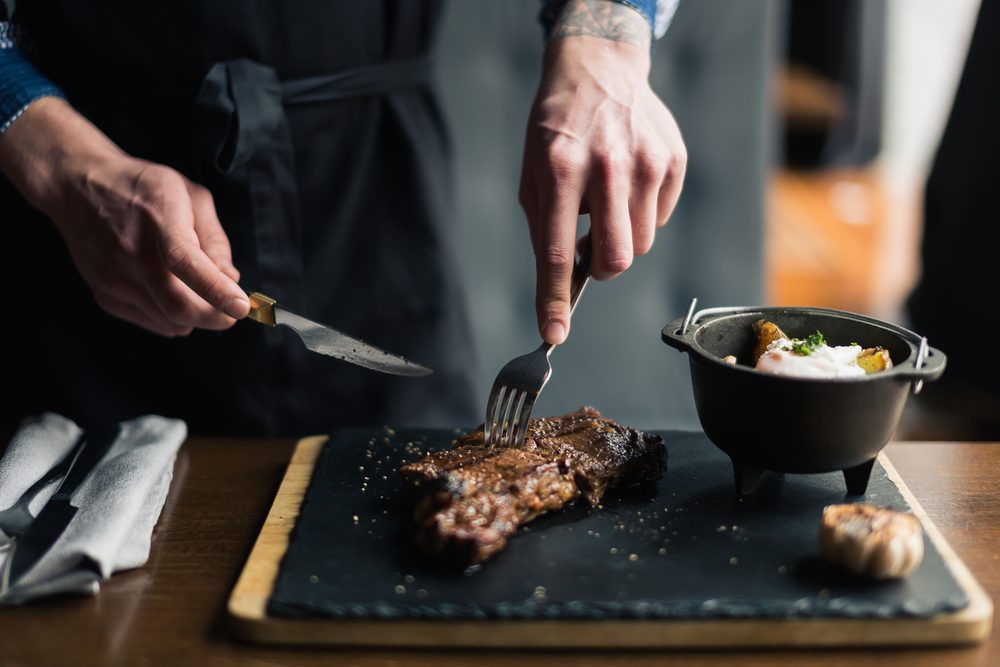 Mistake 7: Cutting into it too soon


A freshly cooked steak is almost too tempting but resist the urge to dig into it right away. Like lots of other foods, steak needs time to relax, as do the fibers within it. While the meat cooks, its fibers shrink, emitting moisture and making the steak juicy. Cutting into the meat right away will cause that hard-earned moisture to spill out onto the plate, leaving a drier, less flavorful dinner.

What to do instead: Cover the meat in foil and let it rest after cooking-five minutes for thinner cuts and up to 15 minutes for heartier pieces. The fibers will then have time to expand and reabsorb the juices. Here’s how you can fix other common cooking disasters. 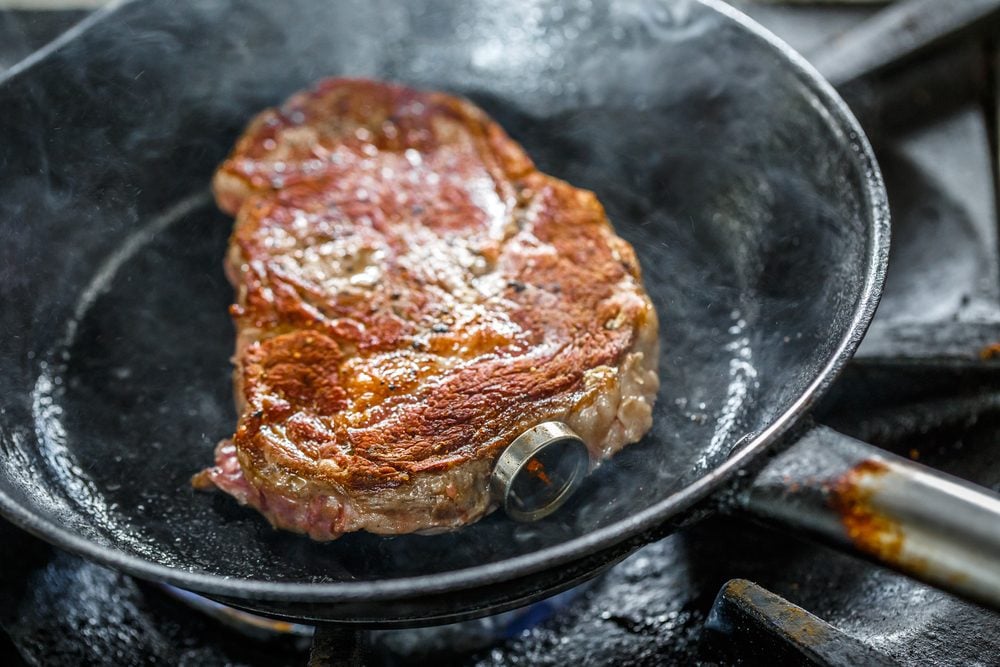 Mistake 8: Skimping on a meat thermometer

No matter how expert your grilling skills, you probably can’t accurately tell when a steak is ready simply by looking at it. Visual cues can be deceiving: The exterior may look tantalizing while the inside is still too raw. If you tend to test how it’s progressing by poking it with a fork, you’re releasing some of those flavors and juices that make the meat delicious.

What to do instead: Wielding a trusty thermometer, aim for internal temperatures of 135 degrees, 140 degrees, and 145 degrees for medium-rare, medium, and medium-well steaks, respectively. (P.S. If these temperatures are lower than you’re used to, it’s because we’re factoring in a process called “carryover cooking.” Once the steak is removed from the grill, its internal temperature will rise several degrees as it rests.) 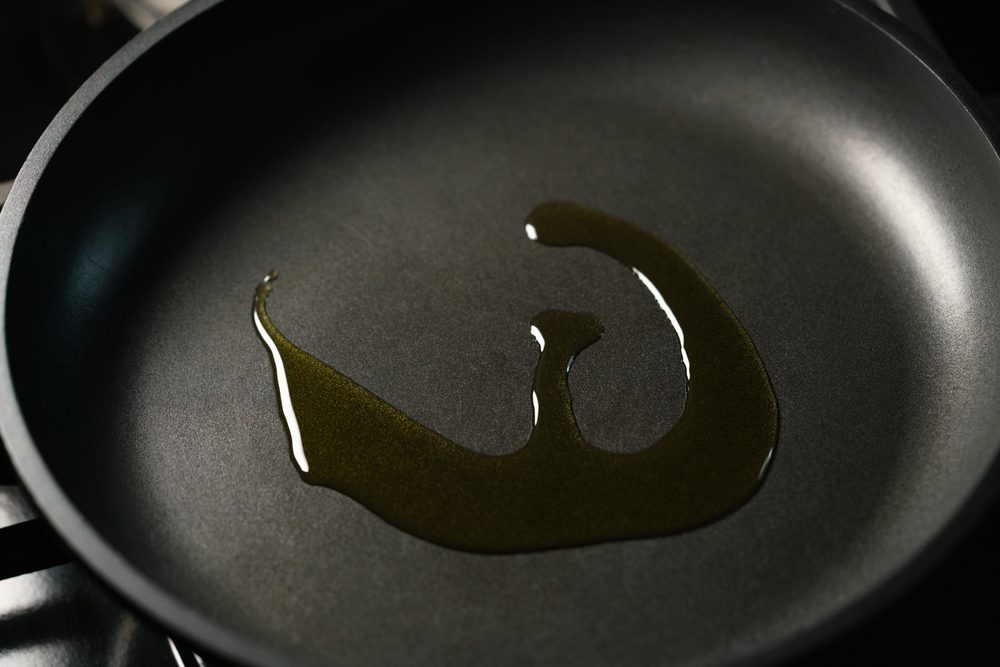 Mistake 9: Using an oil with a low smoke point

Extra virgin olive oil is lauded for its health benefits and for the flavor it adds to sauces and sautés, but when it comes to high-heat situations, leave that bottle in the cupboard. Its smoke point is a relatively low 320 degrees, and it emits unpleasant flavors and toxic chemicals when it passes this point. Because steaks are cooked at temperatures of up to 500 degrees, using dark olive oil risks a smoky kitchen and puts the meat’s flavor at risk, too. Butter’s smoke point is only 350 degrees, so we’d pass on that, too.

What to do instead: Generally, lighter oils have higher smoke points. If you plan to brush oil onto your steak, look for peanut, canola or extra light olive oil. Learn the best grilling tricks from professional chefs. 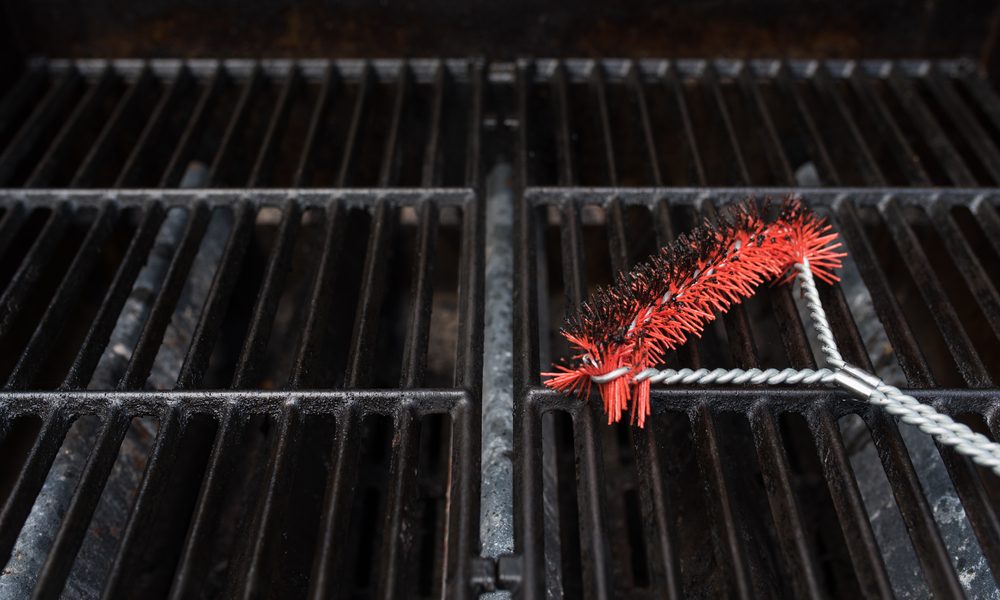 Mistake 10: Not cleaning the grill

There’s nothing quite so tedious as cleaning a grill, but a dirty grill makes for subpar steak. Debris on the grate makes it sticky and causes the meat to adhere and tear. You’ve worked hard-don’t let a little neglect stand in the way of cooking a perfect steak.

What to do instead: Clean the grill each time you use it. When the coals are still hot, use a wire brush to clear gunk off the grates. Top it with a small amount of oil, and the grill will be good for the next use. After you’ve finished cleaning your grill, learn a bit about everything you need to know about using a grill.