14 Breathtaking Places to Visit Before They Disappear

Some of these places might be almost or completely gone in your lifetime, so if you've always wanted to go make sure to book your flight now.

With many of the world’s amazing destinations under threat due to climate change and neglect, it’s not surprising that last-chance tourism is on the rise. So pack your bags, grab your camera, and head to one of these gorgeous destinations before it’s too late. Just make sure to avoid traveling to the most dangerous places in the world.

Back in 2015, the Grand Canyon was named one of the United State’s “most endangered historic places” by the National Trust for Historic Preservation. This beautiful natural landscape is threatened by tourism and mining and is at high risk for destruction and irreparable damage.

If experiencing the vast wildlife and gorgeous beaches of the Galapagos Islands in on your bucket list, you’re going to want to book a flight soon. Its ecosystem has been compromised due to overfishing and rising ocean temperatures. Coral reefs are beginning to die and native animals are threatened by tourists. Efforts are being taken to bring the island back to what it used to be though. Iguanas are being released on the islands after having gone extinct in that area due to invasive predators. They serve a vital role in dispersing seeds in areas that don’t have vegetation. This is what the world’s most polluted beaches used to look like.

In 2017, yet another study published in Nature determined that climate change has accelerated the rate at which the sea levels are rising. So it stands to reason that the destination most at risk is the lowest-lying country in the world, an island nation comprised of a series of atolls formed from coral in the Indian Ocean. Go now, while the Maldives are still a tropical paradise with year-round temperatures in the low 80s, crystalline waters, and beaches that glow in the dark.

The Amazon Rainforest is slowly disappearing. Five decades ago, Brazil incentivized its people to colonize the Amazon. The lush forest has been replaced with logging yards, cattle enclosures, and soy farms. The president of Brazil believes that the Amazon should be open for business and since his inauguration in January 2020, the rate of deforestation has grown by 92 percent. Increased human activity in the forest and a changing climate have caused devastating forest fires that create irreversible damage. If something isn’t done, the entire forest could be gone in a few generations. Here’s what iconic skylines would look like without air pollution. 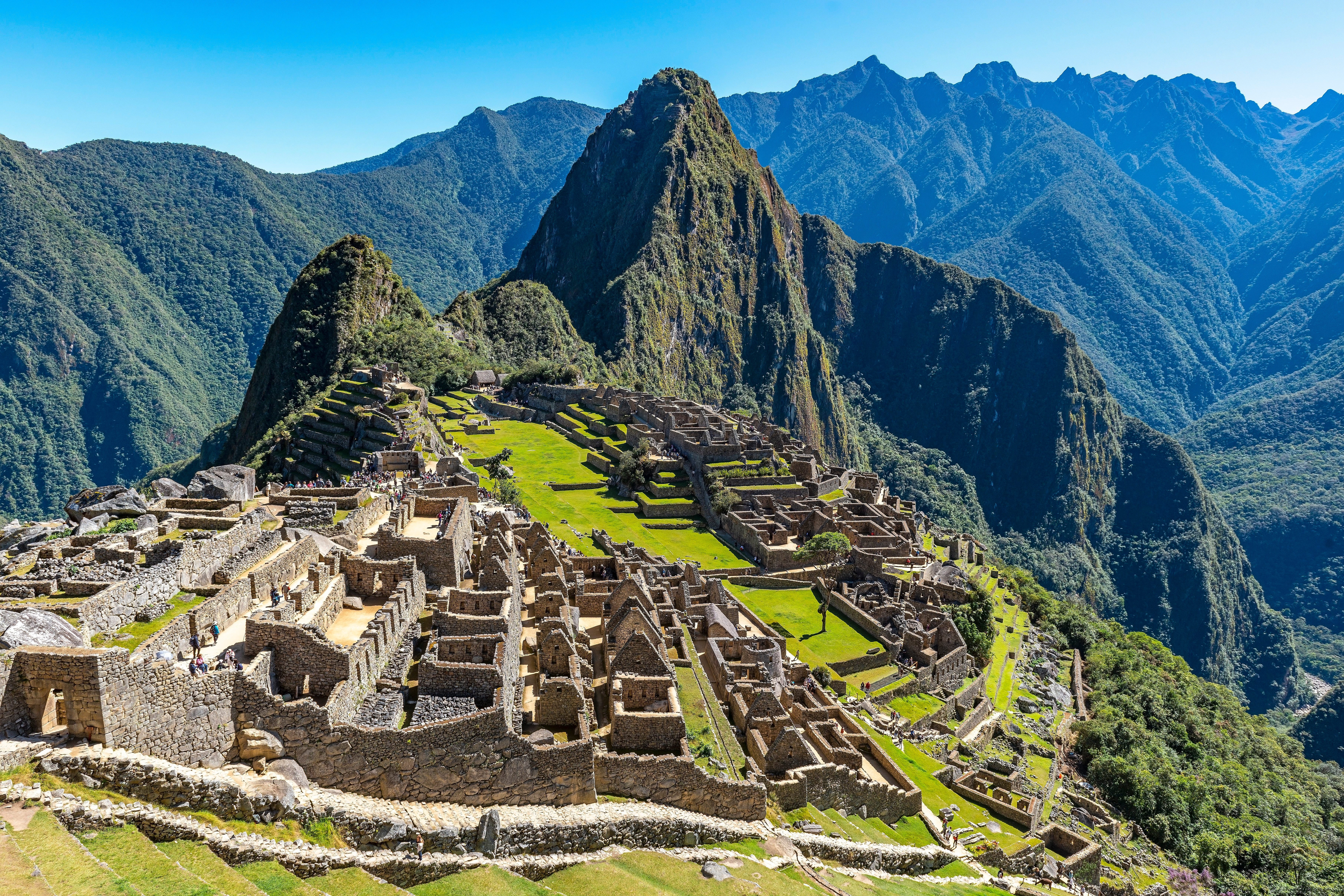 Due to its high altitude, extreme topography, and harsh weather conditions, the lost city is at high risk for erosion due to natural disasters. Preventative measures are being taken to make sure to site stays intact for as long as possible though and much of the money being brought in by tourism is used to keep its integrity.

The beautiful and unique wetland wilderness at the southern tip of Florida contains the Western Hemisphere’s largest mangrove ecosystem and largest continuous stand of sawgrass prairie. It is home to an exceptional variety of wading birds, reptiles, and numerous threatened species, such as the Florida panther and manatee. Urban development, industry, and agriculture pressures have destroyed more than half of the original Everglades and what remains has been on UNESCO’s List of World Heritage in Danger since 2010.

If your bucket list features a romantic gondola ride on picturesque canals, there’s no time like the present to book a trip to Venice. Due to rising sea levels and natural tectonic processes, the stunning “Floating City” is sinking at a rate of one to two millimeters per year, according to a study by Scripps Institution of Oceanography. That translates to more than three inches over the next two decades.

The world’s largest and most breathtaking coral reef is dying at the hands of humans. Climate change and pollution have led to acidification, extreme weather, and starfish outbreaks. Spikes in water temperature have caused large-scale coral bleaching episodes, in which vast swaths of colorful corals turn a sickly white. More than half of the reef’s coral cover has disappeared since the 1980s, according to the Australian Institute of Marine Science, and experts say the rest could be lost within two decades. Check out the beaches with the clearest water in the world.

Ready for your next big adventure? During summer in the southern hemisphere, the sea ice shrinks, allowing cruise ships access to a vast white wilderness larger than Europe and home to a wonderful assortment of species, including penguins, leopard seals, and orcas. A study published in Nature predicted that the world’s permanent ice caps is on track to shrink by nearly 25 percent by the end of the century and most of this will occur in the Antarctic Peninsula. This will irreversibly change the continent’s fragile ecosystem.

China’s most famous monument stretches more than 13,000 miles in its entirety, but according to Smithsonian Magazine, less than 9 percent of the Great Wall remains in good condition. Much of the Ming Dynasty portion of the wall had disappeared at the hands of erosion and human damage from tourists who walk on it, locals who pilfer bricks for their own use, and graffiti artists who use it as a canvas. While some restoration of the Great Wall is happening, a lack of substantial government funding to protect the landmark means its future will continue to be threatened. And since you’re interested in breathtaking places to visit before they disappear, you’ll also want to know more about the 14 most remote places on Earth.

From rococo palaces and Baroque castles to famed coffeehouses, world-class museums, and labyrinthine-like alleyways, Vienna’s appeal has endured for millennia. But in 2017, UNESCO added the beautiful historic center of the Austrian capital to the List of World Heritage in Danger due to a boom of high-rise projects that will change the city’s skyline forever.

When a hunk of land split off from the African continent 160 million years ago, the result was Madagascar—a Texas-size island with distinct ecosystems and an extraordinarily diverse collection of plant life and wildlife. An astounding number of Madagascar’s reptiles and mammals exist nowhere else on Earth. Sadly, most of Madagascar’s forests have been destroyed by deforestation, which remains the biggest single threat to the island’s wildlife. A study found that Madagascar’s remaining forests are being destroyed at the rate of about 1 percent each year.

Just like in Antarctica, the Patagonian ice fields in the Southern Andes range that straddles Argentina and Chile are shrinking at a shockingly fast rate due to global warming—so adventure seekers should visit before they disappear. In a 2015 study, scientists from UC Irvine found that Patagonia glaciers are receding at rates of up to 6.4 miles per year. They are melting away at some of the highest rates on the planet. Once you’ve visited the Patagonian ice fields, you should visit these other under-the-radar destinations.

A 2011 report by the United Nations predicted devastating effects of rising sea levels on the Caribbean islands by the end of this century, detailing a grim vision with more than 300 tourist resorts wiped out along with the airports, power plants, roads, and agricultural lands at many popular destinations. What’s the timeline? The Third National Climate Assessment, released in 2014, projected a sea-level rise of one to four feet by 2100.

Can Game of Thrones be too much of a good thing? The HBO mega-hit has made the ancient Croatian city so popular that it is literally turning tourists away. Dubrovnik is blessed with idyllic weather and a stunning coastline on the Adriatic Sea. But its starring role as the mythical King’s Landing has led to a sustained influx of tourists that threatens the World Heritage Site’s character, particularly in the pedestrians-only Old Town. In 2017 the city’s mayor, Mato Franković, capped the number of visitors at 4,000 per day—half the limit allowed by UNESCO—and told the Telegraph he also planned to curtail the number of cruise ships stopping in port. These UNESCO World Heritage sites should definitely be on your bucket list.

Dreaming of touring one of France’s most beloved wine-growing regions? It might be smart to do it sooner is rather than later. Bordeaux is facing a two-thirds fall in production over the next 40 years due to climate shifts that affect rainfall, temperature, and hours of sunshine. According to Wine Spectator, at the Vinexpo conference in Bordeaux in 2017, Harvard professor John Holdren predicted that the land suitable for grape-growing will potentially shrink by 23 percent by 2050. These are the charming French towns that also deserve a visit.

More than three million people visited Montana’s Glacier National Park in 2017, making it the busiest year in park history. In 2019, 2.45 million people visited. The record-setting attendance was all the more notable given that this pristine park is rapidly losing its eponymous glaciers. A report released by the U.S. Geological Survey found that over the past 50 years global warming has caused the shrinking of the 26 remaining glaciers in the park—a number down from 150 in 1850. At this rate, scientists predict there will be no ice left by the end of the century.

One of over 17,000 islands that compose the Republic of Indonesia, Komodo Island is a national park devoted to the world’s largest lizard, a protected species (with a venomous bite) that can grow to 8.5 feet and run at speeds of up to 12 mph. So many tourists flock to the island to get up close and personal with a Komodo dragon that tourism officials have sounded alarm bells. In April 2019, they announced that they were closing Komodo Island for a year, starting in January 2020. The decision came in response to an alleged smuggling ring that removed 41 Komodo dragons from the island and sold them abroad for about $35,000. During the closure, the Indonesian government also plans to launch a conservation program for the dragons. The rest of the national park, which has beautiful scenery and snorkeling, will stay open, however. These are some other popular destinations that have been ruined by tourism.

A tourist draw for over two millennia, this landlocked salt lake between Israel and Jordan is located at the lowest point on Earth, nearly 1,400 feet below sea level. The Dead Sea’s other unique feature is the remarkably high salinity of its water, which is said to have healthful benefits and makes swimming more like floating. Unfortunately, the future is less than idyllic. Since 1960, the Dead Sea has lost a third of its surface area and continues to shrink about 3.3 feet per year, according to the environmentalist group EcoPeace Middle East. Next, don’t miss the most extreme travel adventures in the world.