These poems are perfect for young children to enhance their vocabulary and practice their reading skills. Hey, they may even think poetry is cool! 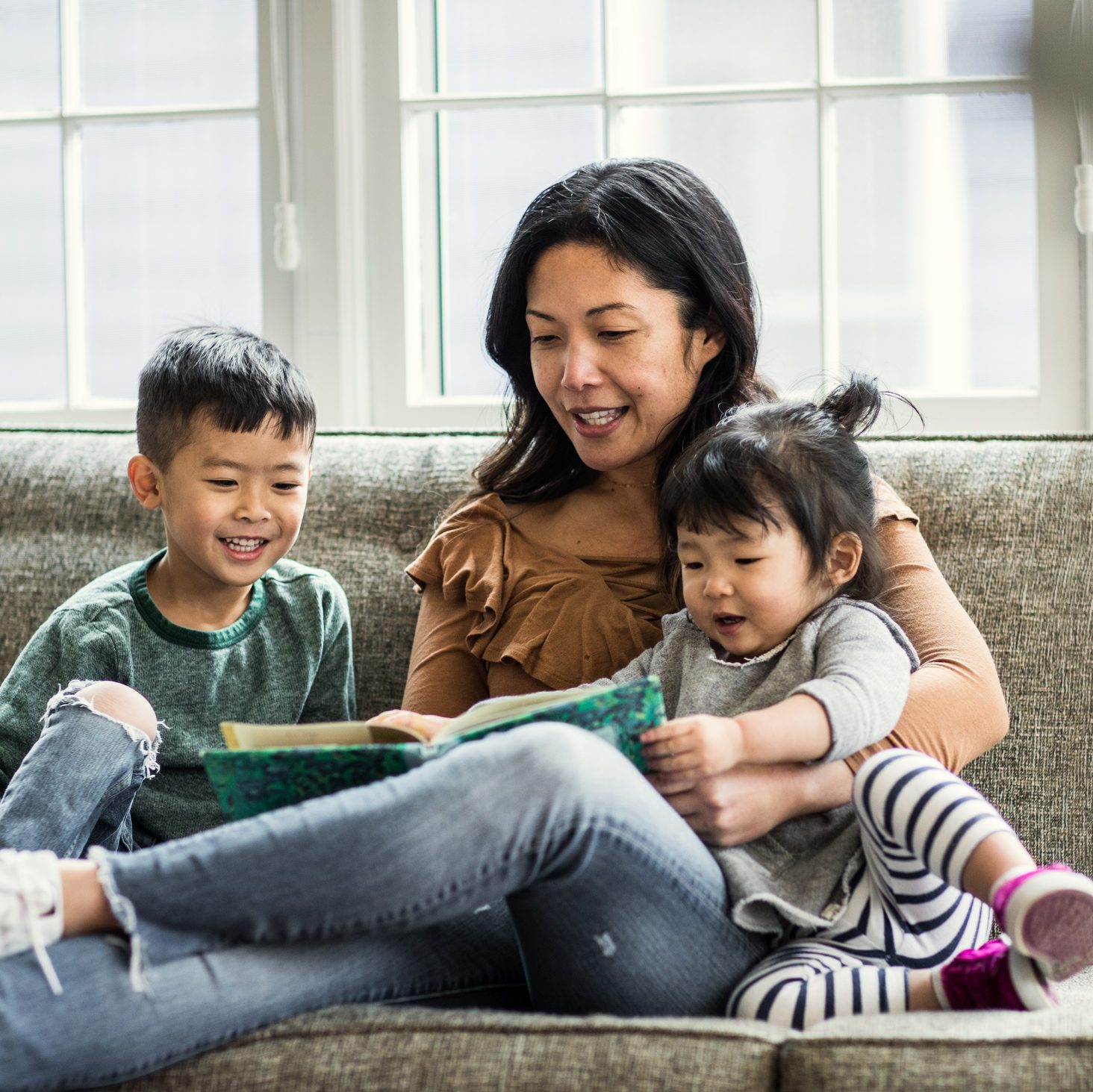 Between nursery rhymes, storybooks (especially Dr. Seuss), and singalongs, children are surrounded by poetry every single day without even realizing. Besides just bringing joy to your kids, poetry can aid in your child’s cognitive development by helping them understand patterns, enriching their vocabulary, and helping them remember information. These short poems for kids will be easy for your child to recite along with you while they unlock the best parts of their imagination. Make sure you also check out these funny poems that will surely give you and your kids a chuckle. 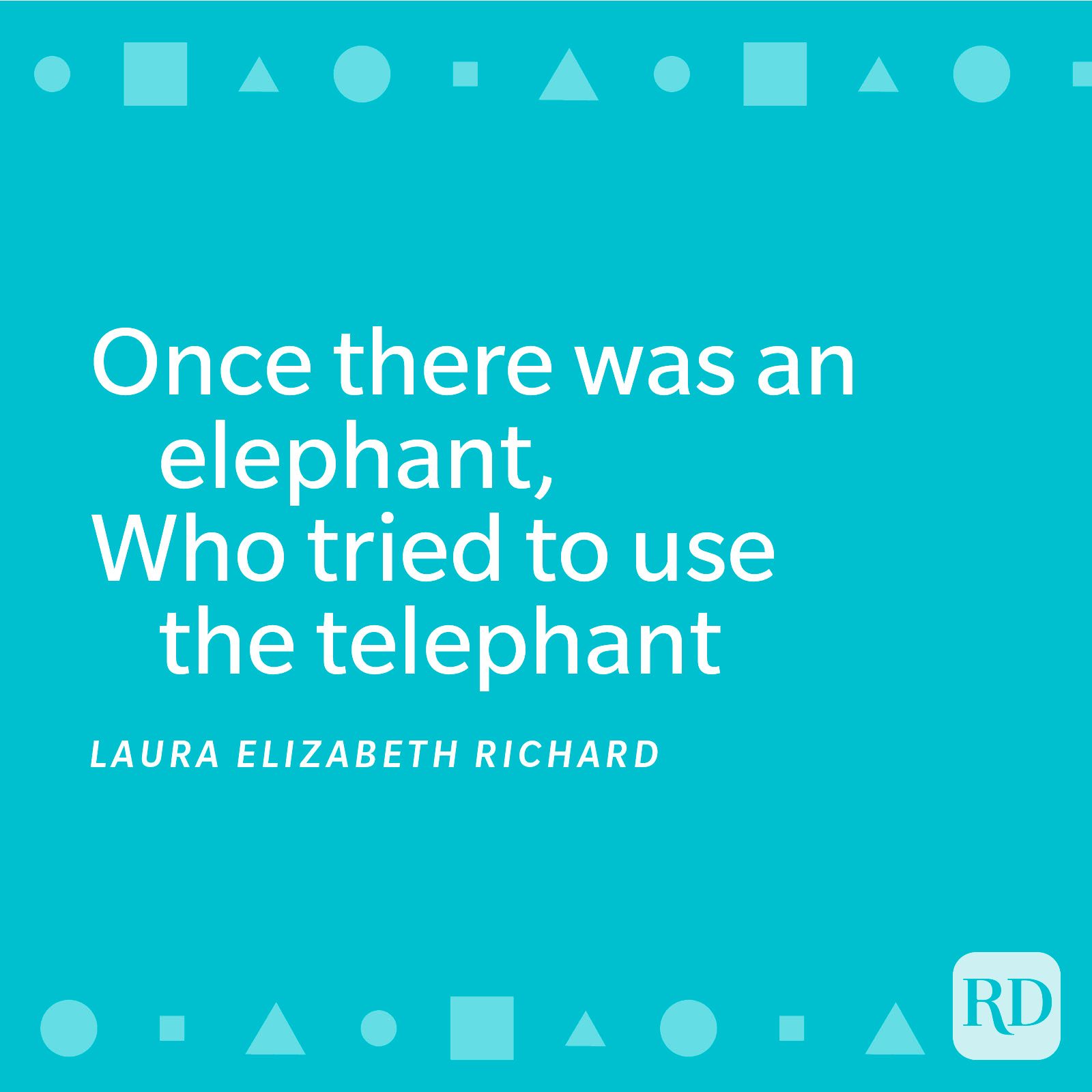 (Dear me! I am not certain quite
That even now I’ve got it right.)
Howe’er it was, he got his trunk
Entangled in the telephunk;

The more he tried to get it free,
The louder buzzed the telephee—
(I fear I’d better drop the song
Of elephop and telephong!)

This children’s poem will certainly not be irrelephant in your household as your kids will be giggling for days. Make them laugh even more with these silly puns for kids. 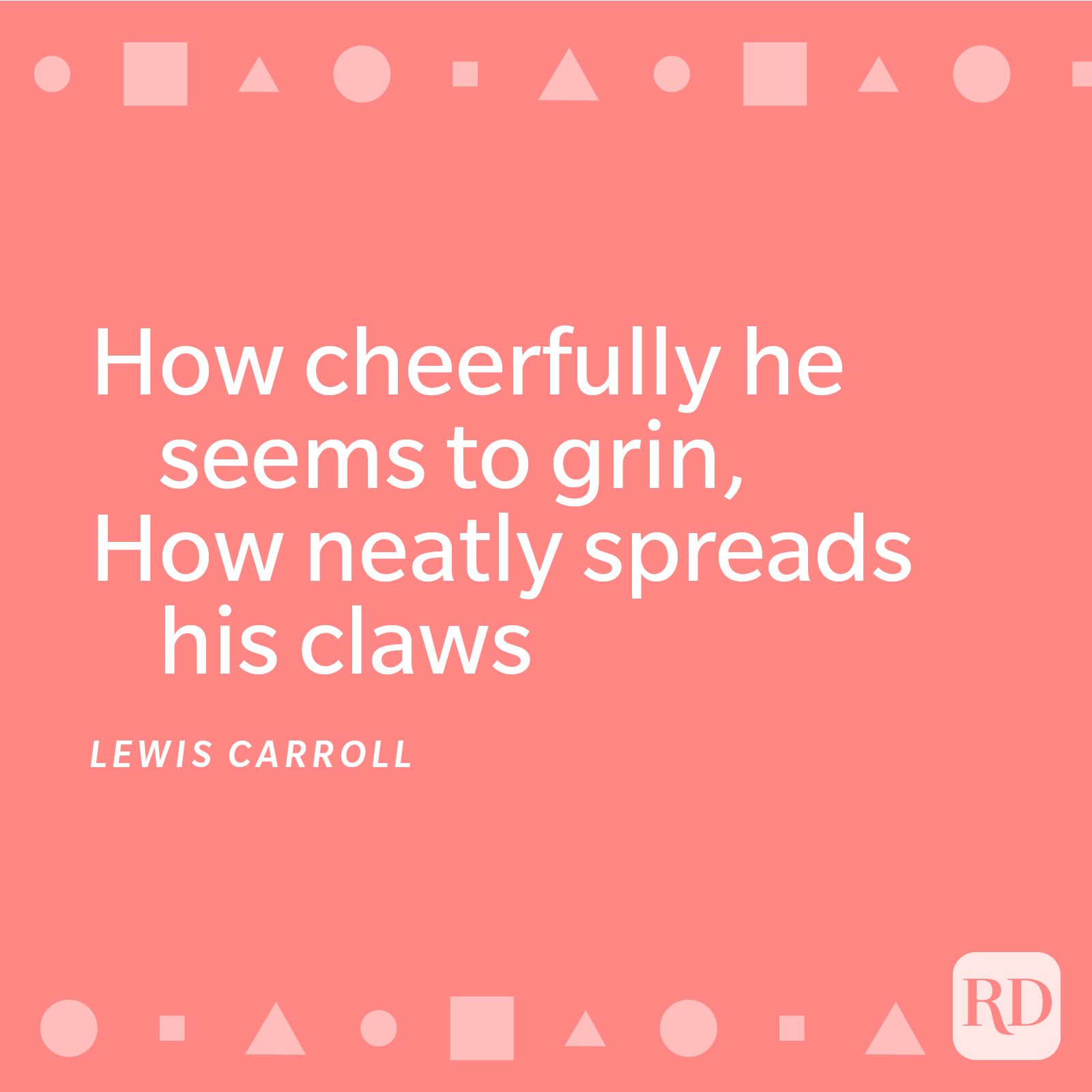 How doth the little crocodile
Improve his shining tail,
And pour the waters of the Nile
On every golden scale!
How cheerfully he seems to grin,
How neatly spreads his claws,
And welcomes little fishes in,
With gently smiling jaws!

You may know Lewis Carroll as the author of Alice’s Adventures in Wonderland, but you may not have known that he is truly a master of quirky poems. Although the story of Alice falling down the rabbit hole may be a bit advanced for your little ones, get them reading with some of the best children’s books ever written. 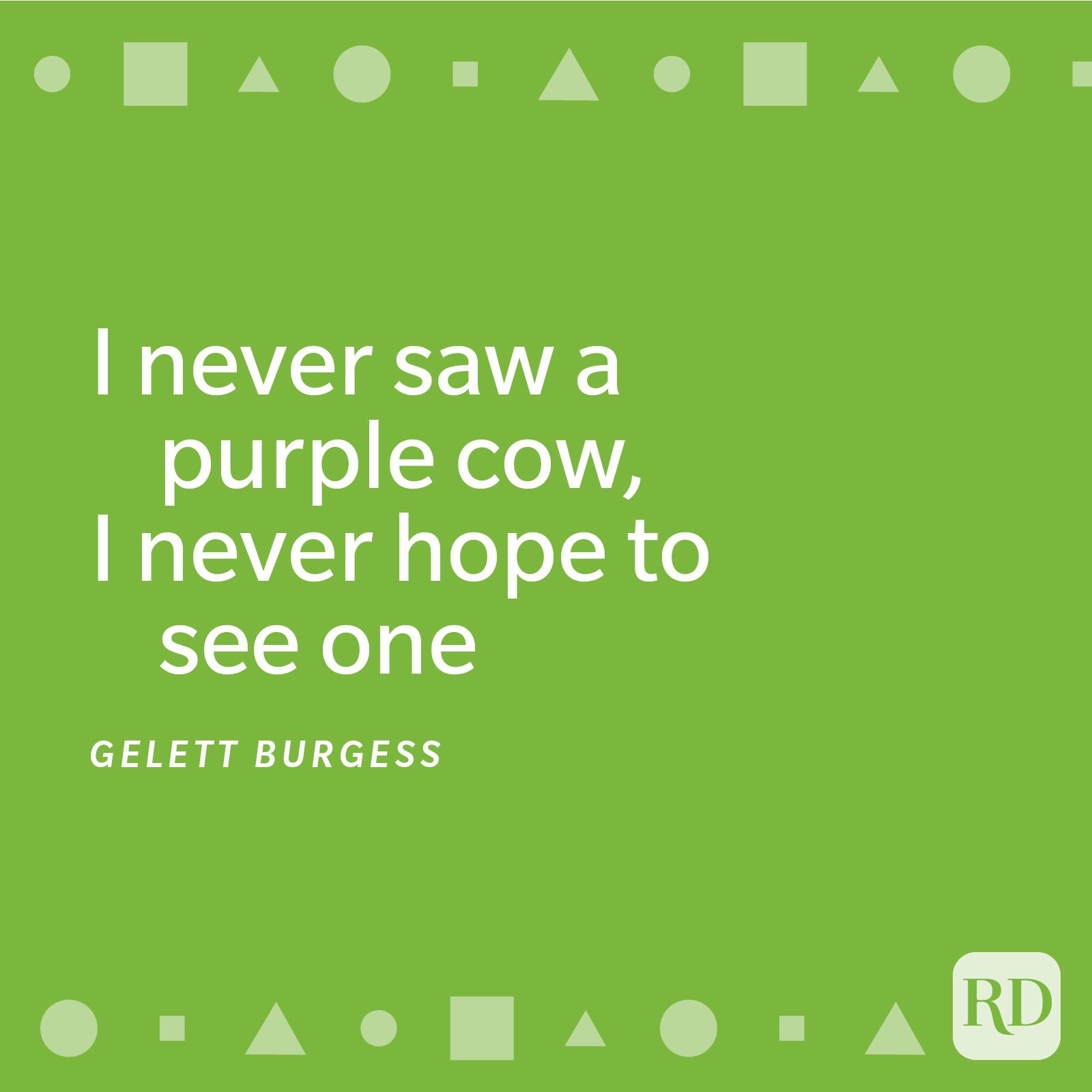 I never saw a purple cow,
I never hope to see one,
But I can tell you, anyhow,
I’d rather see than be one!

Children’s poems like this one could be why these people believed these hilarious things as kids. 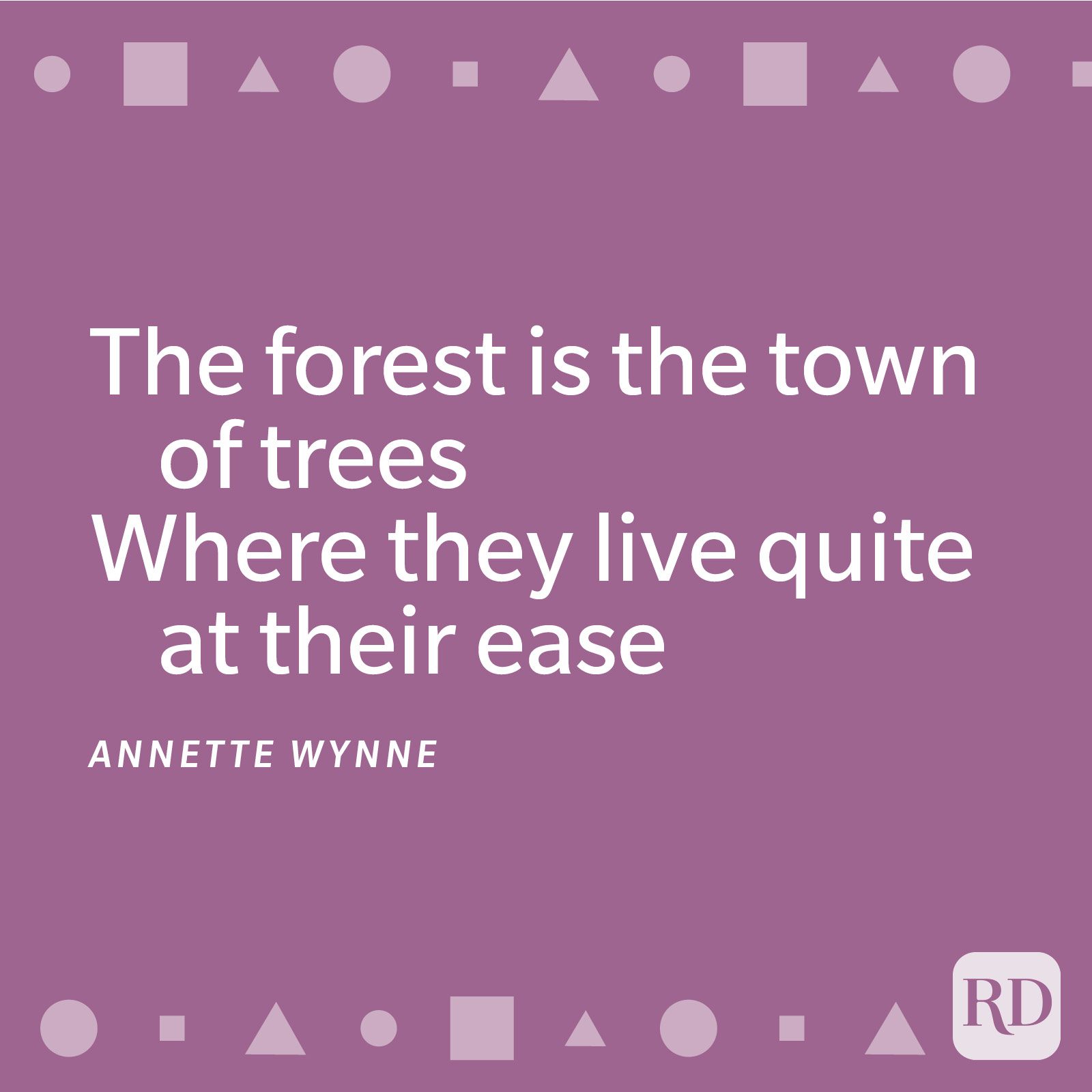 The forest is the town of trees
Where they live quite at their ease,
With their neighbors at their side
Just as we in cities wide.

A town of trees sounds absolutely adorable! See what other funny things kids have had to say about nature. 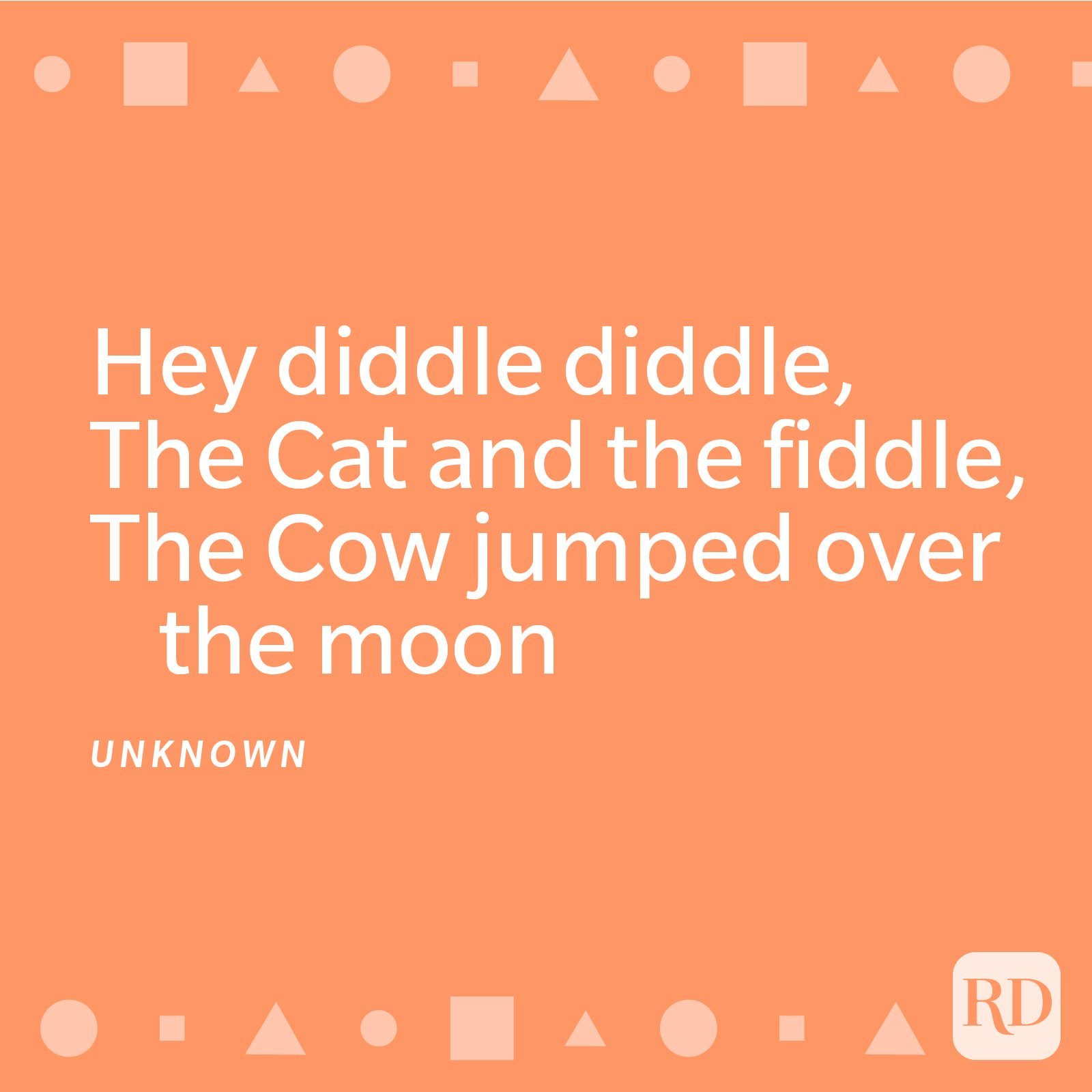 Hey diddle diddle,
The Cat and the fiddle,
The Cow jumped over the moon,
The little Dog laughed to see such sport,
And the Dish ran away with the Spoon.

This classic children’s poem turned nursery rhyme is as cute as can be, but they aren’t all so innocent. Check out these other classic nursery rhymes you probably didn’t know were racist. 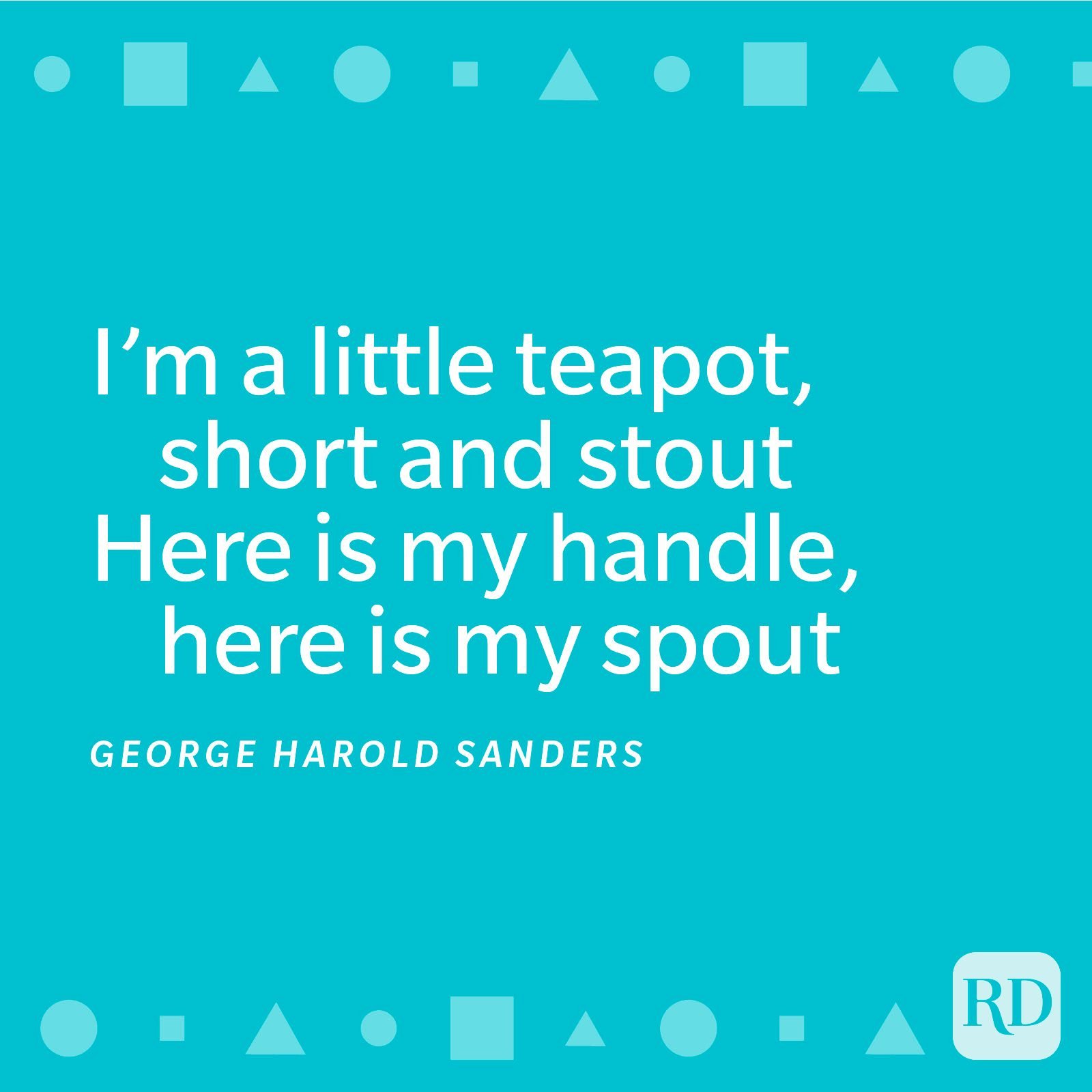 When I get all steamed up
Hear me shout
“Tip me over
and pour me out!” (lean over toward spout)

I’m a clever teapot,
Yes, it’s true
Here let me show you
What I can do

I can change my handle
And my spout (switch arm positions)
Just tip me over and pour me out! (lean over toward spout)

Although originally a poem, this one begs to be sung. After you sing until your vocal cords can’t take it anymore, take a breather and try to solve these tricky riddles for kids. 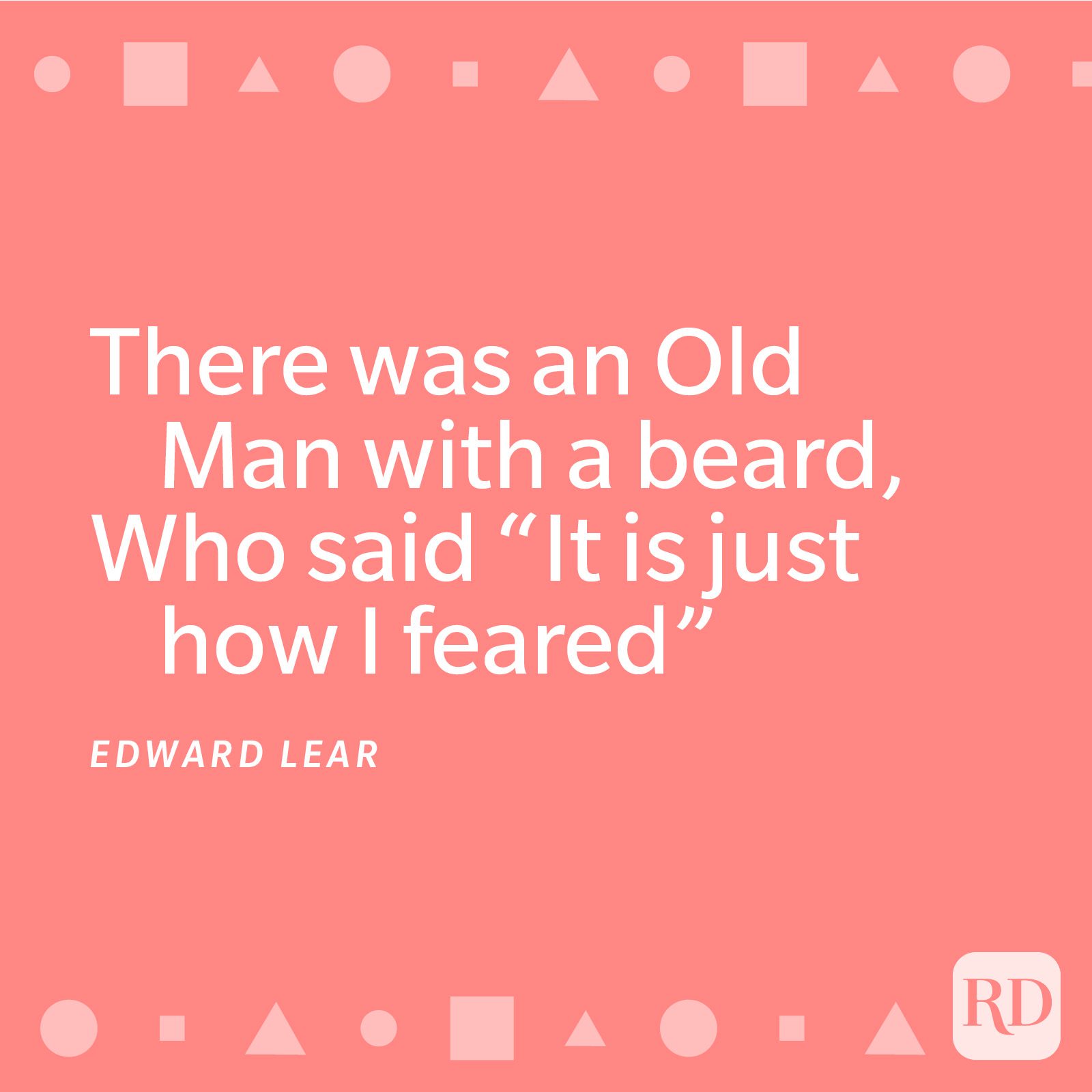 There Was an Old Man with a Beard

There was an Old Man with a beard,
Who said “It is just how I feared—
Two Owls and a hen,
For Larks and a wren,
Have all built their nests in my beard!”

Want to get your kids to laugh without having to memorize poems for kids? Try learning some of these short jokes that are much easier to remember. 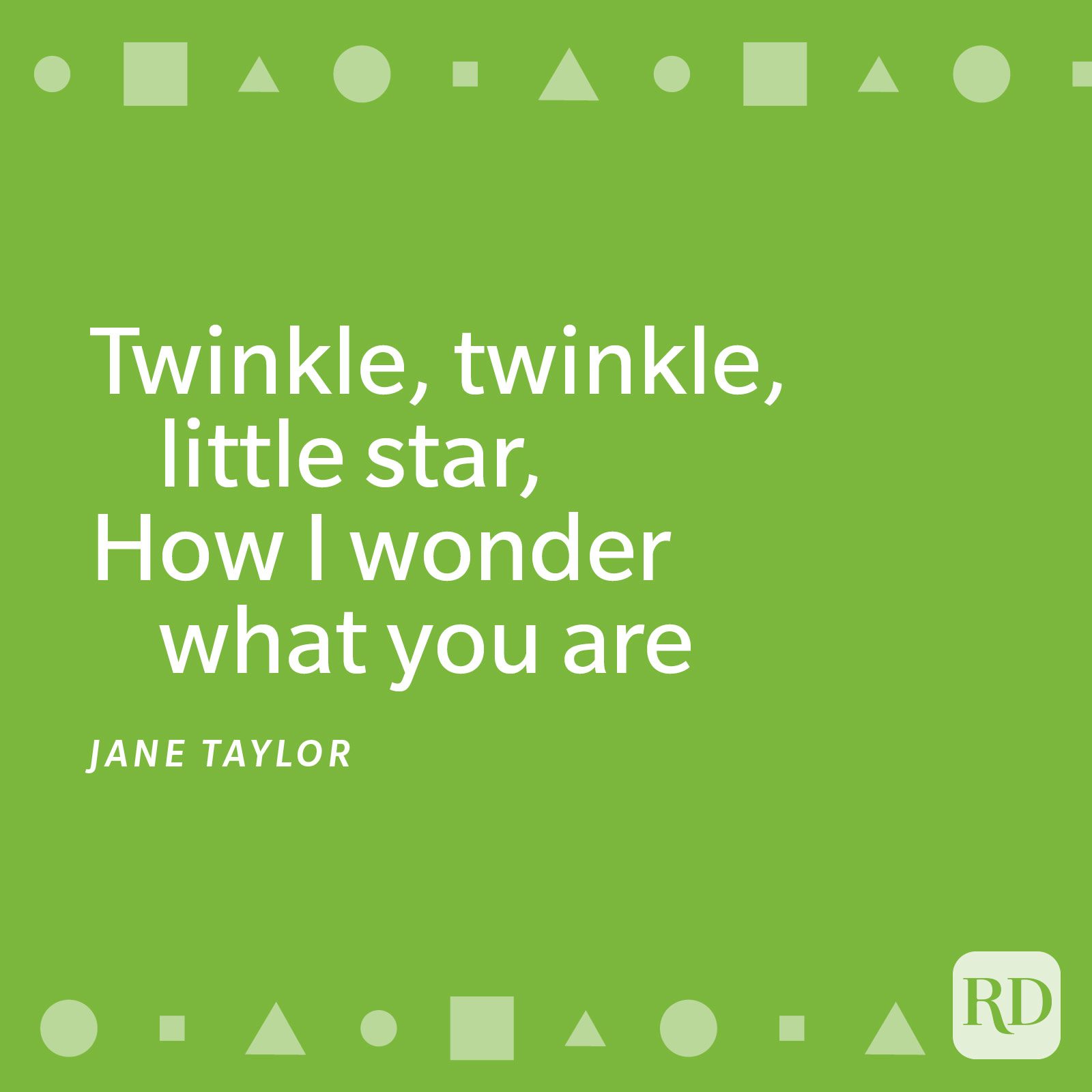 We all know that one! Lots of these poems for kids have been turned into songs. Check out more inspirational poems that will definitely warm your heart. The Days of the Months

Thirty days hath September,
April, June, and November;
February has twenty-eight alone.
All the rest have thirty-one,
Excepting leap-year—that’s the time
When February’s days are twenty-nine.

There are plenty of adults that need to have this children’s poem memorized too. Here are more mnemonics and tricks to remember useful facts like the number of days each month has. 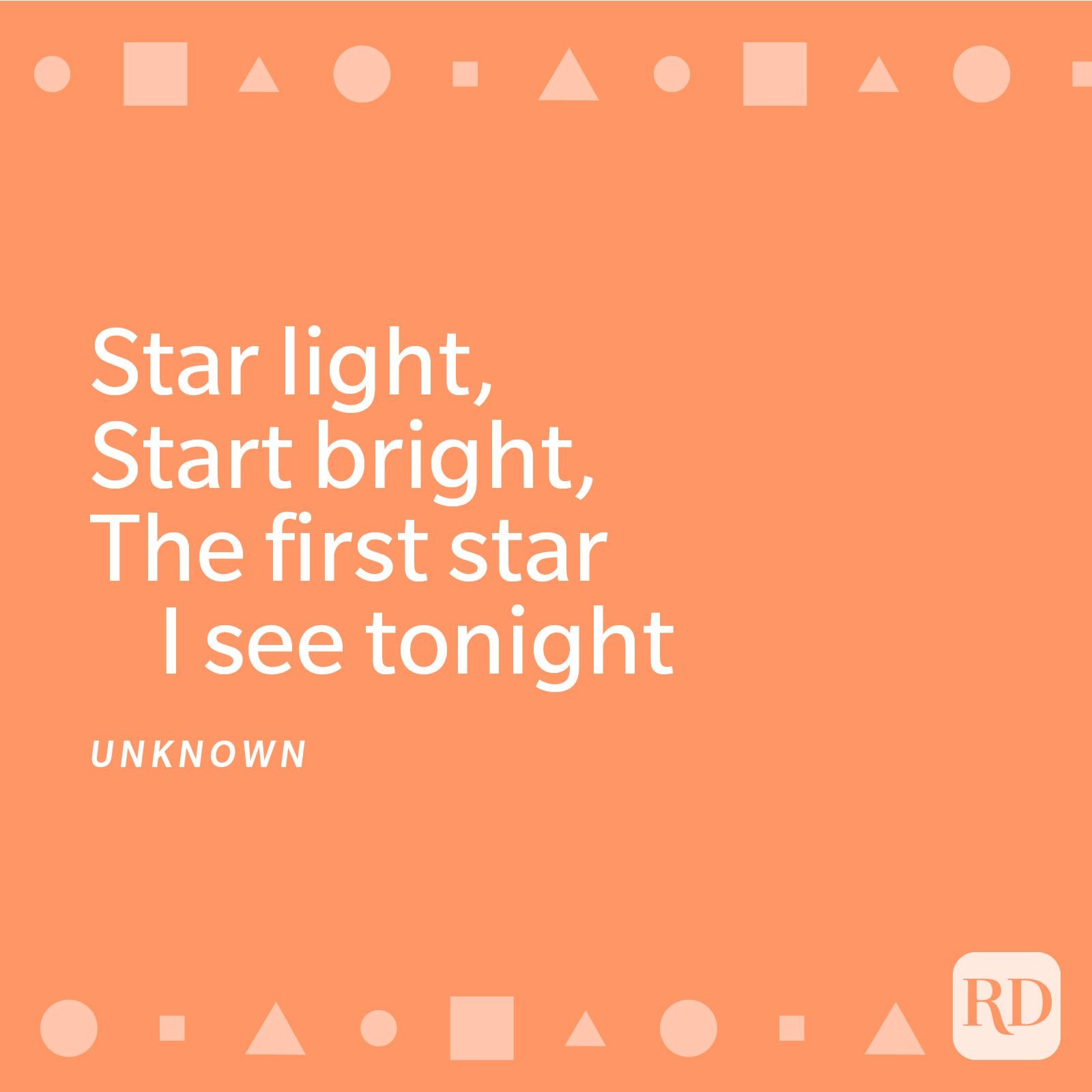 Star light, start bright,
The first star I see tonight;
I wish I may, I wish I might,
Have the wish I wish tonight.

Perfect for an evening with a clear sky to get your kids believing in magic even more than they already do. Fairy tales are just as omnipresent in children’s lives as poems for kids are, and these are the most popular fairy tale stories of all time. 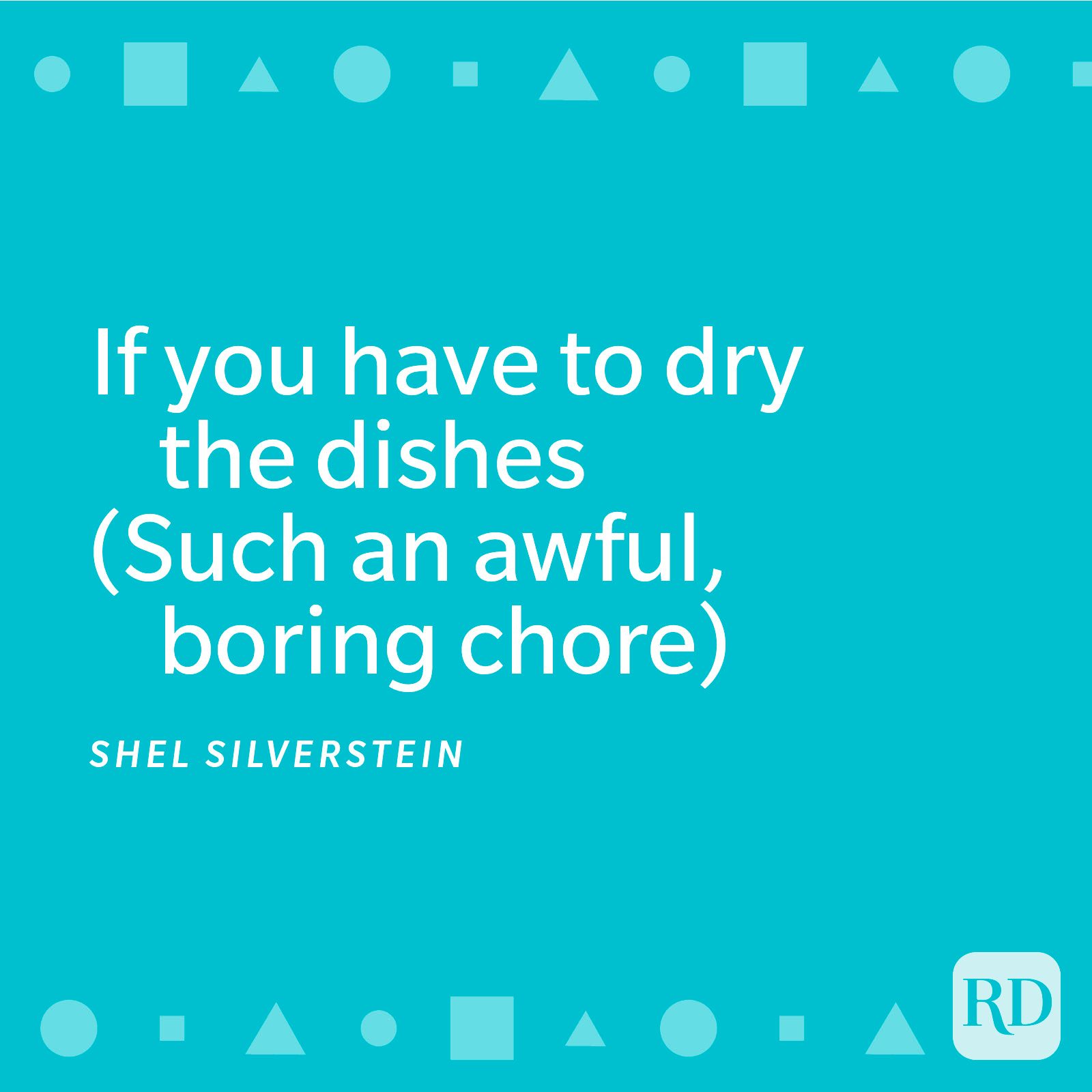 How Not to Have to Dry the Dishes

Author of The Giving Tree and a vast collection of poetry books, Shel Silverstein, also known as Uncle Shelby, is known for his cartoons, songs, and poems for kids. Don’t miss these trivia questions for kids that’ll test their smarts. 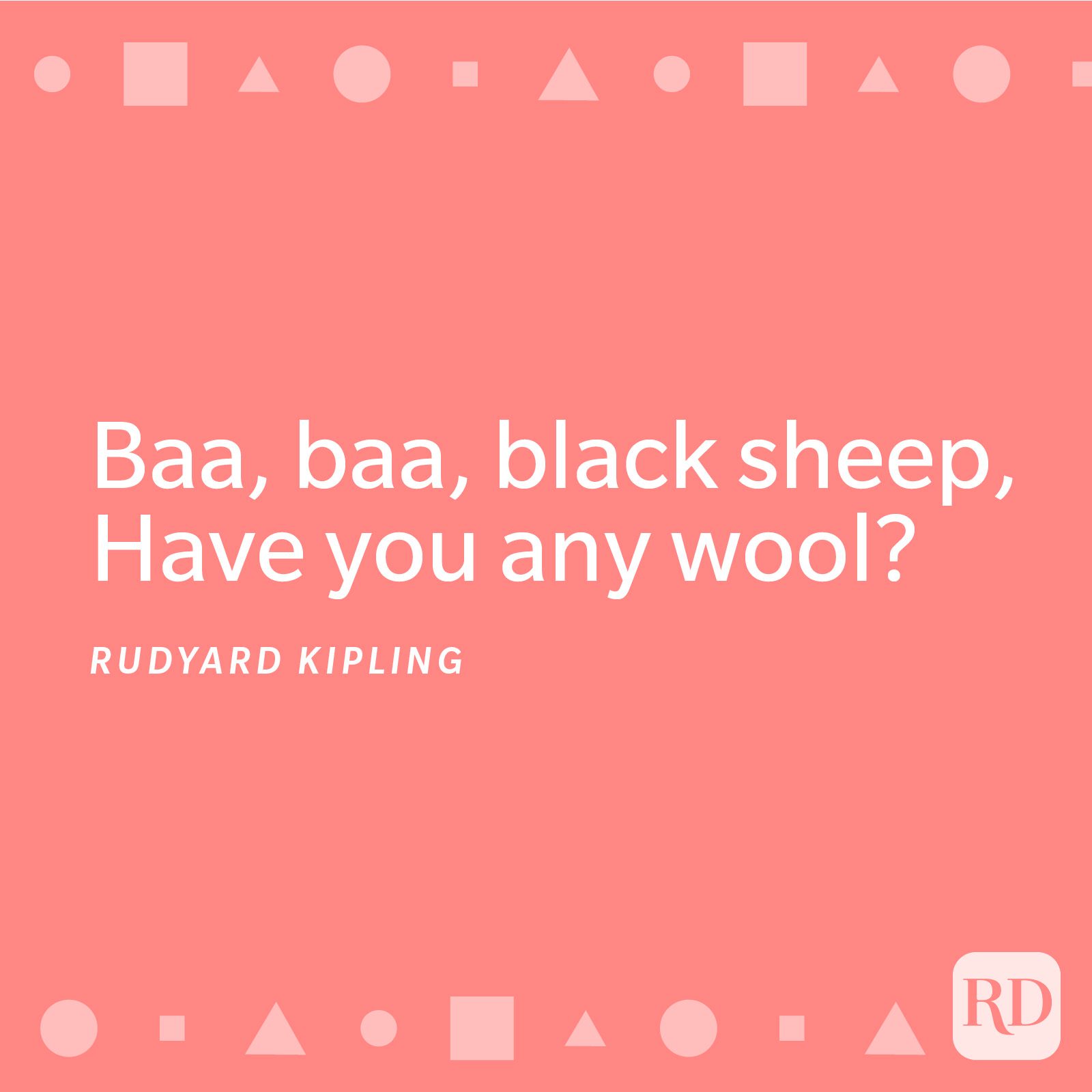 Did you know that the author of this poem, Rudyard Kipling, also wrote The Jungle Book? His childhood in India actually inspired much of his work. 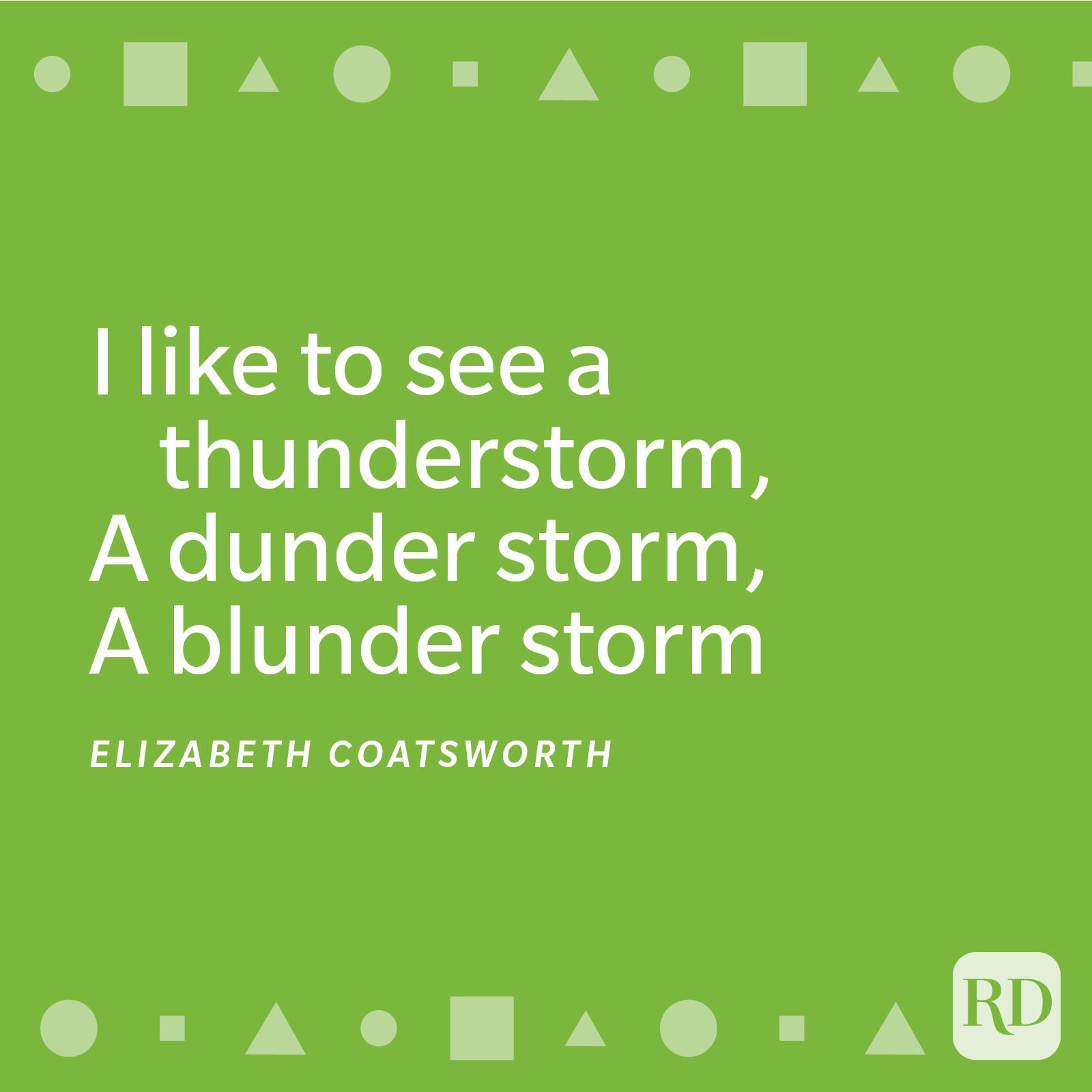 I like to hear a thunderstorm,
A plunder storm,
A wonder storm,
Roar loudly at our little house
And shake the window sills!

This children’s poem about thunderstorms can make your child laugh at something they may be afraid of. Distract them from the storm even more with one of the 17 best books to read as children (and again as grown-ups). 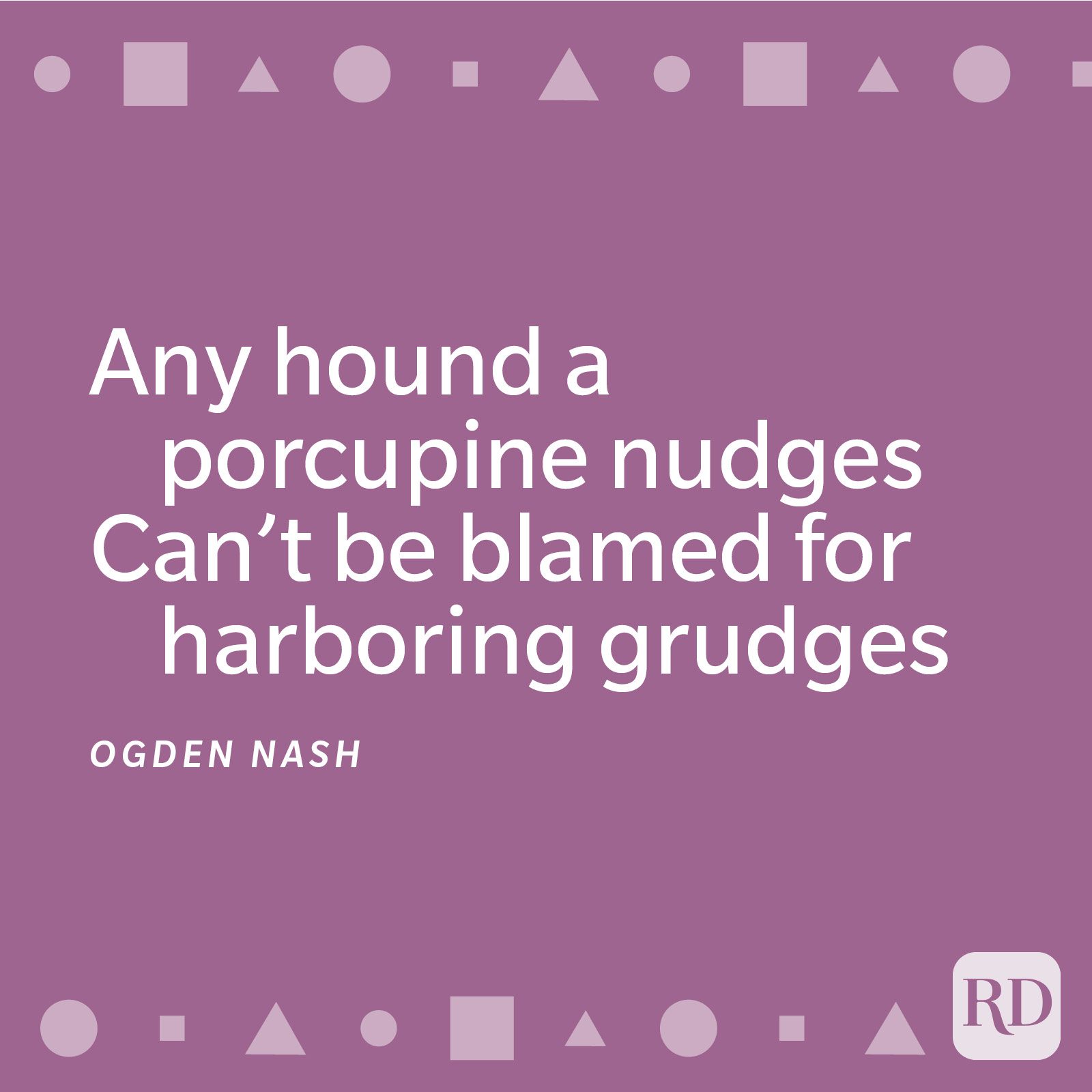 Any hound a porcupine nudges
Can’t be blamed for harboring grudges,
I know one hound that laughed all winter
At a porcupine that sat on a splinter.

This short poem for kids illustrates perfectly how rhymes work. To blow their mind even more, see if you can get them to find a word that rhymes with these words that just don’t seem to rhyme with anything. 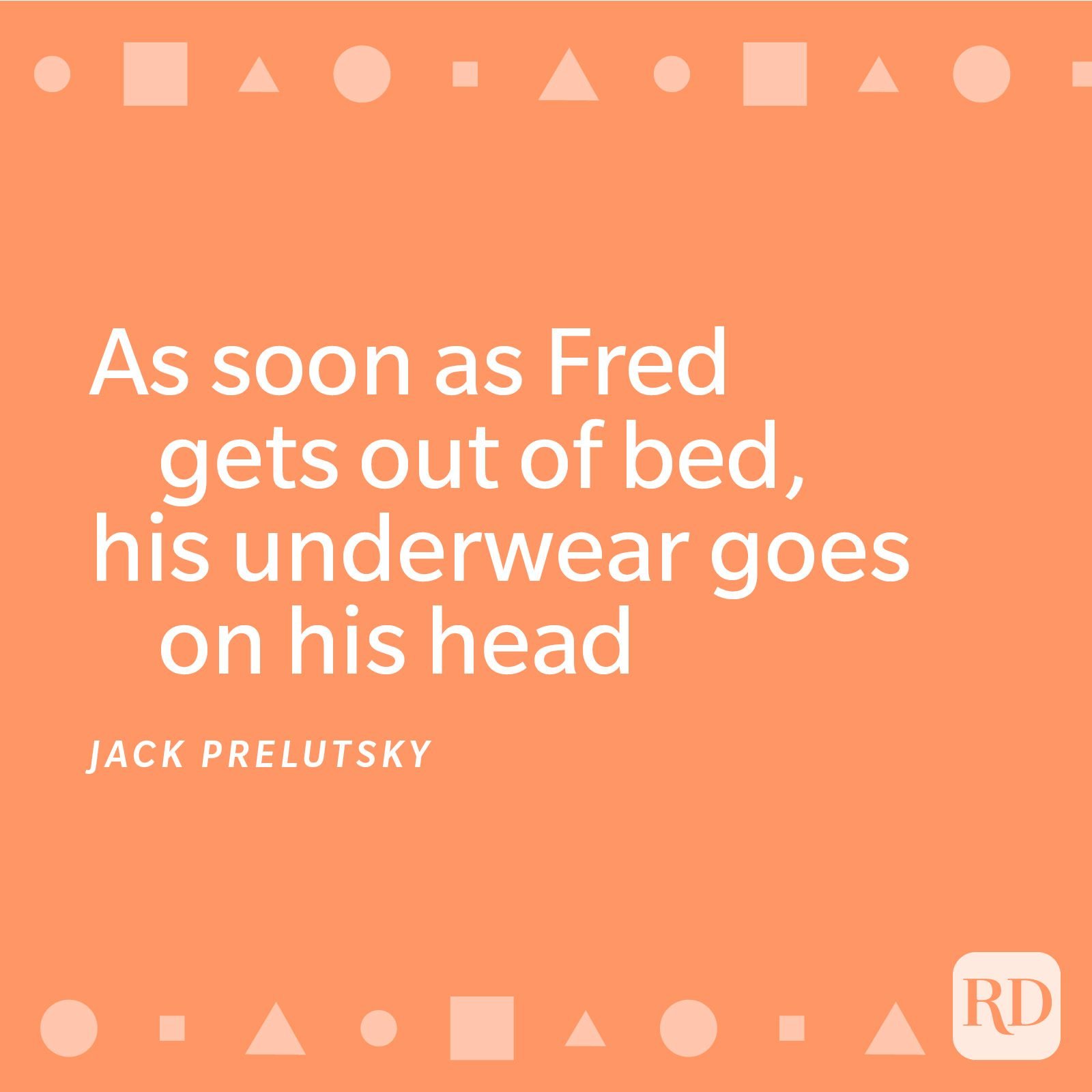 As Soon as Fred Gets Out of Bed

As soon as Fred gets out of bed,
his underwear goes on his head.
His mother laughs, “Don’t put it there,
a head’s no place for underwear!”
But near his ears, above his brains,
is where Fred’s underwear remains.

At night when Fred goes back to bed,
he deftly plucks it off his head.
His mother switches off the light
and softly croons, “Good night! Good night!”
And then, for reasons no one knows,
Fred’s underwear goes on his toes.

Jack Prelutsky has published over 50 collections of poetry, most notably The New Kid on the Block, a cute assortment of children’s poems. Limericks are some of our favorite poems for kids. Here are 15 limericks only clever people will get. 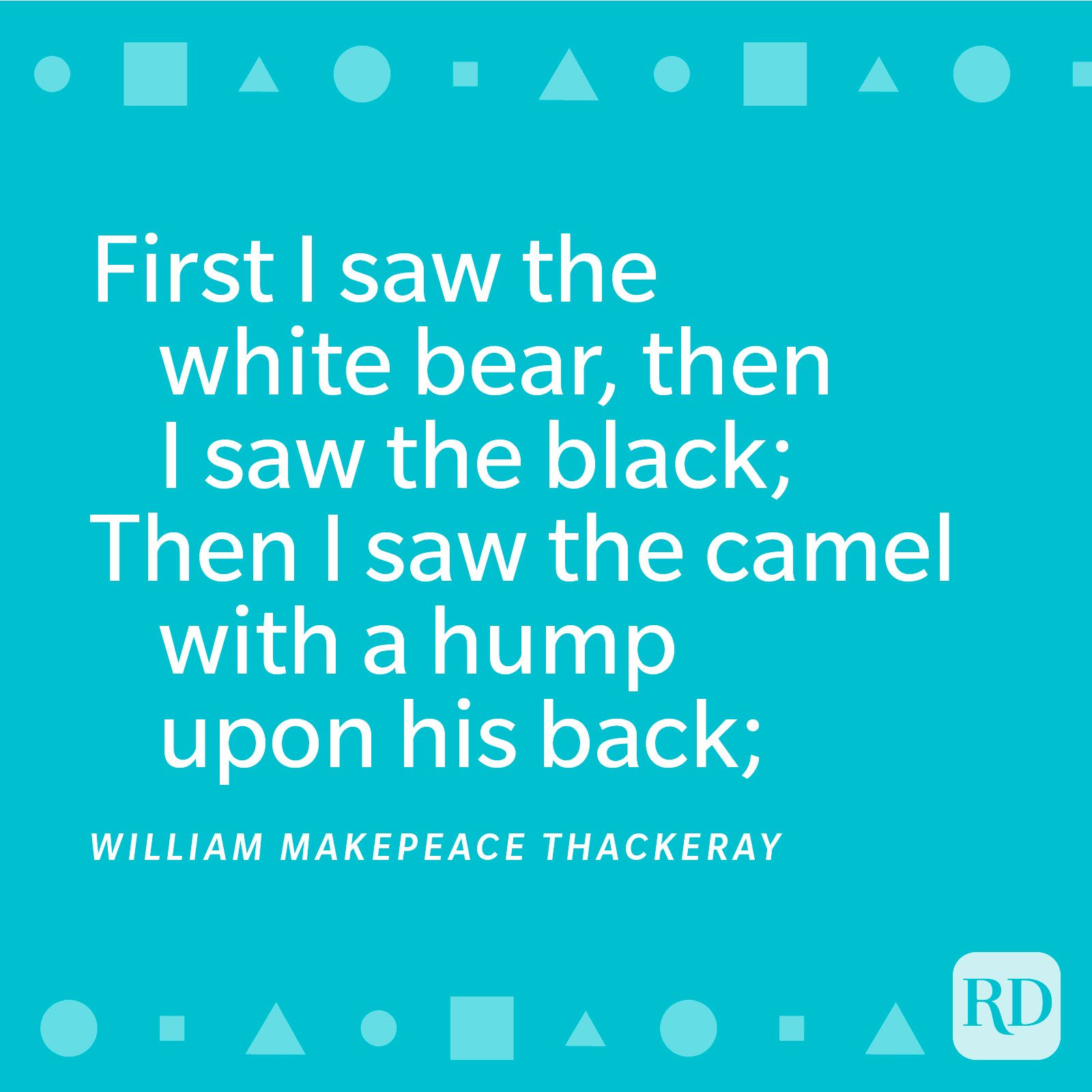 Your child will be begging to go to the zoo after hearing this poem. You can even recite it in the car on the way. 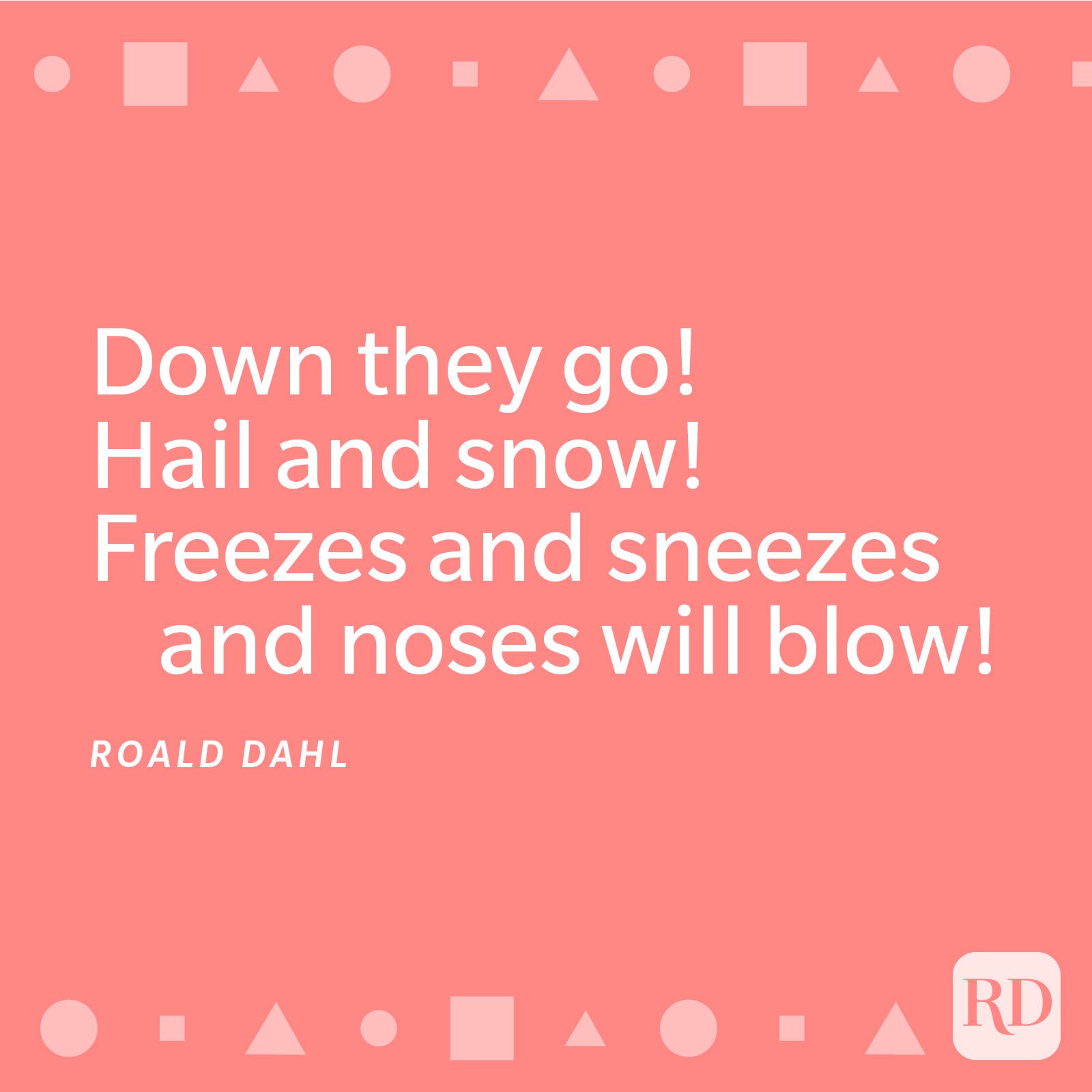 Down they go!
Hail and snow!
Freezes and sneezes and noses will blow!

Who doesn’t love a little Roald Dahl? From Charlie and the Chocolate Factory to Matilda and James and the Giant Peach, there’s a story for everyone. Don’t miss the best classic children’s book quotes that everyone needs to hear. 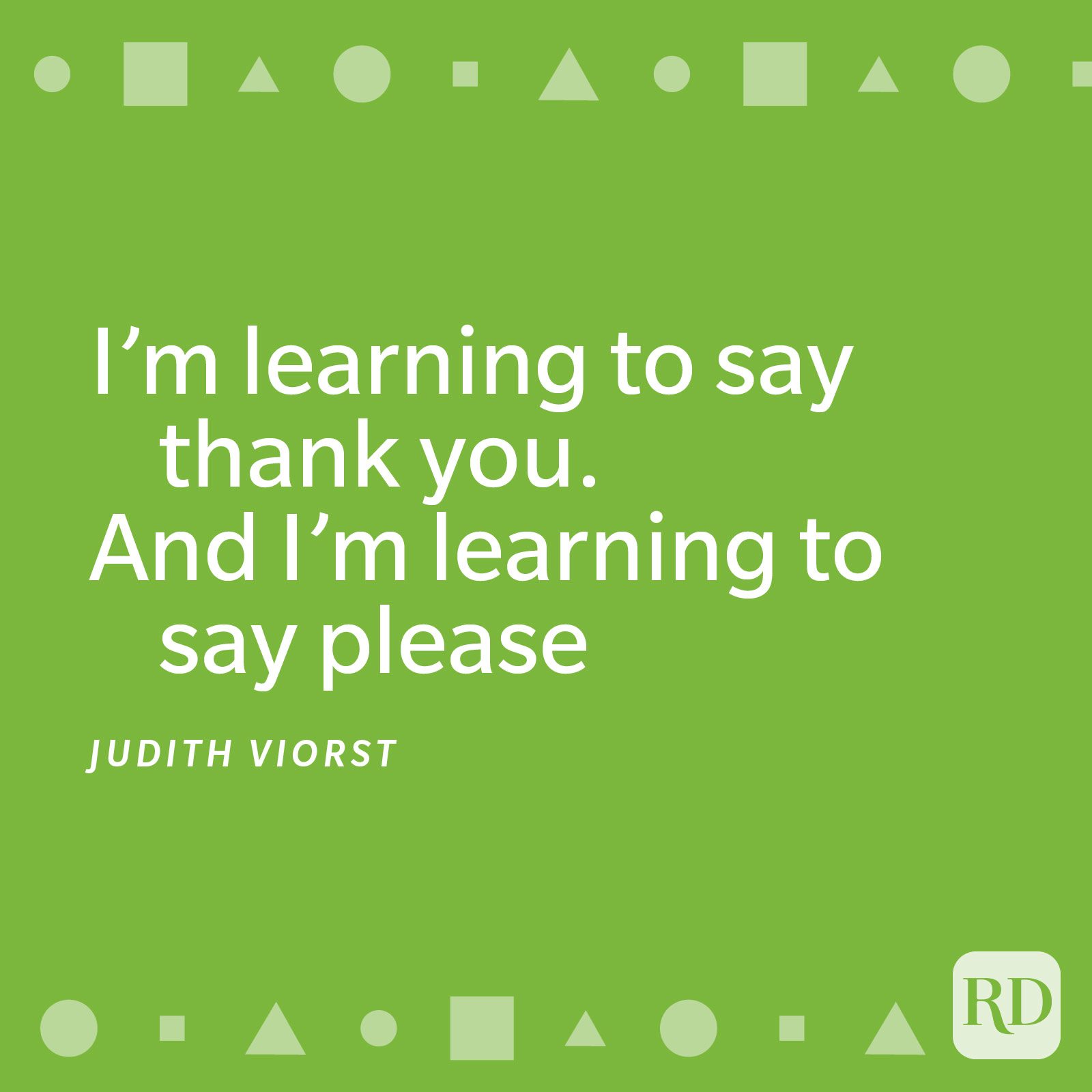 Eating corn on the cob quietly is an art that most adults have yet to master and arguably an important lesson we all need to learn. These are the forgotten manners every parent should be teaching their child. 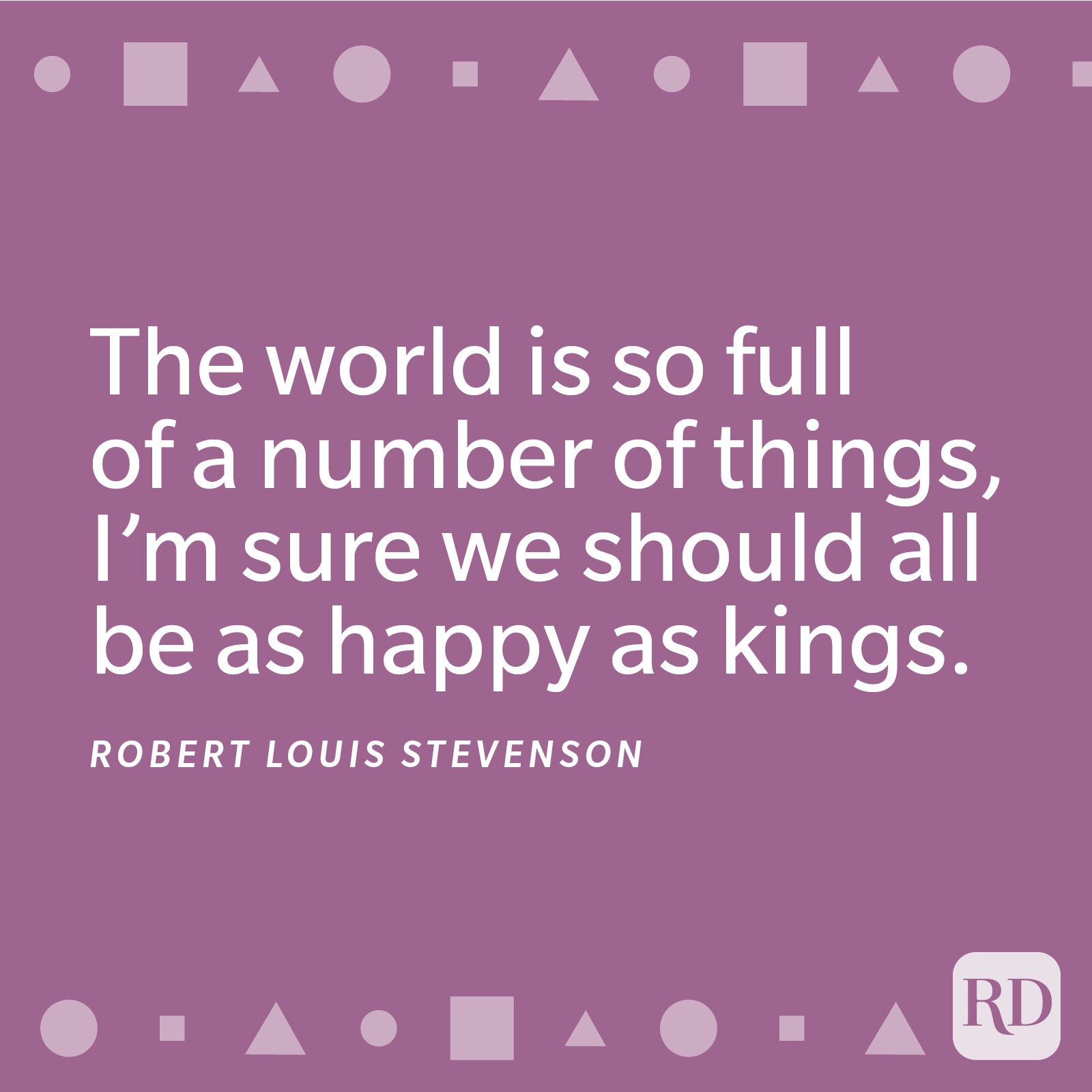 The world is so full
of a number of things,
I’m sure we should all
be as happy as kings.

Thinking happy thoughts is the perfect introduction to kindness. Check out these 12 children’s books that encourage kids to be nice. 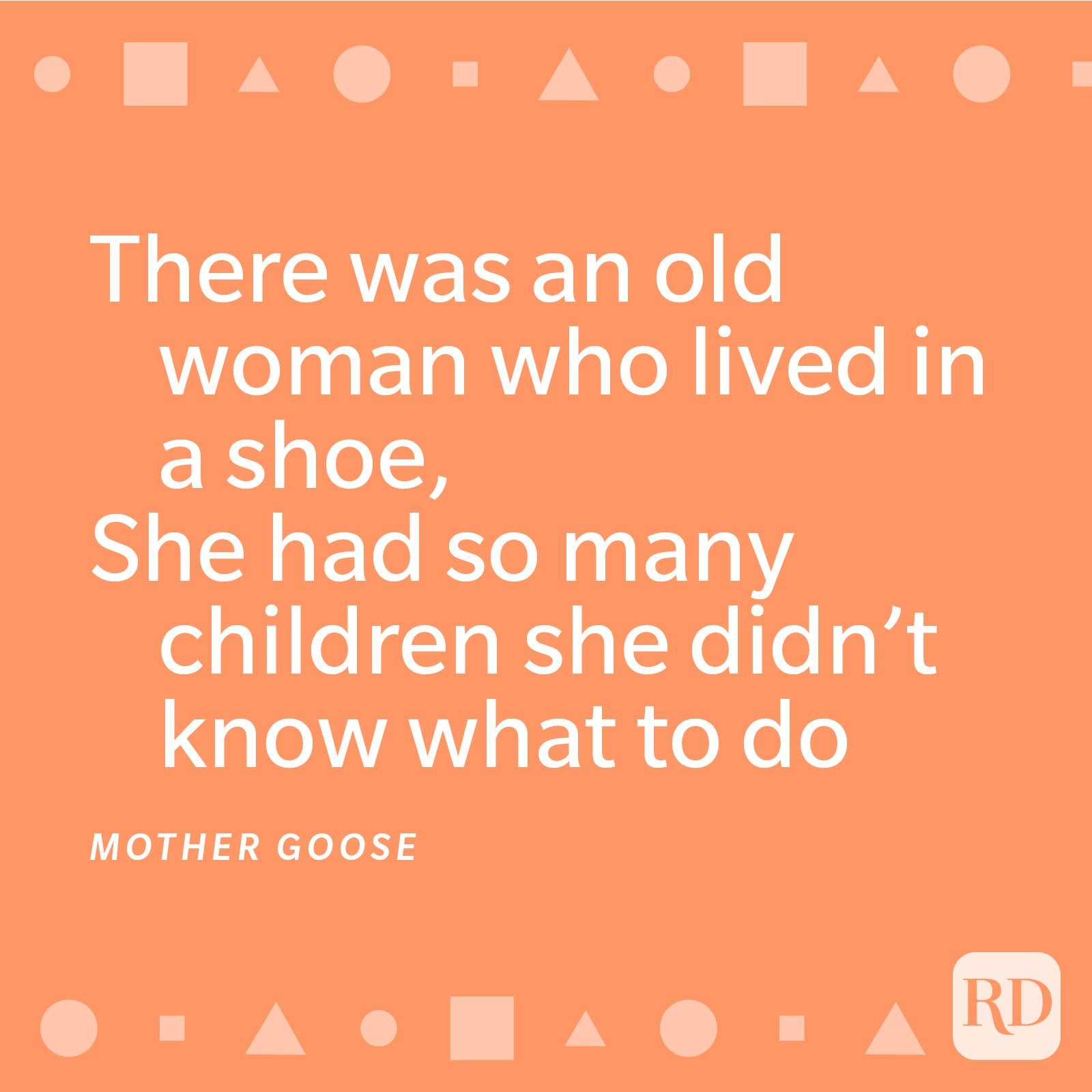 There Was an Old Woman Who Lived in a Shoe

There was an old woman who lived in a shoe,
She had so many children she didn’t know what to do;
She gave them some broth without any bread,
Kissed them all soundly and sent them to bed.

Mother Goose may be the most known anonymous creator of all time. As the author of many children’s nursery rhymes, her poems for kids are justly some of the most popular. Next, read these quirky limericks to your kids that even you will find funny.