13 Must-See Sights You Can Only See on Route 66

As one of the first U.S. highways ever made, Route 66 carries with it a sense of nostalgia, opportunity, and adventure. No trip down the Mother Road is complete without making these unique stops. 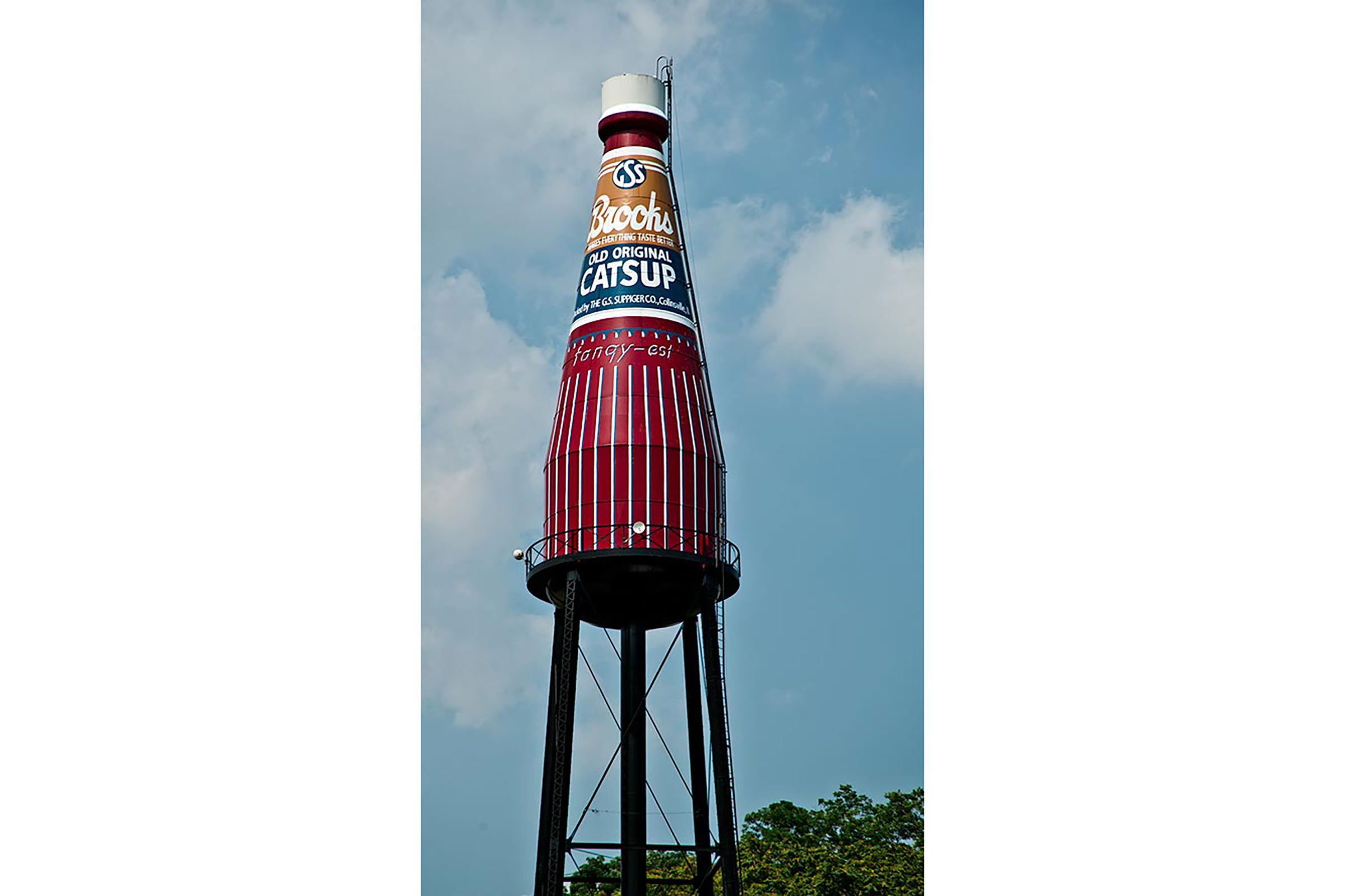 Whether you say “ketchup” or “catsup,” the home of the world’s largest bottle of the stuff is Collinsville, Illinois. Built in 1949, the bottle (actually, a water tower) is located at a now closed Brooks Foods plant. Don’t worry if you happen to get lost; it’s pretty hard to miss. It stands 70 feet tall on top of a 100-foot base. For more travel inspiration, check out the best family travel destinations in each state.

From their rare, beautiful mineral formations underground to the picturesque LaJolla Natural Park above ground, these caverns near Stanton, Missouri, will make you fall in love with nature. They gained popularity thanks to Lester Dill, who opened the caves as a tourist attraction in 1935. He invested in the most effective advertising of that time to draw in visitors: having his logo painted onto barns across the country and paying kids to put Meramec Cavern bumper stickers on every car in the parking lot.

What could be better after a long day of driving than watching a movie from the comfort of your own vehicle? The iconic 66 Drive-In Theater in Carthage, Missouri, has been running since it opened in 1949. Though movies (and ticket prices) have changed a lot since then, you can still see new releases for bargain prices at one of the most classic drive-ins in the country. Or skip the movie and look at these 8 favorite photos of Route 66 ghost towns.

Possibly the most notable stop in all of Kansas, the store doubles as a general store and a Route 66 gift shop. It started as Williams Store when Leo Williams opened its doors in 1925. Then it became the Eisler Brothers Old Riverton Store almost 50 years later, thanks to Joe and Isabell Eisler. Finally, the Eislers’ nephew Scott Nelson changed the name a third time. But not everything has changed. You can still see one of the store’s original outhouses on the property.

This roadside attraction may not be as vintage as others, but it certainly grabs your attention like one. In Arcadia, Oklahoma, travelers come to Pops to try one (or more) of its 700 flavors of soda and stay for the building’s architecture—a 66-foot-tall soda bottle illuminated with multi-colored neon lights.

It’s not surprising that Shamrock, Texas, pulls out all the stops for its annual St. Patrick’s Day celebration—there’s even a contest for the best beard—but the U-Drop Inn is a different story. Tourists from all over come to marvel at the Art Deco masterpiece, which was once a Conoco gas station and café. The structure reportedly got its name from a schoolboy who entered a naming contest back in its heyday.

Vintage cars are one of the best things we love about America. If you’re thinking that “Cadillac ranch” can’t possibly mean a literal ranch of Cadillacs, I’m a bit too happy to inform you that you are wrong. The Cadillac Ranch is an art installation in Amarillo, Texas, of old, painted Cadillacs half-buried in the ground at the same angle as the sides of the Great Pyramid of Giza. The brightly painted cars represent the gradual evolution of the car line. Once you’ve seen all these sights, make your next adventure one of these 11 unforgettable bucket list trips that won’t break the bank.

Tucumcari, New Mexico, has a lot to offer: a souvenir stand shaped like a teepee, a restaurant shaped like a sombrero, and the Blue Swallow Motel, a location you’ll definitely want to go out of your way to visit. The motel opened in the 1940s and continues to offer the same homegrown hospitality of its original owners—plus the giant neon “Motel” sign that lit the roads for travelers of old. For an extra touch of nostalgia, each room has a 1939 rotary-dial phone.

Built around 1927, the KiMo Theater is one of Albuquerque, New Mexico’s most well-known attractions. Its design, called Pueblo Deco, is meant to reflect the three major cultural influences of the area: American Indian, Hispanic, and Anglo. The interior does the same, with murals of Native American dance scenes, ceiling beams painted to look like logs, and rows of buffalo skull wall scones. To this day, you can still stop in to watch a movie, a concert, or theatrical performance. Popular attractions often get the reputation for being tourist traps, but there are 13 that are actually worth visiting.

You’re bound to run into some funny signs along Route 66, but few are as famous as the billboard for the Jack Rabbit Trading Post, which sports the silhouette of a jackrabbit and proclaims, “HERE IT IS.” In fact, there are signs all along Route 66 pointing to the convenience store outside Joseph City, Arizona. As the saying goes, “If you haven’t been to the Jackrabbit, you haven’t been in the Southwest.”

Just north of Dagget, California is an authentic Old West mining town, one of many hauntingly beautiful Route 66 ghost towns. Dating back to 1881, miners came hunting for silver while others looked for borax, an ancient mineral used for pottery glazing, fertilizer, and detergent. In Calico, you can tour a real mine, see original Old West buildings up close, and maybe even see a ghost. For more state facts, check out these 50 favorite facts about each of the 50 states.

If you need a break in Rialto, California, stop at the Wigwam Village Motel. It may not be one of the world’s most luxurious resorts, but you do get to sleep in rooms shaped like Native American teepees. There are other “villages” around the country in Kentucky, Louisiana, Florida, and Alabama, but the only other location along Route 66 is in Holbrook, Arizona.

For the final stop on Route 66, lather on some sunscreen and head out to California’s Santa Monica Pier. Although it’s technically not the end of Route 66, the pier is only blocks away and a much more exciting attraction. Originally constructed in 1908, pier attractions now include a nine-story Ferris wheel, a five-story roller coaster, and tons of carnival games. California is also home to one of the 11 affordable US cities you’ll want to visit this year.

via Amazon
Ready for more adventure?

Pick up Route 66 Adventure Handbook by Drew Knowles for maps, travel tips, and more roadside attractions to help you get all your kicks along historic Route 66. And don’t miss these bucket list ideas for each of the 50 states.

Disclosure: We may earn a commission for purchases made through our links.