There's more than meets the eye when it comes to these well-known statues and artistic creations. Here's how a faulty translation, artistic rivalry, and more left their mark on famous works of art. 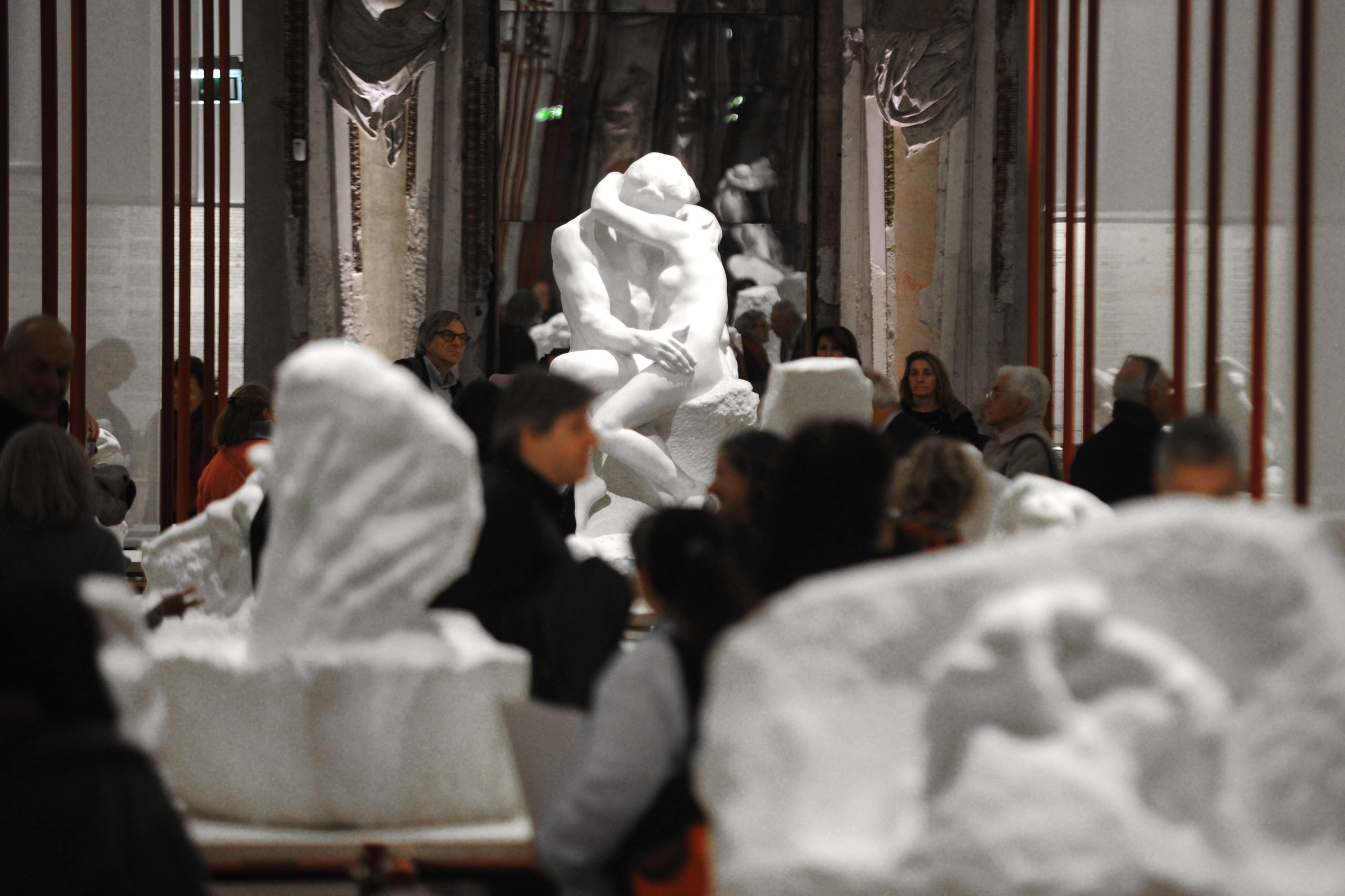 A breathtaking—or just cool and funky—sculpture can leave a lasting impression even on those of us who aren’t big art enthusiasts. Sculptures and statues can provide a fascinating insight into the time they were made. And sometimes, they contain little “secrets”—details that reveal the mind of the creator, or just make them that much cooler. From Christ the Redeemer to the David and beyond, here are some little fun facts that’ll make you view these works of art differently. Plus, learn about 10 hidden messages in famous paintings, too. 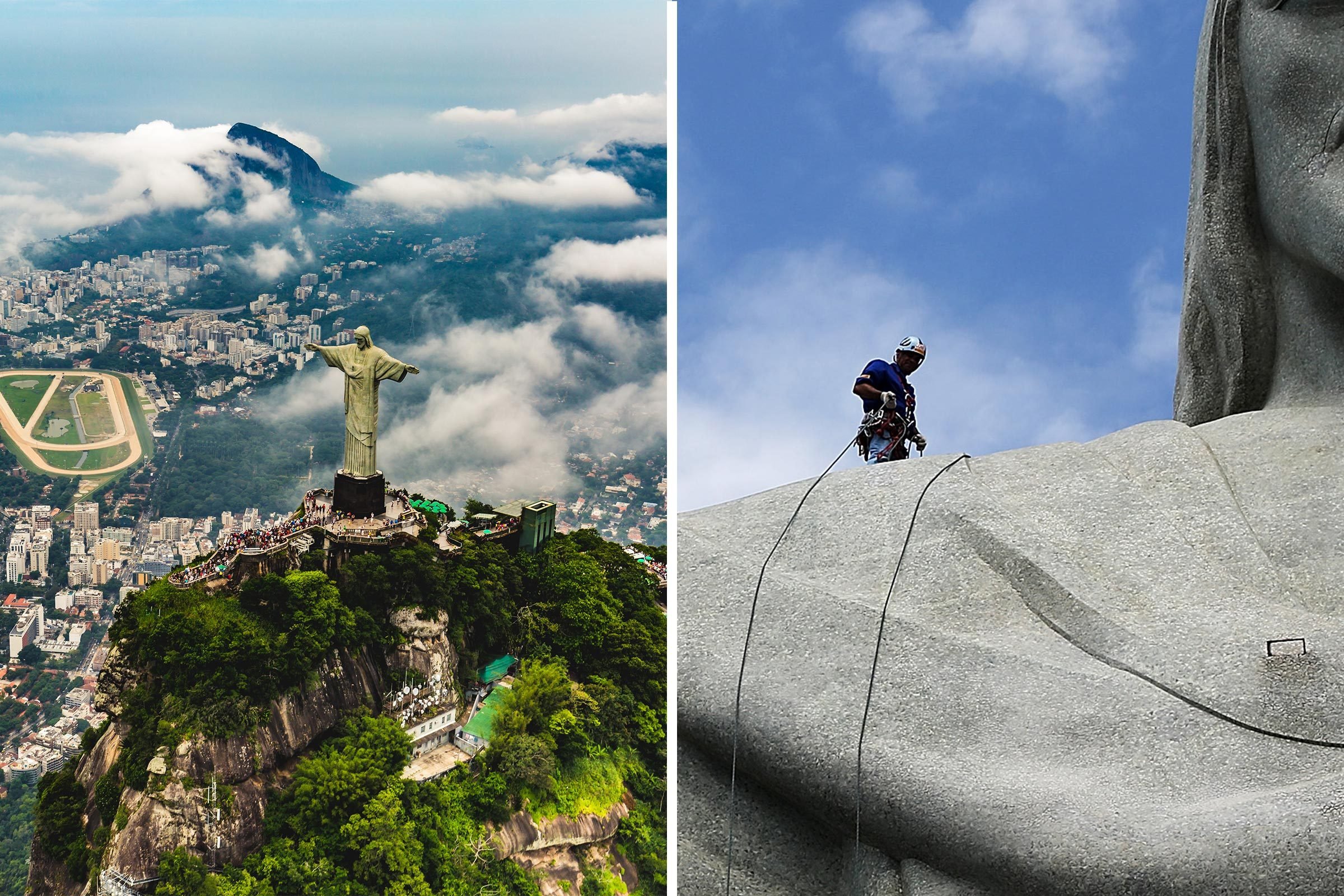 This massive statue of Christ in Rio de Janeiro, one of the New Wonders of the World, is filled with fun secrets and messages. In fact, it likely literally contains many hidden messages. The statue itself is concrete, but the exterior is made of millions of soapstone tiles. Some of the volunteers who helped attach them wrote little notes, signed their names, or even made wishes on the back, according to the BBC. Just as cool, the statue actually has a trapdoor in it! The statue has an access tunnel for maintenance workers, where stairs go all the way up through the center of the statue. On Christ’s right shoulder, there is a trapdoor where workers can climb out to repel down and inspect lightning damage. Check out these incredible photos of famous monuments under construction. 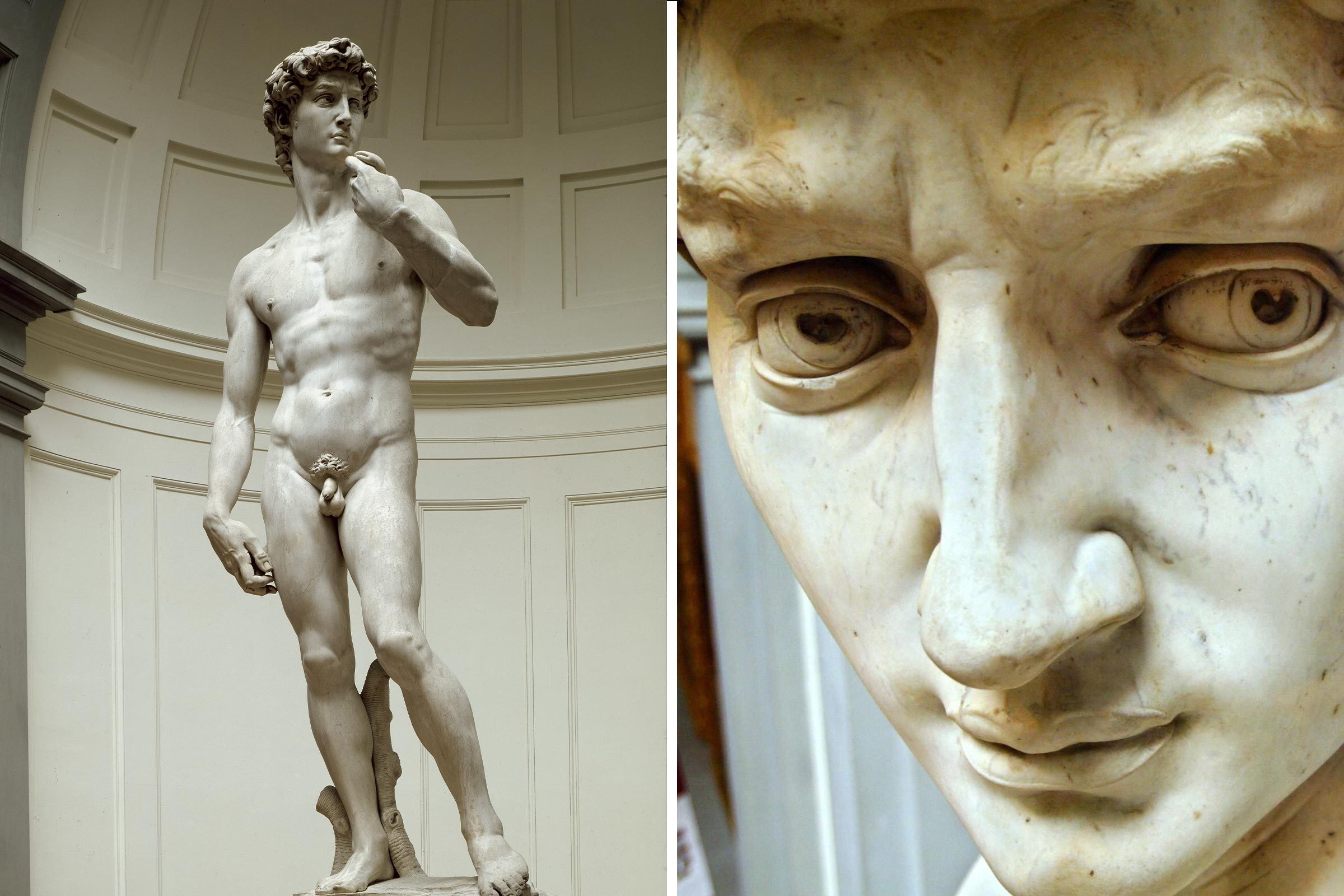 One of the most famous statues in the world, the David resides in Florence’s Galleria dell’Accademia. He stands ready to take on Goliath, and the consensus is that he was sculpted to be a “perfect male specimen.” And yet close observers have noticed that the statue has what seems to be a flaw: His eyes look in two slightly different directions. (It’s virtually impossible to spot when he’s on his pedestal.) While the left one looks directly at the viewer, the right one seems to gaze at a distance beyond the viewer. It’s been debated whether or not it’s a mistake, but plenty of scholars think it’s because you can’t see both eyes at a time as you walk around the statue. So Michelangelo made sure that David’s gaze was as impactful as possible from either side. That Michelangelo; he thought of everything. David is pretty darn popular, but get a look at some creepy attractions that are off-limits to tourists. 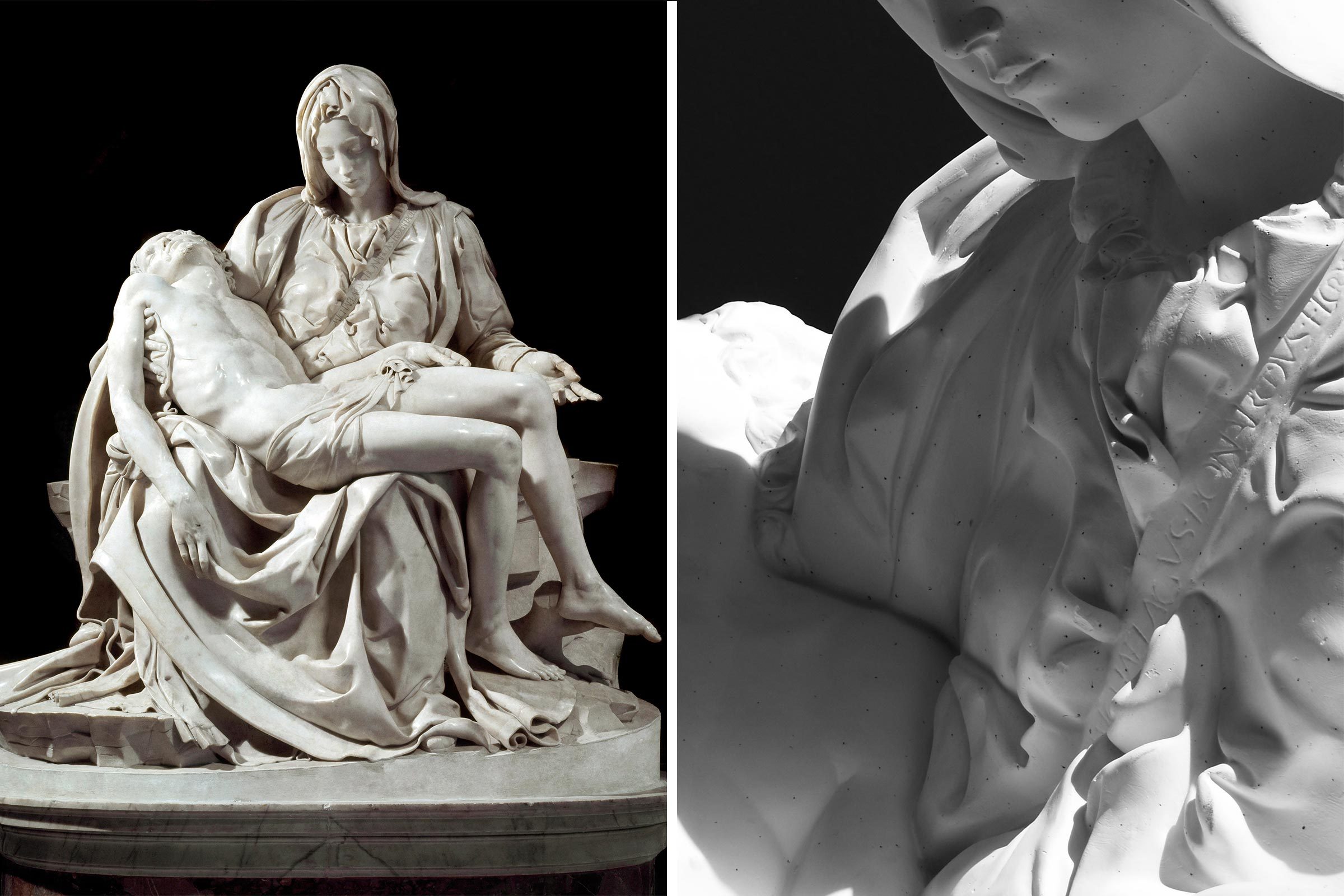 OK, this is more like the opposite of a secret message—it’s the only piece of his artwork that Michelangelo actually signed! He reportedly heard that the depiction of Mary holding the body of Jesus was being attributed to a rival artist. Unable to stand for that, he added his name, to the strap across Mary’s torso. The inscription says “Michala(n)gelus Bonarotus Florentin(us) Facieba(t),” or “Michelangelo Buonarotti, the Florentine, made this.” Check out some incredible artwork people made while in quarantine. 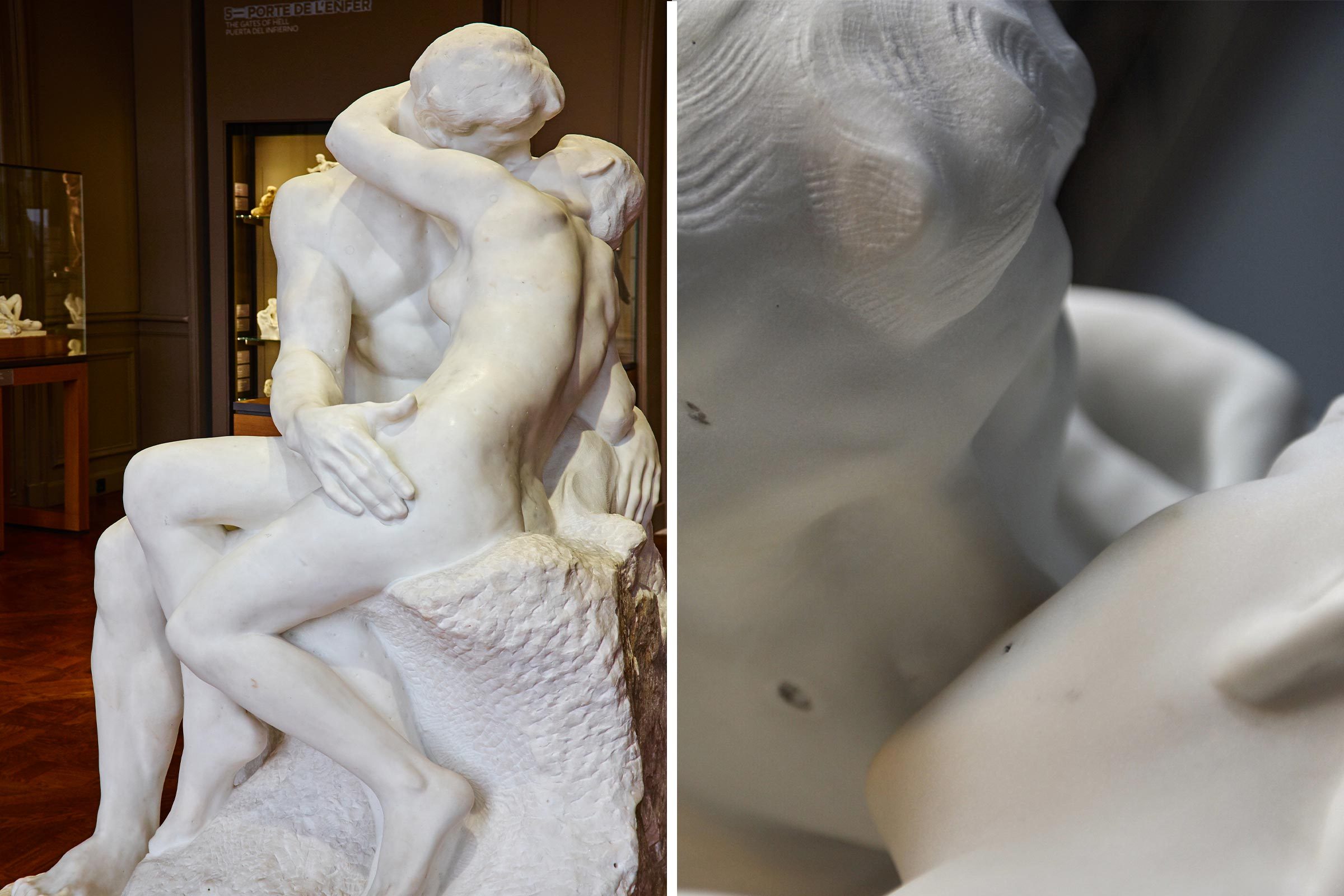 This statue by Auguste Rodin is actually a misnomer! The Kiss was inspired by a tale from Dante’s Inferno in which a noblewoman falls in love with her husband’s brother; the lovers are killed by the cheated husband. In 1882, Rodin chose to depict the lovers in their moment of passion. Though it’s basically imperceptible, the lovers’ lips aren’t actually touching in the statue, suggesting that they never actually committed an act of adultery before being caught. (Because that would really make this statue scandalous!) These are 10 of the most controversial statues and monuments around the world. 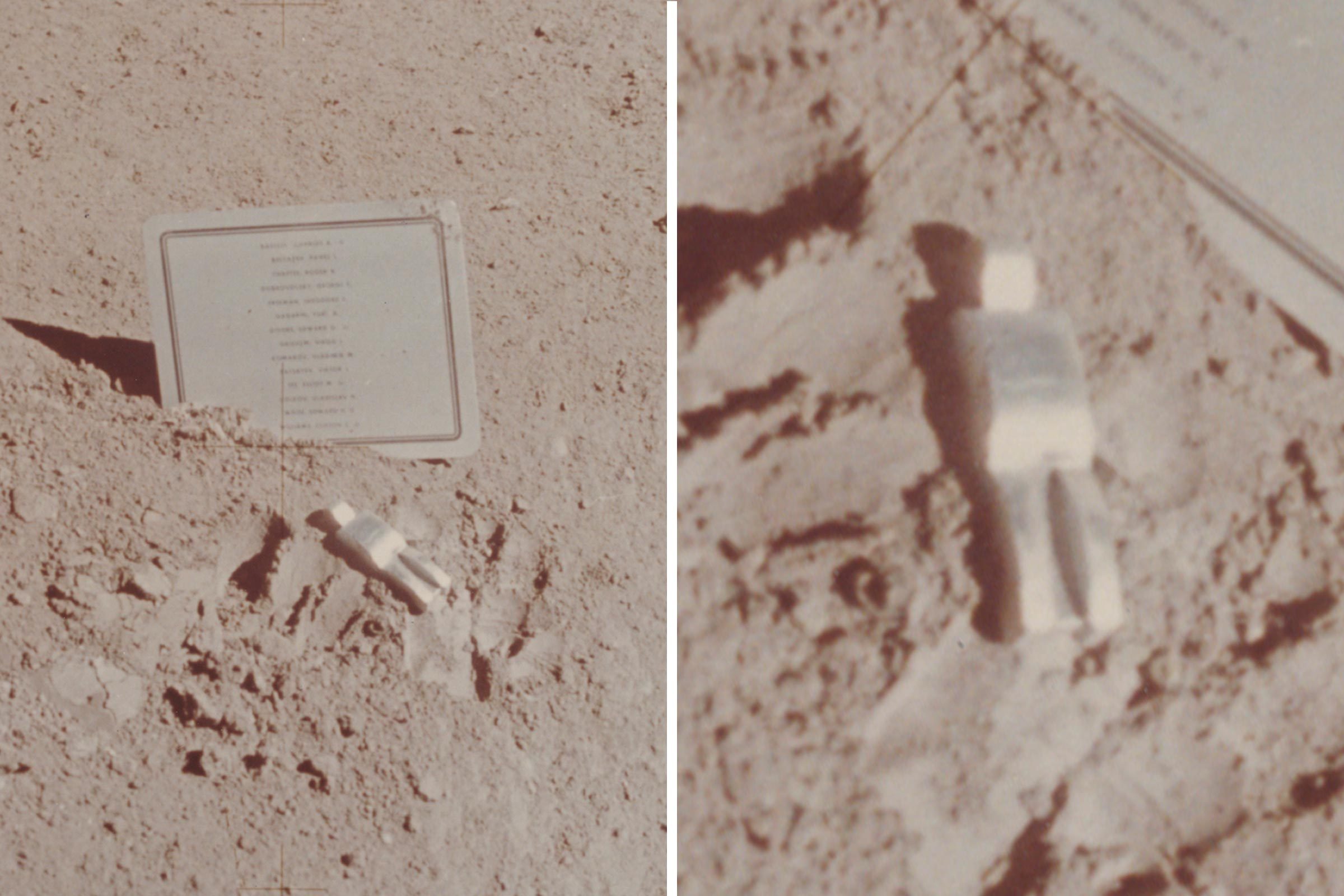 This is less a “hidden message” than a dispute of authorial intent. In 1971, Belgian artist Paul van Hoeydonck created a work that would be the first piece of art placed on the moon. It was a three-and-a-half-inch-tall aluminum sculpture, representing an astronaut. The astronauts of Apollo 15 would bring it on their mission and put it on the moon. And they did—but not the way van Hoeydonck had envisioned. They laid a plaque, carved with the names of 14 astronauts who had died during space missions, on the lunar surface. They placed van Hoeydonck’s sculpture by it, also lying flat, and dubbed it “Fallen Astronaut.” But van Hoeydonck has not been shy about the fact that that was not what he intended for his creation to symbolize at all. He wanted his miniature spaceman to stand up straight and be called “Space Traveller,” representing all astronauts, past, present, and future—not specifically a memorial to fallen ones. Incorrectly interpreted art is just one of the unusual things humans have left on the moon. 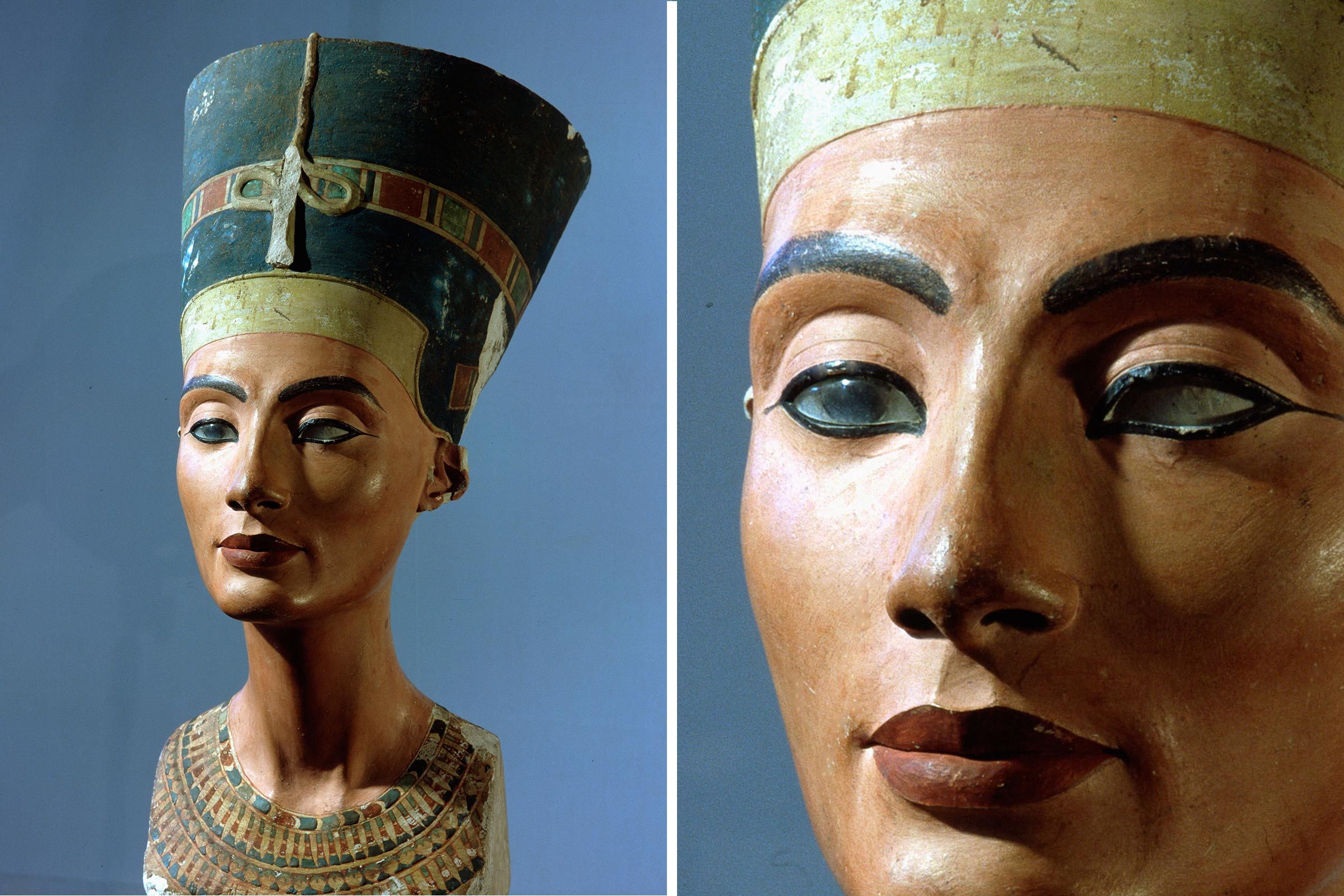 This bust, a depiction of the wife of the Pharaoh Akhenaten, was likely created by the sculptor Thutmose around 1345 BC. (It was discovered in his workshop in 1912.) In addition to its striking colors and fastidious detail, another thing viewers instantly notice about the bust is its missing left eye. Her left eye socket is just blank and empty! Many scholars have puzzled over the reason why, but one thing they know for sure is that the eye isn’t missing; it was never there in the first place. Despite conducting a major search, researchers were never able to find a lost eye, and, in fact, there are no traces of any adhesive that would’ve held it in place, leaving them with one conclusion: There was never any left eye to begin with. The reason why is anyone’s guess, but we do know it’s not because the real Nefertiti was missing an eye or had any ocular conditions. Plenty of other depictions of her show her with both eyes. Learn about more of the strangest unsolved mysteries of all time. 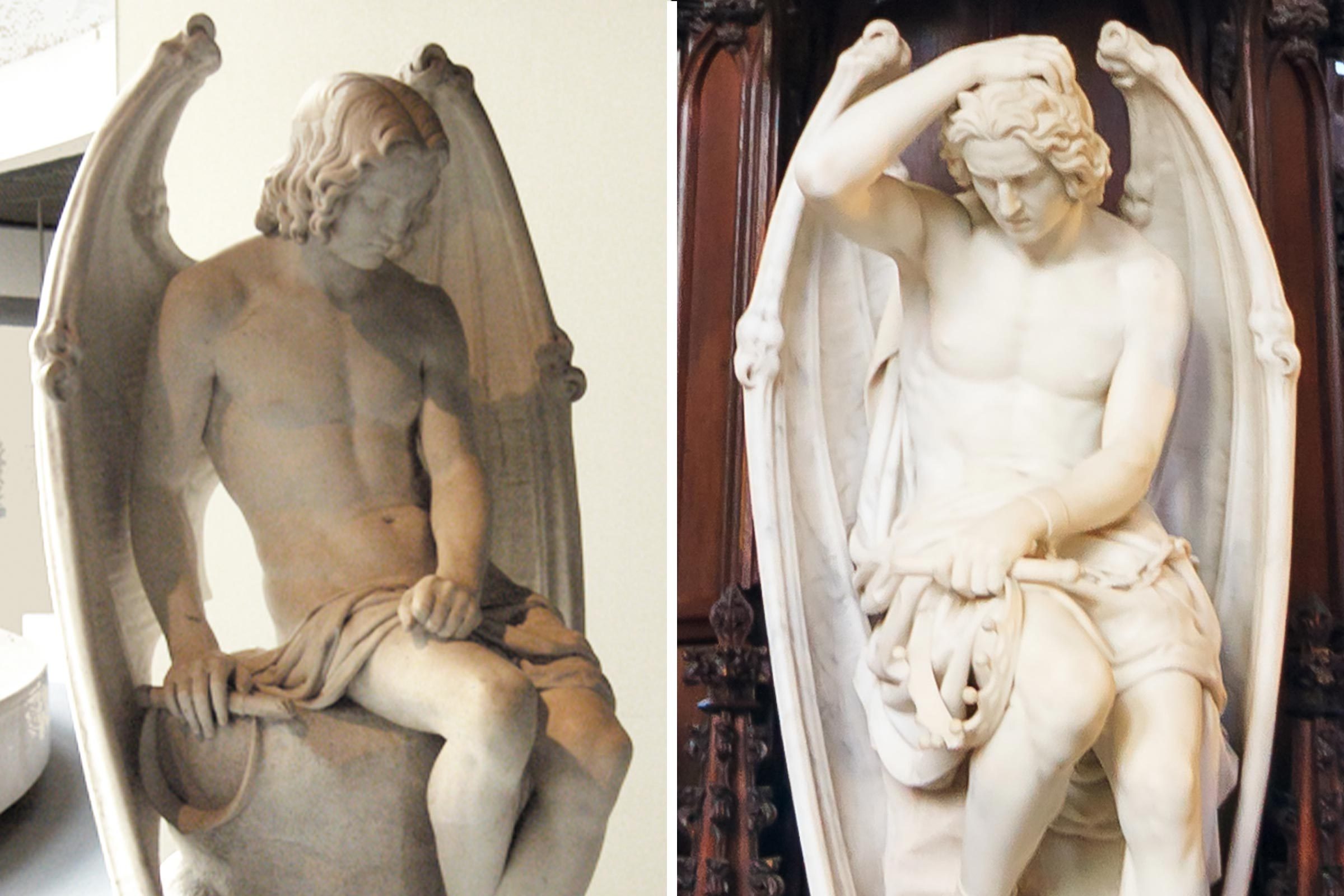 The Genius of Evil

In the mid-1800s, sculptor Joseph Geefs got the gig of a lifetime. He was to create a statue of the fallen angel Lucifer (aka the Devil) for St. Paul’s Cathedral in Liège, Belgium. And he did—but his depiction, called The Angel of Death, ruffled some feathers. Sure, Lucifer had wings and a serpentine companion, but the powers that be found him too alluring. And that was not a message the church could be promoting. So after just a year on display in the cathedral, Joseph Geefs’ sculpture was removed, and the church turned to none other than his brother, Guillaume, to make another. Guillaume’s version of Lucifer, finished in 1848, looks decidedly more tormented, and the sculpture contains more overt references to suffering. These hidden messages include a broken scepter, chains, and an apple sans one bite. Though The Genius of Evil, which resides in the cathedral to this day, is still…far from devoid of sensuality, it appeased the church officials. (We can’t help but wonder how they’d feel about the Netflix show Lucifer.) 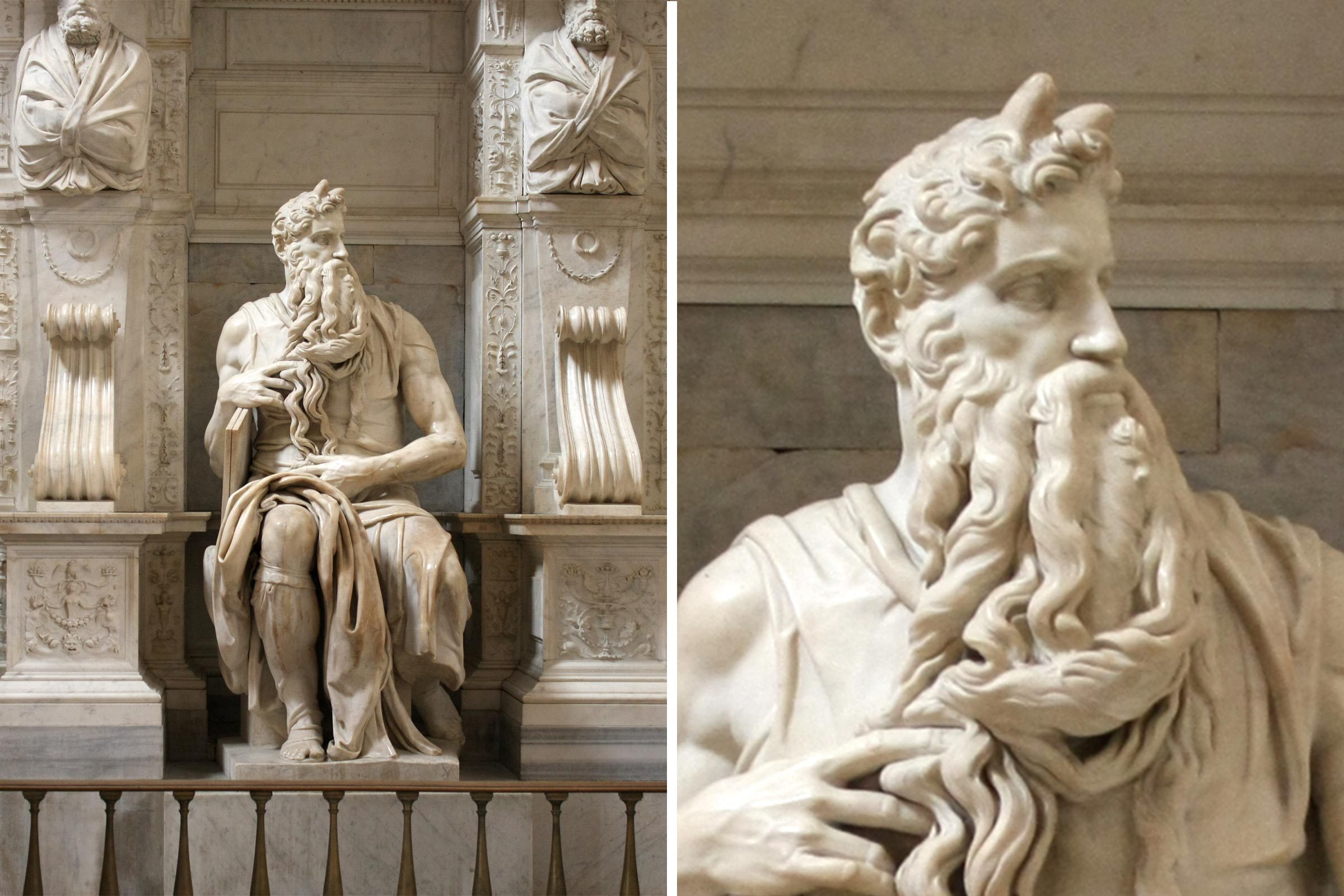 You can’t win ’em all, Michelangelo. The 16th-century Florentine’s depiction of Moses has a pretty noticeable quirk: Moses has horns. This is because of a tricky Biblical translation: The Hebrew word that describes Moses’ face as he descended Mount Sinai is now known to mean “radiance” or “rays of light,” but it’s very similar to a word that translates to “horns.” So instead of emitting radiance, this version of Moses has horns on top of his head. Oops. (Hey, at least Michelangelo didn’t sign that one…?) In fairness to Michelangelo, many people at that time accepted the errant translation as fact; it wasn’t a mistake he himself made. Check out these other hilarious errors in famous monuments. 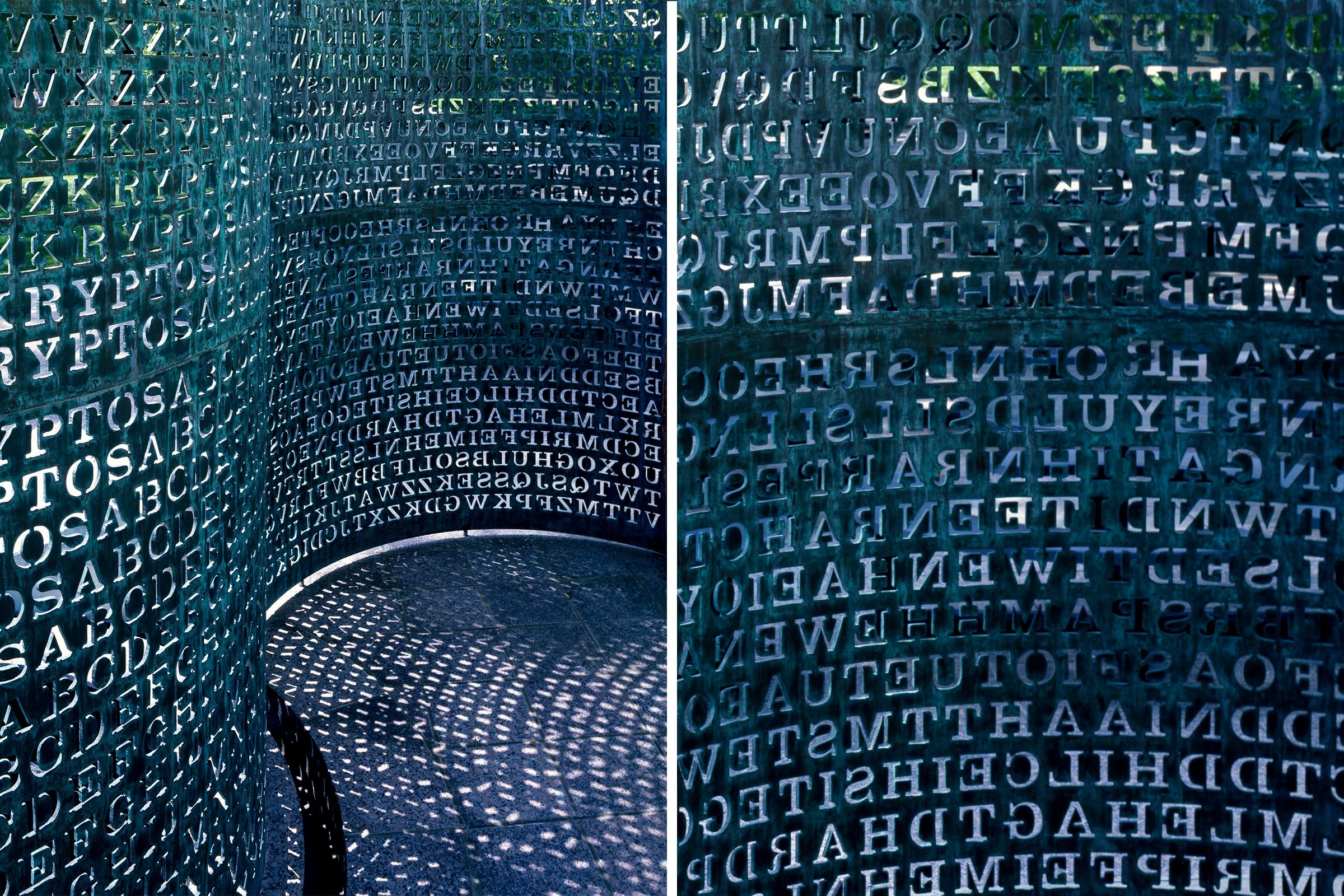 And now for something a little more modern. This 1990 sculpture by Jim Sanborn sits at the CIA campus in Langley, Virginia, and contains four different codes within its array of jumbled letters—much more literal hidden messages! Within the decade after the sculpture’s debut, multiple people, including a California computer scientist and an analyst of the CIA itself, announced that they’d solved three of the coded passages—all the same three passages. The three passages that have been solved are, unfortunately, not the most mind-blowing. One is a line of poetry by the sculptor; another references something that has been buried, complete with coordinates; and the third is the words of the archaeologist who discovered King Tut’s tomb. The fourth, though, remains unsolved, as far as anyone knows, and presents an alluring challenge to codebreakers. Next, check out these fascinating unsolved mysteries of the art world.