You're in a grocery store almost every week: How much do you know about what goes on in those aisles? These are the things your grocer would prefer to keep secret. 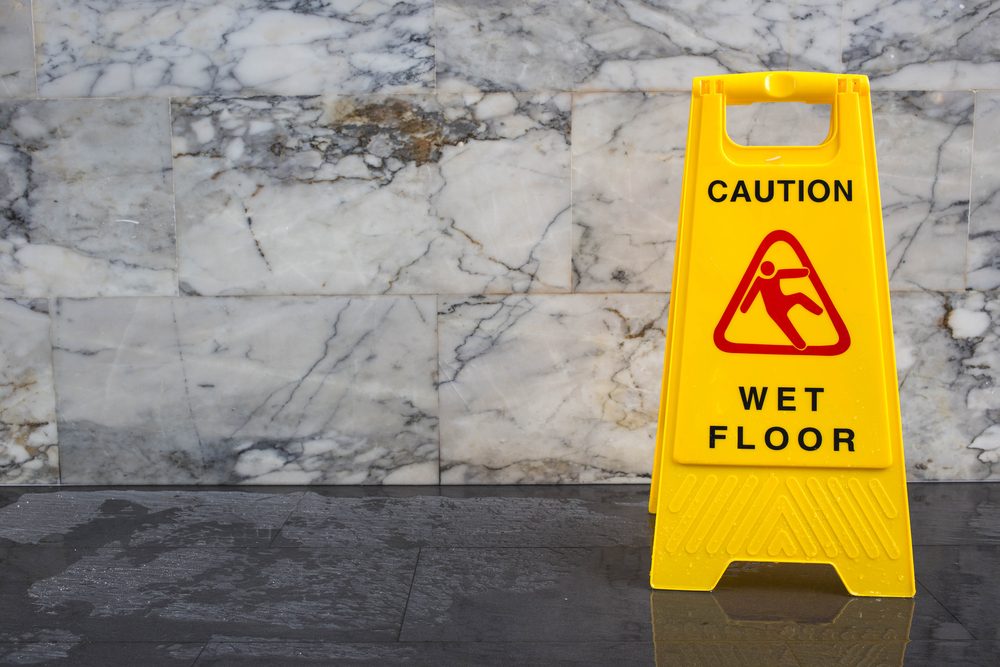 They can be filthy

Your preferred market may appear well maintained—and it probably is. But considering how many shoppers shuffle through each department daily and handling the merchandise, the store is also a breeding ground for germs. “There is more than one reason why we’re all taught to wash off our fruits and veggies before eating them,” says Sam Morrison, a health and wellness expert for Glacier Wellness. “For starters, fresh produce is often handled by hopeful consumers to test for freshness. Besides removing pesticides, washing these items is a necessary step to clear the produce of countless microbes transferred from the hands of shoppers.” 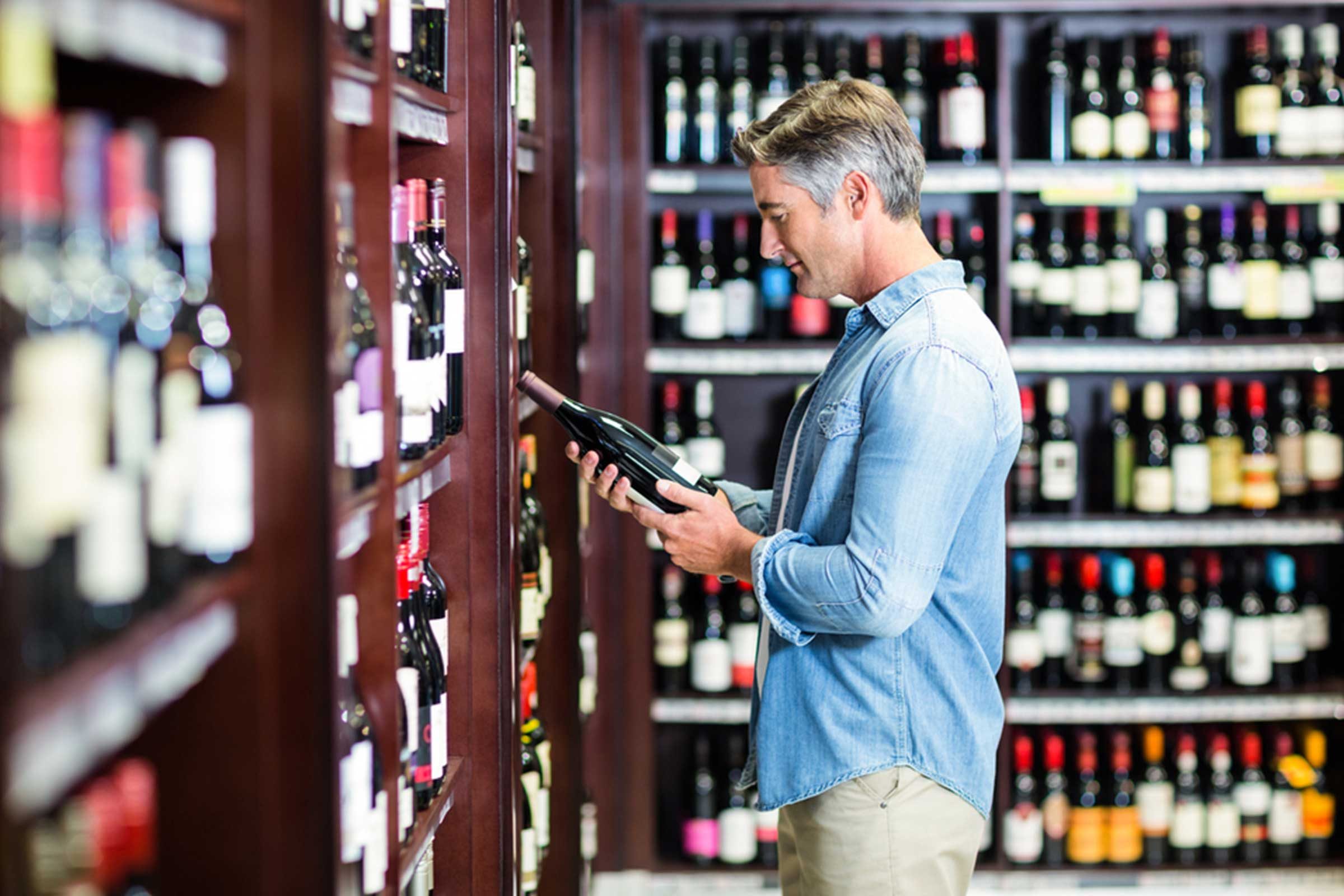 Placement can be purchased

Eye-catching displays or prominent placement in stores may look like a store is really behind a particular product, but those spots have been paid for by food manufacturers. “As someone who helped get products into grocery stores,” says health and wellness expert Elaine Wilkes, “a secret is that spaces and marketing dollars are paid for. For instance, end cap displays are purchased. Marketing dollars and demos are greatly encouraged. So, it may not be the product with the most taste or health, but the product with the most money.” Check out how you can save money at the grocery store. 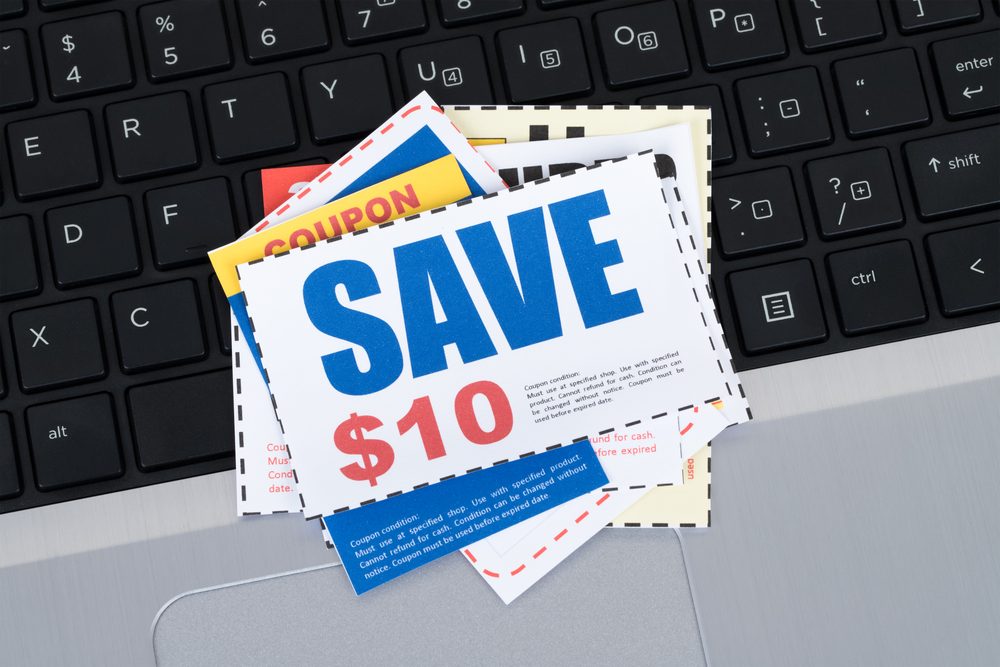 Thrifty shoppers love a coupon but read the fine print. “When you walk the aisles, you’ll likely notice the brightly colored store coupons affixed to the shelves,” says Kristin McGrath, editor and savings expert for Offers.com. “Scrutinize these carefully. Buy-one, get-one-half-off (or some other discount) coupons are often just a ploy to get you to buy something you weren’t even shopping for. Automatic-discount coupons are a better bet. Getting a discount on a pricey name-brand item may still cost you more than a comparable off-brand item hidden a few shelves below.” 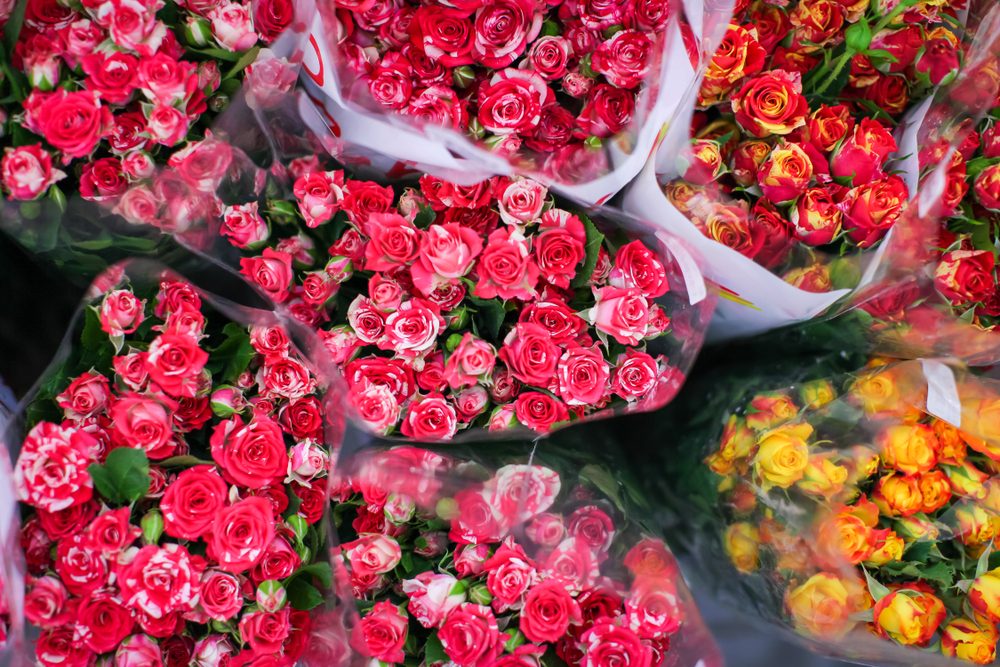 “The floral section is often placed at the front of the store to encourage impulse buys of fragrant bouquets, adorable potted succulents, and other gifts,” says McGrath. “If the store can get you to place one of these items in your cart first—before you even start ticking items off your shopping list—chances are you’ll end up buying it. So tune out the entire section, unless you are shopping specifically for flowers.” These grocery shopping mistakes are wasting your money. 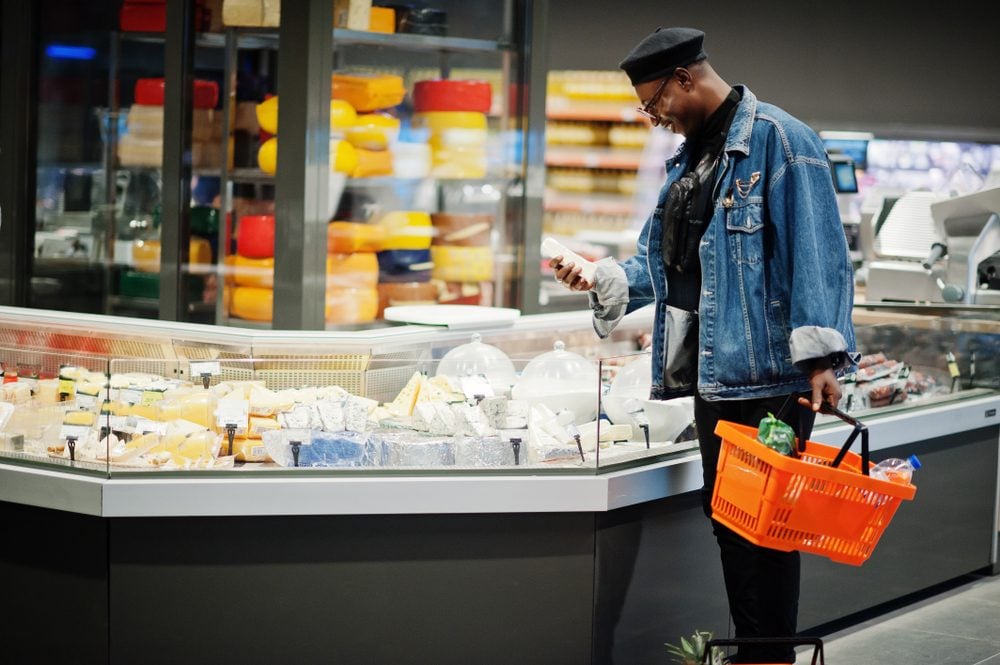 Price matching can pay off

Stores don’t often shout their price matching policies from the rooftops, so it pays to inquire with the market you most frequently shop. “If you buy groceries at Walmart or Target, take advantage of this little-advertised benefit,” says McGrath. “Both stores will match prices listed on their websites if the online price is lower. Just note that the brand, quantity, and other details must match perfectly. It’s easy to prove that the online price is lower. Just show the cashier the online price on your phone and ask for a price match.” 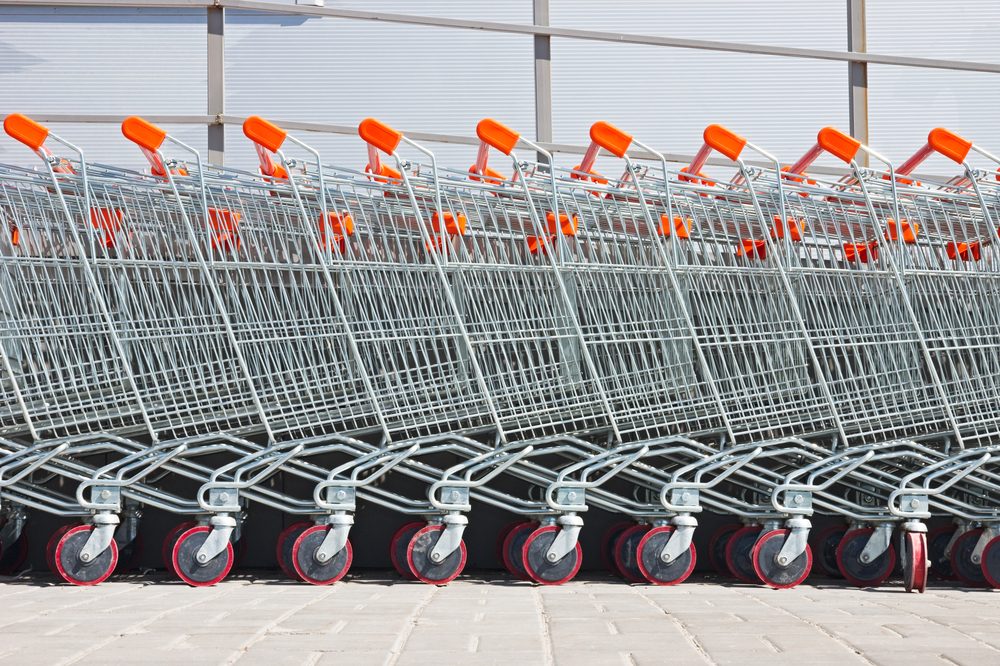 Try as you might to eat everything in your fridge, a 2018 study by the European moving company Movinga shows that Americans have the highest level of food waste in the world. They estimate that 24 percent of our weekly grocery purchases end up in the trash. In a business with low-profit margins to begin with, grocery stores count on shoppers to purchase more than they will actually use. Find out which non-food grocery store items you should be buying. 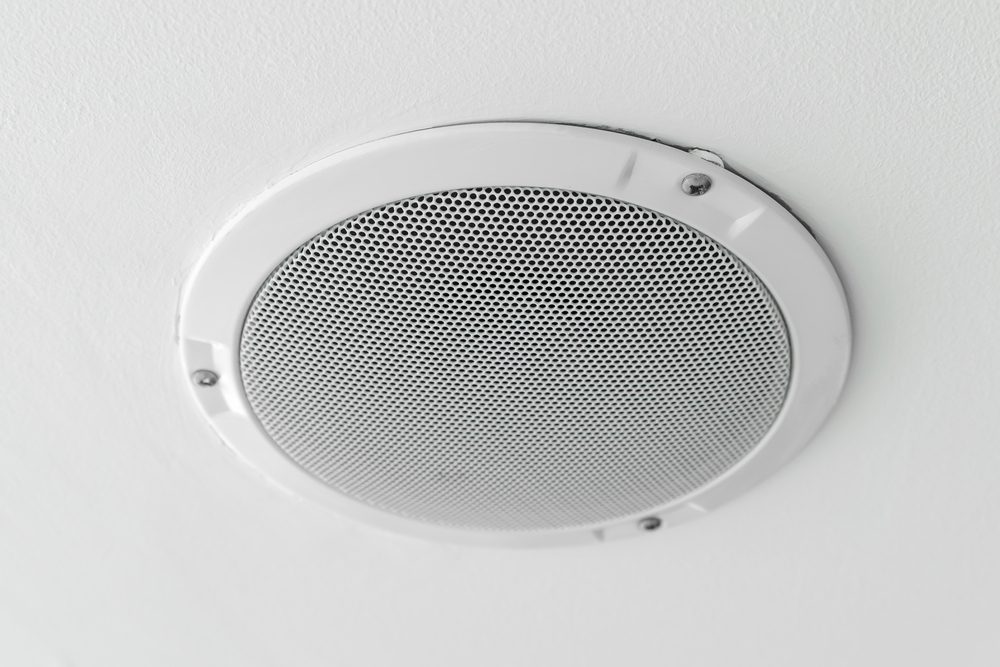 Background music plays a role in your shopping

Depending on the store you shop, music is used to play a subliminal role in your purchase choices. According to a study from the University of South Florida, loud music played in groceries leads to unhealthier food choices. The idea is that louder tunes stimulate stress, and that can drive impulse buys. 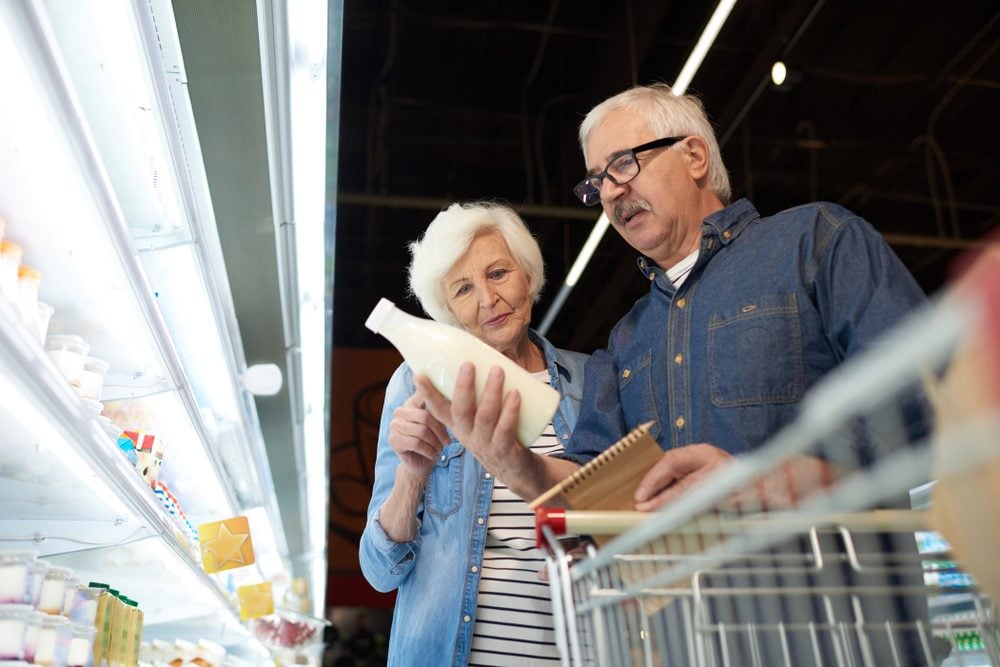 Their sales cycle is predictable

The sales you find in your weekly grocery store flyer are no accident. Items are put on sale at scheduled times based on seasons, holidays, and other annual benchmarks. “If a consumer is looking to stock up on vegan plant-based milk, they would want to wait until Earth Day in April when all things organic and vegan are marked down to $1.99 or less as opposed to $3.99 or higher,” says shopping expert Joy Hearn of Cards and Clips. Read about these smart ways to save at the grocery. 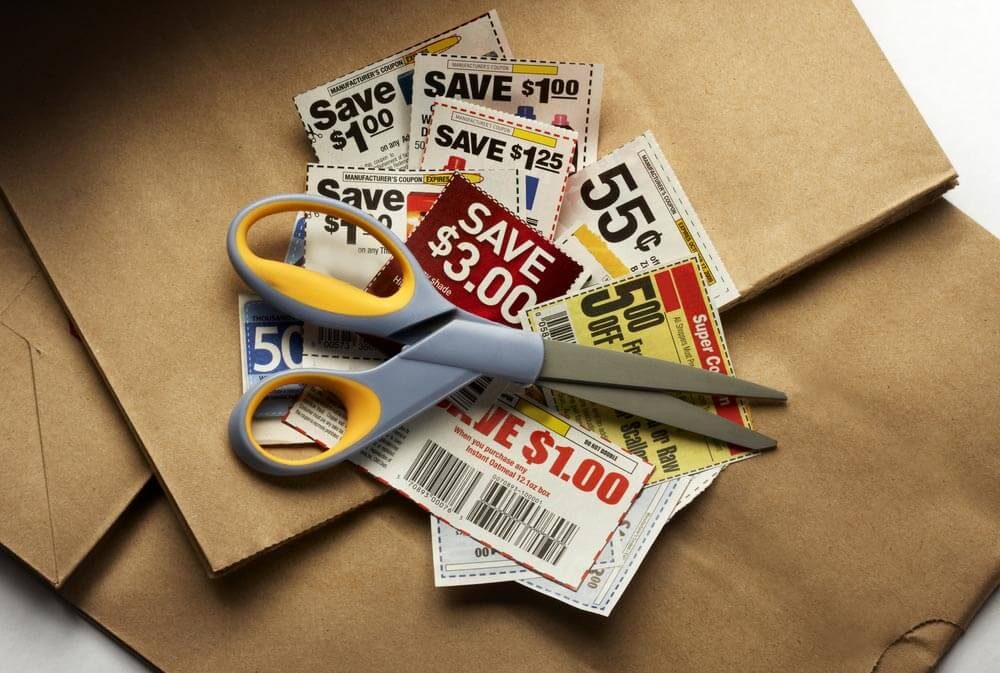 Hold on to expired coupons

If you’re a newspaper coupon-clipper, you may discard the expired ones. Hang on to them, instead, says Hearn: “Many grocery stores will accept expired coupons.” 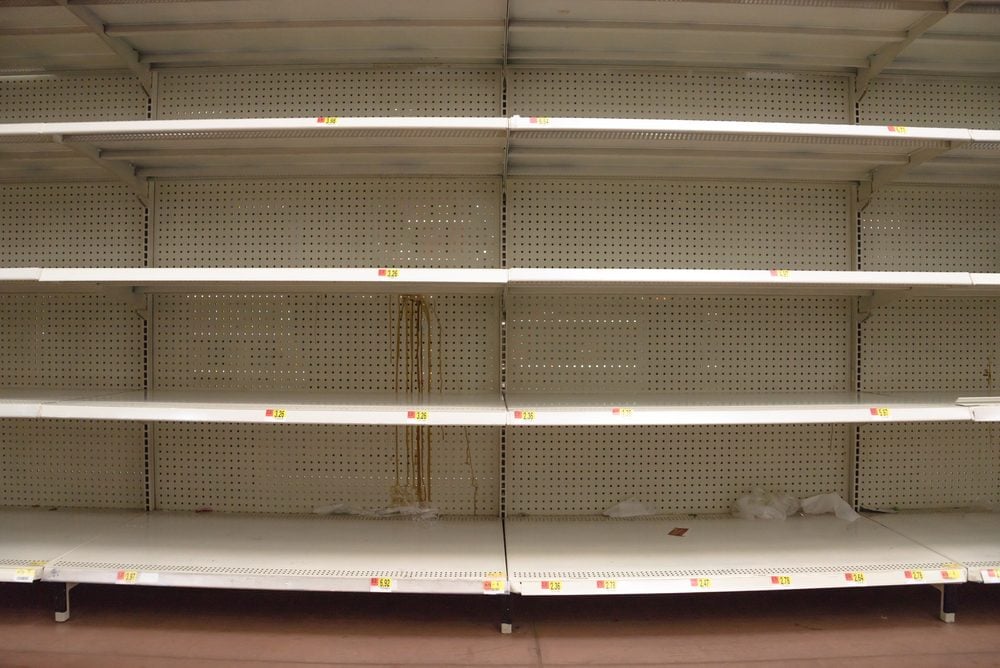 It’s frustrating to find a bare shelf during your weekly bargain hunting at the grocery store, but that doesn’t necessarily mean you’re out of luck. “Nine times out of ten, grocery stores will offer consumers rain checks,” says Hearn. “What the stores won’t do is volunteer the number of rain checks you can get. While most of the time it is at the manager’s discretion, many grocery stores will allow consumers up to five rain checks for a specific sale item.” 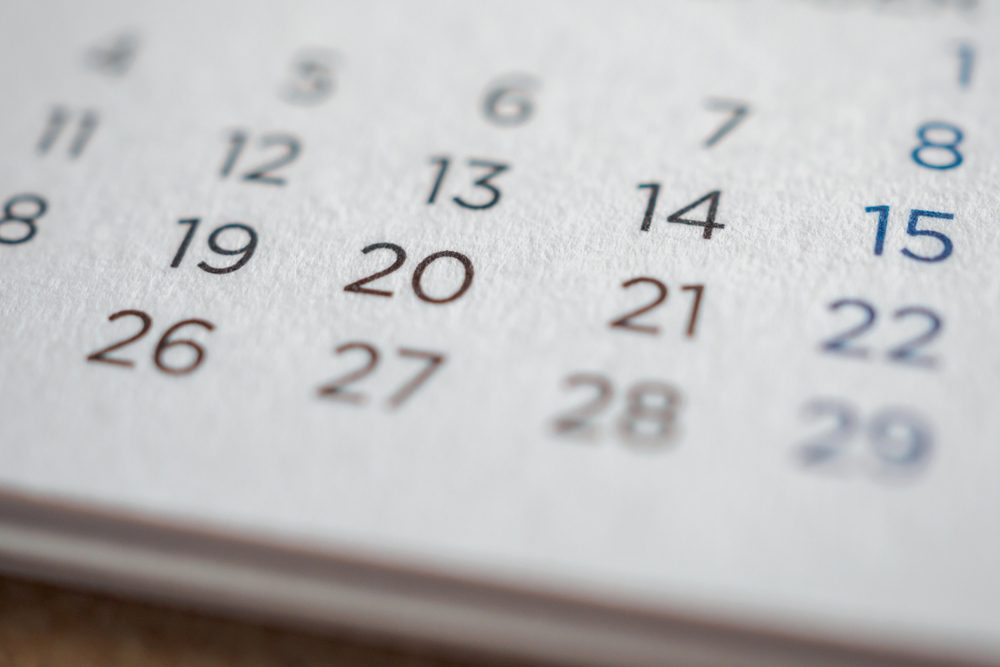 Sales start mid-week for a reason

It may seem odd for a new batch of grocery deals to turn up on Wednesdays, but the reason is to lure savvy shoppers in when store traffic is minimal. Mid-week tends to be the slowest for sales, according to 2008 data from The Time Use Institute, and Saturday is usually the busiest day of the week. Unless you’re confident you can get a raincheck on a coveted item, head to your store of choice within the first two days of a sale. These are grocery store shopping secrets everyone should know. 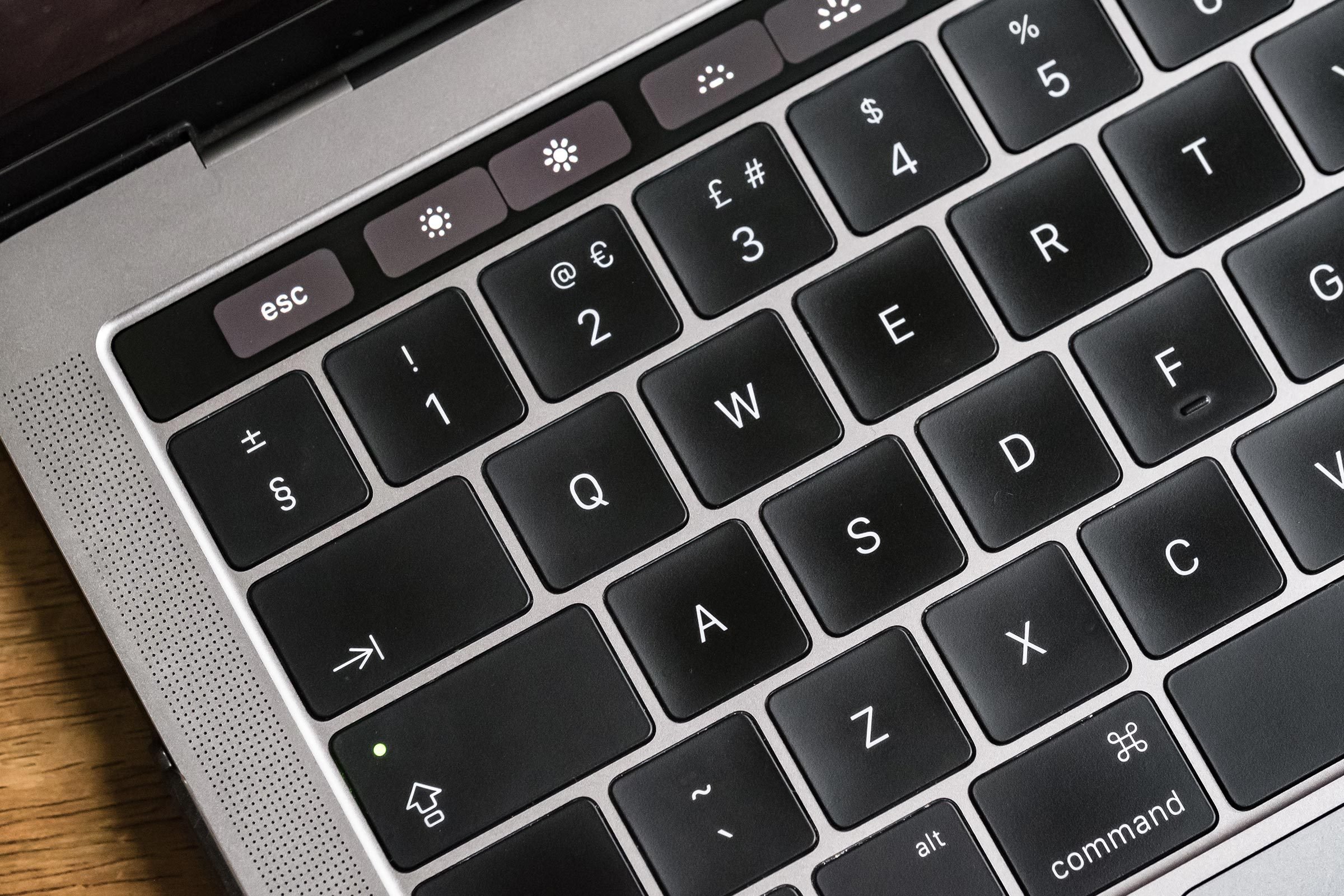 Online shopping comes at a premium

When you’re pressed for time, ordering groceries online can feel like the greatest gift technology has to offer. Even if the prices online are the same as in-store, consumers are still likely to spend more money in an effort to hit a minimum order for delivery. You’re liable to throw extra items in that virtual cart than you would if you were physically pushing one through the store. 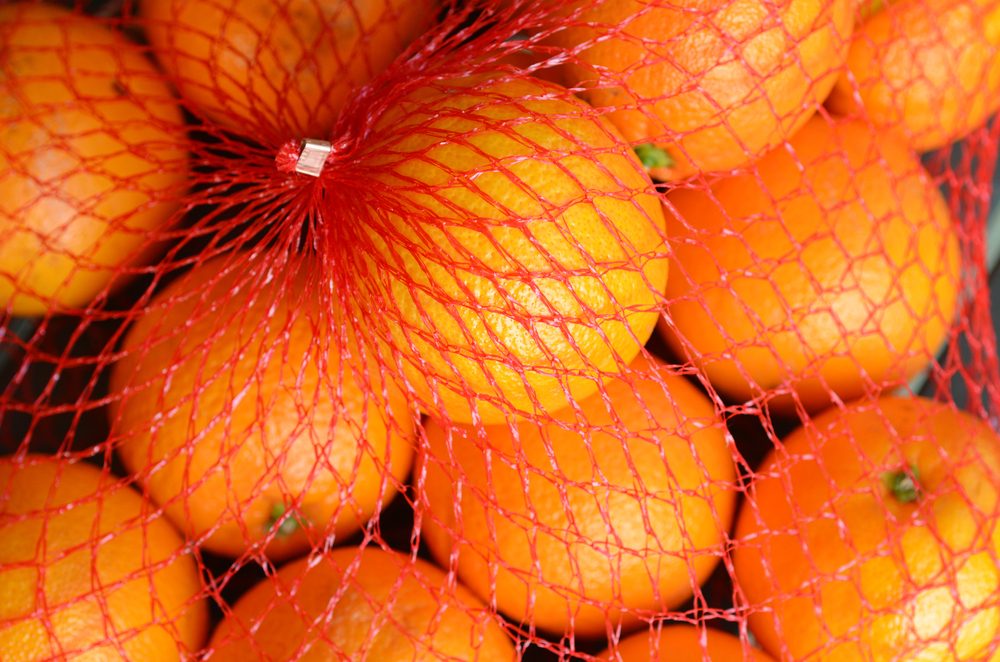 When a low price-per-pound sign jumps out at you in the produce department, you might assume you’ll save by choosing your fruits and veggies from those bins. However, the pre-packed bags of potatoes, oranges, and onions might be the better deal. If math isn’t your strong suit, use the calculator on your phone to calculate how much five pounds of an item will cost and compare it to the packaged bag. Find out which grocery store has the worst reputation in America. 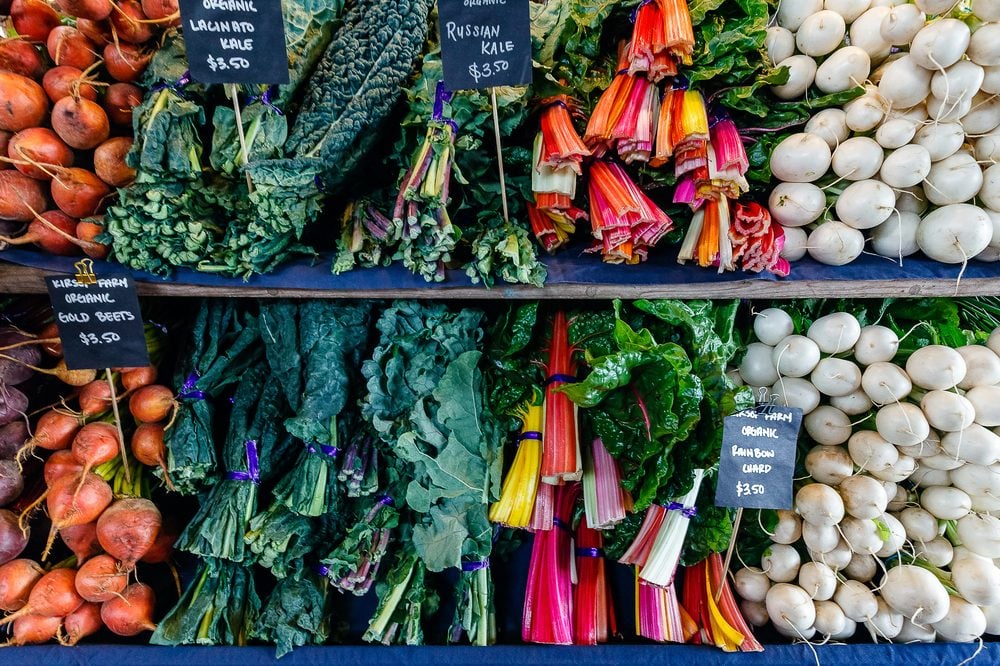 If you’re puzzled why the same item can be priced so differently at different stores in your town, there’s an explanation. According to The Kitchn, stores have different deals with distributors. Some must pay list price, while others will get discounts because they’re able to order a larger volume. 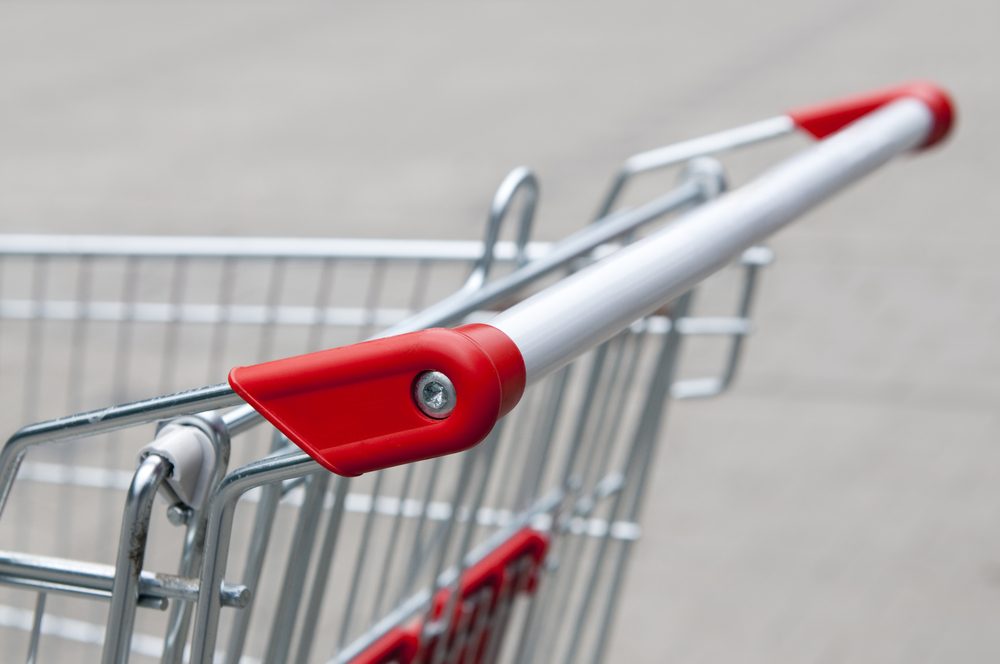 If your store puts sanitizing wipes near the grocery carts for shoppers, go ahead and give the cart handle a good wipe. An experiment conducted by news station KFVS 12 and Southern Illinois University’s Department of Microbiology found plenty of germs lurking on carts, such as fungus, staph bacteria, and even fecal matter. They also conducted a test to see if the sanitizing wipes really do help clear away the baddies. The result? They do, but not entirely. So it’s best to wash your hands when you return from the store. Read more about why you really need to clean your grocery cart. 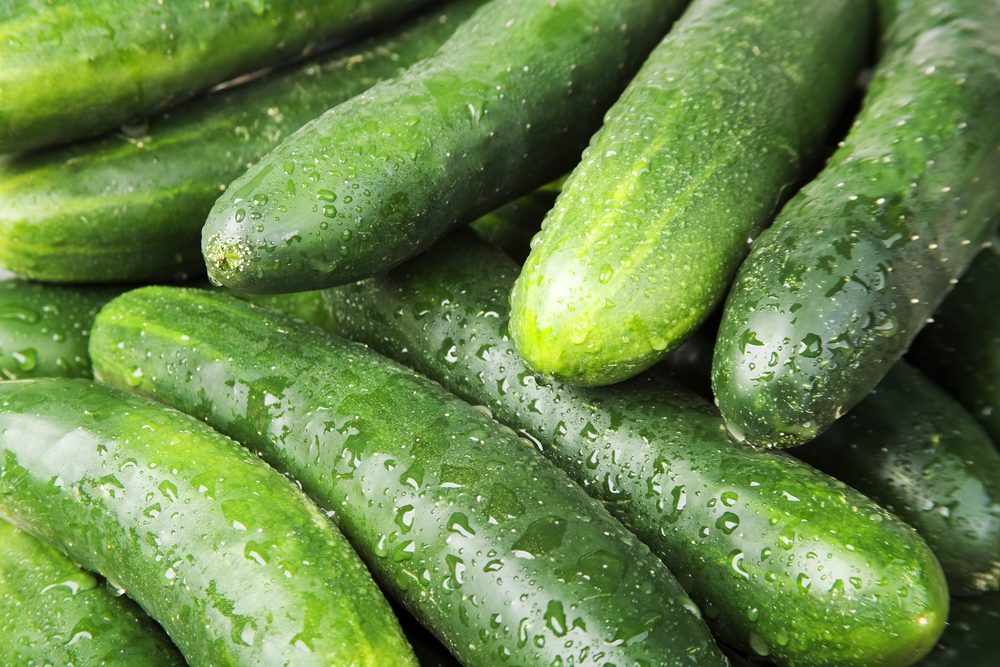 Most produce departments have a misting system, though you might be surprised to learn why: Martin Lindstrom, author of Brandwashed: Tricks Companies Use to Manipulate Our Minds and Persuade Us to Buy told National Geographic that these misters are nothing but a trick to make produce look fresh and clean. In actuality, the spray makes veggies spoil more quickly. 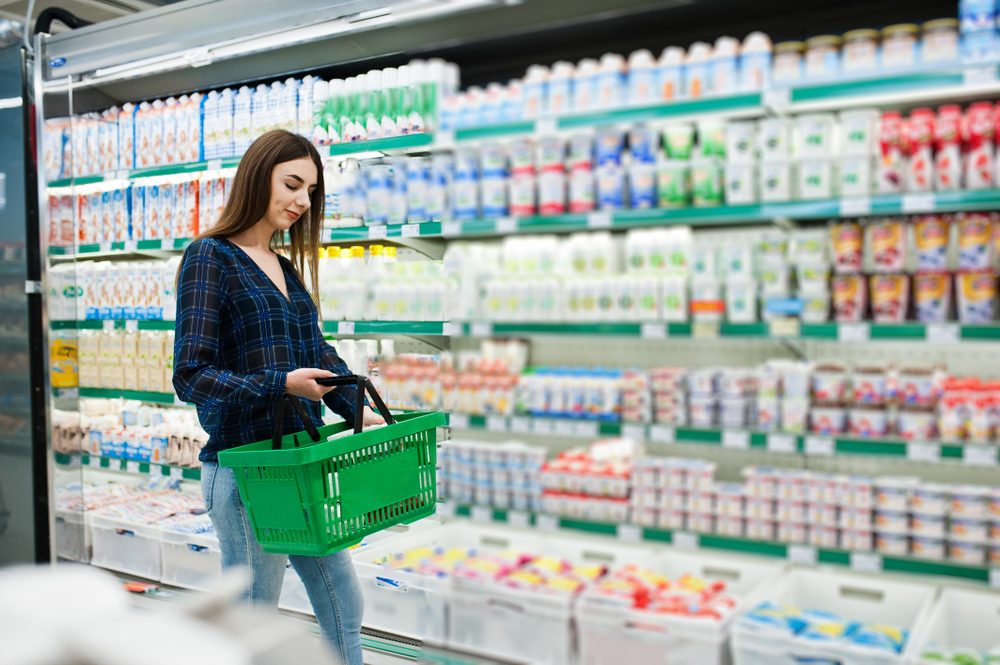 Find the dairy section in the back

Need milk? Eggs? Butter? The store is counting on it, and that’s why the dairy section is all the way in the back. That forces you to traipse up and down aisles by a lot of other tempting choices to get your dairy items. The store managers are hoping you’ll pick up more than a few unplanned purchases on your way there and back. Find out which supermarket tricks you’re still falling for. 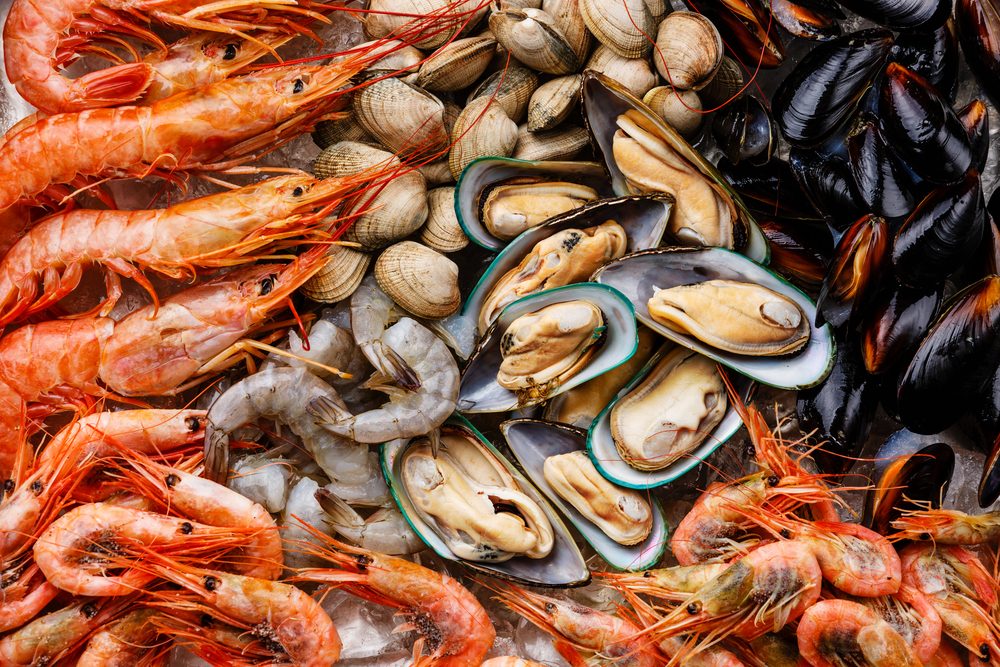 In 2013, Oceana—an ocean conservation group—released research revealing that 44 percent of the 674 retail outlets they visited (including sushi venues, restaurants, and grocery stores) were selling mislabeled fish. Supermarkets accounted for 18 percent of that fraudulent seafood. Before you blame your local fishmonger, Oceana was quick to point out that it’s difficult to say where the mislabeling occurred: It could have been at the dock, or somewhere down the supply chain before the fish arrived at the store. The group found substitutions of cheaper farmed fish that were being sold as wild; also for sale: species with health advisories due to high chemical content. 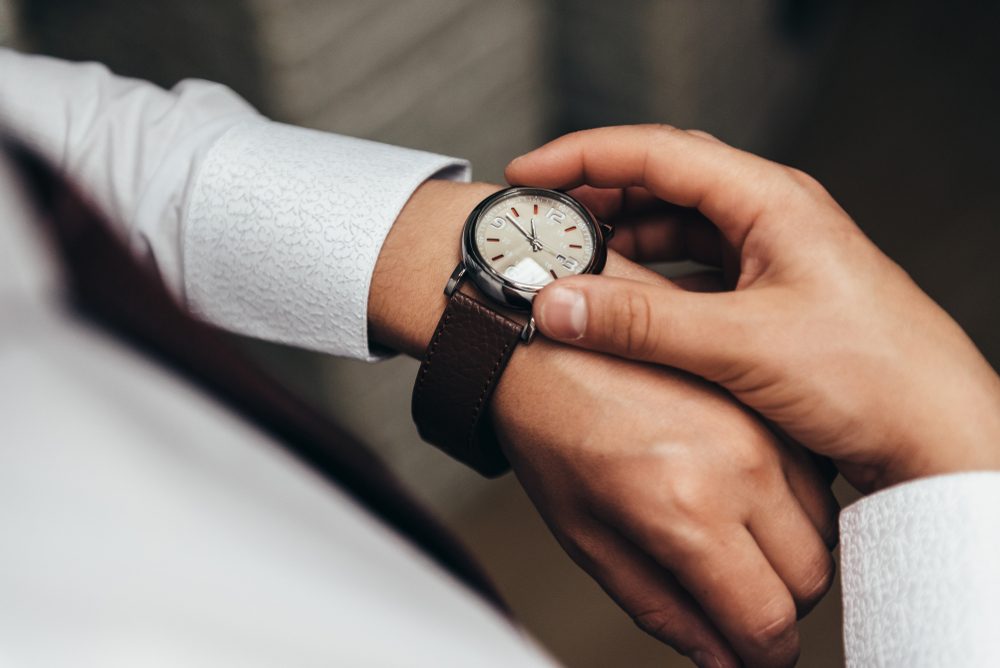 It pays to be an early bird

Grocery stores typically get their produce deliveries in the morning, according to food site Chowhound. If you’re looking for the freshest items, they suggest you get to the store by mid-morning, when the department has just been restocked for the freshest fruits and vegetables. 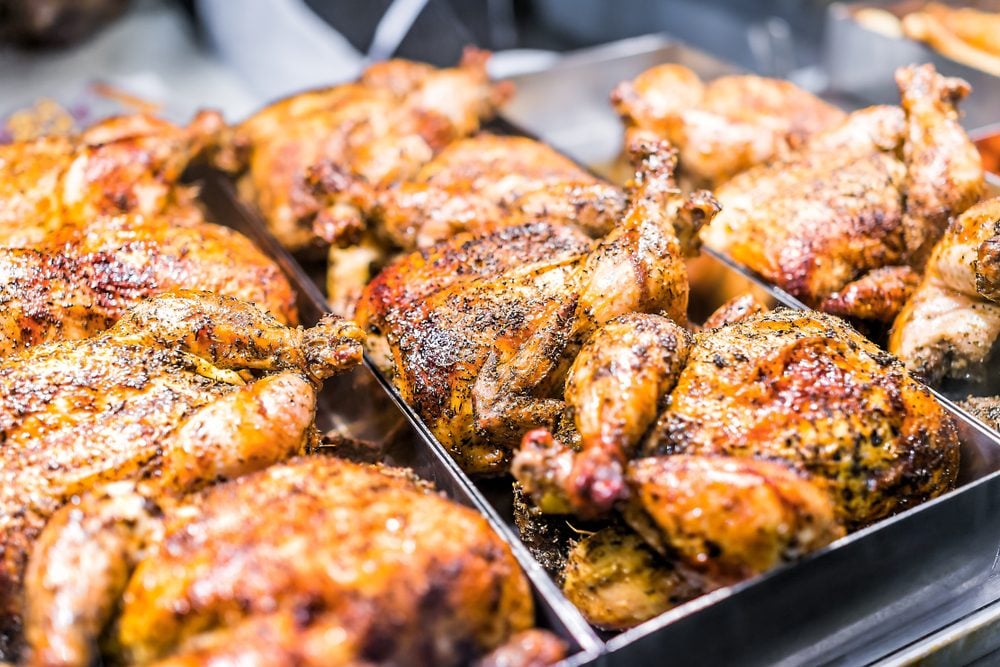 Old and expired food is given a second life

How do grocery stores manage to sell those delicious rotisserie chickens for so little? The answer is right there in the poultry department: Stores often take whole chickens near their expiration date and cook them up before spoiling to avoid food waste. They sell them to shoppers as a convenient dinner option. In addition, supermarket consultant David J. Livingston told The Atlantic that vegetables and meats are often used for in-store deli and salad items before they go bad. 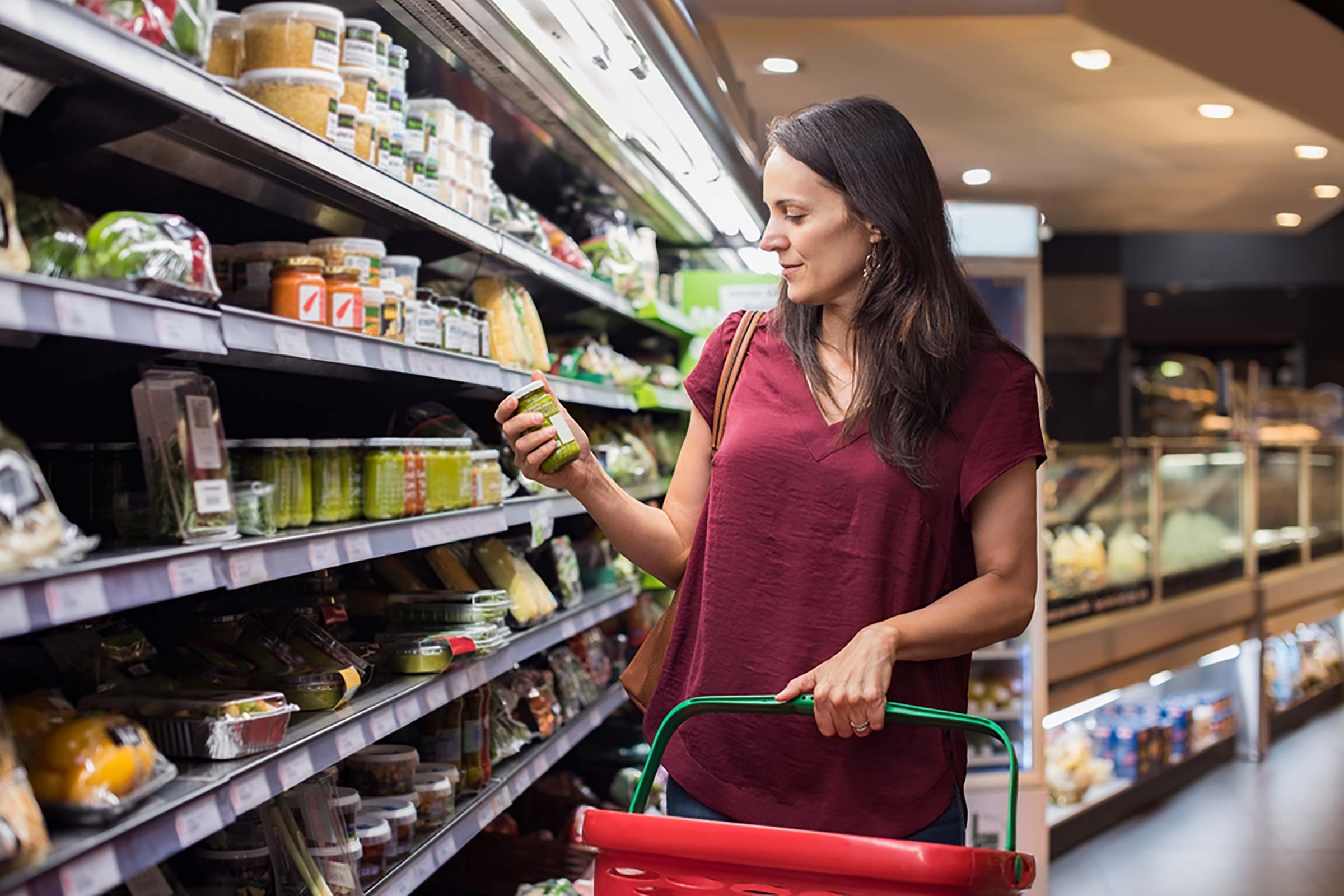 You’ve heard of top-shelf liquor at a bar, but in grocery stores, the shelves with the most expensive items will be right in front of your face. Less expensive items can be found both below and above, according to How Stuff Works. Find out which purchases are better to buy in smaller quantities.