As cruises do their utmost to avoid a repeat of early 2020, the world of cruising will look quite a bit different as ships set sail again. 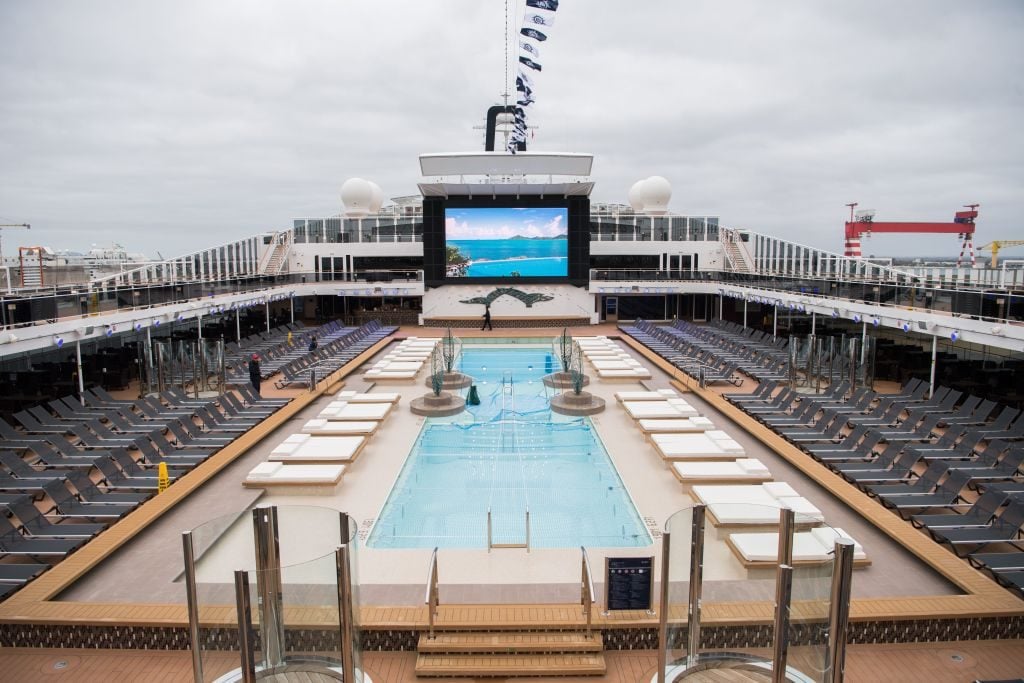 Get on board with these changes

Before lockdowns became a reality in the United States, cruise ships provided a disturbing preview of what was to come. From the 14-day quarantine of thousands of people on the virus-stricken Diamond Princess ship in February to harrowing stories of cruise ship workers confined to their tiny cabins for months, these news bytes left people wondering if, or perhaps why, anyone would ever take a cruise again. In April, the Centers for Disease Control and Prevention issued a “no-sail order,” which they then extended in mid-July—and then again in early October. Now, cruise ships will be docked at least through October 31.

This doesn’t apply to all ships across the board, though—just ships with the capacity to carry 250 or more people, and only in waters subject to U.S. jurisdiction. So, as a turbulent summer ends, some smaller cruise lines are starting to sail again. Others, however—including major carriers like Royal Caribbean, Carnival, and Disney—are continuing to wait for months to come. Whenever, if ever, you choose to go on a cruise again, here are some things you and your fellow passengers won’t be able to do. Of course, these will vary quite a bit by cruise line and individual ship, but these are the general things experts think you’re likely to see change. Plus, check out these things polite people never do on cruises. 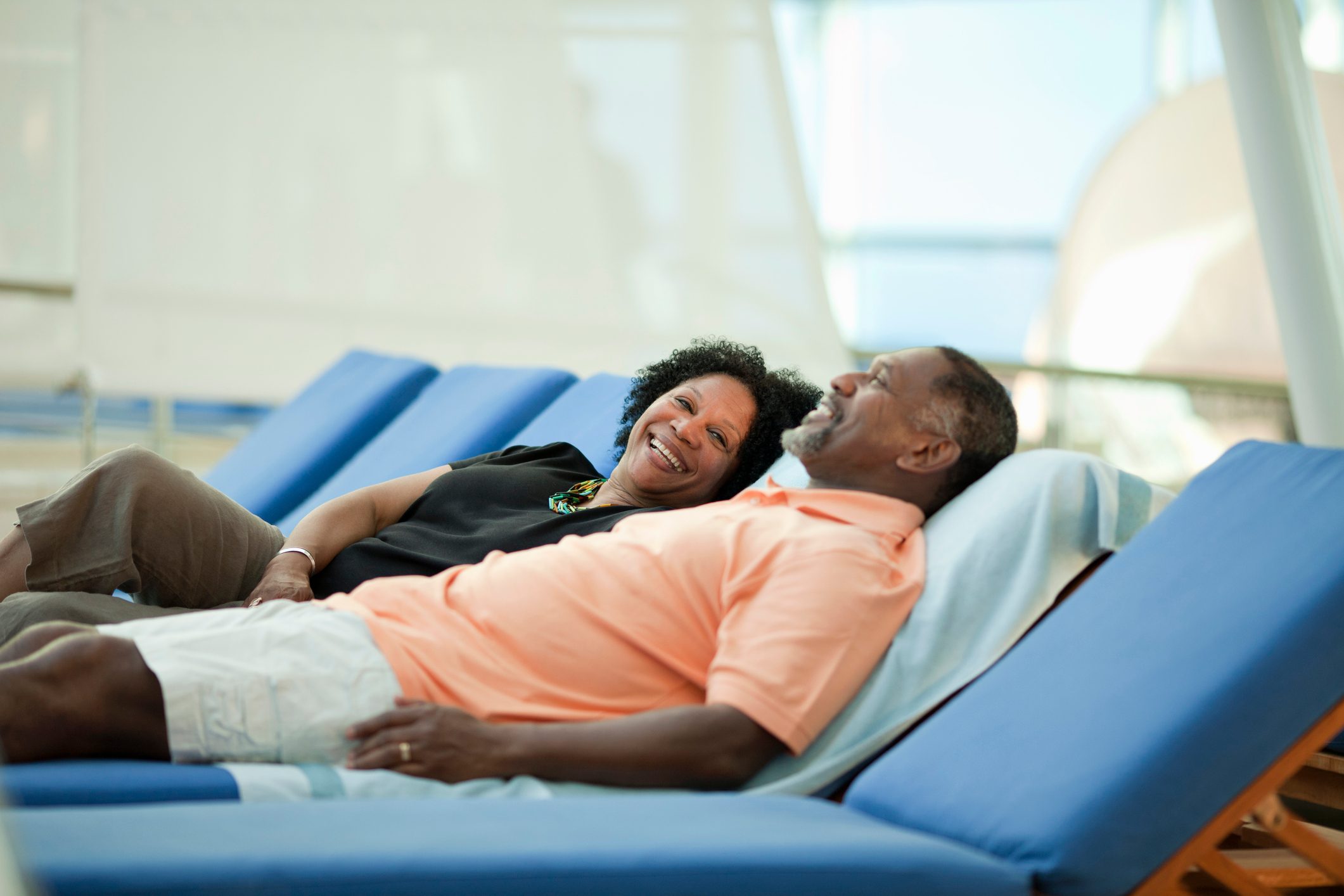 Face coverings are going to be a reality for a long, long time. It goes without saying that you won’t be able to board a cruise ship without one. “You may not be able to fully cruise without a mask,” says Dr. Terika Haynes, owner of Dynamite Travel. While you likely won’t need to wear it constantly on the ship, “for public events, entertainment, and activities in public spaces, guests may be required to wear their masks.” You’ll also likely need them for checking in and boarding the ship. 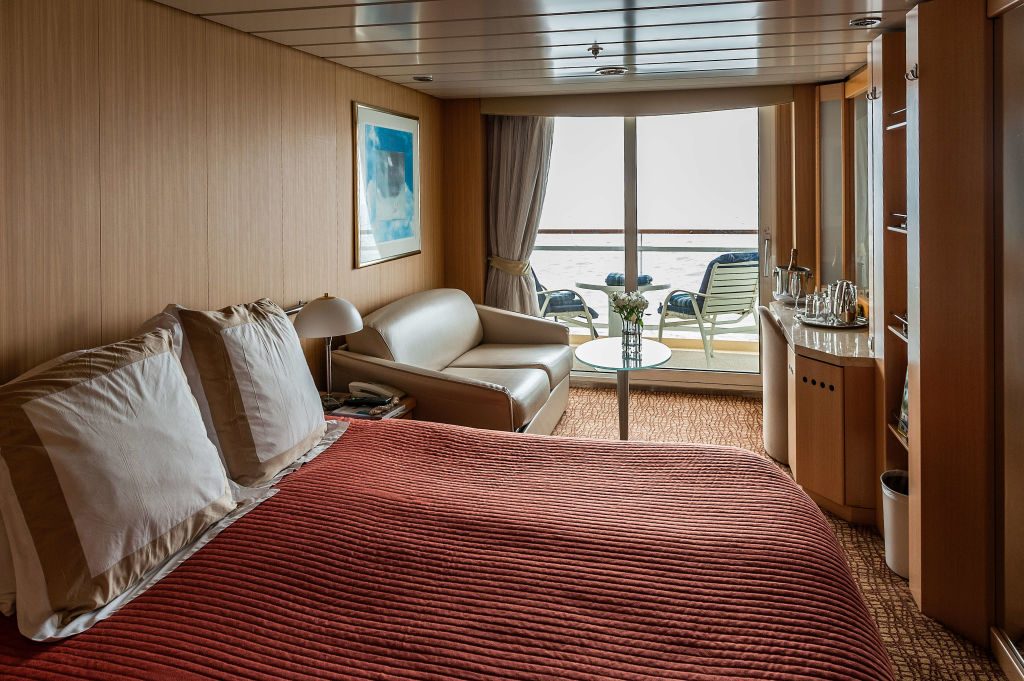 Enter your cabin right away

The boarding process will likely be a little different than cruisers remember. For one thing, boarding will probably be staggered so that all passengers aren’t boarding, or exiting, the ship at the same time. And Dr. Haynes adds that once you get on the ship, you might not be able to go to your room immediately. “Staterooms will probably undergo more of a thorough cleaning between sailings, including steaming of mattresses, sanitation tablets, etc.,” she explains. Consider taking a trip on the most trusted cruise line in America. 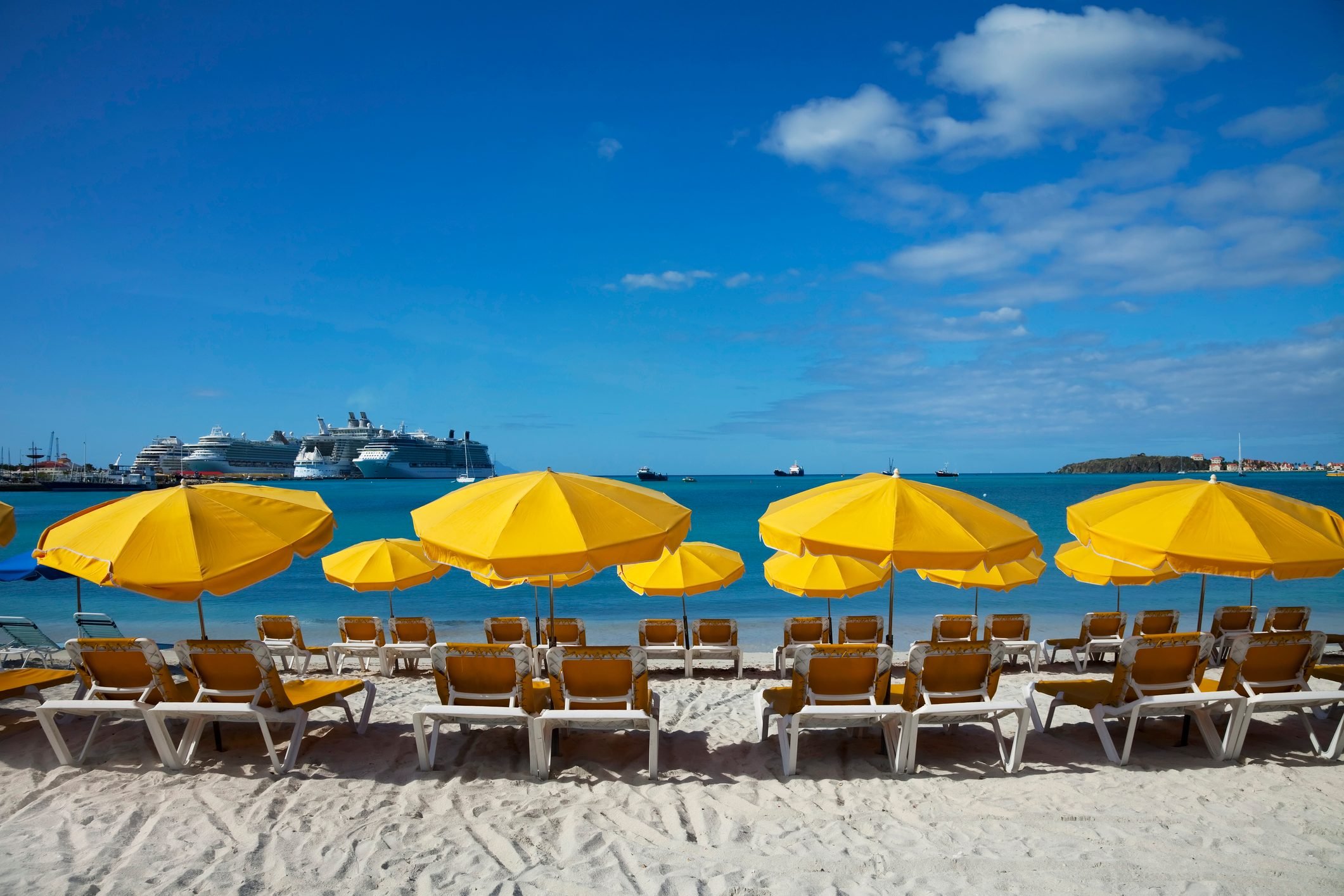 For many cruisers, the shore excursions are the best part of the vacation. But unfortunately, they will likely be seriously limited for the foreseeable future—if they happen at all. After all, the last thing cruise companies want to do is infect the population of a port that’s hosting them—and some ports, which don’t want that either, might not allow cruise ships to dock. And on the flip side, someone living there could infect a ship passenger, rendering all of the ship’s safety protocols irrelevant. “There may be reduced options for tours at ports, and passengers will likely have to practice safety measures at the locations they visit,” says Edgar Arroyo, president of travel rental company SJD Taxi. “It’s likely that requirements will vary widely between ports, and passengers may find themselves having to comply with differing guidelines in different locations.” Here’s what you need to know about getting sick on a cruise ship. 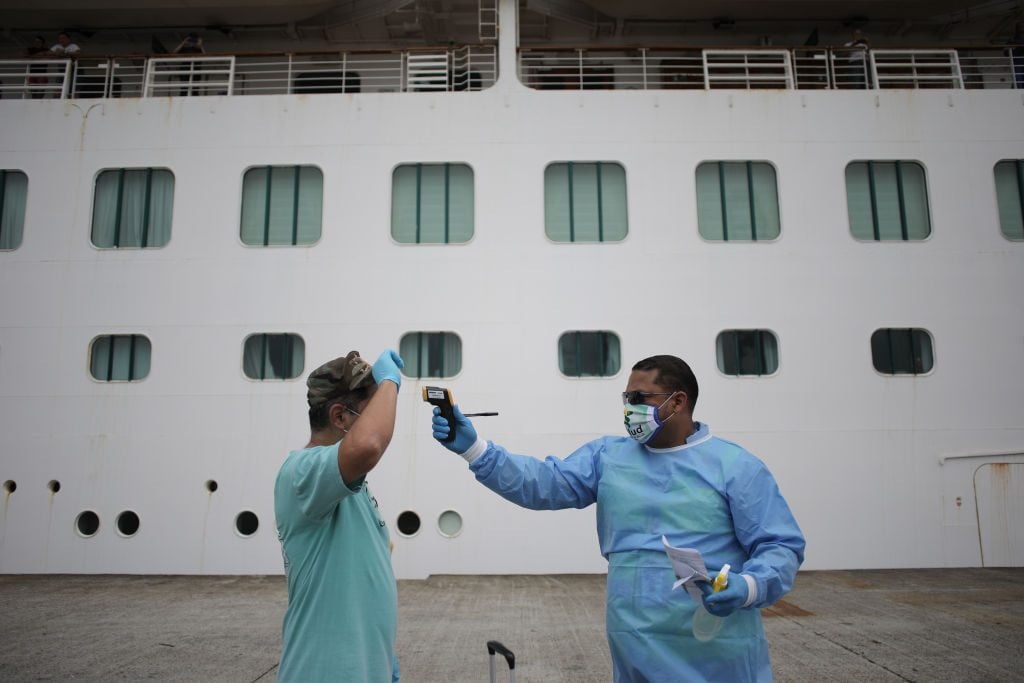 Board without a health screening

Yes, you’re usually required to provide some health information before boarding a cruise. But during and after COVID, health and safety check-ins will likely be dialed up to 11. Passengers will have to answer detailed health questionnaires, undergo temperature screenings, and possibly even get a COVID test—and if they don’t meet the health requirements, they won’t be allowed to board. Dr. Haynes even suggests that some aspects of check-in or check-out could go virtual to ensure an easier, less crowded process. These are 14 things that could stay virtual forever. 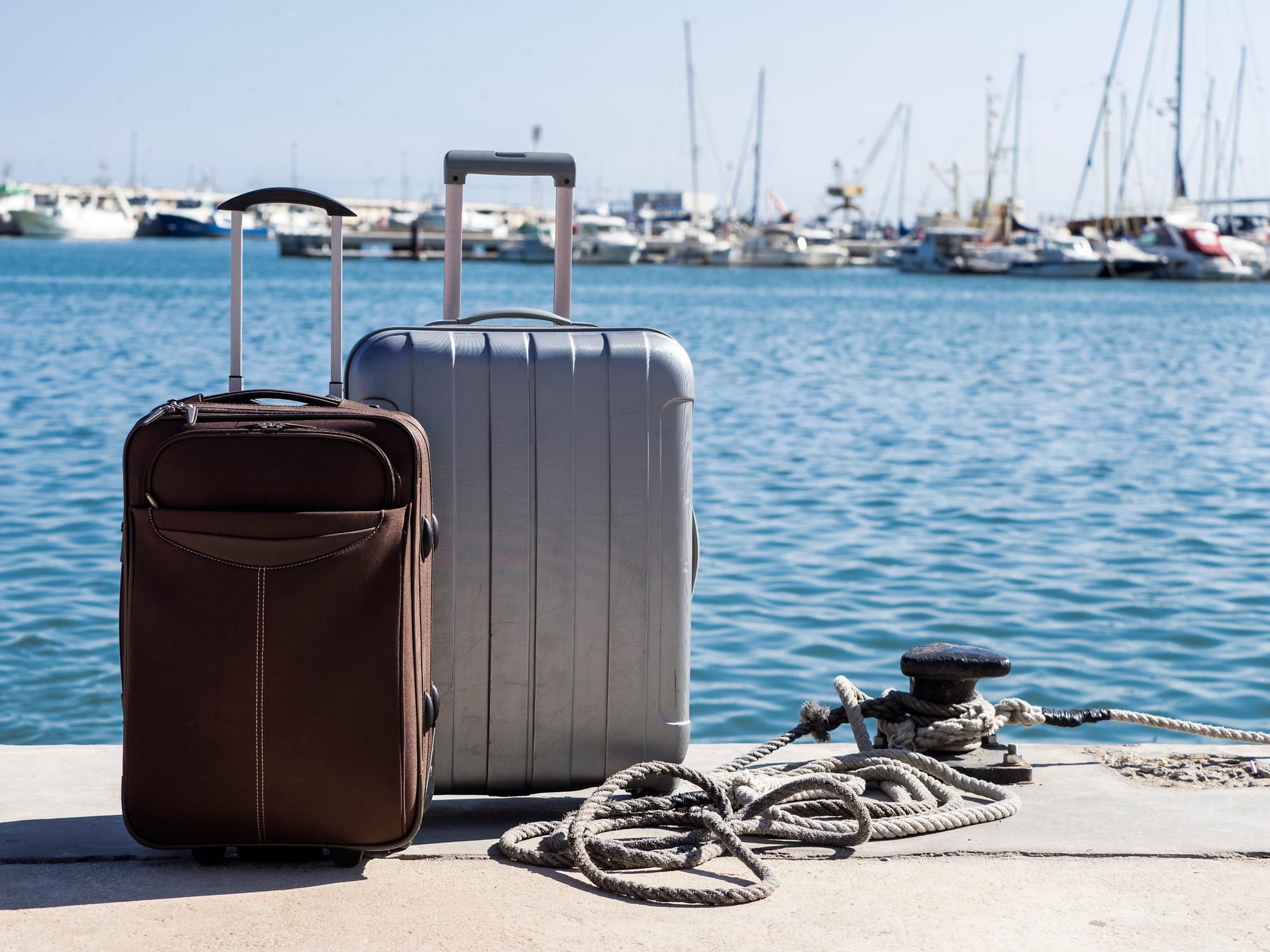 Bring your luggage on board

Of course, you’ll still be able to take luggage on board with you. You just might have to part ways with it before you board the ship, similar to the way you do on a plane, so that it can undergo a sanitation process. “Travelers’ luggage may be immediately disinfected at check-in/embarkation,” Dr. Haynes says. There’s even been rumblings that passengers will have to hand over the clothes that they boarded in for a deep cleaning on some ships! By the way, how bad are cruise ships for the environment? 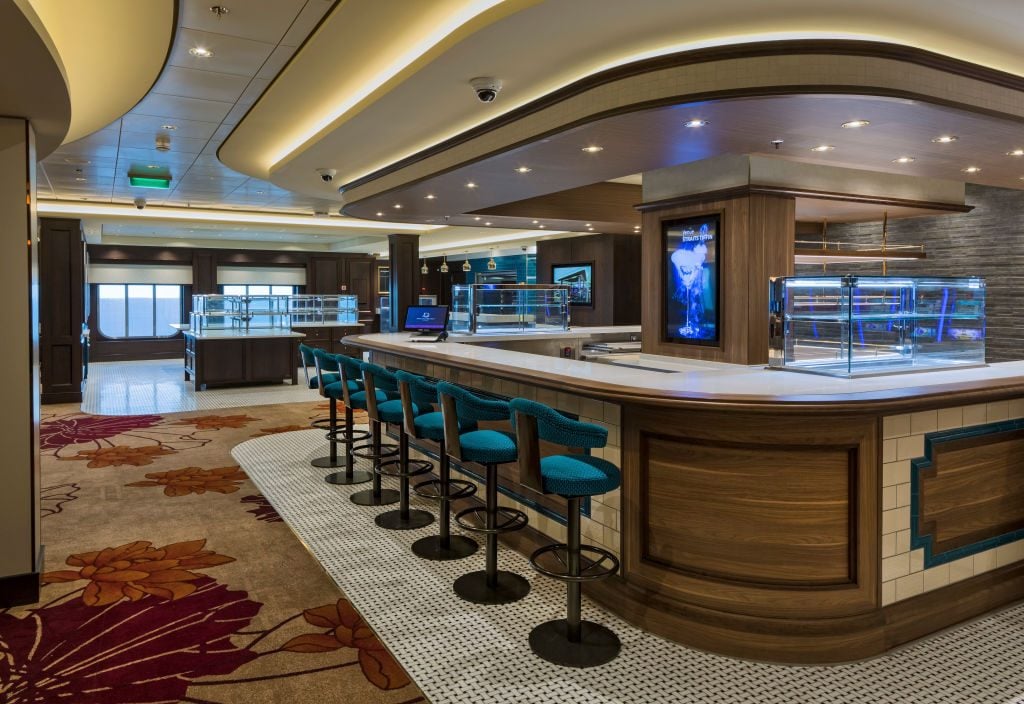 You can’t do this on land, either, so this shouldn’t come as a surprise. Ships, in general, will be less crowded than usual; Arroyo predicts that ships will operate at 60 to 70 percent capacity. “This means that cruises will be less crowded, so that passengers can practice safe distancing measures,” he says. Sure enough, this means that six-foot distance markers will be fairly omnipresent on the ships. In particular, social distancing will be especially enforced in indoor spaces. “You may not be able to enjoy restaurants, theaters, bars, kids’ areas, etc., with the same amount of people as done in the past,” Dr. Haynes says. “[These spaces] will have a reduced maximum occupancy to allow for social distancing.” Here are some more ways restaurants will be different in the future. 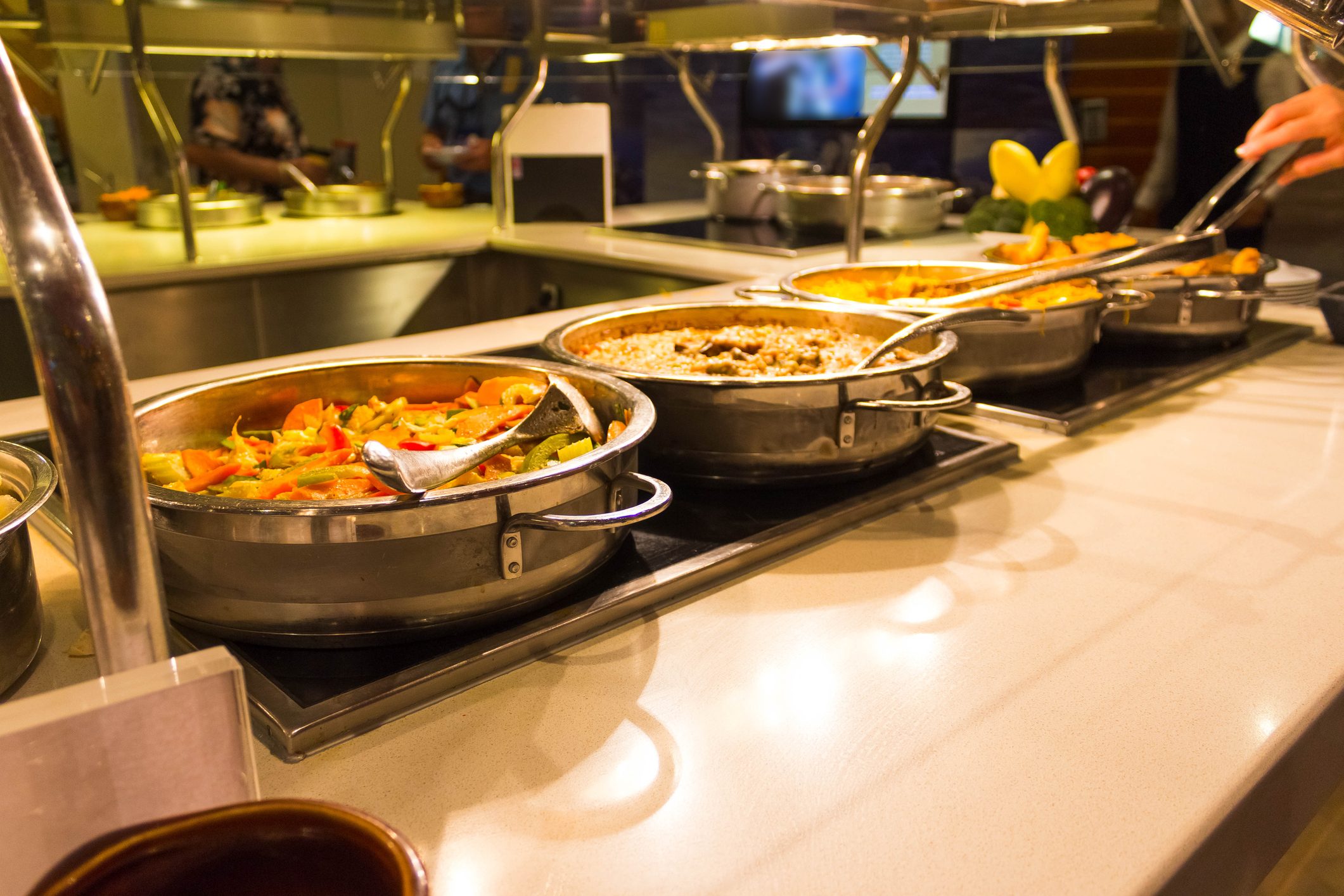 It’s no secret that buffets, a hallmark of cruises, aren’t the most hygienic. Cruise passengers for the foreseeable future won’t be able to serve their own food, to reduce potential germ spread. “Some companies will completely eliminate the buffet concept,” Dr. Haynes says. “Others will still offer buffet options where the staff will serve you the food instead of you serving yourself.” Arroyo adds that mealtimes might be staggered, so you won’t be able to eat whenever you want. Plus, find out some things you won’t be able to do on airplanes anymore. 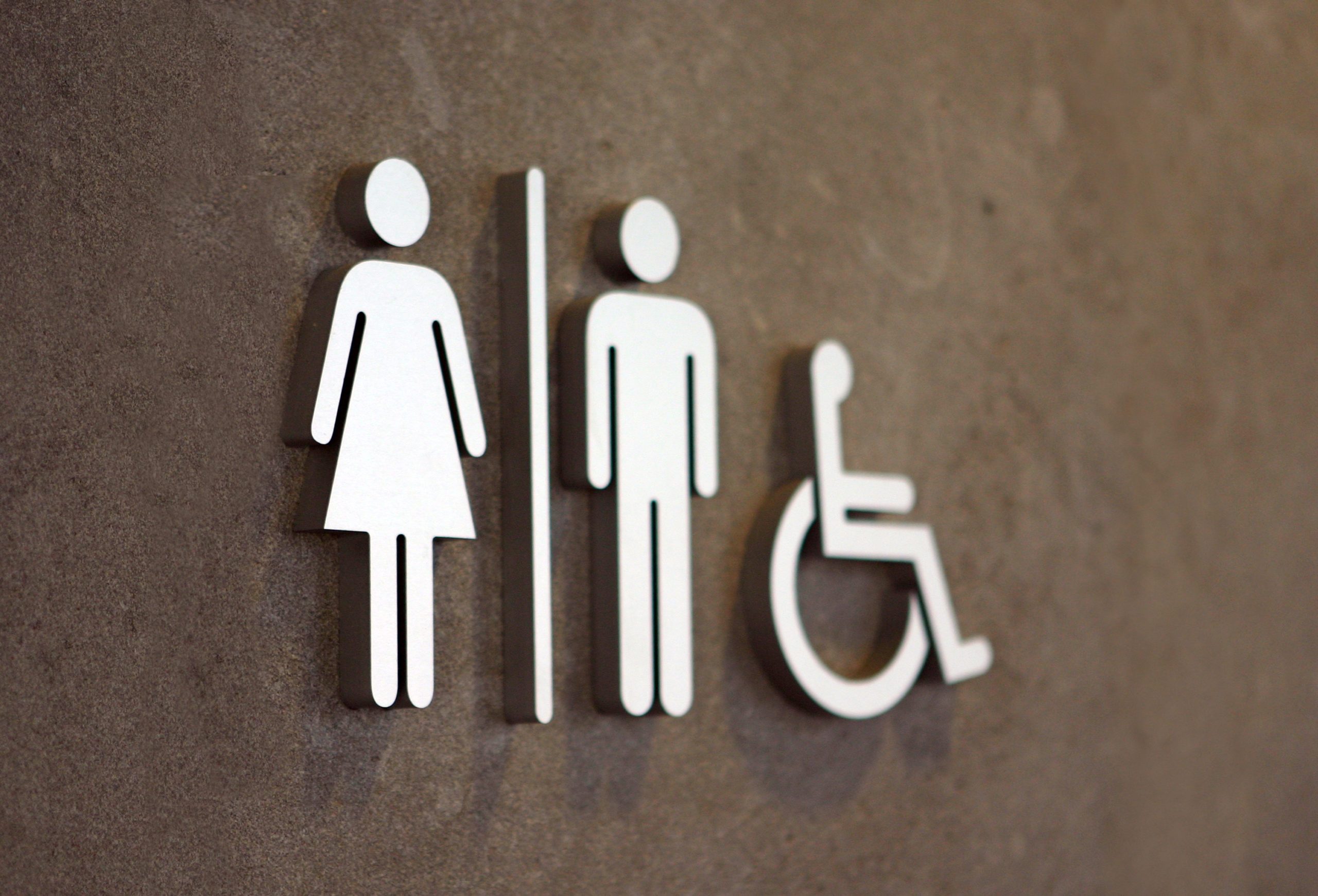 Cruise lines will likely encourage you to stick to using the bathrooms in your rooms, Arroyo says. He says that “whenever possible,” passengers will be encouraged not to use bathrooms in public areas. However, “there may be more sinks made available so that passengers can regularly wash their hands.” Washing your hands is definitely one of the best ways to stay healthy on a cruise. 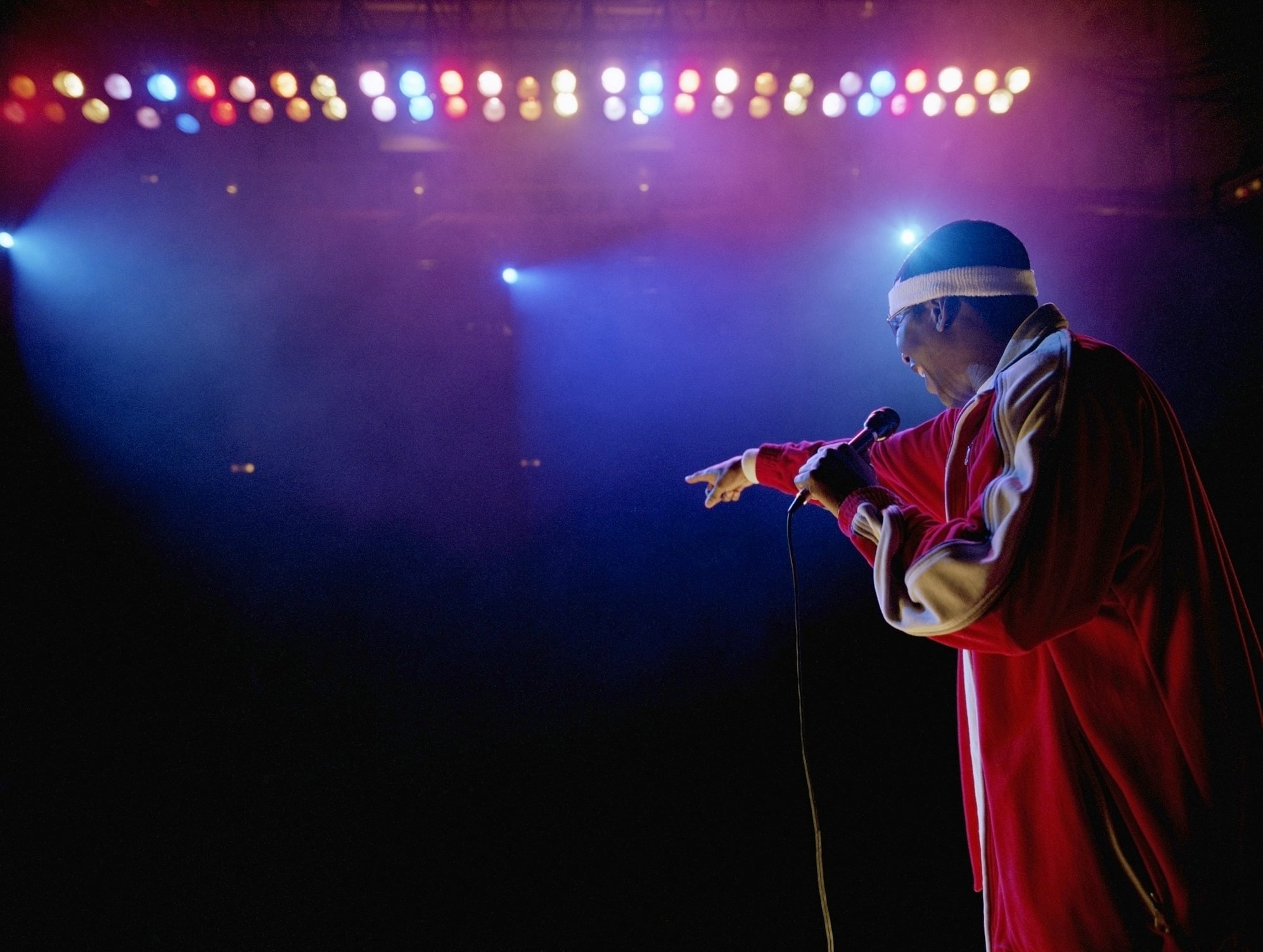 Sadly, concerts and live theater will be one of the last things to return as we adjust to a post-COVID world, and cruises will be no exception. Ships may not hold indoor shows at all, and if they do, the theaters will likely have a vastly reduced capacity. Here’s why one cruise lover won’t stop taking cruises despite the virus scares. 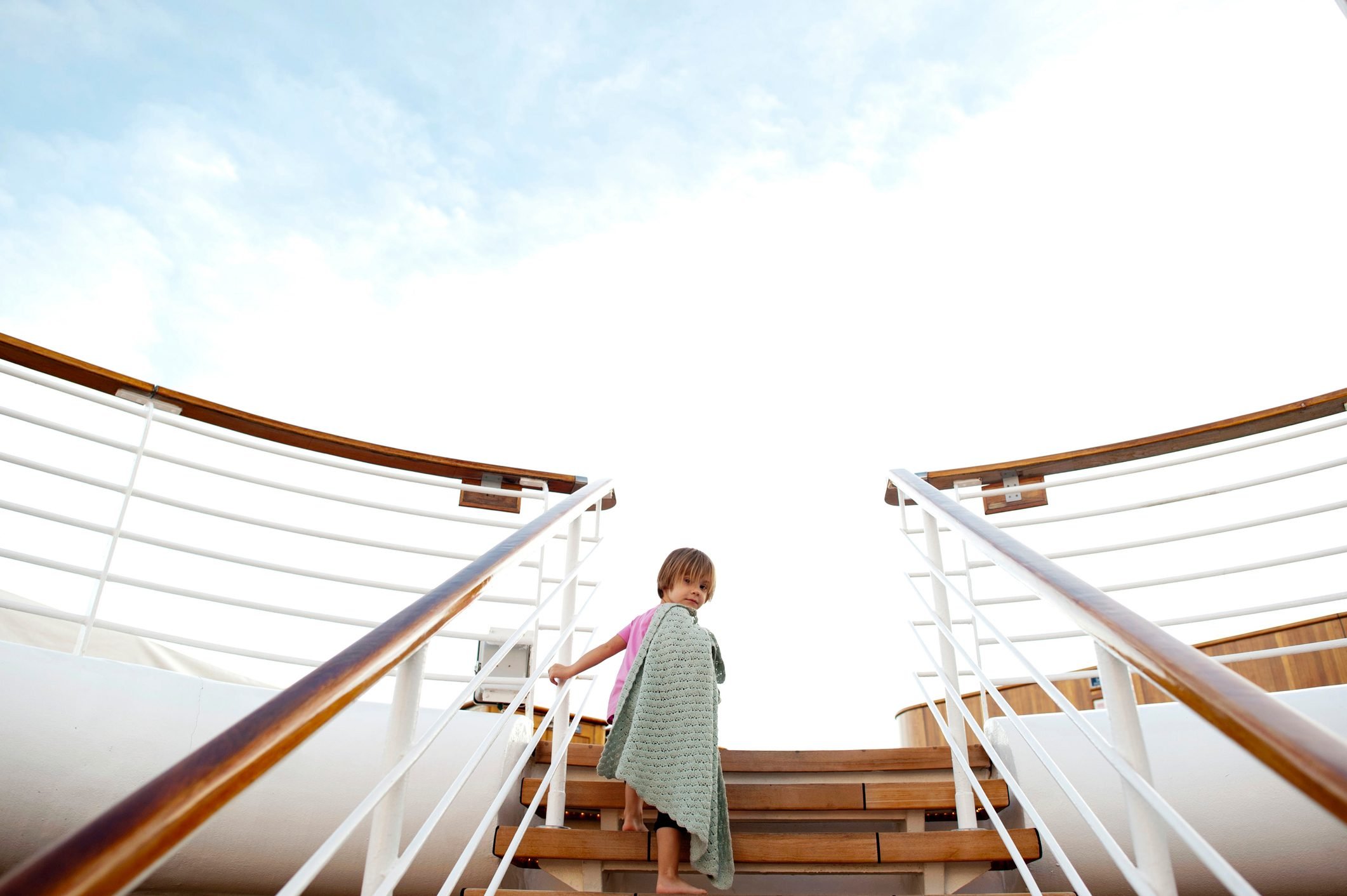 Grab whatever equipment you want

Amenities on cruise ships will not be widely available the way they used to, especially when it comes to items that multiple people might touch over the course of the cruise. Arroyo predicts that shared equipment, like for activities, will “only be available on request instead of being made freely available. For example, passengers may have to request gym mats or tennis rackets that have to be sanitized before.” 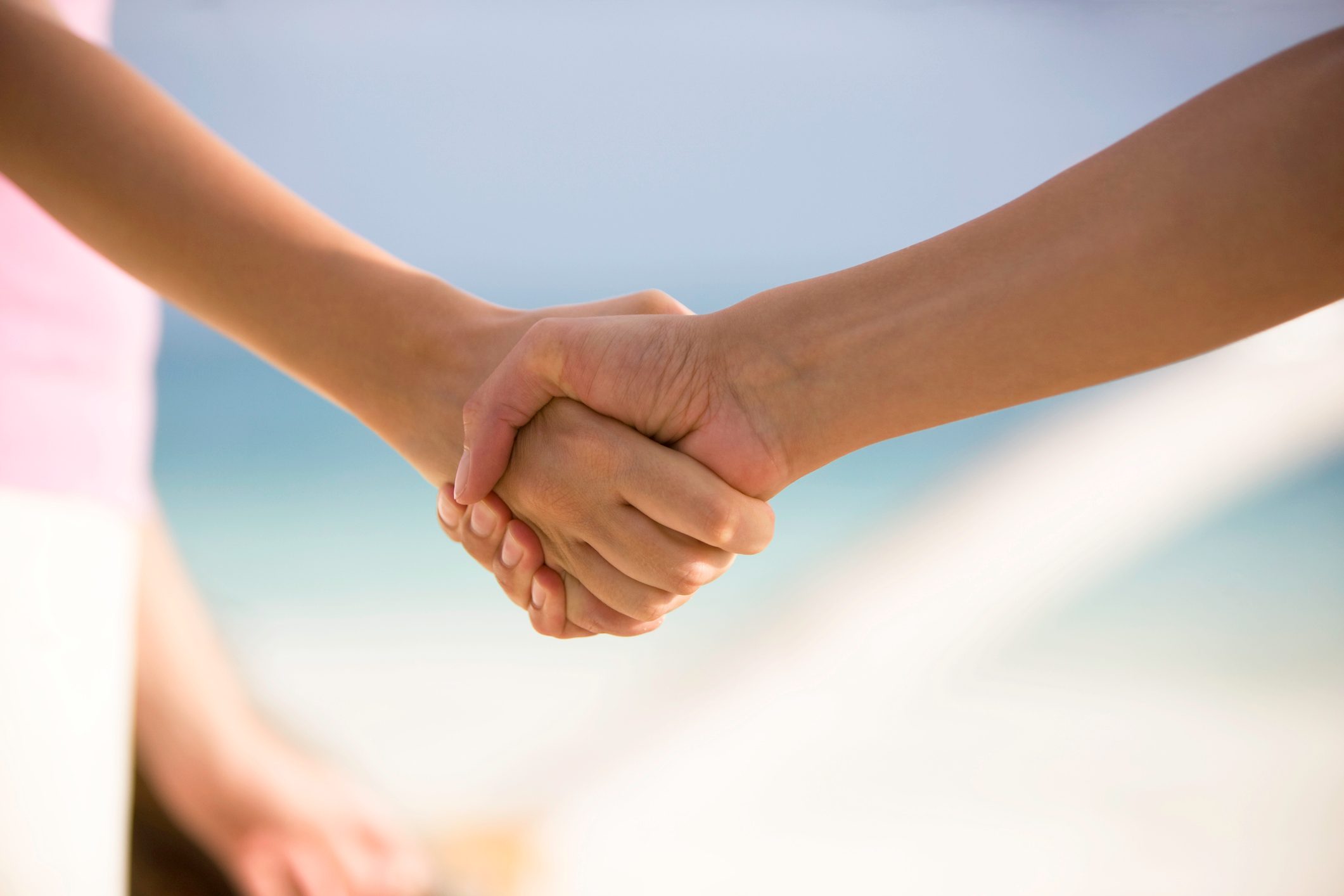 Gone are the days of shaking hands with your cruise’s captain or any crew members, at least for the time being. However, that doesn’t mean you won’t still be able to meet them! Travel Journalist David Yeskel, aka The Cruise Guru, has found that Windstar Cruises in particular has come up with a cool alternative to hand-shaking. On this cruise line, which has suspended all sailings through the end of 2020, “crew will use a new ‘Windstar Wave’ hand signal:  a ‘W’ made with thumbs and index fingers,” he says. “Guests, of course, will be encouraged to respond in kind.” Next, find out more ways cruises will change after coronavirus.