Types of RVs: How to Find the Best One for You

Exploring the country in your own RV can be an ideal way to travel—if you've got the right one. This handy guide will make sure of that!

Vacations can be expensive. Flights, rental cars, and hotel rooms can seriously eat into your budget. There is another way, though: Ditch the plane, and bring your room with you on the road in a recreational vehicle! Pack the fridge with your own favorite foods and you won’t be at the mercy of sketchy or pricey restaurants along your route, either. Ready to go? Not so fast. One glance at an RV dealer lot or website and you might feel overwhelmed. There are a ton of different choices, but which one is right for you? Read on for ideas about which types of RVs match the needs of you, your family, your budget, and what type of camping you’ll be doing. Then make sure you don’t make these mistakes that shorten the life of your RV.

The first question you need to answer before deciding between the different types of RVs out there has to do with what’s currently in your driveway: Do you have a pickup truck, van, or SUV? If so, you might be a candidate for a towable RV. From a compact pop-up trailer or a teardrop to a fifth-wheel travel trailer, there are several options for RVs that can be towed behind an appropriately equipped tow vehicle. Camping World, one of the largest chains of RV dealers in the United States, suggests narrowing down your choices by deciding whether you’d like to drive the RV or tow it behind a vehicle you already own. Let’s start with a look at motorized RVs.

Class A motorhomes are generally the largest type of RVs available. They typically have most of the luxuries and conveniences of home and, therefore, often cost as much as a home. Usually ranging from 21 to 40 feet long, these large motorhomes can be roughly the size of a bus and depending on how they’re equipped, they can sleep up to six people in style. Most of these motorhomes also have one or more slide-out sections—a portion of the RV that, with a touch of a button, expands to create more interior room while it’s parked. Often called “pushers” because most have their engine in the rear of the RV and the engine pushes it down the road, these vehicles have extra room up front where the driver sits and a big flat windshield.

Newmar is a popular manufacturer of Class A motorhomes, and their RVs feature many different choices in size and amenities. One option is the Bay Star. Since these types of RVs are so large, many owners choose to tow a smaller car behind it for short trips once they’ve parked. That way, if you’ve found a perfect camping spot in a national park for a few days, you won’t risk losing it when you run into town for supplies.

This is one of the types of RVs you might want to live in—permanently. Check out this story of a couple who lives in an RV year-round. 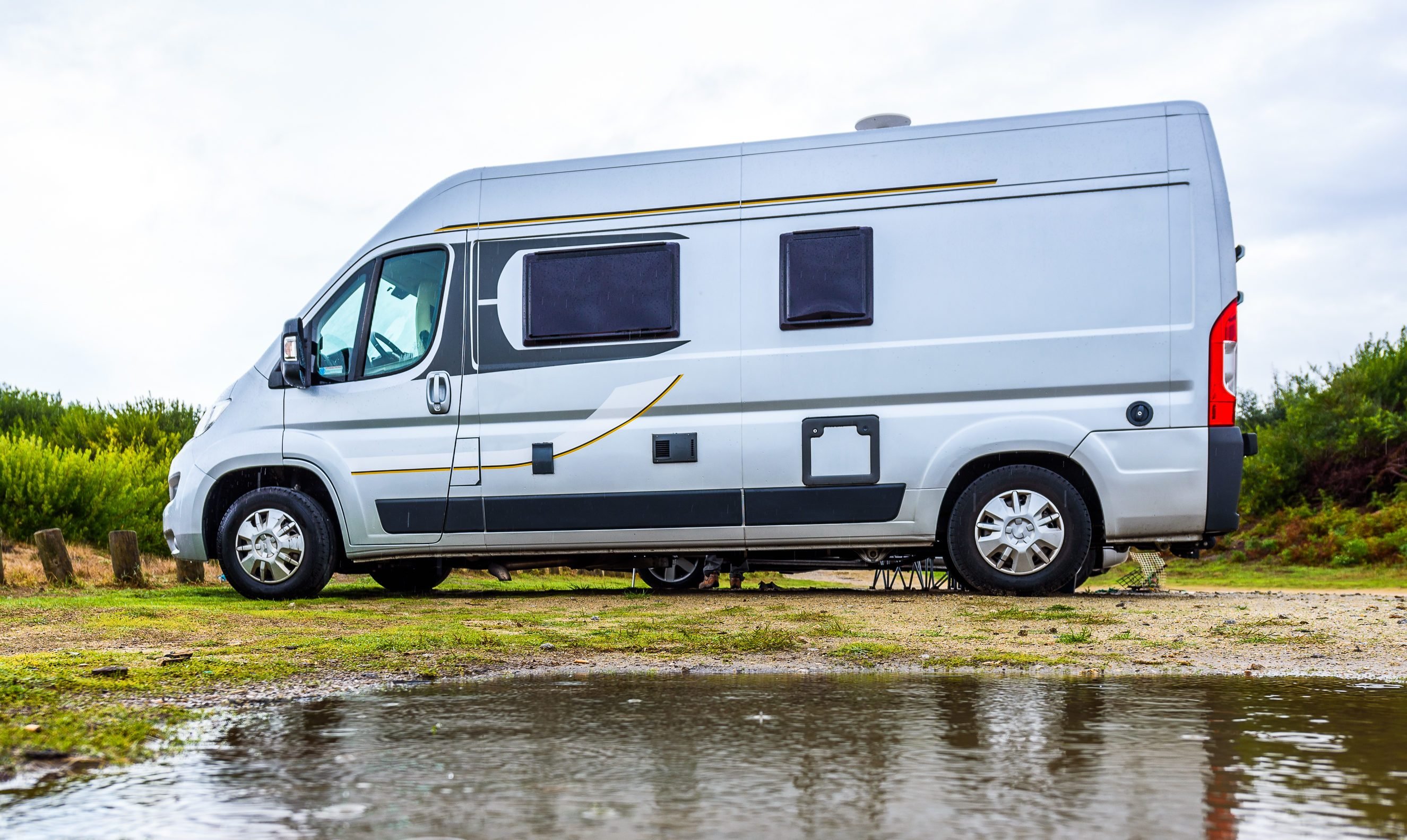 Class B RVs are a bit smaller than Class A motorhomes, as they are based on a van. Often, they will have a raised roof so you can stand easily while inside. (It’s no fun trying to prepare a meal while hunched over with your head pressed against the ceiling, after all.) These will typically have beds, sinks, and toilets that fold away into custom cubby holes and nooks to maximize space.

These RVs can often sleep up to four people, but since they don’t have slide-out sections, they’re generally more comfortable for couples or solo adventurers. As they are relatively compact, they drive much more like a passenger vehicle and are easier to park in small campsites. If you blanch at the thought of maneuvering something the size of a city bus, the Class B might be perfect for you.

The legendary Winnebago brand is well-known for its Class B motorhomes. The Solis is a new model with a pop-top roof, which allows for additional fresh-air sleeping space. Need some RV-travel inspiration? Try these 15 best places to camp in national parks.

A nice blend of the best features of Class A and Class B motorhomes, Class C RVs are built on the frame of a typical truck or van but have a section behind the front doors that is wider than the standard cab. Class Cs will also often have a sleeping area over the driver’s compartment. They also usually offer slide-out sections for even more sleeping room; some models sleep up to eight people. Class Cs, much like Class As, generally have a private toilet compartment, making nights in remote campsites a whole lot better since you won’t have to find an outdoor latrine with a flashlight.

Thor is a leading manufacturer of Class C motorhomes, and you’ll see many campsites across the country lined with van-based Thor Chateaus, since they’re both affordable and spacious. Make sure to put these 15 incredible American campsites on your bucket list. And if you’re looking to save some money on your trip, here’s how to find free overnight parking.

The bumper-pull name is a bit of a misnomer. Typically, trailer hitches are mounted at roughly bumper height, not to the bumper of your tow vehicle. Anyway, depending on your family’s needs, a bumper-pull travel trailer could very well be the ideal type of RV for your next vacation. You might already use a perfect tow vehicle for your daily commute, and if that’s the case, just hitch up the trailer and go! These can be seriously large trailers, and some have slide-outs for extra space. They’ll also have a full kitchen, bathroom, and even a dining area, depending on the size.

One of the most iconic bumper-pull trailer brands is Airstream. The Airstream Caravel sleeps up to four and pulls behind a number of midsize SUVs, making it a great choice for many families. Plus, you’re not sacrificing style for function: The stainless steel exterior oozes old-school class. 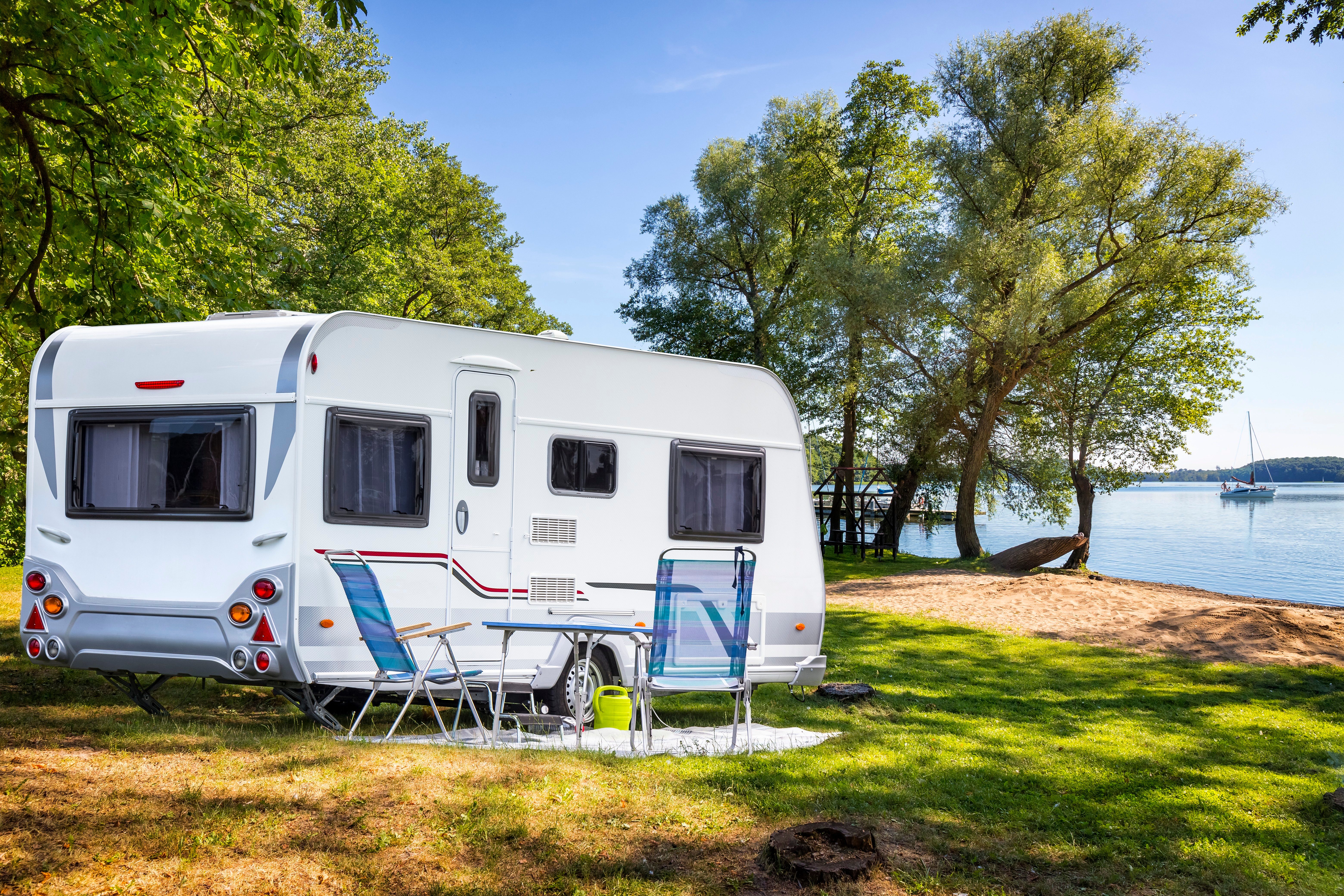 Toy haulers, sometimes called sports-utility RVs, have a section toward the rear that is basically a garage. Depending on what type of gear you want to bring with you on your adventure—mountain bikes, dirt bikes, snowmobiles, kayaks, or ATVs—there is a toy hauler that will fit your needs. The rest of the trailer works just like a travel trailer, with room to sleep, eat, cook meals, and relax away from the elements.

The Forest River No Boundaries travel trailer line is a cool choice for outdoor enthusiasts, as the models are all built with higher ground clearance and a rugged suspension meant to tow your toys well off the beaten path.

What’s the right type of RV if you’re on a somewhat tight budget? Pop-up trailers are an affordable way to take the family camping. They are lightweight, and they fold down into a low trailer that can be hauled behind most cars. Once deployed, the fabric or canvas sides act as a large tent on wheels. It’s a much more rustic camping experience, as there is typically no heat or air conditioning to keep you from the elements, but hey, it keeps you from sleeping on the ground! Plus, these are an inexpensive way to travel and see America. Once you’ve arrived at your campsite—perhaps at one of the best RV parks in every state—you can drop the trailer and head out to get food for the fridge or catch the sunset at the perfect Instagrammable spot.

Teardrop trailers have been around for a long time, because they are simple, inexpensive, and have an enthusiast following. Some teardrops can be little more than a tiny bedroom on wheels, while others will have more amenities like a swivel toilet, sink, and folding beds. As they are small, lightweight, and aerodynamic, these can easily be towed behind many midsize SUVs. Be sure to read the owners’ manual for your vehicle to ensure that your trailer doesn’t exceed its maximum towing weight. Looking for a new SUV to go along with your new teardrop trailer? Check out these 16 best family SUVs under $32K.

If you already have a pickup truck, you have a bed! But you need more than that when heading out on an adventure, so a slide-in truck camper could be the perfect type of RV for your needs. It can be easily moved in and out of your truck bed, so you aren’t hauling the bedroom around during the week when heading off to work. Slide-in truck campers come in especially handy when you go fishing or hunting; once you get to your destination, slide out the camper and drive off in search of your quarry.

When you’re shopping for your slide-in camper or any other RV, consider a used unit to save some money. RV Trader is a website that consolidates classified ads for RVs for sale across the country. It also offers suggestions on making that RV truly yours—for example, redecorating the interior of an older RV so that it feels like new.

#Vanlife: Build it yourself

If you’ve spent any time on social media, no doubt you’ve stumbled upon the #vanlife hashtag, dedicated to people living much of their lives on the road in a converted passenger van of some sort. Often, these vans have been thoroughly customized by the owners themselves, who make a point of building a vehicle uniquely suited to their needs.

It’s a movement that traces its roots back to the Volkswagen Type 2 Microbus, which was popular among the itinerant Deadhead followers of the Grateful Dead. The custom van scene of the 1970s contributes as well, as these modern #vanlife builds have all kinds of homey touches…though most don’t have shag carpeting anymore. Really, though, #vanlife is just another of many types of RVs—just a do-it-yourself RV for a generation of people ready to hit the road, explore the wonders of America, and embark on iconic adventures in the state of their choice. If you want to camp on a budget, here’s what you should know about free camping in the United States.

Chris Tonn
Chris Tonn is an automotive and transportation expert with years of work in the automotive manufacturing and service industries, as well as a decade of automotive journalism experience. For RD.com, he covers automotive repair and recreational vehicles.