The Soulful Chicago Book Fair brings together authors, book lovers and families in one of Chicago’s most underserved south side neighborhoods.

In a neighborhood that is changing because of institutional expansion and gentrification, a significant literary event began last summer in Woodlawn on Chicago’s South Side. The first of its kind literary event drew more than 3,000 visitors to peruse and purchase the works of 100 African American authors writing in a variety of genres. The Soulful Chicago Book Fair featured writers who have well-known works, award winning books, as well as new authors hoping to get discovered.

As one of the authors, I was most impressed with the enthusiasm of the visitors and especially the families who brought their children to see themselves in the myriad of children’s books. This is a renaissance in literacy and in the promotion of literacy in a great city!

Asadah Kirkland, a local author, founded the Soulful Chicago Book Fair in 2015. Each year, residents and authors gather to share in their love of reading. Nothing brings more joy to the community than seeing a child’s face light up as they open a new book full of characters they can relate to and identify with. It’s also an opportunity to reunite with old faces and make new friends.

One woman witnessed an endearing exchange at a young author’s booth. The little girl wrote a book about police officers and a group of them stopped by to take a photo with her. It was like she had her own little fan club.

People are just happy to experience new titles and talk to people who are writing for a variety of reasons. I welcomed many young people to engage in discussions of African American history and found that children are not that well versed in their own history. It’s as if they stopped teaching history in schools. And that’s a shame because if you don’t know your history it’s difficult to know where you are going.

What do you think of Soulful Chicago Book Fair in Chicago, IL? 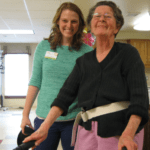